So, I finally got to play a little D&D with the fam—starting what I hope is a campaign through the Dungeon Delve.

The mayor of Adventure Town stepped into Floyd’s Coffee House (a popular place for adventurers and their potential clients to gather) and asked the adventuring party to investigate the disappearance of the two militia members he sent to investigate the new mine being excavated by the dwarf, Coppernight. They readily agreed, and set out immediately.

So, I messed this first battle up, because I forgot to give the kobold slingers their turns. Oh, well. I will probably add extra slingers to the next encounter. With six PCs, adding monsters is necessary, anyway. I also drew the map wrong.

The PCs are: a human warlord, a Dragonborn fighter, a half-elf warlock (star pact), an Eladrin paladin, a tiefling wizard, and an elf ranger. 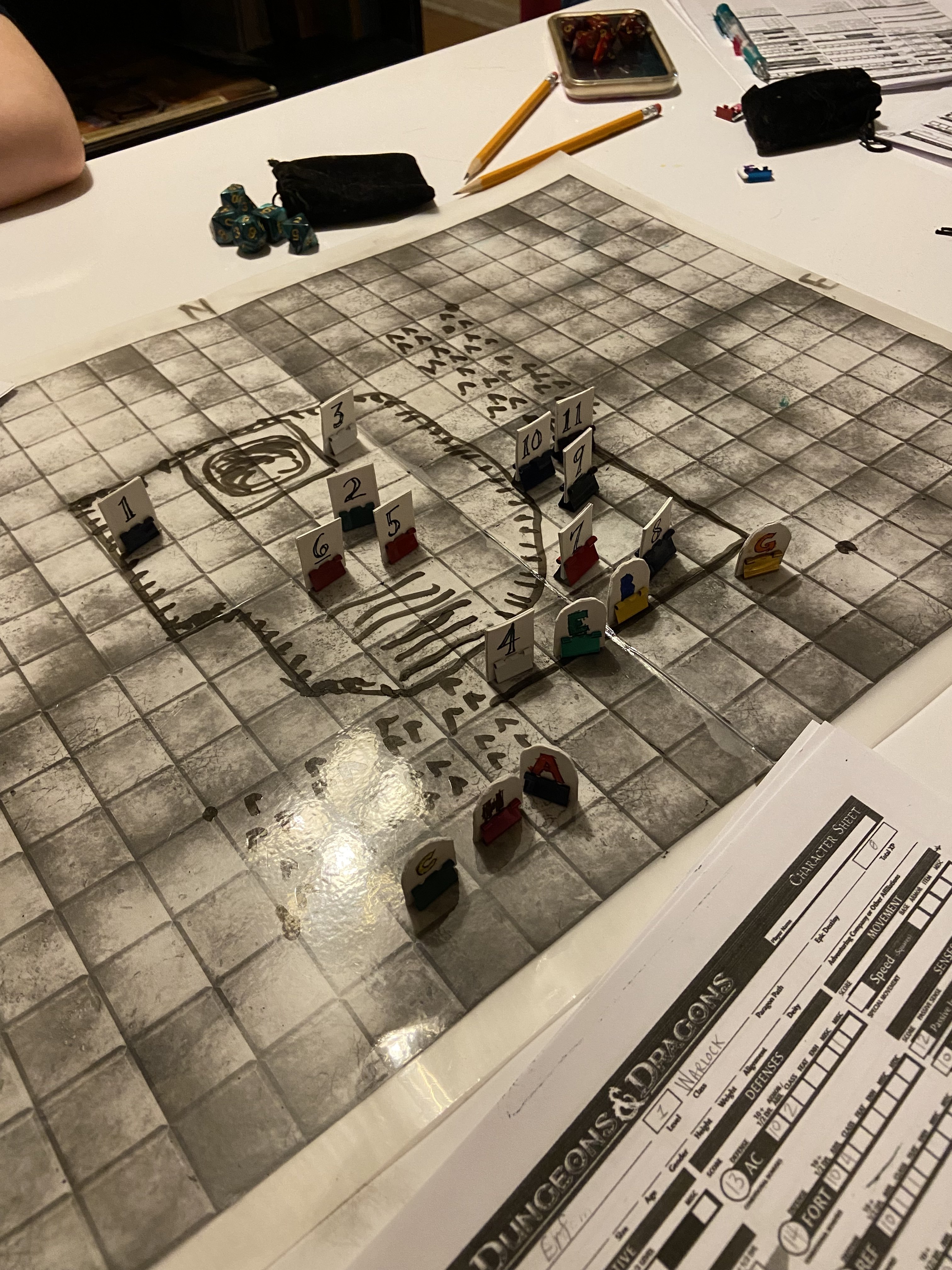 To begin with, the warlord and the fighter scrambled up the side of the fence to have a look. The paladin tried, but was unable to climb the fence. The other three PCs moved into the rubble and started taking potshots. The warlord dropped to the ground and took out one kobold (minion), then the fighter took out two more with cleave. The elf took out another one. The kobold minions went next, but barely did anything. The tiefling wizard used scorching burst to attack the slingers (not minions). The starlock laid a curse on the nearest minion, then zapped it with dire radiance, killing it, and so got a +2 to his next d20 roll on his next turn. The slingers were supposed to go next, but I forgot. The paladin moved to where she could see around the fence and, lacking a ranged weapon, picked up a rock and tagged one of the slingers on the noggin. The warlord then charged, leaping into the pit and attacking one of the slingers. The fighter took out the last minions, and the elf and the wizard took out the slingers. The last slinger scurried down the rope ladder into the dark pit.

It was time for me to get something to eat. Our cat offered to take over DM duties: 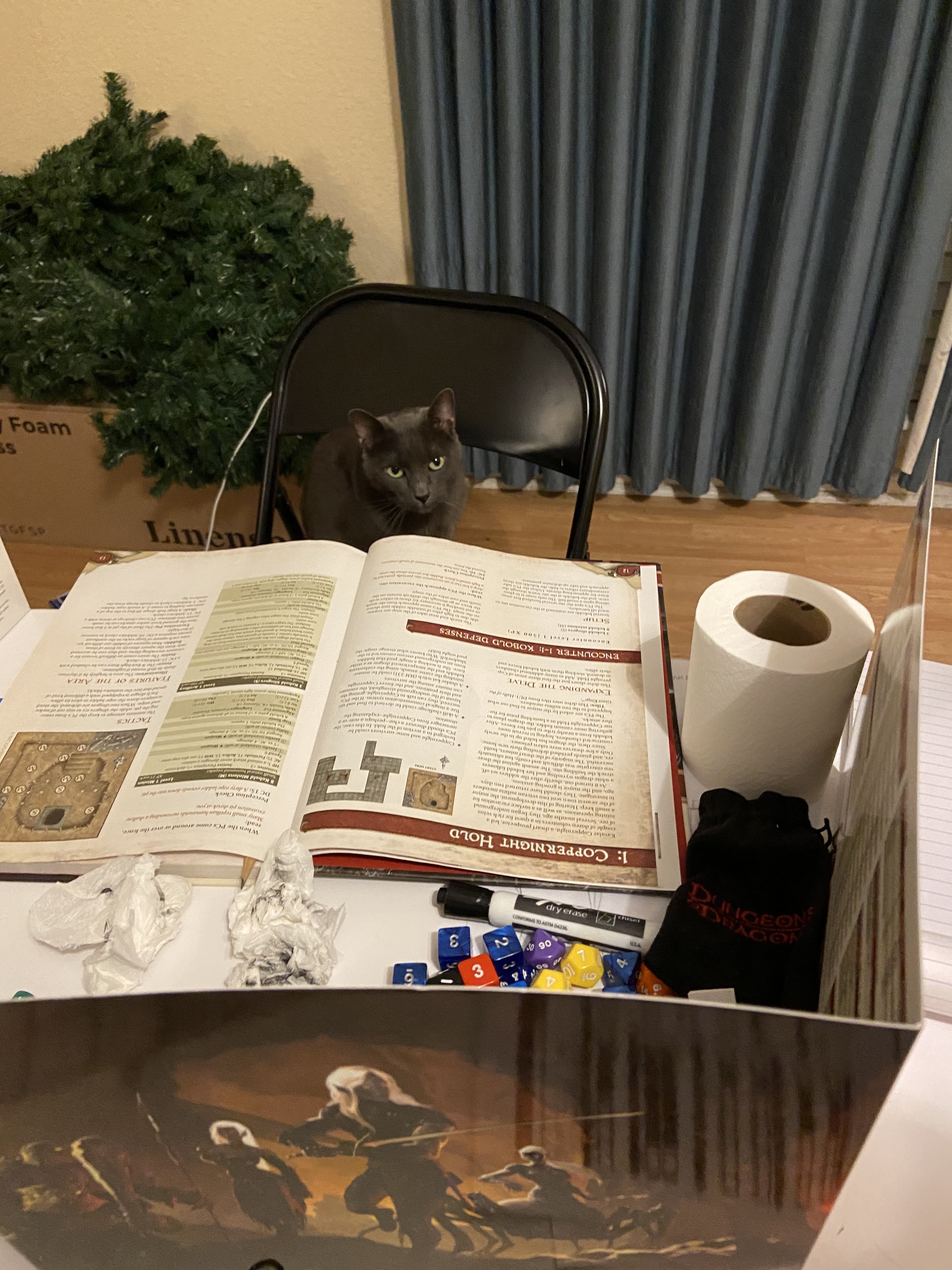 but the warlock needed to hit the hay, so we wrapped up for the night.

Next time (who knows when that will be—hopefully next week, sometime), the adventurers descend into the dark pit. I plan to add things, like pages from Coppernight’s chewed up journal, which will tell the tale about some monster that is lurking in the darkness.

Eager to read the continuation !

No time for the next area in Coppernight Hold, but I am playing through the Essentials Red Box adventure with one of the tax deductions. The character is an elf storm cleric.

Some of the powers are a little different than they are in the Heroes of the Fallen Lands manual.

I really like these power cards that were included with the set. Did you know that you can purchase the pdf of the 4th edition Essentials Red Box, but that images of the power cards are not included? The set is unplayable because of that. One could get HotFL and substitute the powers from that book (they’re very similar, except for the thief powers), but one of the coolest mage powers in all of 4e would be missing: Slimy Transmutation. A 1st level mage could theoretically turn Orcus into a toad. The witch (from “Heroes of the Feywild”) has a similar spell, but it’s fifth level (I think), and is nerfed, compared to “Slimy Mutation”.

D&D 1E N1 Against the Cult of the Reptile God (AD&D 1E) and N2 The Forest Oracle (AD&D 1E) released in POD format on DriveThruRPG!