We have just finished our longish 10 year long Werewolf (WoD) campaign and we choose our next adventure to be The Famous Zeitgeist AP.
But since we don't have firm grasp on 5e rules i thought that prequel would be good thing to do. So people will be more aware of classes and rules and have some ideas what kind of characters they would like to play.

One possible adventure would be the Sunless Citadel module. That sunken fortress could be something that belonged to the ancients (orcs). I thought it would be nice to see some murals of dragons swearing loyalty to orc seers. That ravine could be below the standing stones of the Old Faith. Maybe its an ancient place of power where ancients experimented with the world binding (Axis seal). And the Gulthias tree is an experiment gone wrong. Later on the world binding petrified trees will be based on the discoveries based here. Maybe that fortress was once bound to some worlds? As for timeline i thought maybe 50 years before the AP start? So that the firearm and the character themes would be available. As for placement, it could be in remote corner of Risur or Ber.

Or alternatively you could suggest any other short adventures that would fit with my purpose. Character creation will be important for them to understand. I assume that my players would like to make new characters for the AP. Adventure has to have some subtle hints about the campaign and flavor.

I played the Sunless Citadel ages ago, and rather enjoyed it as a good intro for new players.

Okay, you've piqued my interest by mentioning the tree could be petrified. How about . . . it's the year 450 AOV, fifty years before the AP. Have the party make characters, with firearms as an option, though maybe no character themes, since several of them don't fit chronologically -- dockers aren't really a thing yet, the book that spawns Heid Eschatol hasn't been written, Risuri arcanotechnology hasn't taken off so technologists don't quite fit, and it's been decades since the second Yerasol War. Perhaps you could curate it to only gunsmith, skyseer, spirit medium, and Vekeshi?

The PCs are in the city of Ursaliña, on the west coast of Ber, which at the time has a heavy mix of orc and minotaur population, working together but certainly still tribal and aggressive. The city is described in detail in adventure 11, though it's got some weird stuff going on at that point. Some fan put this page together: Ursalina, the City of Bears - Storage Bin

They meet at the Jaula (the arena), where there are some animal bouts, and a staged performance where a pile of dragon bones are brought out and shattered to the cheers of the crowd, but the big event is a minotaur tribal dispute, where dark stones are laid on the ground to mark a labyrinth, and two units of five warriors each enter. They're unarmed, but weapons and armor are scattered around the field.

There are penalties for moving stones, crossing over or attacking across a marked line, and similar things that break the illusion that they're actually fighting in a real maze. If a player gets three penalties they're expelled.

That's just a backdrop, though.

They're there to meet an employer, who shows up just as the big brawl is about to happen. It's a tiefling, a young Han Jierre (in his early 20s, idly fidgeting with a gold ring he recently acquired, but with a bit of swagger and charm). He talks while watching the fight, saying he wanted to meet here so the party could see what savagery passes as politics in Ber. Apparently some minotaur chief is trying to consolidate power, and if he wins this battle another tribe will side with him. (This is Shantus, who'll eventually end up as ruler of the nation in adventure 6, but it's just background now.)

Han says they should be attentive to the bloodthirst of the crowd, since they party will be heading through orc territory, and they'll need to be careful not to arouse anyone's anger. His family has tasked him with acquiring magic for Danor, since his nation cannot produce its own, but they've found quite often communities in remote areas know about perilous magic that they would be happy to have removed. Danor has the resources to find a use for these things, even if primitives like these locals don't understand what they're dealing with.

He hires them to scout a chasm called La Arboleda Crepuscular, where legend tells of El Gulthias Arbol, a tree whose fruit can cure any disease. For some reason the locals fear it. He offers money for good information and more for a sample of the fruit. And with some caution he adds that if they see any sign of ancient golden relics, those would be of special interest to his country. (He's hoping the site is an Ancient ziggurat, as per adventure 3, but it's not.)

As the conversation wraps up, the game below is paused as a referee tries to figure out if something counts as a penalty: one side brought their own stones and have been placing them on the ground to create 'new walls,' which they know they can ignore but the other unit are treating as real. The crowd roars with laughter and excitement for the clever trick.

Depending on how involved you want to get, you might showcase a bit of the cultural quilt of Ber, where sure, it's rough and tumble, but clearly Han Jierre is an elitist for calling these people savages. The area has mostly orcs, a fair number of minotaurs, plus a few goliaths who come down from the mountains, and the area the PCs are headed has goblins. As they travel they can see some paddocks of giant goats and other domesticated megafauna. The village of Cerroble (which sorta translates into Oakhurst) needs a teeny bit of fleshing out.

It lies on a route to various mountain villages and a few old draconic mines. There's a Guerro shrine run by a minotaur that offers magical healing but requires people to tell the story proudly of how they were injured in battle; a trading post owned by a Drakran dwarf who sells ammo and a few guns to the tribes nearby; and a retired orc pirate who moved inland and now runs a small hostel. Maybe the dwarf has a male eladrin bodyguard - an old Elfaivaran who was born not long after the Great Malice and had no place in his homeland, so he became part of the Diaspora. He plays no major role in this adventure, but could show up as a contact in Flint when you start the main campaign.

When they reach the actual dungeon location, though, you may want to add a bit more personality to the residents. You'll just have established that the setting has neutral or even friendly cultures, so if you want the party to fight the goblins and kobolds, you'll need them to have some baddies in charge. Belak might even be a Risuri human, whom the people in Cerroble have seen a few times over the years.

Having a white dragon hatchling is . . . potentially rough, canonically. Meepo and his tribe might have managed to hatch an eggs they found and want to protect it, but if word gets out any other Berans would want to kill it. If the PCs kill it, people would laud them.

As for the tree itself, we never really have any vampires in ZEITGEIST, except for - get this - a vampiric dragon named Doverspike who only appears in adventure 12. Seems like an interesting tie-in for Ber, no? So the tree could have sealed a portal to a plane known as Wilanir, the Lair of Discontent. Not sure how you'd convey this information, but there's all sorts of dreams or skyseer visions or lingering spirits bound to the tree, or just iconography that might stick with the party -- perhaps in parts of the dungeon they find old carvings of a dragon emerging from banks of fog. Doverspike is a red dragon in adventure 12, but you could always change him to white if you want the wyrmling to be somehow his long-in-stasis offspring.

I also found some generic advice for running the adventure here: https://merricb.com/2017/03/23/running-the-sunless-citadel-first-steps/

Wow, that is some massive advice! I will take some time to chew it trough.
I owe you my gratitude! /bow

Rahu said:
Or alternatively you could suggest any other short adventures that would fit with my purpose.
Click to expand... 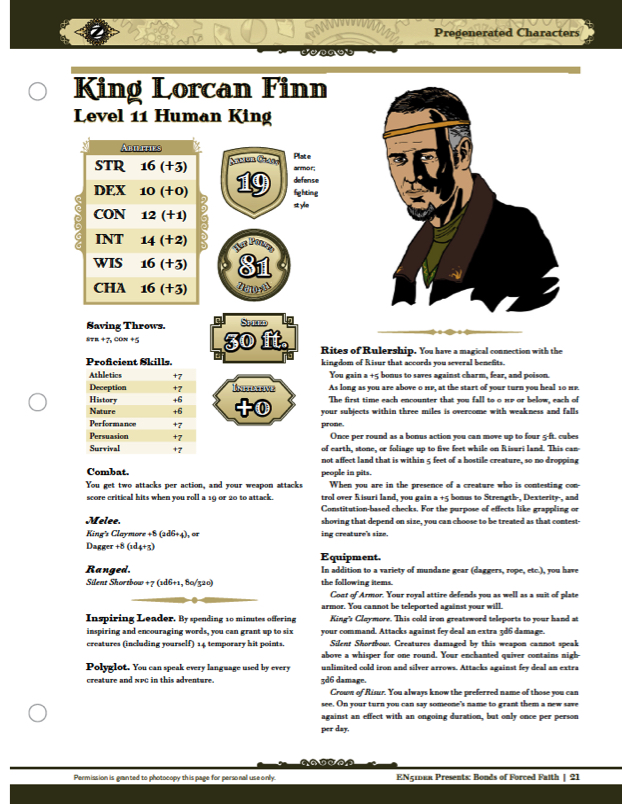 Quite a special item for EN5ider patrons today! This 32-page adventure, Bonds of Forced Faith, is a prologue to the ZEITGEIST adventure path. Featuring a group of pregenerated PCs 100 years before the main adventure path begins, the players play King Lorcan Finn and his retinue which includes...

We did Bonds of Forced Faith, Into the Feywild, and Crypta Hereticarum as prequels all set 100 years prior to the adventure path. They are all for different levels, so did them each as one-offs with different characters. It was a fun way to introduce the world and my players really enjoyed all of them. We are hoping that the main Zeitgeist adventure will start being released on Roll20 soon and plan to play through them all. I've got the whole adventure path and the 5e conversions should be done this fall, but waiting for for a more VTT-friendly format to start the campaign.