John-Matthew DeFoggi described 13th Age Gorantha as "a 400+ page love letter to Greg Stafford’s World of Glorantha, one of the most extensively developed and renowned fantasy settings of all time". Rob Heinsoo's and Jonathan Tweet's 13th Age - a blend of D&D 3rd and 4th edition design sensibilities with a dash of indie storytelling - and Stafford's epic, heroic setting combine into a setting where "epic heroes battle to gain runic power to save the world from chaos." Glorantha, which dates back to the 1970s, has been published for RuneQuest by Chaosium, and HeroQuest by Robin Laws and Stafford, along with various board games, a video game, and a line of novels. 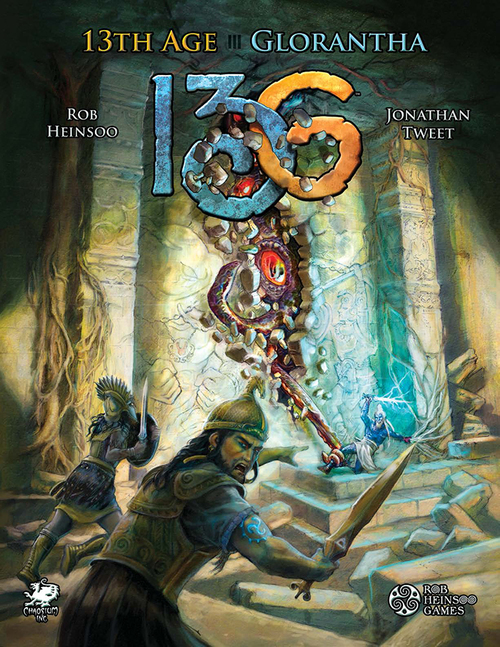 Glorantha is a setting where magic pervades the world. It's a big, detailed setting, with an emphasis on myth and religion. In 13th Age Glorantha (which I'll be calling 13G from this point), PCs use sword forms and berserker abilities, and are blessed by priestesses and warded by spirits. 13G is "unapologetically about fighting monsters, especially Chaos". Runes give players narrative powers, lending the setting some indie-style player control. Publisher Chaosium has has kindly sent over some previews for me to share with you. You can grab the actual PDF here. 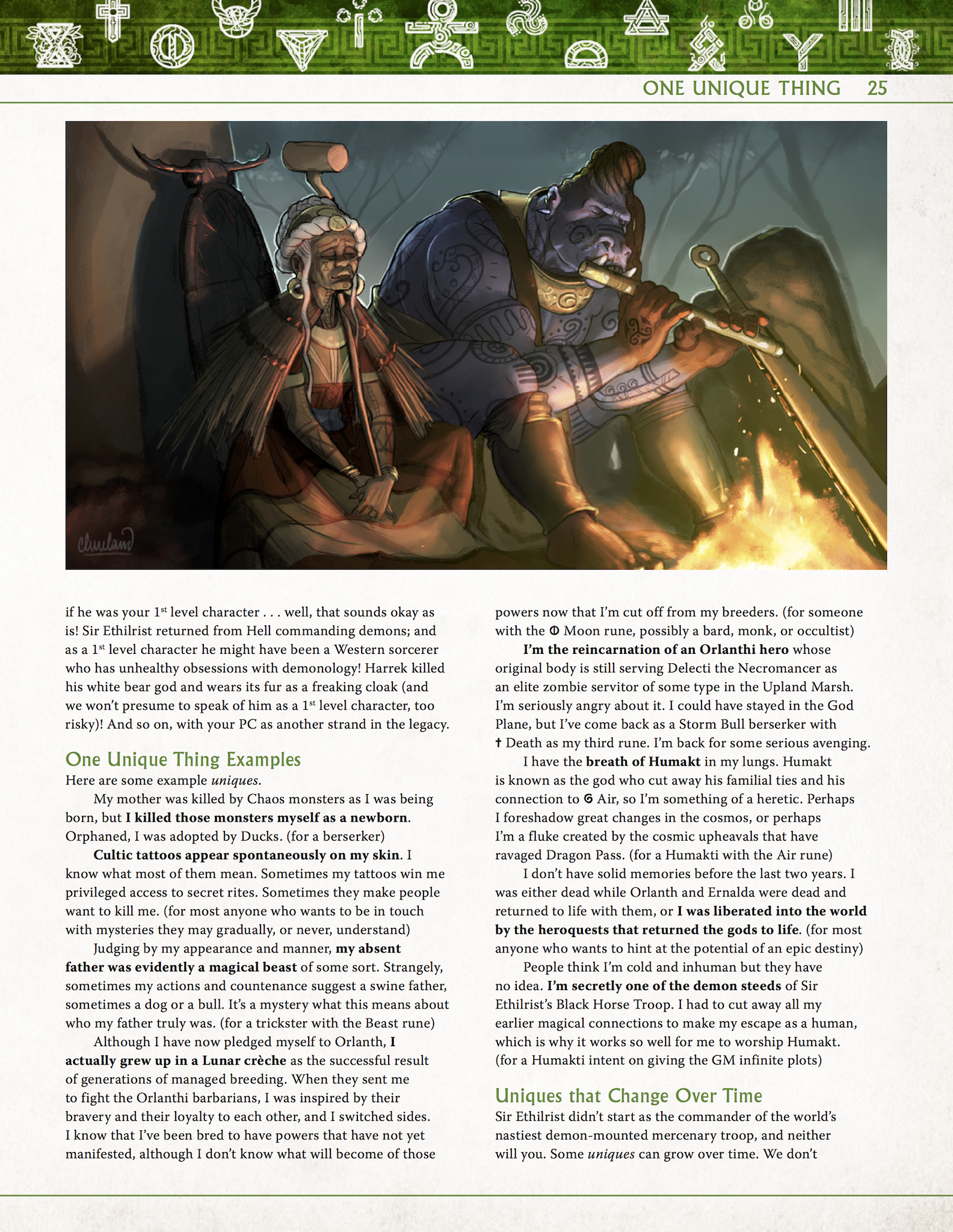 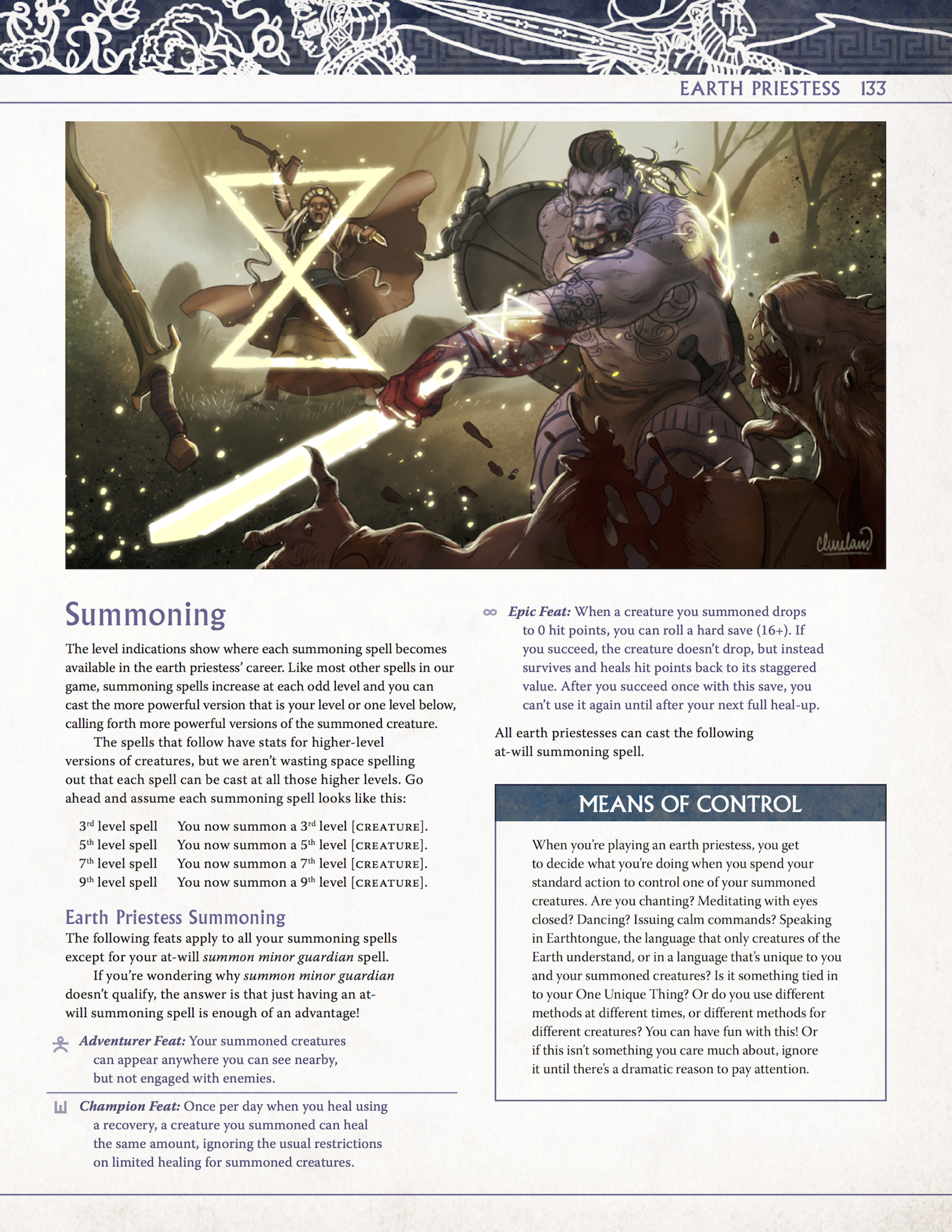 There's a 13G Quickstart coming, too. What's below is an abridged version of a longer overview you'll find in the Quickstart.

13thAge Glorantha(13G) is a 400+ page love letter to Greg Stafford’s World of Glorantha, one of the most extensively developed and renowned fantasy settings of all time. Creators of this love letter are Rob Heinsoo and Jonathan Tweet, the lead designers of the 3rd and 4th editions of D&D! This blend of familiar d20-rolling mechanics and indie-style storytelling tricks, tied to Glorantha’s runes, has created a fast-playing and emotionally satisfying game.

13G skips some of the everyday details familiar from other RPGs and focuses on the Hero Wars as a crucible, a clash of epic heroes battling to gain runic power to save the world from Chaos. The system emphasizes character-oriented storytelling and story-oriented action, encouraging newcomers to Glorantha to add their own stories to the world.

Players: Player characters start off as heroic figures. Like the greatest Heroes of the Gloranthan Hero Wars, each 13G PC has a unique special trait, feature, identity, or destiny that makes them different than any other person in the world and helps shape the campaign. Instead of merely swinging a sword as they charge into the mouth of a krarshtkid, characters are armed with sword forms and berserker abilities, blessed by the earth priestesses, and warded by Darknessspirits. Rob and Jonathan crafted each class’ abilities to be not only thematic (Storm Bull berserker), but also true to Gloranthan myths (earth priestess), and entertaining to play (trickster).

Gamemasters: The system combines action-packed combat with flexible storytelling aids. Encounters are quick and easy to plan; there is no in-depth math necessary to create an epic battle scene. Themonsters are thematic, simple to keep track of, and enjoyable to run—see the dragon snail below for an example of how monsters are designed to make every battle interesting and different. Since 13G is unapologetically about fightingmonsters, especially Chaos, it’s worth noting that the 90-page Enemies chapter includes an 8-page table for converting monsters published in other 13thAge bestiaries into Gloranthan equivalents.

New ideas: Rune narrations in the hands of the players to add indie-rpg style storytelling based on the fundamental powers of the Gloranthan cosmos. Broken and lost myths that demand unpredictable heroquesting. A Humakt heroquest involving little-seen figures like Shargash the Destroyer and Ikadz the Torturer. A trickster class demonstrating the value of a cosmic scapegoat! An earth priestess class that gives Ernalda a place among the heroes. Black Horse Troop and Puppeteer Troupe ‘monster stats’ which have ongoing story implications. A battle against Bat-priests and giant lice on the back of the Crimson Bat!

Thing I love: I love how the heroquestingrules exemplify the game’s focus on the Hero Wars. With the myths themselves breaking down, the world needs heroes to face down Chaos and protect what’s left of the innocent. The PCs heroquest to repair the world, gain the boons their communities need to survive, kill Chaos (and other enemies), and to gain heroquest gifts tied to the runes. These gifts take the place of what other RPGs portray as ‘magical items.’ The motivation for the PCs isn’t exactly treasure; it’s cosmic power tied to the runes that shape Glorantha!

Other thing: The book is beautiful, with inspirational new art and a gorgeous layout.
Where the rules live: 13th Age Glorantha is currently available in PDF from Chaosium and DriveThruRPG. If you purchase the PDF from Chaosium, you'll get a coupon for the full price of the PDF back when the hardback book is released later this year(mid-2018).The 13th Age core rules are published by Pelgrane Press. You need that book or the Archmage Engine System Reference Document version of the rules. 13G’s appendix includes notes on adding the classes in the core book and other 13th Ages upplements to the classes covered in detail by 13G. 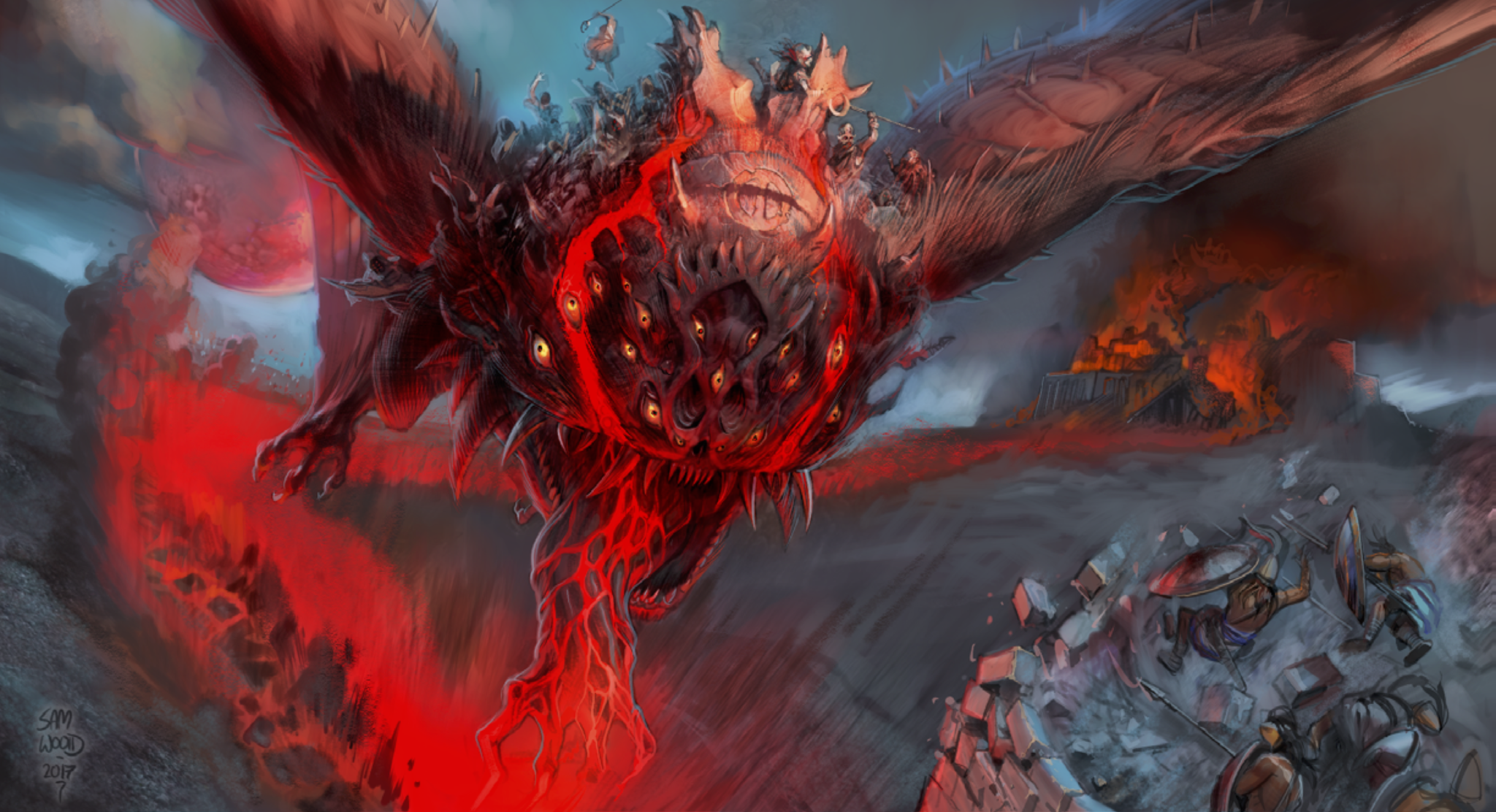 The Crimson Bat (artist –Sam Wood)
This is the chaos horror known as the Crimson Bat, one of the epic foes described in 13th Age Glorantha. Even 13th Age player characters at the Epic Tier will find the Bat an incredibly formidableopponent. Meanwhile, there's taking onthe evil Lunar cultists which ride on the Bat's back, not to mention the vicious Chaos Louses that infest it.
[FONT=&quot]Save[/FONT][FONT=&quot]Save[/FONT]​
Click to expand...

That is a pretty cool bat!

Nice. This is an interesting combination of setting and system.