D&D 5E Professional Spectator D&D: 3.5 Minutes per PC, per Round

Champions of the Realm:

D&D takes a stab at being a (virtual) spectator sport. I trimmed off the intro time (17 minutes) and judges-decision time (at 52 minutes) from the video to find that combat with two PCs (and no NPCs) averaged 3.5 minutes per turn, or 7 minutes per round.

So if you're in a 4-player combat, and your party-mates are all pros, you can expect your next turn to begin 10.5 minutes after yours ends (3 players times 3.5 minutes), plus time for NPC actions

To Deborah and Alicia's credit, they make this combat interesting for each other by remaining interactive during the other player's turn (and not, let's say, checking their social media). I was surprised to see that the DM didn't have a cheat-sheet for every ability of the PCs... that would have smoothed things over quite a bit. I'm still rating Harnquest higher than this one, but I was glad I found this on the interwebs.

How does your D&D group stack up to the Champions, in time-per-round? Are you ready to buy a foam hand and sit in bleachers for a D&D combat?

Yea, 3+ minutes per character turn? Not going to be something I'm going to watch. Nor would I tolerate it at my table. Sounds as exciting as watching golf!

LordEntrails said:
Yea, 3+ minutes per character turn? Not going to be something I'm going to watch. Nor would I tolerate it at my table. Sounds as exciting as watching golf!
Click to expand...

But anyway, that is way too long per round. Most players should take maybe 1-2 minutes (absolute tops!) for their character's turn. If most tables are taking that long per round, no wonder they get bored...

I keep thinking, as the turn drags on, and as I hope character advancement is not based off solely combat encounters for their sakes... 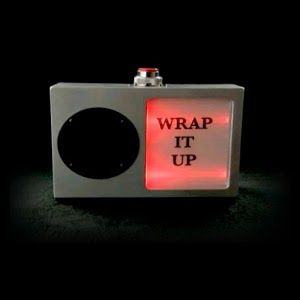 I have a hard time seeing D&D as a spectator event (I've never made it through more than ~20 mins of any video), and I have a really hard time seeing it as a competitive event (since that's directly opposed to one of the things that attracted me to the game).

That said, I do quite like the idea of putting the equivalent of a chess clock in front of each player - you get 15 mins per hour in the session for all of your actions, and once it's run out you're stuck. Though I doubt I'd ever actually be so cruel...

LordEntrails said:
Yea, 3+ minutes per character turn? Not going to be something I'm going to watch. Nor would I tolerate it at my table. Sounds as exciting as watching golf!
Click to expand...

It was significantly more fun than watching golf. The pace of the action, however, was comparable.

I should add: the pace of the Champions of the Realm is significantly faster than most of the live-plays I've seen, which includes my attempts at watching Critical Role and possibly company-sponsored Pathfinder demos.

More than once I have tried to properly time combats in my game to get a sense of average time per round and per turn - but every single time without fail, we get so wrapped up in what's going on we forget to start or stop the timer!

I've decided to take that as a sign that it doesn't matter since we are obviously having too much fun to pay attention to time.

Turns really depend on the player and the character. Someone casting a non-cantrip spell is generally going to take a touch longer than a martial or cantrip attacker, since they can affect multiple targets or have multiple effects (or both). A good player is paying attention and has their overall plan figured out before their turn. Such a player should taken no more than a minute or two to take their turn, and probably averages less than half that. Players that don't pay attention, don't plan out their turn, or don't know their own character's mechanics (biggest offenders IMO) all take 5-10 minutes per turn. Oh, and the more descriptive the DM, the longer each turn will take as they narrate (this is not necessarily a bad thing, but style dependent).

Shiroiken said:
. . . Someone casting a non-cantrip spell is generally going to take a touch longer than a martial or cantrip attacker, since they can affect multiple targets or have multiple effects (or both). A good player is paying attention and has their overall plan figured out before their turn. . .
Click to expand...

Yeah... Matthew Lillard might not fall into that category. His first turn ends at the 20-minute mark of a 60-minute video.

Which is fine, because his turn didn't start at 0:00, and it's pretty hilarious watching him shoot his character in the foot right out of the gate. I can't wait to watch the rest of the match, but I also have to wonder: are there live-play videos of an RPG in which the role-playing moves as quickly as, and concurrently with, the roll-playing?

D&D 5E MotM: thoughts on races in Monsters of the Multiverse
2