On September 14th, three different superhero RPGs launched on Kickstarter. Among them, the QUEERZ! RPG stood out with its world taken from ISA’s manga. This game features superheroics, super sentai, and super LGBTQ themes using an award-winning system. All of that was enough for me to reach out to publisher/designer, Amít Moshe, to learn more and he was kind enough to answer my questions. 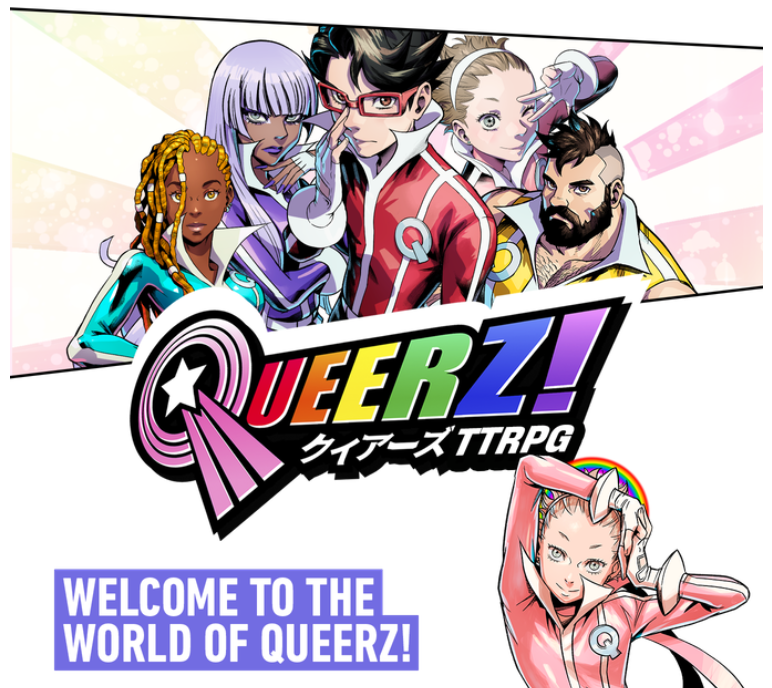 EGG EMBRY (EGG): Thank you for talking with me about your latest Kickstarter. What’s can you share about the QUEERZ! RPG?
AMÍT MOSHE (AMÍT): It’s a beautiful combo of action and heartfelt emotional drama. The Queerz are super sentai (Power Ranger) heroes that fight a glass-like substance called Ignorance. When this stuff takes root in the hearts of people, their worldview becomes constricted and they begin trying to force the world into it. They have a variety of attacks to propagate their brand of intolerance, and the Queerz must fight against them to stop that from happening. However, when the Queerz win they enter the Inner Space and hash out what made their enemies turn into villains, and eventually they become their allies.

EGG: This project is based on a manga by ISA?
AMÍT: All of the ideas of radical self-acceptance in the game came from the manga that ISA created. It’s just super fun and dynamic action, with all the trappings of anime we all love, like oversized weapons and Constructs and all kinds of mega rainbow blasts. On the other hand, I literally shed some tears when I read it the first time because it was so wholesome and reaffirming, it was just touching. So then I said - this needs to be a game.

EGG: It uses your City of Mist system, correct?
AMÍT: Yup! City of Mist marries the cinematic, story-propelling moves of Powered by the Apocalypse (PbtA) games with an open tag system. Instead of stats, skills, powers, etc. you only have a list of twelve tags divided into four themes. They define every aspect of you. When you take action, you roll 2d6 and add 1 for every relevant tag you have. Conditions and environmental tags further change that modifier. Because it’s so open, you can create any imaginable character with this system, but it’s still gamey and light-weight at the same time.

EGG: You have an amazing crew working on this project. Since there are way too many creators to cover, let me pick out a few and ask what they’re contributing. Jabari Weathers is known for their art, but this project taps the other side of their skills, correct?
AMÍT: Yes, Jabari is contributing an awesome character called Limina. They have what I could only define as mirroring powers - they can reflect someone's true self and empower them, or reflect the harm a villain wants to cause back onto them. Honestly, though, there are so many talented creators on board and they pitched some out of this world villains, pregens, and adventures to us. I hope we can hit all the stretch goals and get them all to realize their ideas. The villains are never just banal bigots, they’re always redeemable and relatable, and many of them are queer characters themselves who have gone off the deep end, so to speak.

EGG: That’s a good call out about the villains. What will Kira Magrann contribute?
AMÍT: Actually, Kira was one of those brave creators that tapped into this notion of Queerz heroes being turned to the path of evil. Kira’s adventure is about friends turning against each other and at the same time explores forgiveness and the fact everyone is dealing with something secret you may not know about. We’re really eager to start developing that with Kir, this adventure brings that kind of depth we always want in our products.

EGG: Mitchell Wallace, who I’m doing an interview with about the CHEW RPG, what’s he bringing to the QUEERZ! RPG?
AMÍT: Oh Mitchell is awesome. He is like an RPG machine! Mitchell pitched a few ideas to us. One character we really liked is that firebrand Power Ranger that is full of rage and is kind of a loose cannon. He is a hothead that’s been to jail more than once, a quality not very common among clean-cut super sentai heroes, but it’s all coming from his deep convictions.

EGG: There are so many great creators, but, again, there’s only so much space so let’s do one last one, Sen-Foong Lim.
AMÍT: I know, right? I feel like I want to talk about each and every one of them. He is giving us a mystery character, a genderfluid DJ that disappeared out of the scene for many years. Now they are showing up again and they have a pop-up club that can mysteriously vanish and show up elsewhere. Their abilities revolve around music whether it’s movement manipulation or emotional manipulation.

EGG: Those all sound interesting. The free demo game you have linked on the campaign page and DriveThruRPG is a treasure chest of material. You did not skimp on it. What comes with the demo?
AMÍT: Glad you liked it! We usually like to put a playable game out there to get people on board and we felt like this universe needed a proper introduction. With the demo game you get 5 pregens (Teddy, Twinkie, Willi, Absolutely Fabulous, and Harvey M), a chapter about the setting, a chapter about player rules, and a chapter about the MC rules with a demo adventure. You also get the first issue of the manga.

EGG: There are four boxed sets for this. What is in each?
AMÍT: The boxes have increasing levels of playability:
EGG: Do players need all four boxed sets?
AMÍT: Nope! Each box contains everything in the boxes of lower tiers.

EGG: You’re offering charity copies? How will they be distributed?
AMÍT: Yeah, it was really important for us that some of the love this game engenders will go to the people who need it. So we’re giving a portion of the copies we’re making as charity copies and will sell them after the Kickstarter. Backers vote for their preferred charity and the funds raised will be distributed among the charities based on backers’ votes. You can also suggest your own charity.

EGG: September 14th saw the launch of three superhero RPGs on Kickstarter: QUEERZ! RPG with a manga from ISA, Legends of the MetaVerse with artwork from Jae Lee and Mike Allred and more, and 5th Evolution: Carbide City #2 - 5e Super Heroes with a comic by Ian Fell. While all three crowdfunding campaigns plan to create superhero RPGs using professional comic book art, each game is unique in its own way. Without trying to lump each project under a single label of “just” superhero RPGs, I want to get your take on the popularity of those types of games. As the creator behind City of Mists, why do you think superheroes speak to game fans?
AMÍT: I mean - Marvel movies, right? There’s no question that people want more superhero content and games are very much a part of that. I do think that the mainstream superhero genre is already served by so many different games. City of Mist, while superpowered, addresses the more gritty and mystical side of things, and between its urban fantasy and noir elements, it’s kind of it’s own genre. QUEERZ! is the same, because it’s an intersection of a very specific type of superheroes - super sentai / Power Rangers / Sailor Moon kind of heroes - and the topic of intolerance to those different from you. Kind of like X-Men but much more on-the-nose and in-your-face, like only anime can be.

EGG: I agree with those thoughts. Beyond this project, what else are you working on?
AMÍT: I’m working on a universal system that is the evolution of the City of Mist system. It departs completely from PbtA and becomes its own thing. I’ve been playtesting it for a couple of years now and very excited about where it’s going. We’re also getting ready to launch the next City of Mist Kickstarter soon, which I believe will be a deep dive into the mythology of a specific culture, possibly even in a sister-universe of the canonical City of Mist, but which still follows the same cosmology and rules.

EGG: Those sound like winners! Thanks for talking with me. Where can fans find out more about this project?
AMÍT: Take a look at QUEERZ! here.
QUEERZ! RPG from Son of Oak Game Studio
Egg Embry participates in the OneBookShelf Affiliate Program and is an Amazon Associate. These programs provide advertising fees by linking to DriveThruRPG and Amazon.
Click to expand...

I'm getting strong Persona 5 vibes from the art and visual design.

TheAlkaizer said:
I'm getting strong Persona 5 vibes from the art and visual design.
Click to expand...

If only they skipped on Power Rangers and tangible ignorance thingy. I have been traumatized by Ridiculous Rita, Baldon, fetish costumed extras and oh-so-many tropes of this genre.

Anyway, the two other projects mentioned sound incredibly promising, so let's hope the QUEERZ does not tank.

I recently watched the original Power Rangers movie with my kid recently and it held up surprisingly well. Ivan Ooze chews the scenery with the best of them

Gradine said:
I recently watched the original Power Rangers movie with my kid recently and it held up surprisingly well. Ivan Ooze chews the scenery with the best of them
Click to expand...

Which one was that? Maybe I could use it for a detox movie session

ruemere said:
Which one was that? Maybe I could use it for a detox movie session
Click to expand...

It's on HBO Max; we found it by happenstance and told our daughter what it was about and she was like "yes I want to watch it!" She loved it.