Resist & Remember: Weimar -- Punch Nazis in the face, for charity! 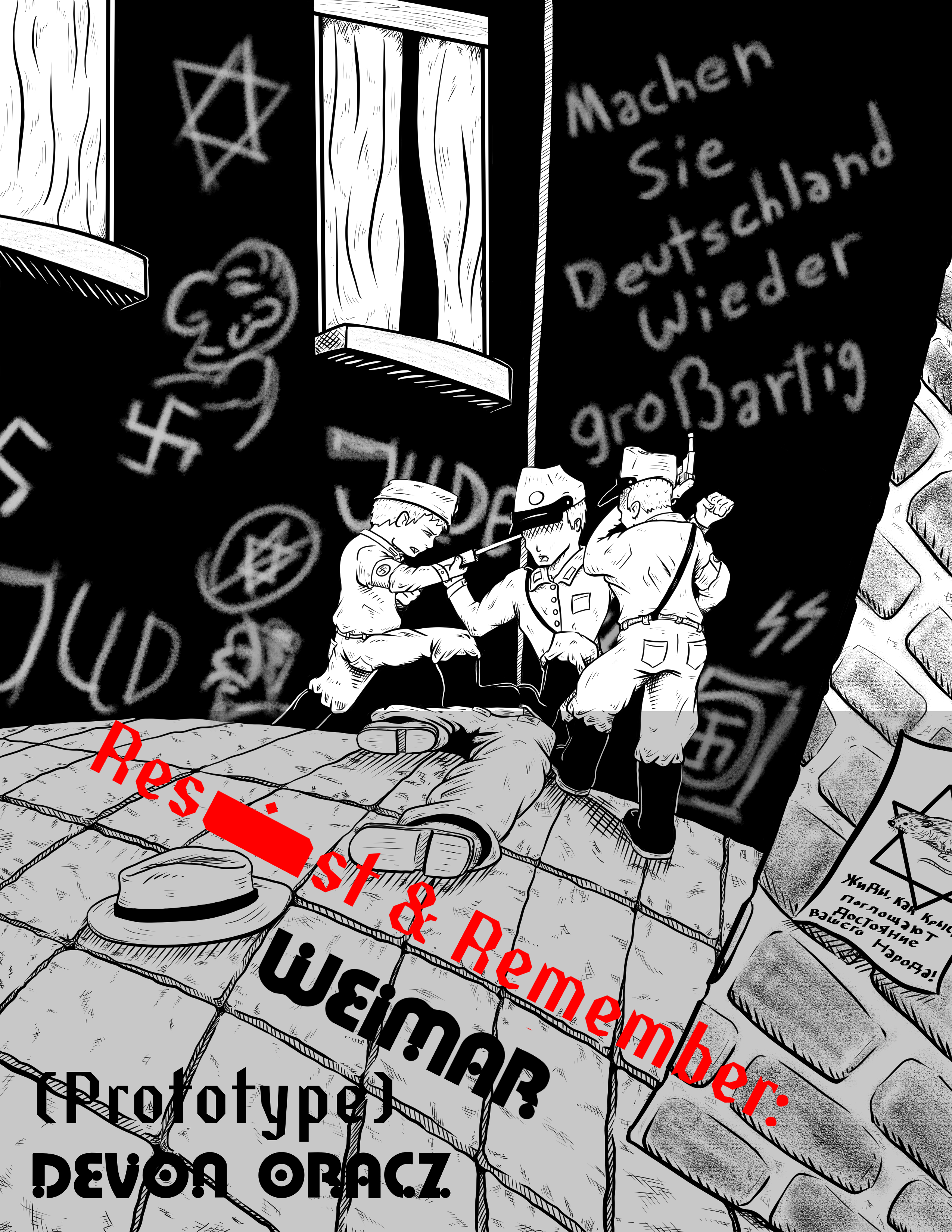 that I've been horribly remiss in not advertising here sooner. I've been crazy busy with real life crap including some nasty periods of incapacitation due to illness, so I am sorry you're only hearing about this as the KS approaches its final week. Thus far the Kickstarter has been funding slowly but steadily, which is not ordinarily how Kickstarters are: as a rule, their curves usually look like a peak at each end with a great big valley in the middle.

R&R could be said to be using a greatly simplified, heavily modified version of the 5E SRD. As it doesn't have races, classes, spells, or the concept of proficiency, the argument that it is not 5E anymore at all because the only thing it REALLY has in common with D&D 5E is a core mechanic of rolling a d20, adding a modifier, and comparing it with a target number (shrug).

The game comes with a baked-in campaign (that's how I'd explain to most gamers), whereas to anyone more into the storygame scene, I would say that it's a structured game carefully centered on specific place(s) at specific time(s). The game has a five act structure, and is designed for each player to GM one of the five acts. (If there are less than 5 players in the group, one will wind up GMing multiple acts; if there are more, players beyond the fifth will get out of GMing duties.)
When I say the game, I actually mean "the Uprising". Resist & Remember is a game engine for memorializing, celebrating, and educating about many oppressed groups throughout history who

R&R characters are actors, writers, artists, cabaret performers, musicians, expats, WWI vets, Communists, Anarchists, criminals and other assorted artsy types and/or ne'er -do-wells in 1930 Berlin, Germany, during the closing years of the Weimar Republic. They are also likely to be Jews, Romani ("Gypsies"), homosexuals, and other targets of the Nazis who have been marked for genocide because they were "born wrong". They are not wizards or warriors, they are not druids or paladins, they are not special ops BAMFs or shadowy spies. They're just people like you and me. But they will go down fighting.

The Weimar Republic was a truly incredible time and place to be alive. Berlin was an entertainment mecca and huge strides were being made to advance nearly every field of the arts. In film, in particular, if not for the tragedy of the Nazis' rise to power, it is very likely that Berlin would have become the cinematic capital of the world that Hollywood is today. Cabaret performances were risque, provocative, and often highly political. Bertolt Brecht was in the process of inventing and revolutionizing agitprop theater and the art of satire. Gay men and lesbians were able to live openly to a certain extent, and there were bars, dance halls, and cabarets that catered specifically to them. The "new woman" was emerging, financially, socially, and sexually independent, provocative, flirtatious, and opinionated. African-American Jazz musicians appearing in Berlin by special request were worshiped like young gods. Jazz itself shook the cultural foundation and scared the establishment just like rock and roll did in the United States in the 1950s.

The reactionary backlash response to all of this progress that Berlin made ahead of its time was National Socialism, and all of its nightmarish "achievements" in reaching the pinnacle of human evil.

Resist & Remember's one unique mechanic is the Hate Die, representing the rising tide of bigotry and tyranny as the Weimar Republic gave way to Nazi Germany. Think of the Hate Die like bardic inspiration in reverse. As the Acts progress, the larger the hate die gets (from a d4 to a d12) and the more often it is rolled by the GM and subtracted from the PCs' rolls.

The game is already written so if you want more in depth information on the setting and mechanics and so forth, an early alpha PDF draft of the game is available here on my Patreon to all Patrons of Adult Silver Dragon tier or higher. I also did a Q&A with Dan Davenport, the log of which can be found here.

Thank you all for your time and interest. Your support would mean the world to me and no doubt piss off neo-Nazis, White Nationalists, and other "very fine people" that talk about anti-fascist action as if it could ever somehow be a bad thing, and if you're pissing them off, you know you're doing something right. In case any ENworlders have already backed this project, which isn't outside the realm of responsibility considering how long the KS has been running, thank you very much for that, as well.

* Just the other day, my Uber driver, an intelligent seeming grown man, did not know what Kristallnacht was. To me, this made it all the more evident that the job of ensuring the Holocaust is never forgotten--and that nothing like it ever happens again--is still actively in need of doing, by all of us.

The following is for conservatives and Republicans only to highlight and read. Please do not read if you don't identify as a conservative or a Republican. If you want the gist, it's not a hateful screed of any sort, it's just me explaining in a roundabout way that I don't hate all of them or think everyone I disagree with is a Nazi, and that I'm actually kind of a moderate/centrist who sees good and bad actors on both sides in the culture war. I just use some language and terminology that I imagine is much more palatable to conservatives than progressives.

Maybe you translated the German graffiti in my promo image, or took offense at the "very fine people" crack. Maybe you've already seen Resist & Remember elsewhere on the web and taken offense at it. First and foremost, I want you to know that I don't hate you, and I don't think you're a Nazi. I mean, if you are like literally an avowed card-carrying self-identified neo-Nazi that thinks the Holocaust never happened or was a good thing then that's a different story, screw you, please go die in a fire, but I doubt you are. In any case, the point I'm trying to make is that I don't think everyone who disagrees with me is a Nazi.

If you see the election of Donald Trump to the office of President as anything but an unmitigated and terrible catastrophe for this country, you and I are never going to see eye to eye on that. Also, I'm a liberal democrat, and a socialist, and an anarchist, and these are all things you hate. But in spite of that, I agree with you on many issues that might surprise you.

I believe that political correctness has absolutely reached an insane level and is running amok in the US. Both the power of the PC police and the number of things they find a way to take offense at are completely out of control. The amount of speech policing and dogpiling that happens on certain platforms that should be politically neutral is disgusting. The far left, the radical left, the "alt-left" or the "regressive left", whatever you want to call them, wield a great deal of societal power. SJWs, a term I am using here unironically if not unselfconsciously, are a plague. They aren't just extremely obnoxious, although they usually are that too, but they pose an active danger to the classical liberal values American was founded on, values like freedom of speech. So called "safe spaces" where no whites or no men are allowed are just as racist as "Whites Only" bathrooms in the Jim Crow South, no matter how many times they move the goal posts on their definition of what racism is. "Safe spaces" particularly in colleges are in general a deeply flawed concept when half of the point of higher education is learning how to deal with being exposed to ideas you strongly disagree with.

Uninterested in equality, they simply want to redistribute racism and sexism, building a system where white men are fourth class citizens compared to black women. They are uninterested in combating any of the MAJOR social injustices in the world, like the millions of women living in Muslim countries that have virtually no rights and are treated essentially as chattel. As a matter of fact, many of them are quick to call you "gross and racist" (not that Islam is a race) if you criticize the religion of Islam at all. Instead of taking on real issues, they keep making up trivial things to be excessively pissed off about like "microagressions", "mansplaining", "manspreading", etcetera. That, and a whole lot of time wasted on a whole lot of virtue signalling.

To be clear, I absolutely consider myself an advocate for social justice, but to actually embrace the pejorative "social justice warrior"... well, to me indicates a degree of self-importance and self-righteousness that is unbearably smug. While my leanings are strongly anti-authoritarian, and fairly strongly socialistic, I think overall I would evaluate myself as a centrist or a moderate. I do genuinely believe that there are bad actors on both sides in the culture war we find ourselves in, which I pray will not escalate to a shooting war (I mean, more than it already has).

In a move I hope will prove everything I've said here I've made no effort of advertising this project to The Big Purple (arr pee gee dot net) even though I think the user base there would eat it up. And not just because, like around 50% of gamers, I'm permanently banned from there. No, the more important reason is that the people that run that site have demonstrated repeatedly that they are themselves fascists and anyone who remains complacent in that fascist regime is no anti-fascist either. I do not want their dirty fascist money sullying my anti-fascist RPG.

You are still welcome to hate me or hate my game if you want to. I just wanted to clarify that even though I do hate Trump, I don't hate you, I don't think that you're all Nazis, and to one degree or another I agree with you at least partially on many social issues.