Return to Oz: Defining the Universe

I've written before about the world of Oz as created by Lyman Frank Baum. The setting has several appealing aspects for campaign building, including the fact that it's a well-known universe, much of it is public domain, and it ties together a bunch of different genres. In short, if you're looking for a non-traditional replacement for the Feywild, Oz is a great place to start. Also, Santa Claus lives there. More on him later. 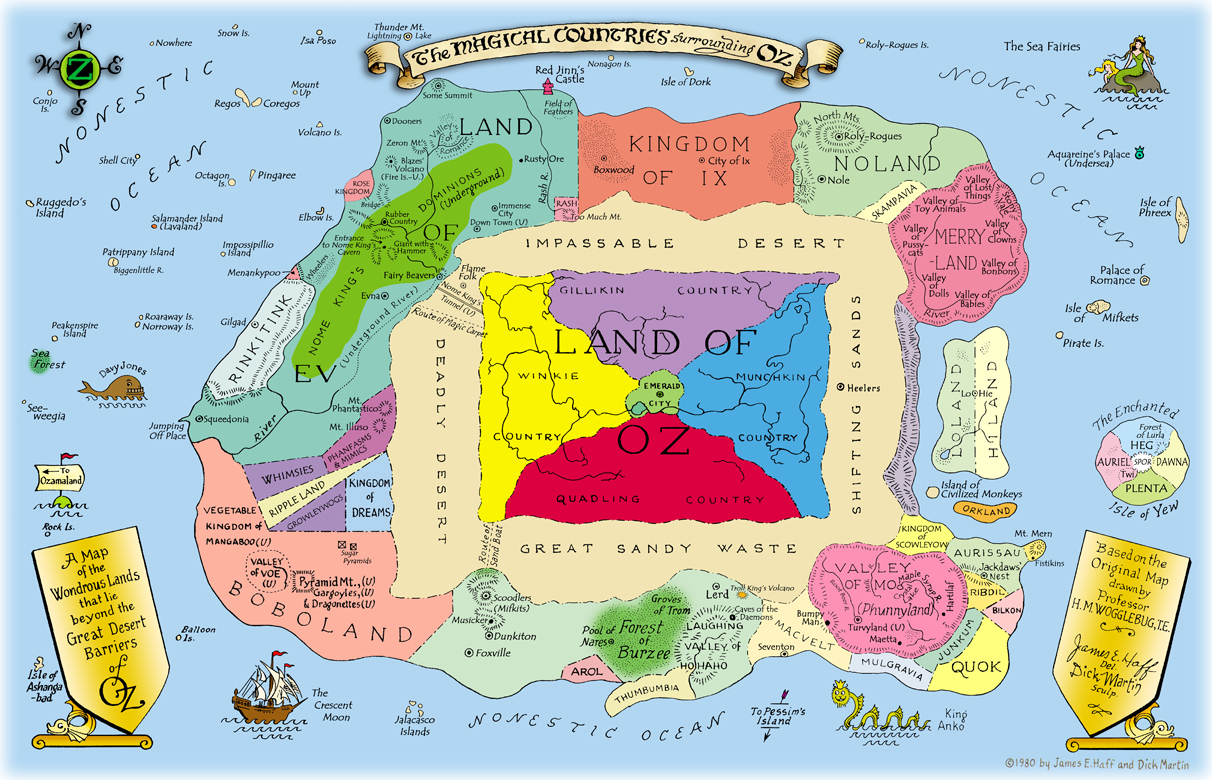 The Wonderful World of Baum​

If your only knowledge of Oz is the Wizard of Oz movie, you're in good company. And by all accounts, multimedia was always Baum's plan.

Baum started out as a theater producer and playwright, but found success in publishing children's literature. All the while, he kept working on producing films and plays. He wrote 14 novels in the Oz series, plus over 40 other novels, over 80 short stories, and more than 40 scripts. For Baum, Oz was the beginning but never the end of his vision. Baum regularly turned theatrical and movie scripts into books when they didn't gain traction on screen or in the theater, like The Marvelous Land of Oz and Tik-Tok of Oz.

But Baum always had bigger plans. He wrote about the absurd land of The Magical Monarch of Mo, of two children visiting a fairyland in Dot and Tot of Merryland, gave Santa a backstory in The Life and Adventures of Santa Claus, followed the adventures of a gingerbread man come to life in John Dough and the Cherub, and warned about what happens when you get your wish in Queen Zixi of Ix. When those books didn't perform well, he placed all three worlds back into the same universe as Oz with his book, The Road to Oz, in which Santa Claus, King Bud and Princess Fluff (from Queen Zixi of Ix), and John Dough show up for the festivities. Later, Baum would try to escape Oz again with the adventures of Trot and Cap'n Bill in The Sea Fairies and Sky Island, but when those books underperformed, the two main characters landed in Oz in The Scarecrow of Oz. All together, these realms created the foundation for Nonestica, a made-up term drawn from the surrounding Nonestic Ocean mentioned in the Oz books.

Baum's fans took things further, adding kingdoms from his other fairy tales, specifically American Fairy Tales, which featured the story "The Queen of Quok." That story adds more kingdoms (Bilkon, Junkum, Mulgravia, and Macvelt), and with a few other short stories from Baum, rounds out the other lands on the fan-made map of Nonestica. Adding to this diverse landscape are the 26 books set in Oz that are currently in the public domain, which flesh out the four corners of that Empire.

Despite the fact that Oz books were very popular in their day, little after The Wizard of Oz is familiar to modern audiences. There's an entire shared realm outside of Oz that's just waiting to be fleshed out by enterprising Game Masters.


Putting it All Together​

I recently published my own Oz campaign supplement for Fifth Edition and there's an even bigger book funded by Kickstarter on its way from Double Critical. It's a lot of work to tie it all together, and not all of Oz hangs together naturally without some effort.

Nonestica is a hodgepodge of ideas and it shows on the map. The borders within and outside of Oz aren't particularly logical (they don't follow geographic contours), because they were made up and added as Baum (and later his successor, Ruth Plumly Thompson) wrote more books. It was not uncommon for a new species or kingdom to be introduced and never be mentioned again.

This dreamlike quality makes Nonestica a fluid place that lends itself to the concept of domains. We've seen domains used to good effect in Van Richten's Guide to Ravenloft, but there are hints that the same premise will be applied to the Feywild with the upcoming book. The Wild Beyond the Witchlight mentions "Domains of Delight," a similar concept with lands that can open and close their borders and even move around as the game master sees fit.

Nonestica also encompasses a variety of genres. There are steampunk-style giants invented by the King of Scowleyow (from Mo), an island populated by failed inventions (the Isle of Phreex from John Dough), sea fairies battling fiendish monsters in the Nonestic Ocean (from The Sea Fairies), an academy of witches in Ribdil, Santa Claus' workshop in Hohaho Valley, and even a demon portal that spawns awgwas who bedevil the jolly old elf. There's just enough rough outlines to use Oz tropes in different lands.

That diversity goes beyond the surface and extends to the sky, where numerous "skylands" are detailed, from the pink-vs.-blue divided Sky Island to the militaristic Airlanders who possess blasting horns, gunpowder, and flying staves. There's much below ground too, including the Kingdom of the Nomes (a lot like D&D's dwarves), and a multitude of "hollow world" realms that exist in their own ecosystems, like that of the plant-like mangaboos, the silver people of the isles, and the burrowing flamefolk who live in lava.

Substituting Nonestica as a fairy land to replace the traditional Fey lands usually associated with Seelie and Unseelie has its own hazards. But with a few tweaks, you can add Nonestica to your game.
In the next article we'll discuss some how to deal with some of the baggage that Oz brings along with it when adapting it to a D&D campaign.

Your Turn: What books have you adapted to your campaign?

Mike "Talien" Tresca is a freelance game columnist, author, communicator, and a participant in the Amazon Services LLC Associates Program, an affiliate advertising program designed to provide a means for sites to earn advertising fees by advertising and linking to http://amazon.com. If you like what we do here at EN World (the Forums, Columns, News, etc.) and would like to help support us to bring you MORE please consider supporting our Patreon. Even a single dollar helps!
T

Eyes of Nine said:
Funny to be reading this today. I was reading through the War for the Crown Adventure Path for PF1, and in volume 1, there's a monster that looks suspiciously like the Wheelers from Oz. They are called the Onyvolans.


View attachment 143279Either way, running a game in Oz would be cool. I didn't back the Double Critical KS, but was sorely tempted...

Henry said:
I honestly never knew Baum had written a WHOLE FRICKIN’ UNIVERSE for Oz; I knew there was some stuff beyond just Wizard, but had no idea how extensive it was.
Click to expand...

Yep. He kept trying to leave OZ, but his fans loved it, so the new characters ended up moving to OZ after a couple of books. Thomsen was actually the better writer, but she couldn't have done it without Baum's world building. I only have one that was written by the illustrator, and none of the ones that were written by Baum Jr., so I can't really speak to those.