In the past, computer role-playing games (CRPGs) have largely sidelined the role of the game master in favorite of simple automation chiefly dedicated to managing non-player characters (NPCs). But that's beginning to change as artificial intelligence (AI) takes over the more complex role of managing the entirety of the game--a role human game masters have been handling for decades. 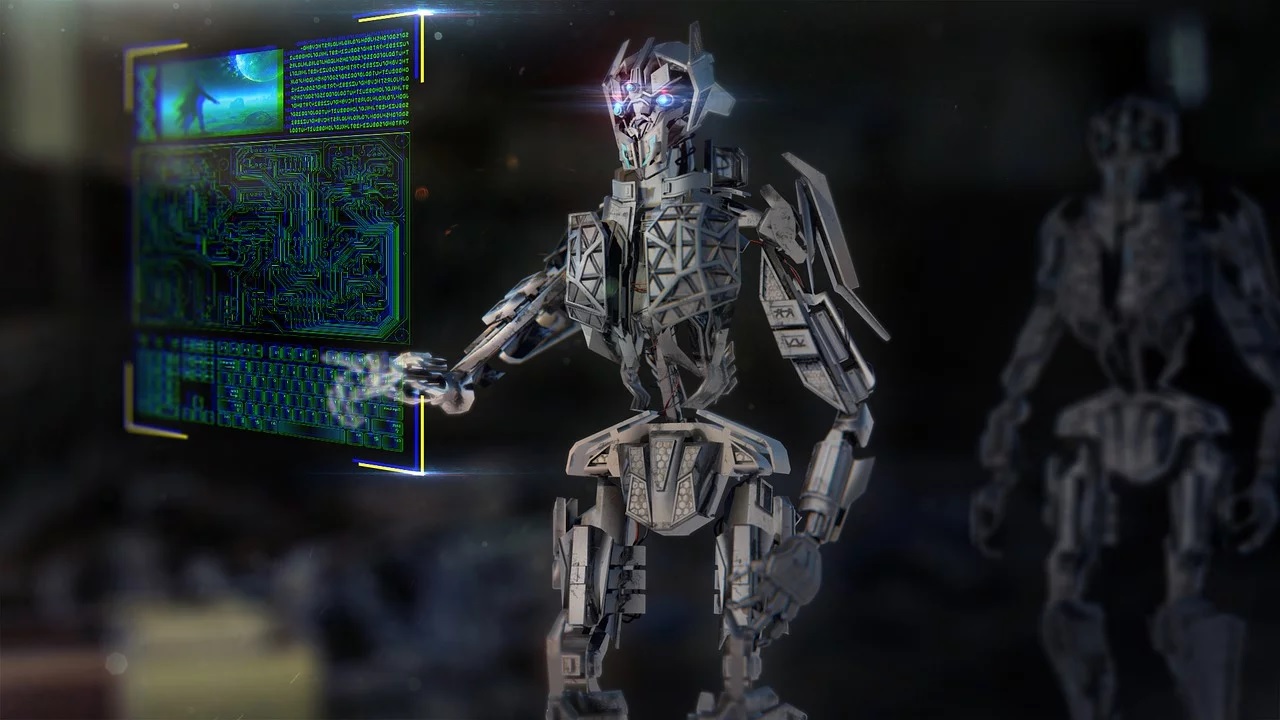 Picture courtesy of Pixabay.​
Meet the Game Master
In Master of the Game, co-creator of D&D Gary Gygax outlined seven primary and seven secondary functions of what constituted the role of a game master:

These functions are as Moving Force, Creator, Designer, Arbiter, Overseer, Director, and Umpire/Referee/Judge (a single function with various shades of meaning). The secondary functions of the Game Master are Narrator, Interpreter, Force of Nature, Personification of Non-Participant Characters, All Other Personifications, and Supernatural Power.
Click to expand...

Of these roles, game designers and marketers filled the primary roles of Moving Force, Creator, and Designer and the secondary roles of Narrator, Interpreter, Force of Nature, Personifiation of NPCs, All other Personifications, and Supernatural Power. NPC control has now become so advanced that it's possible for computers to pretend to be other players, as Fortnite has demonstrated.

With some exceptions, most games eliminated Arbiter, Overseer, Director, and Umpire/Referee/Judge--particularly problematic in massive multi-player online role-playing games (MMORPGs) where a human overseeing some situations could prevent ugly interpersonal conflicts. That's now beginning to change thanks to AI.

The Return of the Director
An AI Director restores the Director role to CRPGs in a way that is both subtle and far-reaching. AI Directors, like game masters, operate behind the scenes to keep the game balance and competitive, managing the NPC AI and reacting to player decisions. One of the first leaps forward in using AI was Left 4 Dead (L4D), a four-player zombie survival game. Mike Booth, architect L4D's Director, explained why they implemented it:

Before the 'director' part of the AI Director was added, the experience was really uneven. While many games would be great fun, some games would be really, really easy with lots of empty streets and few zombies. Other times, a playthrough on the same map would be a brutal meatgrinder with tons of zombies everywhere. We had layers of randomness going on, which kept things unpredictable, but that also meant sometimes you 'rolled' a bad game. Randomness is, well, random. We couldn’t ship a game that was often really fun, but sometimes really not.
Click to expand...

Alien: Isolation is a more recent example, and it shows how multiple AI can work together to create a compelling game experience:

The alien in Alien: Isolation has two driving A.I. forces controlling its movements and behavior: Director A.I. and Alien A.I. The Director A.I. is a passive controller that is in charge of creating an enjoyable player experience. In order to achieve this, the Director A.I. knows where both the player and alien are at all times. However, it does not share this knowledge with the alien. The Director A.I. keeps an eye on what is referred to as the Menace Gauge, which is essentially just a measure of expected player stress levels determined by a multitude of factors such as the alien’s proximity to the player, the amount of time the alien spends near the player, the amount of time spent in sight of the player, the amount of time spent visible on the motion tracker device, etc. This Menace Gauge informs the alien’s Job Systems, which is essentially just a task tracker for the alien. If the Menace Gauge reaches a certain level, the priority of the task “search new location zone” will grow until the alien moves away from the player into a separate area.
Click to expand...

This same methodology is now being used in the upcoming Magic: The Gathering video game, Magic: Legends:

Magic: Legends is about loot and epic battles. To ensure everyone is getting a challenge that excites them, Cryptic spent a great deal of time developing “The Director.” The Director A.I. measures the intensity of battles and adapts the situation to how you’re performing. This is separate from game difficulty, but in case you’re wondering, the game does have the standard modes. The Director is more about the moment-to-moment action and providing some variety and unpredictability. If you’re really mowing down the competition, it might spawn a miniboss you didn’t experience when you previously played the quest. Or if it ups the amount of enemies attacking you and you start to get overwhelmed, it will tone down the action so you can regroup. Taking on these tougher challenges rewards you with better loot drops.
Click to expand...

If this sounds familiar, it's because the AI-driven Director is handling the role human game masters have been handling for decades. It's ironic that Wizards of the Coast, through its partner Cryptic, has come to the conclusion that a CRPG needs a Director for D&D's sister franchise. We can only hope WOTC will apply these lessons to future D&D video games.
Click to expand...

Mike "Talien" Tresca is a freelance game columnist, author, communicator, and a participant in the Amazon Services LLC Associates Program, an affiliate advertising program designed to provide a means for sites to earn advertising fees by advertising and linking to http://amazon.com. If you like what we do here at EN World (the Forums, Columns, News, etc.) and would like to help support us to bring you MORE please consider supporting our Patreon. Even a single dollar helps!
C

Just check out "nethack", (the evolution of decades old Unix game "rogue") which is based on D&D. It has some aspects of A.I. (Although it is just a very good written long CASE n THEN x ELSE y etc. routine).

Check out all the possibilities this graphically primitive game has, e.g. naming items you find, wishing for named artifacts, polymorphing items and mobs etc. You can dig through walls, create pits, or holes which you can fall through and more. In the sense of how you can interact with items mobs dungeon environment etc. it surpasses many of the much more modern CRPGs.

I wait for the artificial D&D player. Someone who doesn't do powergaming, ruleslawyering, patronizing that he knows the fantasy setting better, crying each time he rolls below 10, whining because a rule is not simulationist, whining because another rule is too simulationist, arriving late to the game, spending ages browsing books, looking at the mobile phone all the time, sucking his fingers after diving into the chips bowl...

Yeah, won't it be great when we don't have to interact with real people any more?

Li Shenron said:
I wait for the artificial D&D player. Someone who doesn't do powergaming, ruleslawyering, patronizing that he knows the fantasy setting better, crying each time he rolls below 10, whining because a rule is not simulationist, whining because another rule is too simulationist, arriving late to the game, spending ages browsing books, looking at the mobile phone all the time, sucking his fingers after diving into the chips bowl...
Click to expand...

Wouldn't that be great! If you ain't running the game then you ain't playing it.

Supporter
But how will I argue with the GM that my knowledge geology skill should let me know the weakness of a rock elemental? But I did enjoy the GM narration from the early parts of DDO.

univoxs said:
But how will I argue with the GM that my knowledge geology skill should let me know the weakness of a rock elemental? But I did enjoy the GM narration from the early parts of DDO.
Click to expand...

It's also harder to convince the robo-GM to let you reroll your skill check if you make sure to grab it a new beer the next time you're up, or flatter the GM to secure better treatment.

On the other hand, it's probably never too early to start, just in case...

You know I've always thought that Artificial Intelligences are better suited to GMing, given their ability to multitask and their logical, rational decision-making. And is it just me, or has The Cloud really lost some weight recently?

Interestingly, is like some scripting to follow as a DM so I don't have to question if I'm playing things fair or if I'm picking on a certain character. Something like a soft agro system so I know who the enemies are most likely to attack. Having this kind of info would allow the players to make tactical decisions based on more info about what the enemy is likely to do, too.

Li Shenron said:
I wait for the artificial D&D player. Someone who doesn't do powergaming, ruleslawyering, patronizing that he knows the fantasy setting better, crying each time he rolls below 10, whining because a rule is not simulationist, whining because another rule is too simulationist, arriving late to the game, spending ages browsing books, looking at the mobile phone all the time, sucking his fingers after diving into the chips bowl...
Click to expand...


What about eating more of the pizza than anyone else without chipping in for it first?

Today software allows "roguelike" videogames, but an AI creating dungeons randomly isn't a true DM. A better option would be a quest/mission/adventure creator and the own fandom would publish and share their own stories.

Or they could create an app working like a gamebook but also controlling monsters and stats for a solo miniature game. My warlord and my squad would be exploring a dungeon but I don't know yet where the traps or secret doors are hidden. The app only would show the reaction of nPCs and enviroment but I would controll the stats of all the characters, allowing my own house rules.

slobster said:
It's also harder to convince the robo-GM to let you reroll your skill check if you make sure to grab it a new beer the next time you're up, or flatter the GM to secure better treatment.

On the other hand, it's probably never too early to start, just in case..

Other than all the non-game things that happen when with friends, I would like to play in a VR type of DnD. You put on your glasses and join a group and the computer can control how fast a first level you can swing vs. a 10th level you. Things like how powerful a spell is or damage would be fine. The default DM may end up being the programmer in this case.

I would still like to play old school with dice and such, but for other times. Is this similar to VTT in that it is mostly just play and not so much BS around the table.

Danger Will Robinson Danger Will Roberson. Roll a death save
Nat 1
Too bad. You are dead. And I get all the pizza.
Sound of Blaster fire.

AI are great at generating content when it follows clearly codified rules. Like spawning enemies, or putting together a random map. However, they are still terrible at generating stories which I think makes them still pretty terrible DMs for table top RPGs. Computer can generate sentences that make grammatical sense, but they have no sense of the content of those sentences so when they put them together they are often nonsense.

AI also has trouble adjudicating anything beyond delivering predefined responses. In video games you can only take actions that the game developers have put into the game. However, in TTRPGs the players are free to suggest any action to the DM which is part of what makes them feel so much more alive.

Where Are the Board Gamers?
2