RPG Crowdfunding News – Out of the Box, HYPERBOREA, Kisarta, and more

This list was written before I went to Gen Con (deadlines and all) so any quickstarters or the like that end between August 16th and the 22nd may be missed. Still, there’s a strong lineup between Out of the Box and HYPERBOREA and a number of quick hits looking at RPG-related Kickstarters for products like cards, dice, and more.

​
Out of the Box: Encounters for 5th Edition by Nerdarchy

“Awesome, unique, easy-to-use encounters for Fifth Edition (that are simple to adapt for any tabletop RPG). Out of the Box Encounters is designed for you, the Game Master, with your campaign, your players and their characters in mind. Every unique encounter provides insight into players and consideration for the out of the box ways characters approach challenges. Player ingenuity and engagement leads adventures in unexpected directions often as a matter of course, and we wanted to create a veritable box of encounters loaded with everything you need to run memorable, exciting stories no matter what twists and turns your group takes. Out of the Box: Encounters for Fifth Edition contains: 30 unique encounters — even more with stretch goals by RPG industry professionals and influencers, new monsters — including new legendary creatures, lairs and regional effects, new magic items adventurers will really have to earn — especially when the monsters are using them, map packs, and flat plastic miniatures for each encounter. Matt Mercer believes in our project so much that he wrote the forward for Out of the Box Encounters.” 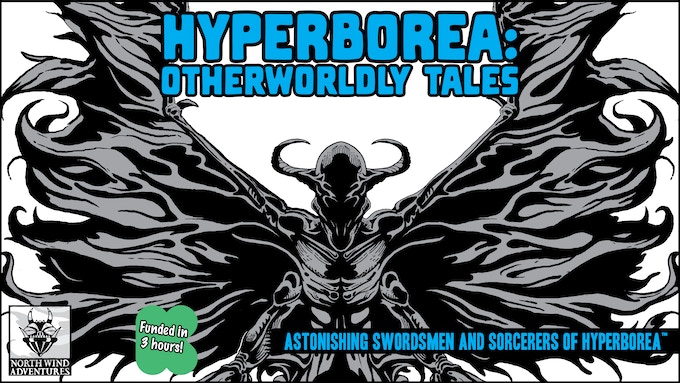 Forts & Frontiers: The Feast of the Dead Deluxe by Campaign Games

“A deluxe edition of The Feast of the Dead for Forts & Frontiers with rules for nationalities, classes, boons, travel, and more. Forts & Frontiers is a historical roleplaying game based on Dungeons & Dragons 5th Edition (5e). It allows GMs and players to experience 17th and 18th century North America from the diverse and often conflicting perspectives of the people of the time: British, French, and other European settlers; Wendat, Haudenosaunee, and other Nadouek nations; those striving to create new ways of life; and those striving to preserve the existing ways. The Feast of the Dead is an adventure module for Forts & Frontiers which was released on Free RPG Day 2019. It is set in 17th century Wendake (modern-day Ontario) and tells the story of a Wendat sachem, his trading party, and a Jesuit priest as they travel from Trois-Rivières to the remote Wendat village of Oenrio on the shores of Lake Karegnondi. Together they face the perils of Wendake—from wild rivers to hungry predators to a darkness nearly as old as Ataensic herself. The Free RPG Day edition of The Feast of the Dead was a quickstart introduction to the key concepts and new rules of Forts & Frontiers. The Feast of the Dead Deluxe will expand on the adventure as well as the concepts and rules found in the original edition. It will feature an expanded, multi-session adventure along with the full rules for all aspects of the adventure including French and Wendat nationalities, Warbearer, Priest, and Shaman classes, boons, prayers and rituals, travel, and bestiary including natural and mythical creatures.” 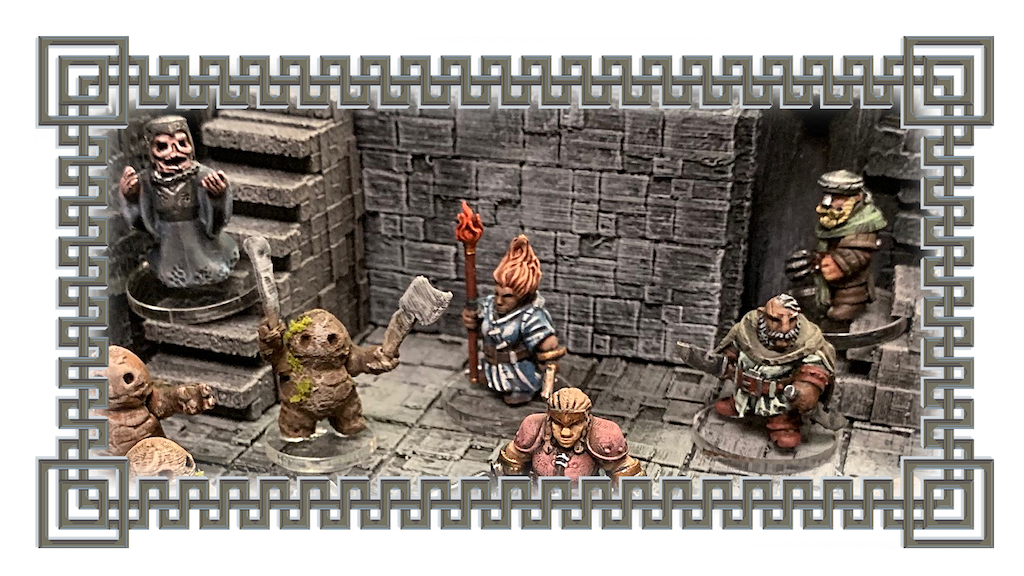 ​
Beyond the Copper Doors by Ill Gotten Games

“An RPG adventure module compatible with 5E, OSR, and PolyModular with 3d printable miniature files for every person, place, and thing. BEYOND THE COPPER DOORS is a complete 3d-print-and-play adventure module. In addition to the adventure PDF which will support rules compatible with 5E Dungeons & Dragons, OSR gaming (AD&D, OSRIC, et cetera), and PolyModular (our in-house system), this set will include 3d printable files for every location, object, NPC, and monster you need to run the game, plus a complete party of optional pre-made player character miniatures. In the adventure, players will take the role of young dwarves (or other characters hired by a dwarf clan) reclaiming an ancient hold from which they were exiled in the distant past. The module will be designed for starting adventurers (1st to 3rd level in 5E/OSR terms), and will feature a system for randomly generating dungeons within the abandoned depths of the Hold of the Downward Sky.”

“Face horrors from a netherworld as a Soul, dead and damned, in this dark fantasy setting for 5th Edition! Kisarta is a new setting rulebook for the 5th Edition (OGL) that will be published worldwide in English and Italian language. Welcome to Kisarta, a world of danger and horror, where you will face chaos, insanity and damnation as well as deadly enemies and frightening monsters. The netherworld realms of Kisarta are ruled by unholy and terrifying beings, and inhabited by the souls of the dead that awaken there. It is a place of struggle, and every adventurer must face constant danger and harsh challenges. Each player impersonates the Soul of a dead person awakening in a tomb near the mysterious City of Limbo. Souls must fight, plot, track down cults and conspiracies to uncover ancient secrets hidden among the forgotten ruins and in the minds of the beings that live there. Only then can they hope to carve out a place for themselves within the tangles of the Great Game, where true power lies. Kisarta setting rulebook hardcover: 220+ pages, full-colored, hardcover, letter format (21,6 x 27,9 cm / 8,5 x 11 inches).” 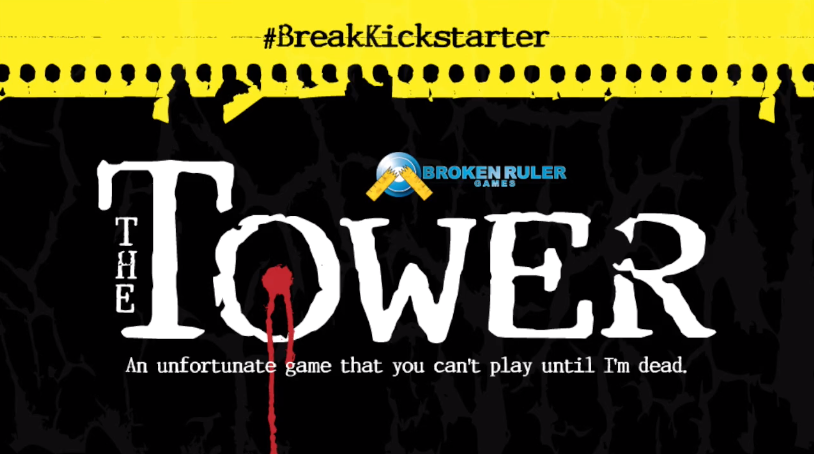 The Tower by Broken Ruler Games

“A tabletop roleplaying game for #BreakKickstarter where you don't get to play the game until the creator is dead. The Tower is a mature tabletop roleplaying game about a terrifying moment that changes the lives of the people involved. And you won't be able to play it until I'm dead. In the spirit of Break Kickstarter, this campaign will provide you with a password-protected PDF of the finished game by the promised delivery date. The password will only be provided by me in the event of my death by natural or accidental causes. It will be available exclusively in PDF and is expected to have a page count between 18-24 pages in an 8.5”x11” format for home printing. The Tower is a story game featuring a single Facilitator/Gamemaster and a group of 2-5 players taking on the role of fictional characters in a historical event. After an introductory scene presenting a day in the life of these characters, a life-threatening event begins and the game will end after exactly 96 minutes of play.”

CARDS The Moebius Deck of Wonders - Usable in any TTRPG System by Mystic Dragon Games, LLC

MULTIMEDIA Into the Mad Lands: Season 1 by Mad Jay

“Enhance your game play with BIO-Dice, powerful energy in a tube.”

If you like what we do here at EN World (the Forums, Columns, News, etc) and would like to help support us to bring you MORE please consider supporting our Patreon. Even a single dollar helps! This article was contributed by Egg Embry as part of EN World's Columnist (ENWC) program. Please note that Egg is a participant in the OneBookShelf Affiliate Program, an affiliate advertising program designed to provide a means for sites to earn advertising fees by advertising and linking to DriveThruRPG.
Last edited by a moderator: Aug 12, 2019