I recently wrote about the Thousand Fan Theory (TFT) and what it takes to build enough an audience to make a living as a game designer. Years ago on DriveThruRPG, Philip J. Reed demonstrated that it was possible to churn out quality, low-cost PDFs. Now he's moved that model to Kickstarter. But is it enough to make a living? I decided to ask him. 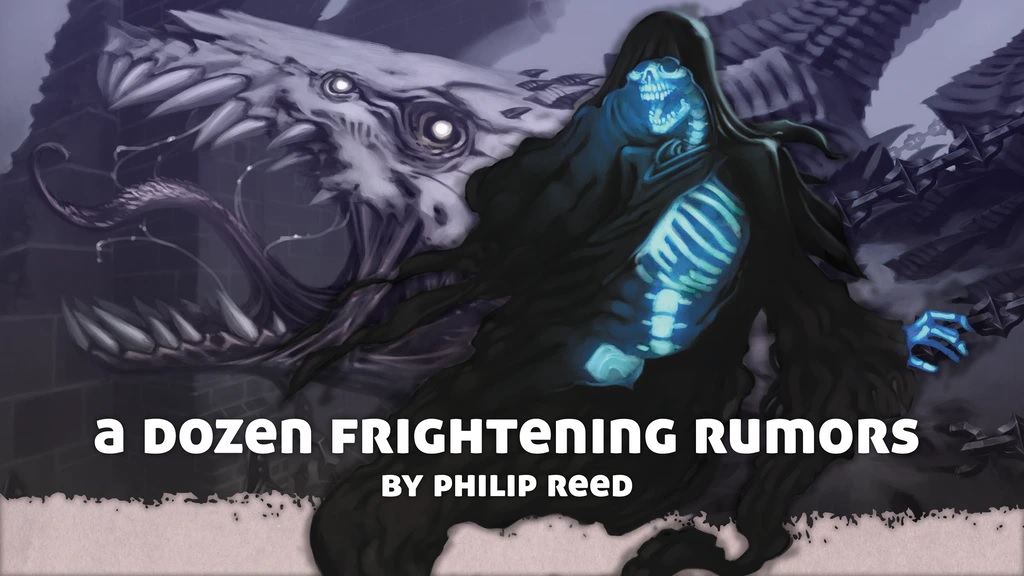 Mike Tresca (MT): Your recent Kickstarters are a call-back to the tactic that I noticed you used in the past: release a steady stream of small PDFs for RPGs. Can you talk a little bit about that strategy?
Philip J. Reed (PJR): Back in 2002/2003, when I first started experimenting with PDF publishing, my first few projects followed what others were doing. After releasing a handful of PDFs, I started to ask: what would happen if PDFs were treated more like magazine articles and less like books? What would happen if PDFs were priced at a buck or two? I soon learned that there was a demand for those shorter, low-priced PDFs that exceeded my expectations. At one time, I compared those $1 and $2 PDFs to the candy display at the checkout line in a store. Impulse items that someone would grab "because it is only a buck." Fortunately, the PDFs were entertaining enough that many of those first-time "it's just a buck!" buyers came back for more.

MT: DriveThuRPG has a "new" category whenever a product is first released which bumps it in front of customers, so I imagine keeping up a steady stream of products increases the visibility of not just the new product but all of your products. When you published so many small PDFs, did it help with marketing?
PJR: Many, many years ago, the "new" definitely had an impact on overall sales. By releasing something new every few days, there was always something on the "new releases" shelf to catch attention. And just as with the larger distribution sales of printed products, new releases helped drive sales of the backlist titles.

MT: Do you have a day job that's unrelated to gaming or another source of income?
PJR: The majority of my time is spent as CEO at Steve Jackson Games. My primary responsibility there is to manage the company for Steve, and to try and guarantee that everyone has a job and that we can continue to publish new games. The Kickstarter projects that I run are a sideline, a hobby of sorts that I use to keep myself sane. I enjoy creating and these Kickstarter campaigns give me an outlet for my personal works.

MT: Were you able to make a living off of the small-but-many PDF strategy? That is, rely solely on PDF sales as your source of income? And how about now with Kickstarter?
PJR: I spent almost three years in the mid-2000s publishing PDFs full-time. In early 2007, several things aligned in such a way that I accepted Steve's invitation to re-join the team. I've been working full-time at Steve Jackson Games for well over a decade now.

MT: You've adopted the same model to Kickstarter. How does the Kickstarter model differ from your approach to DriveThruRPG?
PJR: I am finding that Kickstarter is a far, far superior platform for the shorter, inexpensive PDFs than the tools that I had available in the early and mid-2000s. The Kickstarter site puts a deadline on projects and gives me a tool to reach several gamers at once. By using stretch goals (for some of my projects), I am also able to construct campaigns that are far, far more valuable to the backers which only incentives gamers to join in . . . before it is too late! It's not exactly FOMO -- the PDFs and such are often available later -- but the bargains offered in Kickstarter campaigns like A Dozen Frightening Rumors are just too good for many GMs to miss.

MT: How is the Kickstarter model working out for you? It seems like Kickstarter's doing even better than your multi-product approach on DriveThruRPG.
PJR: It seems to be going well. Out of the eight projects that I have run in 2020, six have been fully delivered, the seventh is in the final stages (PDFs deliver this weekend; print copies will start mailing in August/September), and the eighth is still in funding. At the moment, the eight projects combined generated almost $100,000 in funding. Of course, 10% of that goes to Kickstarter, a chunk goes to art, and a larger percentage goes to printing and fulfillment, but the number is one I am proud of regardless of the expenses involved.

MT: You've commented on my articles regarding the Thousand Fan Theory. In your opinion, is that achievable?
PJR: I think it is, but not as an overnight sort of event. Starting slow, and delivering quality work on schedule again and again, helps to grow an audience. I doubt anyone will hit 1,000 supporters all at once, but I think it is achievable over time.

MT: How much of what you produce is created directly by you vs. a larger team? How much does that impact your revenue from producing games?
PJR: At the office, we have a team that handles lots of different tasks. When it comes to my personal works, most of the time, it is me on the art selection (I license stock art), layout, writing, Kickstarter design and management, and print coordination. I have a friend who handles the physical fulfillment (if I had to pack and ship stuff, I'd be much slower at this). I say "most of the time" because I tried something new with The Book of Dungeon Encounters and paid co-authors to write sections for the book. It was an experiment and it is something I may try again in the future.

MT: Do you plan to retire? If so, will your game revenue constitute a part of that retirement?
PJR: I do, but I'm not 100% clear on what retirement even means for me. It may be that retirement is "I work a little less than I do now," or something else. Regardless of when I retire, I plan to keep creating and working on projects. It's just too challenging for me to not create; I enjoy making things.

MT: What's your advice for following your model of producing a large amount of inexpensive content? I suspect it's not for the faint of heart.
PJR: Know your limitations and plan to produce less than you think you can. With Kickstarter, it is too easy to over-commit during a campaign and then find yourself with promises that need attention. These days, for my personal works, I plan out the work before launching the project. For example, on A Dozen Frightening Rumors, I selected all of the artwork necessary for twelve different PDFs and prepared the look of all twelve before the project launched. In that way, I had worked out rough outlines for twelve PDFs before dollar one was pledged to the campaign. Of course, this sometimes means that you unlock all stretch goals before the project ends. That's just fine. It's better to say "all unlocked!" than it is to make a mistake in the heat of an active project and commit to something that you're not sure you can pull off.

MT: What's next for you?
PJR: Lots of writing? At the office, I've been working on new possible expansions for The Fantasy Trip and completed a new dice and card game that we will publish in early 2021. (Hack & Slash, which I don't think we have officially announced yet.) I've started work on Fantasy City Sites and Scenes III, a companion to two books that I released earlier this year. That may reach Kickstarter before the end of 2020. I also have the fourth issue of Delayed Blast Gamemaster in the works, though there is no planned schedule for that at the moment.

MT: Where can fans find out more?
PJR: For office projects, www.sjgames.com is the best place to visit. For my personal works, my DrivethruRPG page is a good place to look for info, and please follow me on Kickstarter so that you don't miss out on upcoming projects!

MT: Anything else you'd like to add?
PJR: Thank you! I appreciate you making time to chat with me about my work, and it means a lot to me that you remember those days so very, very long ago when I was writing and publishing PDFs full-time.

Mike "Talien" Tresca is a freelance game columnist, author, communicator, and a participant in the Amazon Services LLC Associates Program, an affiliate advertising program designed to provide a means for sites to earn advertising fees by advertising and linking to http://amazon.com. If you like what we do here at EN World (the Forums, Columns, News, etc.) and would like to help support us to bring you MORE please consider supporting our Patreon. Even a single dollar helps!
P

Supporter
Thank you for taking time to chat with me. I appreciate the support!

I really enjoyed a lot of what Ronin Arts put out back in the day. I've been meaning to go take another look at their back-catalogue.

Alzrius said:
I really enjoyed a lot of what Ronin Arts put out back in the day. I've been meaning to go take another look at their back-catalogue.
Click to expand...


Thank you. Most of that is no longer listed for sale online. I've been asked if I would update/rewrite some of the older content, but I am not sure of the answer at this time.

For now, I'm having too much fun creating new material to dig out the past works.

Good read. I've long thought that Phil Reed and the folks over at SJG's are some of the classiest people out there in the industry.

Paragon Lost said:
Good read. I've long thought that Phil Reed and the folks over at SJG's are some of the classiest people out there in the industry.
Click to expand...


Thank you! I know the team tries very hard to keep projects flowing and to meet our commitments on schedule. We fall behind, and things go wrong, but we try and fix the mistakes when they slip through.

philreed said:
Thank you! I know the team tries very hard to keep projects flowing and to meet our commitments on schedule. We fall behind, and things go wrong, but we try and fix the mistakes when they slip through.
Click to expand...


You all do a damn fine job. You communicate well, something that not all game developers do so well on. Oh and a biggie for me is that when you all update a product. You send out an email about it with a forum link with what was updated, usually done by Steve Marsh.

I could go on and on, but I think you get the key here, that I appreciate how you all operate and wish more game developers would emulate you all.

How do you feel about stretch goals?
2