Spectaculars: Easy To Play Superheroes In a Box!

Rodney Thompson. You may remember him from such games as Star Wars Saga Edition, Lords of Waterdeep, Dungeons & Dragon 5th Edition, and Dusk City Outlaws (to name just a few). He's back with a new superhero RPG, Spectaculars, and he's been kind enough to send me along an exclusive preview of the game! 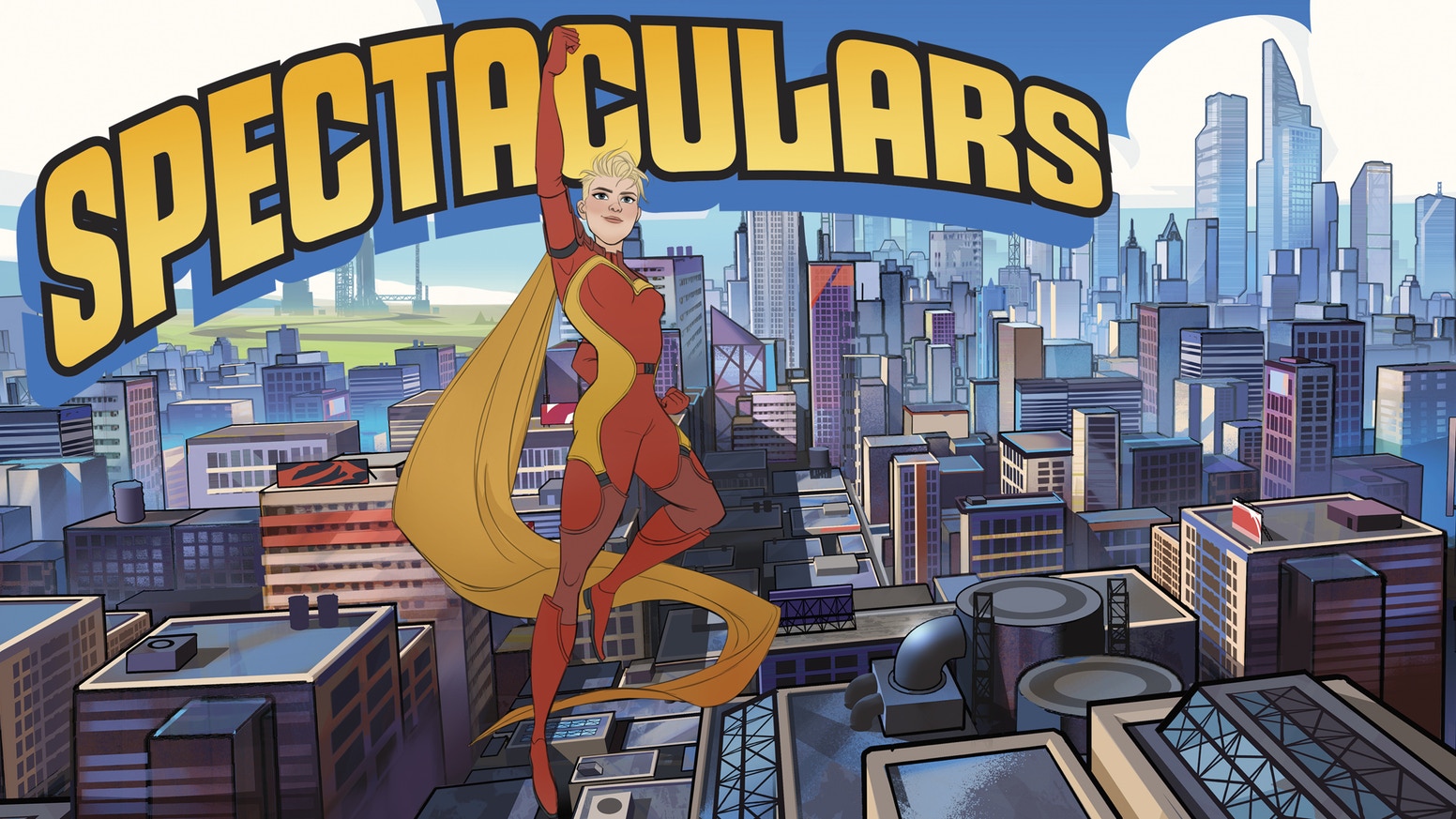 I backed Dusk City Outlaws on Kickstarter, and was super-pleased when it arrived. A gorgeous boxed set, it was a game themed around players planning and then executing a heist. Spectaculars is more of the same high production values - a boxed set containing a superhero game (the same game system, 1000AC, used by Dusk City Outlaws) with which the players create and shape their own comic-book setting during play. To that end, you get pages like the previews below, which are used to create elements of the universe. 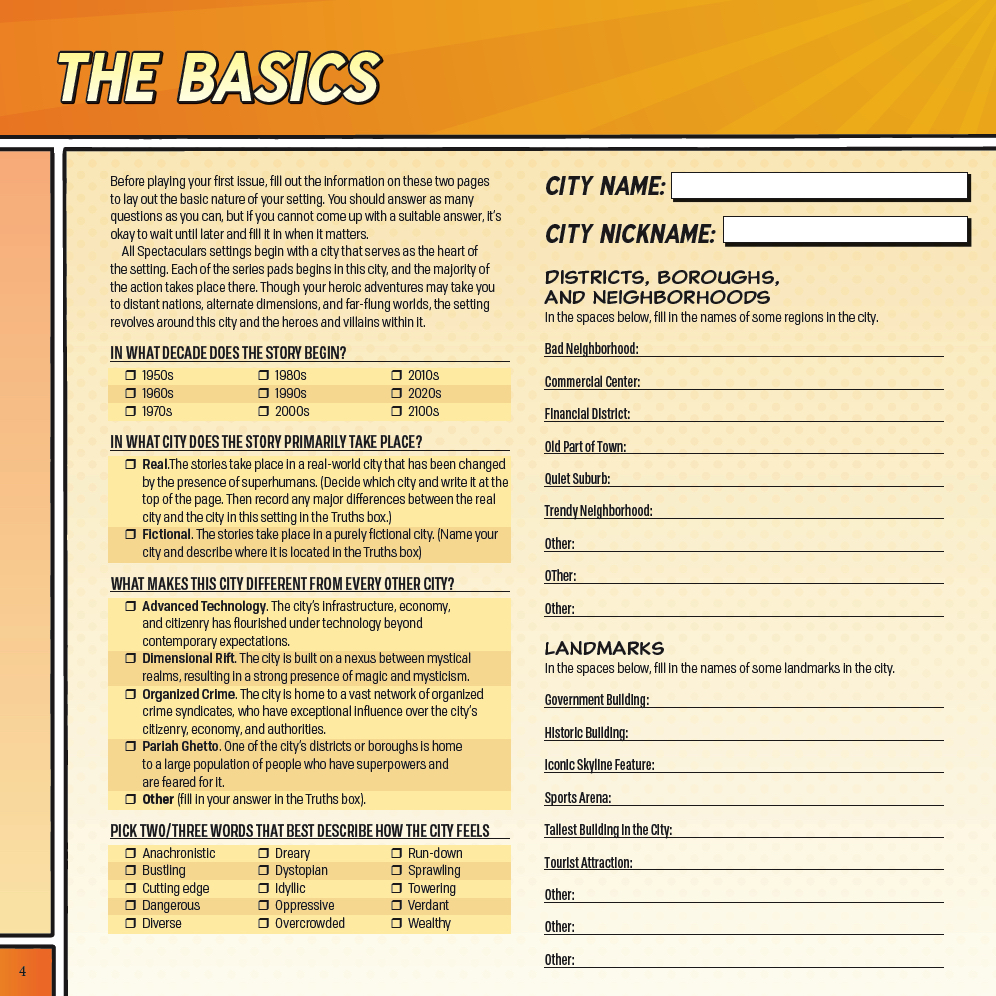 Here's how the rulebook itself introduces the game:

Spectaculars is a roleplaying game for three to five players where you and your friends take on the roles of superpowered heroes and struggle against the forces of evil. More than that, Spectaculars is an entire comic book universe packed into a single box, and it’s one that you create from scratch as you play the game. You define the setting’s most important aspects, you create teams of heroes to populate that world, and you tell incredible comic book stories set against a backdrop that you have crafted. Each Spectaculars box set is the equivalent of a unique comic book imprint, one that grows and evolves as you play through the stories it contains. 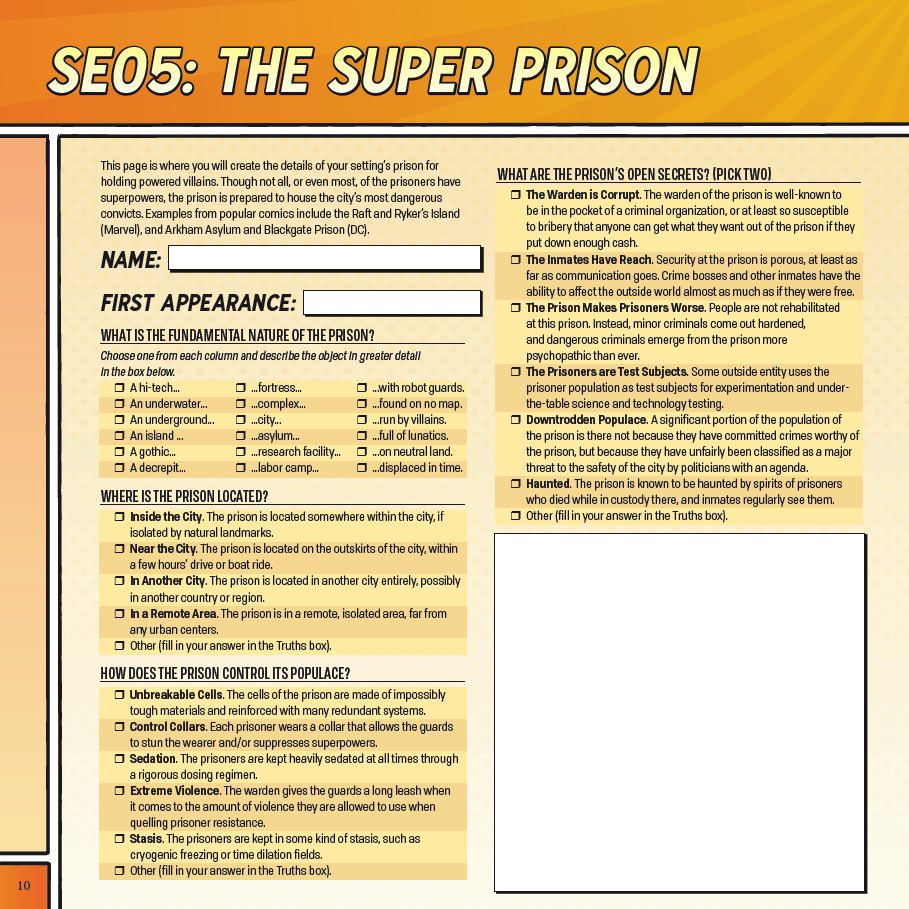 Character creation is similar to that of Dusk City Outlaws in that you combine a number of cards. It's pretty fast and simple. You create a character by choosing an archetype, then drawing some cards from a deck of power cards (flight, energy blast, super strength, and so on), and another deck of identity cards (your civilian life), and adding a team role card (artillery, leader, tank, striker, support). 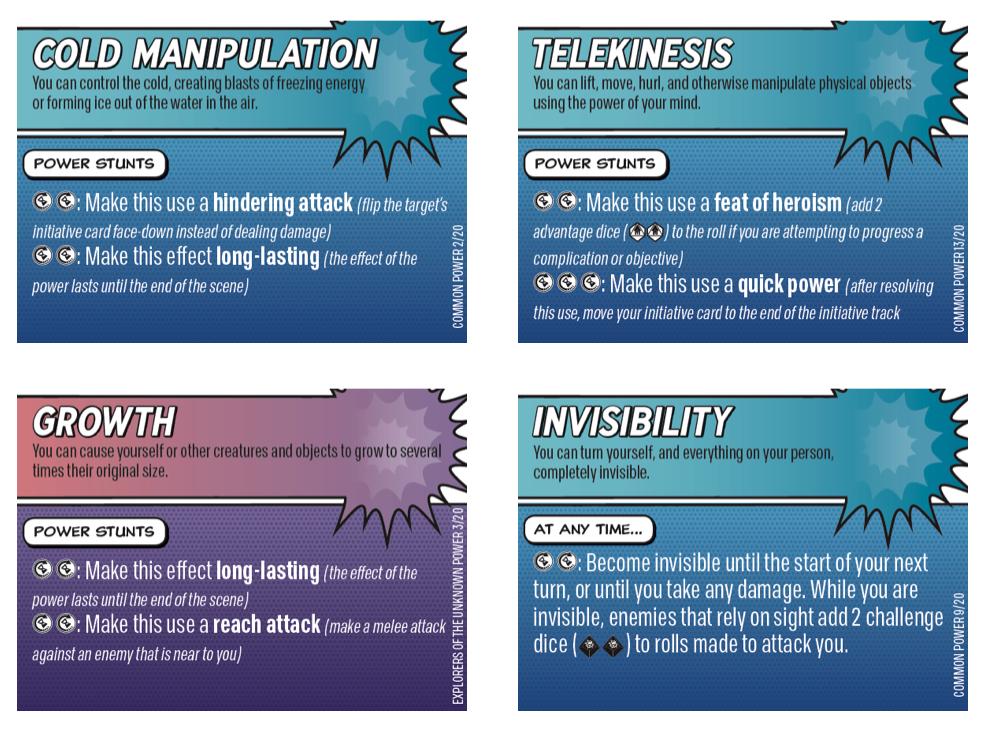 The boxed set comes with a rulebook, a setting creation book,"series pads" which contain scenarios and other elements, cards, dice, and tokens. The game itself focuses on four different styles of superhero game: street-level, super science, sorcery, and cosmic.

The game is aimed at letting you start play without lots of prep time. All the props and series pads, etc., are all designed to facilitate that. 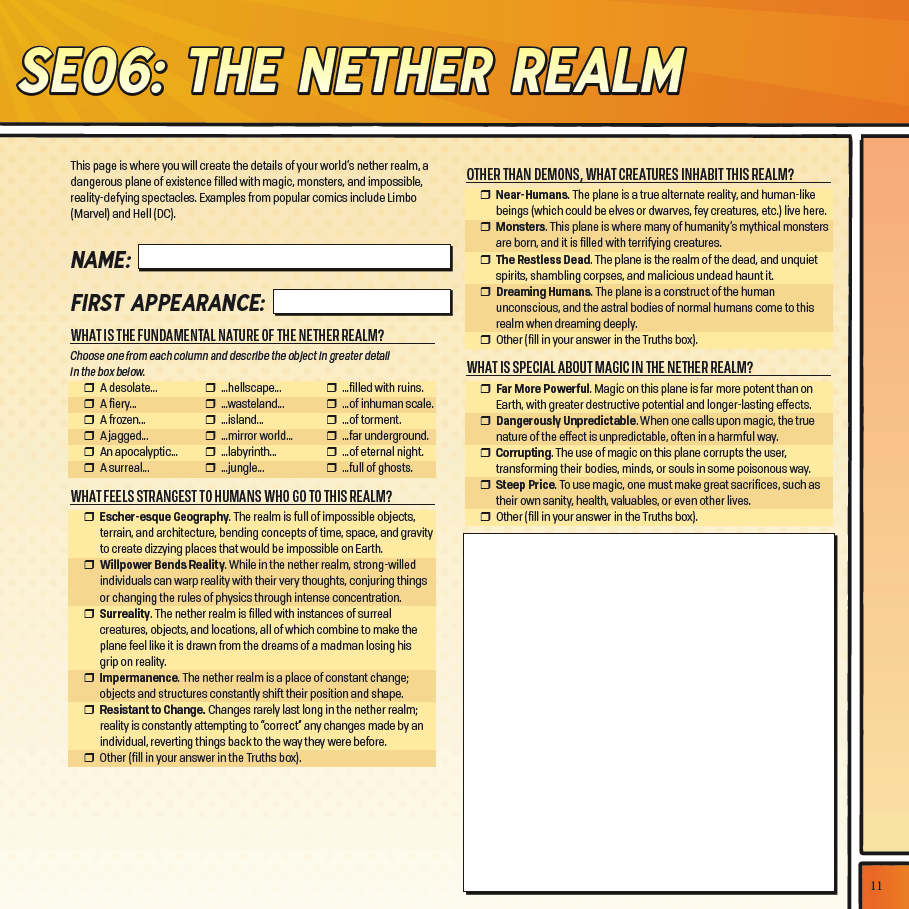 ​
Those "series pads" are key to the game. There are four pads - one for each genre. Each contains a selection of sheets, compiled into "issues", which includes a one-shot adventure, including villains and more. There's 50 issues in the core game, and each is designed for 2-3 hours of play. There's an example of one below (taken from the Kickstarter page). 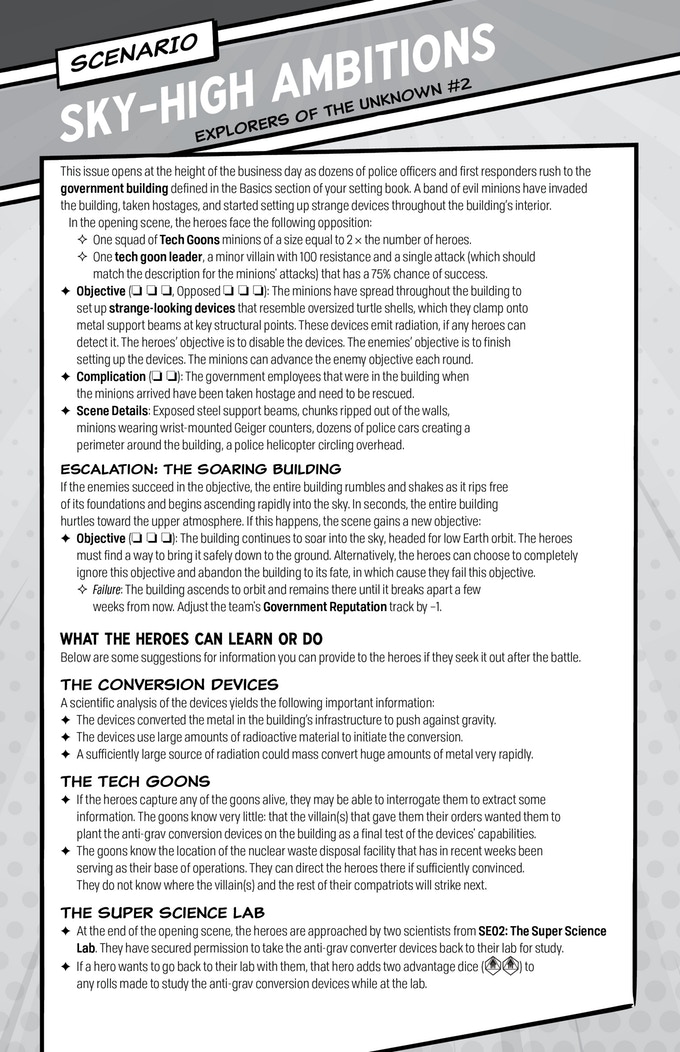 So where, you ask, can I get this? It's on Kickstarter right now! Run, don't walk... though you can fly if you like, I guess. I've had a look through the rulebook, setting book, and various cards, and they all looks gorgeous even before they end up on glossy cardstock!
Click to expand...

IIRC Rodney is going to be a guest soon on Morrus's podcast.

Rodney was kind enough to spare some time for an interview recently with me as well if you're curious for more until Morrus' interview appears:
[video=youtube;X4apzoVVZGI]https://www.youtube.com/watch?v=X4apzoVVZGI[/video]

Looks fine and I hope it does well. But I'd still give my left (insert body part) for a chance to play a good long campaign of Mayfair's DC Heroes (or the later Blood of Heroes repackaging of MEGS.) That's still my superhero RPG of choice.

Looks good, but the character creation by drawing cards is a big no for me. Random creation of supers may sound good, but there's always the chance of getting a totally useless character, or one that you just have no interest in playing. I know that creators of such systems insist that that's how many of the supers in comic get their powers, but it isn't really, the writers did it!

I agree on the random thing...it's fun to play with random gen just for entertainment, but it can really suck to make one pass through an RNG character creation and realize what you have just isn't interesting to you. Sometimes random elements are inspiring and really kick off creativity...sometimes they're just random and weird. If there's a provision for mitigating that possibility, I'm more on board with it.

However, since ALL my gaming is online, the use of physical cards from inside a box really does limit this system's appeal for me. It sounds like it's not being marketed for online play though, so really that's less of a criticism of the product than just an acknowledgement that I'm not in this product's demographic.

Aaron L said:
Looks fine and I hope it does well. But I'd still give my left (insert body part) for a chance to play a good long campaign of Mayfair's DC Heroes (or the later Blood of Heroes repackaging of MEGS.) That's still my superhero RPG of choice.
Click to expand...

The random thing will be devisive (I personally like it) but as Rodney said in my interview with him each table can play as they choose if they don't like that aspect.

Wasn't d20 Spectacular the title of the cancelled d20 Modern sourcebook about superheroes? About this genre in the rpg industry now we don't need to buy books about background and lore because there are lot of wikis and most of players would rather to create a homebred mash-up version of DC, Marvel comics or other publishers.

I still think it's the best superhero RPG ever made. The logarithmic scale power ratings make battles between Superman and the Batman actually possible, if severely lopsided... just like in the comic book source. Defining every unit of measurement and rankings of character abilities as APs is just so elegant and fits the superhero comic style so perfectly, I cannot understand why someone somewhere hasn't tried to republish the MEGS (Mayfair Exponential Game System) rules in some form again in recent years. I think a Kickstarter for a MEGS supers RPG would do astoundingly well. I know that Writeups.Org is still up and running strong, archiving MEGS stats for thousands of superheroes and characters from comic books and other media, so it still has great support from the fan community. I would have thought that someone would have looked at that great community and realized that they'd be eager to buy some new books.

But maybe MEGS is in legal limbo after the Blood of Heroes books were published. I don't know the legal situation of it at all. It's just too bad, it's such an amazing system.

I agree, the exponential AP system was very well done. My guess is it's a legal thing ... Mayfair was acquired by essentially a holding company so someone would have to license it. But it's a great time for someone to try.

Staff member
We recorded out interview both Rodney today. It was long, and covered not just Spectaculars, but his work on D&D 5E and Star Wars Saga Edition, too. Should be out Wednesday.

sstacks said:
The random thing will be devisive (I personally like it) but as Rodney said in my interview with him each table can play as they choose if they don't like that aspect.
Click to expand...

Yes, don't have to do random character generation. And even if you do, it's not totally random. Players get five cards from which to choose 1-3 powers. Choosing less means you get more hero points. There are also, I think five powers, anyone can choose from, such as flight and super strength.

Just managed to get funded. Don't think they will hit many of the stretch goals, but the game will come out.