The crew of the Oliphaunt has gone from rags to riches... and then lost everything to their rivals. Now, at last, it's time for payback! Their longtime enemy, Lord Sinjin, drow master of an interplanetary crime family, dwells in a secure fortress surrounded by an army of henchmen. Getting in is impossible. Instead, the crew must lure him out with bait he can't refuse, bringing him to a remote space station and a deadly ambush. But Sinjin didn't survive this long by being easy to fool...what happens when the hunted becomes the hunter?

"The Gilded Cage" is a Starfinder adventure for four 11th-level characters. This adventure concludes the Fly Free or Die Adventure Path, a six-part monthly campaign in which players take on the role of a merchant crew with an experimental starship, trying to get rich, escape interplanetary assassins, and outwit their rivals. This volume also includes advice on continuing the campaign beyond level 13, and full details on Smuggler's Moon, an elite paradise and refuge for the galaxy's most illustrious and wealthy criminals. 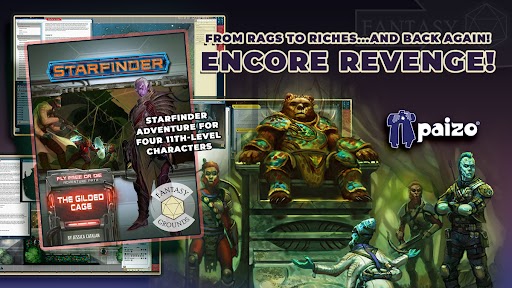 News Digest for the Week of May 29