Hello my hooligans and buckaroos, and welcome back to the PAIZO NEWS ROUNDUP! We have a special edition of the Roundup this time around as we dive into the latest release of Starfinder on Alexa, the first foray into interactive audio adventure on your home Alexa device. Today we’re taking a look at episodes 4-6 of the Dead Suns Adventure Path, which for those keeping track at home will get us all the way through Incident at Absalom Station. 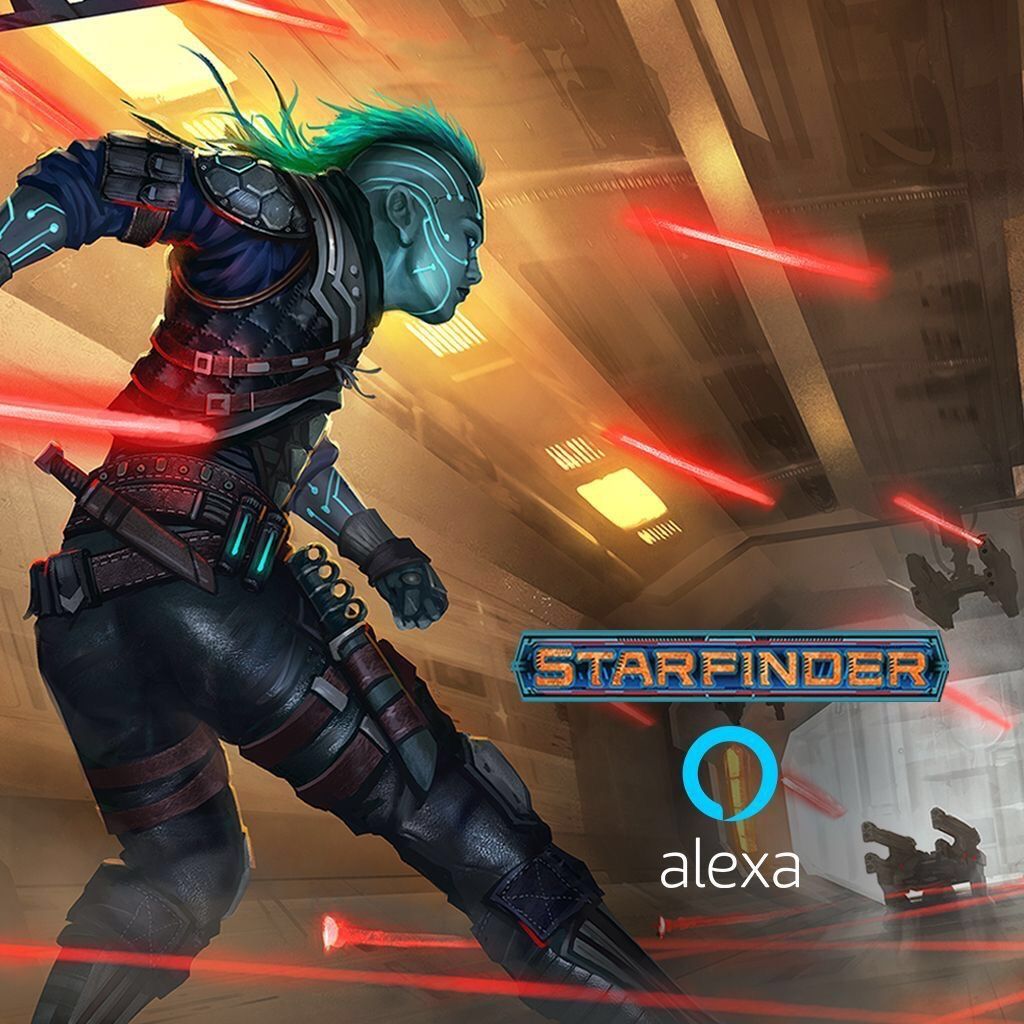 Playing through these three episodes will take about 3-4 hours if you’re keen to do it all in one sitting, but each episode is only about 60-90 minute apiece (depending on your decisions and luck) and are further broken up by checkpoints where Alexa will ask if you want to take a break or keep going. Points for humane game design there! As for the actual adventure, the streamlining evident from both the tutorial and the first three episodes is still on display, keeping the action moving and the challenges appropriate for the reduced party size.

The sound design also continues to be excellent, with dedicated sounds for different weapons, various bits of foley, and even voice modulation when characters are speaking on comms. I was quickly conditioned to recognize the sound used to indicate rolling dice as well as success and failure, although there were a few times where the game rolled (likely for perception) and it wasn’t clear what difference was made. That’s definitely one benefit of playing with a robotic DM – they have the ultimate poker face!

I had a few quibbles with the experience, likely tied to the adaptation from TTRPG to voice-driven interactivity. There’s very little opportunity to backtrack – once you start exploring a space ship, for example, you aren’t able to swing back and check on rooms you may have missed in your haste to progress – so be thorough and patient in your travels to avoid missing out. After all, if there’s one thing you can be sure about, it’s that Paizo adventures expect you to knock down literally every door before giving you the one you need to progress. Just be sure you actually do everything possible in a room before you move on; part of the adventure revolved around plugging some doodad into a computer, and I don’t remember getting the option to do that and getting some blowback from a questgiver as a result.

Also, the inventory management experience left a little to be desired. I was playing as the powerful soldier Obozaya, and I much preferred beating things with my doshko over shooting things with a rifle. And yet at every opportunity to buy new equipment, the game seemed to expect a ranged playstyle. I feel like that’s understandable – the prompts during combat are quick to suggest taking cover for defense against ranged attacks, and I did eventually get a chance to swap out for a more powerful weapon, but a bit more variety would have been welcome. The lack of choice was especially pointed when one of my companions opted to pick up a magical weapon fusion, an option unavailable for the entirety of my playthrough. I also would have liked to be able to sell the equipment I didn’t need, namely gear I wasn’t using or had replaced with superior versions. That said, the Starfinder on Alexa team probably wanted to avoid situations where players accidentally sell their entire inventory, so I didn’t mind too much. 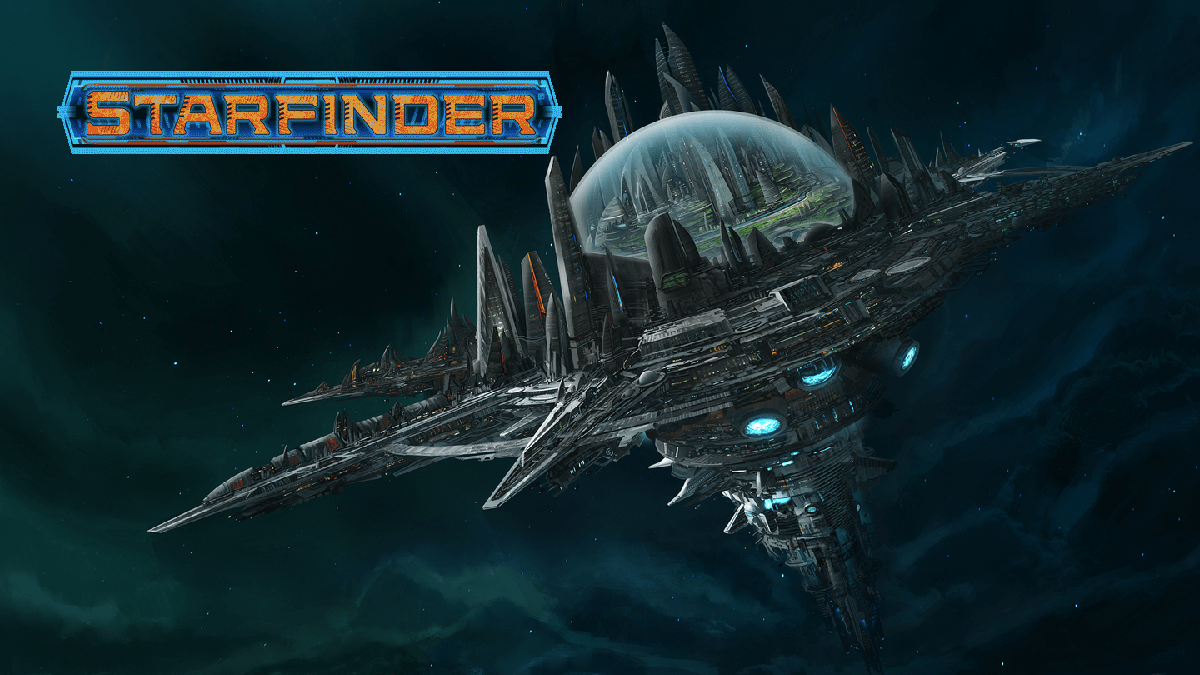 That’s enough nuts and bolts, though – what are the last three episodes like to play? A great deal of fun, as it turns out! There’s character and humor aplenty here: some space goblins show up long enough for them to defend their title as my favorite things in Paizo products, and there are some pretty good one-liners to be had from nearly every NPC. I also hugely appreciate the fact that most combat encounters featured some way of bypassing or abbreviating them – use stealth to sneak by, influence to bluff past, or some daredevil stunt to tip the odds in your favor once bullets start flying. Excellent game design! Chapters 4-6 also introduce a few more prominent NPCs that stick around for more than a scene or two, one of which can become a romantic partner for the PC. I, of course, jumped at the opportunity, as I was playing as 300 lbs of vesk soldier, and there’s something inherently funny about a tender romantic kiss between a robot and what is functionally a person wearing a rubber tyrannosaurus mask.

Starfinder on Alexa episodes 4-6 also sees the continued presence of their all-star voice cast, most notably Nathan Fillion and Laura Bailey. Nathan Fillion’s character (an awkward, nerdy, pencil-pusher), doesn’t get a lot of screen time, but play your cards right and he’ll get a big damn heroes moment and you’ll get a cheeky achievement reminding you that yes, in fact, Nathan Fillion was in Firefly. Laura Bailey shows off her chops as a voice actress by completely disappearing into her role. More than once I had a passing thought of “Isn’t Laura Bailey supposed to be in this? Maybe I’ll recognize her later”, only to realize at the end credits how well she had taken to the Starfinder universe.

In sum, then, the Starfinder on Alexa experience is an entertaining romp through the first act of the Dead Suns Adventure Path, with excellent production design and clever gameplay and design that more than make up for a few moments of adaptation awkwardness. I enjoyed my time playing, and I’m definitely going to pick up the next few episodes when they drop. Till next time, my friends!
Click to expand...

How easy would this be to play by someone who is only vaguely familiar with Starfinder? Or who played Pathfinder but not Starfinder?
I'm considering buying this as a holiday gift for a friend.

I love this- I have a 3 year old and with the pandemic I haven't been able to play in person for some time. Not a Starfinder fan or Pathfinder fan, but because of this I have turned into one. There is a level of you respond to the choice given to you and then listen to a lot of text about what is going on and why. I didn't mind this. The long listens reminded me sort of the old Choose your own adventure style books. I'm not sure there is an instant crossover if you like Pathfinder you'll like Starfinder- but, on its own, it is a lot of fun and disappointed that it is over. Worth the $$ and time. Personally I think that I have gotten more than 3-4 hours of playtime.