ZEITGEIST Strength of the Puma | a campaign set at Pardwight University

My ZG campaign has been on hiatus since the pandemic began. We were just about to start adv7, which we really want to be back in person for. So how do we keepalive interest in the campaign and setting during the long break? Wacky side adventures!

As you are probably aware, there have been two excellent "Hogwarts-but-not" fantasy modules published lately: Strixhaven (DnD 5e) and Strength of Thousands (PF 2e). I am attracted to the idea of magic-school hijinks, but I have no interest in the settings the two schools are placed in. But I do have a lot of interest in the Zeitgeist setting. The stars aligned, and the conclusion was obvious.

This week we kicked off Strength of the Puma, set in Flint in autumn of 500 AOV, ready for the start of the fall semester. (I decided to lean into the fact that the Puma was the school mascot of Pardwight U, and that students are colloquially called 'pumas'.)

In order to get some fun going on, we did lifepath character generation. The latter half, I cribbed from Paizo's Ultimate Campaign, but the first half, I had to write up myself. I'll share it with you in the next post.

What I'd like help from you, o forumites, is what to do for students' "houses" at Pardwight. I don't particularly like Strixhaven's or Strength's houses, and I'm not going to reuse Hogwarts', as wonderful as they are. I'm kinda tempted to model the houses after the fey titans, but that kinda conflicts with the "puma" thing I have going on, and since Pardwight is as much an engineering college as a magical college, that doesn't feel quite right. Any ideas?

Then choose or roll on the appropriate race & hometown tables

If you are Human, and grew up anywhere in Risur except Flint gain Trait access: Planar Savant (faith).

If you are a Human or Tiefling, and you grew up in any of the cities of Danor, roll on Table 1-39

(Jotunn-blooded are mechanically the same as Half Giants, but make must take the "Cold Acclimated" and "Liberty or Death" racial options, and replace "Naturally Psionic" with the Dwarven racial trait "Death's End".)

If you are Half-Eladrin and you grew up in Crisillyir, gain Trait access: Forlorn (race).

If you are a Deva, gain Trait access: Reincarnated (Faith).

Ber's table is organized inside-out. Figure out homeland first, then if necessary, figure out race.

First roll a d6 and read down the left-hand column to see which planet you were born under.
The roll another d6 to determine how strong the conjunctions and alignments were at that time. Strong influence includes the all effects of weak influence.

Our students so far:

Danorian Human from Beaumont, who later joined the circus and became a swindler
Risuri Human from Shale, whose entire family died in the 4th Yerasol war, and has gone a touch nutty
Danorian Tiefling from Cherage, whose set to inherit the family's dubious business connections with Arrovia
Risuri Human from Slate, who moved to Flint, fell in with the Kell Guild, and now wants out
Berian Gnoll from the south (continental), who is a premiere athlete in the sport of blood pig
Risuri Human from the deeps of the Antwalk Thicket, who aspires to become a Skyseer

This is amazing, but I'm busy tonight. I'll have to check back in when I have time to absorb it.

If you don't mind a clarification, the Gnolls of the southern isle of Karch are actually modernization fanatics, introduced to armor-forging by their dragon Steel Lord and now keen on industrialisation. They do have a religious practice where they believe it is wrong to touch metal with bare skin/fur, thus they all wear gloves when working iron.

Of course, might be your own homebrew/changed events at work there.

efreund said:
I'm kinda tempted to model the houses after the fey titans, but that kinda conflicts with the "puma" thing I have going on, and since Pardwight is as much an engineering college as a magical college, that doesn't feel quite right. Any ideas?
Click to expand...

It's unlikely that engineering was introduced more than a generation ago. Risuri king is equal to the titans, so it's possible that a new house of Kelland was founded by Aodan 30-something years ago.

There are five houses at Pardwight University, each loosely modeled after one of the great Fey Titans. Over the years, each house has produced many brilliant graduates, and in turn, each their share of dropouts. Pumas can join a house once they become attendants. Nearly every student ends up joining a house, as this confers valuable structure and social connections, but this is not mandatory.

Wisdom through loss, progress through setback, and the hunt for truth amidst the wreckage of failure.
Ashbearers tend to be introspective, and have a reputation for being the most emotionally mature of the houses. While all houses perform chartable work, the Ashbearers have a stronger tradition of doing it well compared to the other houses. They straddle the divide between modernity and tradition, working to bring forward the ashes of the past into a new world order. Never forget, but never stop growing.
Patron: Ash Wolf
Insignia: hands holding a bowl with smoke arising
Allied houses: Sorority, Gremlins
Rival houses: Thunderdome, The Voice

Progress will lead us to pleasure and prosperity!
Pumas in Thunderdome embrace a fast lifestyle, believe in progress for its own sake, and aren’t afraid to break things. Undeterrable optimists, they pick themselves up quickly and move on to the next great venture. While they work study, perhaps exhaustively so, the Thunderdome also has a well-deserved reputation for being the party-house at Pardwight University. Work hard, party hard.
Patron: Father of Thunder
Insignia: three lightning bolts forming a triangle
Allied houses: Sorority, The Voice
Rival houses: Ashbearers, Gremlins

Secrets lie in every direction, hidden in the dark, in the light, in between.
Gremlins are curious, insatiably so, and have a strong penchant for questioning others’ assumptions and priors. The house has a reputation for harboring the most intelligent, as well as the most socially awkward, Pumas. Gremlins tend to favor pure science and publishing papers over engineering and creating physical inventions. They have no compunction against discovering the most modern of secrets, but can manifest a conservative streak when it comes to applying those principles in the real world.
Patron: Granny Allswell
Insignia: two non-aligned eyes
Allied houses: Ashbearers, The Voice
Rival houses: Thunderdome, Sorority

The Sorority of the Sea​

We can change you, come and see.
In the earliest days of Pardwight University, women were not allowed to join any of the houses … so they founded their own. Today, all houses have an open recruitment policy, and even after the Sorority merged with the all-male Triton house, the name stuck. Pumas in the Sorority emphasize community engagement and development in ways that can bring society along with it. Ironically, this leads the Sorority to now be one of the most conversative houses, as they (rightly) point out that much of Risuri culture isn’t ready to realize radical change.
Patron: She Who Writhes
Insignia: one ship towing another
Allied houses: Ashbearers, Thunderdome
Rival houses: Gremlins, The Voice

Listen.
Brimming with self-confidence, the Voice seeks truth and proclaims their truth to others. Though their preferred medium is through publishing papers, many are also gifted public speakers. Known as taboo-breakers, Pumas in The Voice would prefer to be known as “pragmatic.” The house can have a nihilistic streak, and seem to have no trouble reconciling the fact that all they learn is simultaneously ‘very important’ and ‘worthless, in the grand scheme of things.’ Perhaps that’s how they justify all the necromancy? Ironically, The Voice does not speak with one voice, and the house harbors staunch conservatives as well as radical progressives, who seem to delight in tearing dueling one another via the weapon of well-tuned rhetoric.
Patron: The Voice of Rot
Insignia: a snake skull, with the mouth open, ambiguously about to speak or to strike
Allied houses: Thunderdome, Gremlins
Rival houses: Ashbearers, Sorority

arkwright said:
If you don't mind a clarification, the Gnolls of the southern isle of Karch are actually modernization fanatics, introduced to armor-forging by their dragon Steel Lord and now keen on industrialisation. They do have a religious practice where they believe it is wrong to touch metal with bare skin/fur, thus they all wear gloves when working iron.
Click to expand...

My understanding is that in 500 AOV (when my Puma campaign is set), much of that was still under wraps.

When my main campaign played through adv6, I played Pardo up as a strong anti-technological luddite. It really confused the party when he went outside the Royal Palace to "call down the judgement of the Steel Lord" and he acted as if he was casting a spell, and then artillery shells started dropping from the sky. It further confused them when he took damage in the ensuing combat and I swapped out his character art for this: 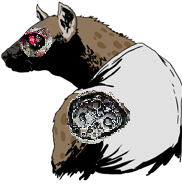 Also, I'm being a bit coy on my own lifepath table. Within the "Gnoll Cultists" section, there's a redirect to "Table 1-35" which is then filled with technological / gunslinger traits.

Looking over the AP, you might be right. Book 1 only says that the southern coast gnolls refuse to join the nation and 'have a violent and messianic faith in the eventual return of their slain dragon tyrant Gradiax, the Steel Lord'. There's definitely nothing to say that most Berans would know what's going on in Karch, and decent reasons why the knowledge would be kept from the public. Good call!

Oooh nice Pardo art, my own is a bit more basic, heh.

D&D 5E Strixhaven: Curriculum of Chaos - I have no clue what this is about
2