Symbaroum: A Dark Swedish RPG Being Translated To English

Symbaroum is a Swedish roleplaying game and setting whose creators ar elooknig to crowdfund an English translation. The Swediish version launched in July 2014, and the English version will be a 260-page softcover. From the images on the Indiegogo page, the art looks impressive, and you can download a PDF of a Quick Guide to the ruleset for free.

The translation is apparently definitely happening - the crowdfunfing project is just to speed that process up. Rewards include the PDF for $20, or the softcover for $29 (plus shipping).

The free Quick Guide is here, and the Indiegogo camapign is here. 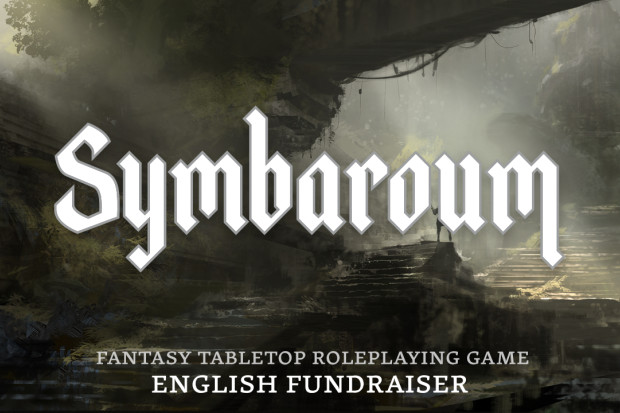 Looks like they'll need more money to cover the cost of a good translation, and I understand from the description that they're still looking for translators. Around $6000 for 260 pages at an estimated (conservatively) 300 words per page works out at around $0.075/word (and I assume that's not including VAT).

Great art, nice intro video . . . and it looks suspiciously like living in Seattle. I love it!

I'm chewing my way through the Quick Guide, which looks like it has a bad link above. Here's another:
https://www.dropbox.com/s/fkpkm33wfdmap3p/Symbaroum Quick Guide.pdf?dl=0

Epic
There is something in the atmosphere of European games, they just seem richer.

There are also 3 sample characters as well as some other info on the IndieGoGo page under Snippets.

Looking forward to this.

Did I read this right? To accomplish things with a die roll, you roll under your attribute, and your opponent's attribute (or the difficulty) adjusts your score on a point-for-point basis?

Simple enough. I love the racial selection too: human, goblin, ogre, changeling. I hope Troll is in one of the expansions...


Hand of Evil said:
There is something in the atmosphere of European games, they just seem richer.
Click to expand...

I suspect they feel the same about playing American games.

DMMike said:
Did I read this right? To accomplish things with a die roll, you roll under your attribute, and your opponent's attribute (or the difficulty) adjusts your score on a point-for-point basis?
Click to expand...


That's how I understand it. Though you don't subtract the opponent's total attribute value. It's converted to a modifier what's subtracted, I think.

Hi guys, I'm the graphic designer at Järnringen who is behind this project. Lovely to see the campaign here, and it is really exciting now in the last couple of days - we are currently at 93% and the funding graph is looking very positive.

Just to clarify; if you're not content with just a PDF or a soft back, be sure to check out the other pledge levels which include printing qualities ranging from print on demand versions, to offset high quality books (of the same quality as the Swedish edition seen in the fundraiser) to the super exclusive Nightbane edition which is limited and bound with artificial leather and golden details. We really care about the physical quality of our products and want to offer you the best we can.

Kcinlive said:
That's how I understand it. Though you don't subtract the opponent's total attribute value. It's converted to a modifier what's subtracted, I think.
Click to expand...

Exactly. If you have Discreet 13 and want to sneak past a guard with Vigilant 15(-5) you want to roll 8 or lower on a d20 (13-5=8). Adding to this is that all rolls are done by the players, the GM doesn't even have dice but can focus entirely on the drama and the story.

The conversion between attributes and modifiers might be simple when you know it, but it's still great that a table that makes things crystal clear will be included in the english edition.

DMMike said:
I suspect they feel the same about playing American games.
Click to expand...

DMMike said:
I love the racial selection too: human, goblin, ogre, changeling. I hope Troll is in one of the expansions...
Click to expand...

Troll is indeed one of the five new playable races in the upcoming Spelarboken.

So, time to revive this thread!?

Mattias Johnsson, Producer of Symbaroum here. Being new to ENworld I have to write some posts before I can show you images and forward links, but the game has launched now and has been greeted with ... let's be modest and say enthusiasm.

If you have any questions I'm happy to be of service. The more questions I get, the more I will write and the faster I will be able to pimp my posts with Symbaroum artwork!

Welcome to a British website populated mostly by Americans, Johnsson!

Let's get you pimping...

Question 1: does the game have special rules that add to atmosphere, beyond the normal conflict-resolution stuff? Because the artwork I've seen cries "atmosphere!"

Thanks for the welcome! When I found out that three posts was all it took to unlock the posting of picts and links I quickly filled the quota and uploaded the press release [http://bit.ly/1NKbnlj]. But since I gladly talk about the game, why not have a Little Q&A right here for those who prefer ENworld over Reddit (where we currently have our international forum).

The main conflict or theme of the Symbaroum game is Civilization vs. Nature, summed up and made precise with the question: "What would happen and how would it appear, if Nature had the capability to react on being cultivated and exploited?" This is mirrored in the rules by something called Corruption. In the CRB it is described as follows:

“Power corrupts, and in Symbaroum quite literally so. A fundamental principle in Symbaroum is that when nature it exploited or violated it grows dark and vengeful – and strikes back! The darkness that comes alive in this way lives on and can continue to infect its surroundings. Since Mystics bend and warp nature according to their will, they are constantly threatened by Corruption. And when looking at the ruleset, this principle is mirrored in the concept of Shadows and in creatures like Abominations and the Undead.”

In practice, when your PC performs such an act (casts a spell, weaves a ritual, activates a mystic artifact etcetera) he or she must roll a dice to determine how much temporary corruption he/she is inflicted by. Also, there are beasts which can spread corruption with bites and claws, and regions in the forest of Davokar where you get tainted just by breathing. The CRB explains:

“Corruption starts at zero (0) and grows as the character gets tainted. A character is technically transformed into an abomination when its Corruption value exceeds its Resolute value. Yet, long before that, the character starts to show physical signs of its growing taint, in the form of Stigmas.”

Oooops, that became longer than intended. And still I have only scraped the surface … Well, let’s leave it like that for now and celebrate that I can post pictures by offering you a look at a couple of the abominations mentioned above ... ;-)

This looks and reads pretty cool! Maybe I can waive my "you already have enough RPG systems you'll probably never play" rule for Symbaroum.

I gather you don't have a German translation planned?

Actually, Jan, a German translation is underway (Prometheus Games acquired the license about 7-8 months ago). By the way, there are other translation deals in the making too. And you WILL want to play this one, at least according to the feedback we have gotten this far. Better not take my word for it though ...

The links below will take you to two of the few reviews that have been posted so far. The first one is shorter and more to the point, the second more in-depth and nuanced. Please note that both of these are commenting on a pre-print PDF; some corrections and clarifications have been made since then:

(At least for me, that was a completely new TLA)

Johnsson said:
Actually, Jan, a German translation is underway (Prometheus Games acquired the license about 7-8 months ago). By the way, there are other translation deals in the making too. And you WILL want to play this one, at least according to the feedback we have gotten this far. Better not take my word for it though ...
Click to expand...


Ah, that's great to hear! I'll be sure to follow Prometheus Games' development, though the first message I found was a shift from spring to summer next year.