Synthicide: Sharpers in the Dark: An Interview With Dustin DePenning (Will Power Games)

Synthicide is a fun system, one that I’ve played a great campaign in. Original creator, Dustin DePenning, is bringing back Synthicide using a new system. Dustin talks about the original version, the new version, and what he’s doing next. 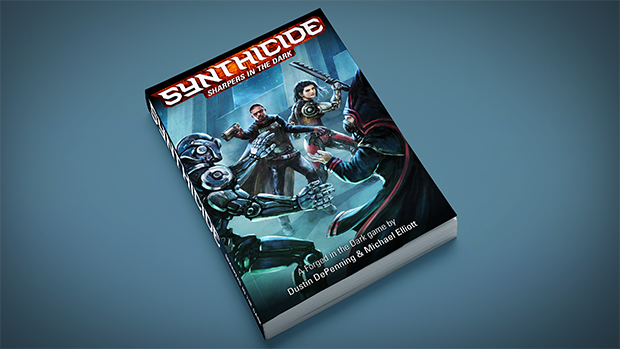 EGG EMBRY (EGG): Thanks for talking about your new version of Synthicide. What can you tell us about this project?
DUSTIN DEPENNING (DUSTIN): Synthicide is an electrum bestselling game on DriveThruRPG. It came out in 2017 to positive reception, and now is the time to release it again in a new and more accessible format using the Forged in the Dark system.

EGG: In the game, it is the far future and the highest form of life is mechanical and human life has not value. Yet, this is different than, say, The Terminator. How is it different and do you play as robots or humans or other transhuman options?
DUSTIN: The reason human life has no value is that an evil tech cult took over the galaxy. The game setting is slightly inspired by Isaac Asimov’s Foundation series, but with the twist that what if the cabal of scientists that are rebuilding a collapsed galaxy valued technology more than human life. From there, the game pulls in cyberpunk themes. The players are planet hopping criminals completing missions to pay for food and fuel. Because their lives have no value, they have to always keep one eye over their shoulder. In the game you can only play as a human, but you can choose varying levels of cybernetics and mutations.

EGG: You are moving from your original system to an existing system, why make that move? What made Forged in the Dark the right system?
DUSTIN: When I started getting feedback on the first release of Synthicide, I noticed the element that was most loved was the setting. There were fans that liked Synthicide’s tactical grid combat, but there was a bigger group that was taking the setting and porting it to other systems. The most popular system people were using was the Forged in the Dark ruleset. So I figured why not make what people want? Take this clever setting and make an official Forged in the Dark re-release.

EGG: What rules are you altering from the “core” concepts behind Forged in the Dark?
DUSTIN: The first big change is the introduction of bio classes. Your character has a playbook sheet like most Forged in the Dark games, but the bio class sheet lets you define how mutated and/or cybernetic your character is. Mixing the two sheets together let’s you make many interesting combinations. The next big change is the resolve and cynicism system. It’s similar to stress and trauma, except your character suffers emotional and psychological harm that makes them jaded. If they gain too many cynicisms from pushing too hard, they betray the crew, or get lost in vices, or just run away to never be seen again. However, cynicisms are not permanent. Once gained you can spend downtime to work on project clocks that represent humanitarianism and sacrifice to rebuild your emotional health and re-connect with your fellow humans. The last change is the strong emphasis on economic struggle. Food and fuel is expensive, and money is also needed to buy cybernetics, fund your downtime activities, or pay for life saving surgeries. It’s hard to get enough money to cover everything you want for your character.

EGG: Beyond the system, what parts of Synthicide: Sharpers in the Dark are different than the original?
DUSTIN: We’ll be adapting the game’s lore into usable factions and location specific missions to make running a campaign as easy as possible. The lore will be fully integrated with the system instead of just draped over. 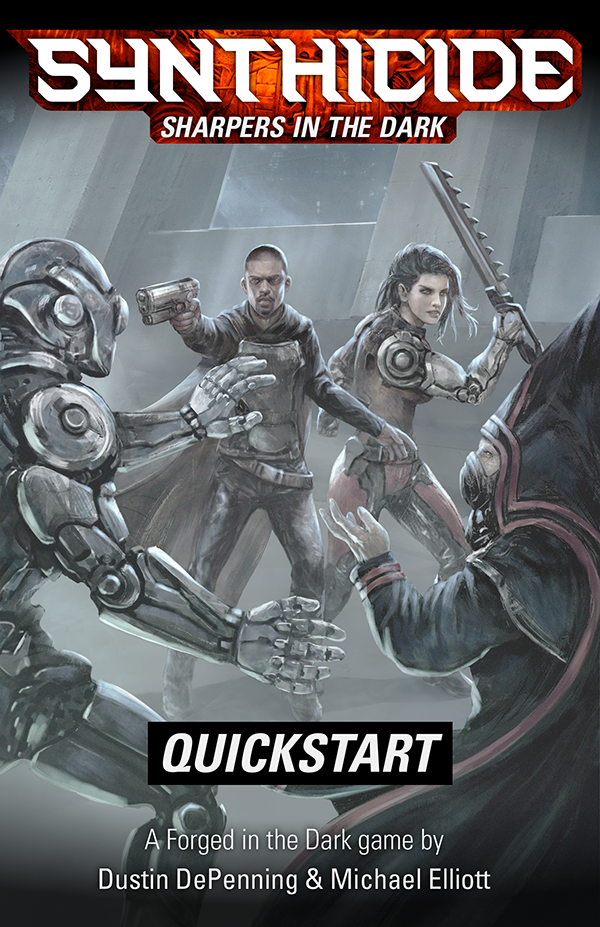 EGG: You have a free preview, Synthicide: Sharpers in the Dark (Quickstart). What does this book offer?
DUSTIN: It previews the core rules, three playbooks, three bio classes, one crew, and one spaceship. It also includes a mission outline. This is enough to run a full session and see what the game is all about.

EGG: Does this project mean you’re done with the original system for Synthicide? Or will you continue to support it?
DUSTIN: For years, I keep tweaking Synthicides original system, but get diverted to other projects. My goal is to make the ARC system a genre flexible tactical combat engine, filling a similar purpose to Savage Worlds. But if you’re like me, Savage Worlds isn’t quite your cup of tea, so I think there’s room to make a totally different game around the same general concept.

EGG: The last time we talked, you were crowdfunding Death Divers: A Heroic Dark Setting. What’s the reaction to that project been like?
DUSTIN: Reception has been positive! The printed books are shipping soon, so I expect the conversation to pick up again when those go out. A specific type of RPG player keeps finding Heroic Dark and providing great feedback. They’re people who loved traditional style DnD campaign where a rag tag crew of heroes are trying to save the world from ruin, but didn’t like DnD’s system and lack of narrative structure. Heroic Dark is more genre flexible, so you can easily play present day or sci-fi with minimal changes. Also, while the game leans more traditional in play goals, there are narrative tools and a meta system that helps the GM adjudicate an open ended campaign where heroes have to sacrifice everything or risk letting the bad guys win. 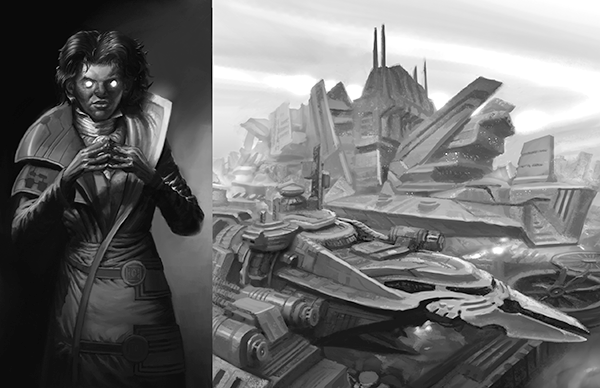 EGG: Beyond this new version of Synthicide, what else are you working on?
DUSTIN: Like I mentioned earlier, I want to adapt the ARC system into a stand alone genre flexible tactical combat game. But that project is tough! I’m trying to be as flexible and dynamic as Savage Worlds, but have more satisfying combat interactions and have fun gear chasing like you might get in games like DnD or Shadowrun.

EGG: Thanks for taking the time to talk with me. Where can fans learn more about your work?
DUSTIN: Download one of my free games on DriveThruRPG and subscribe to me as a publisher! That’s where I make all my announcements about new projects.

Synthicide: Sharpers in the Dark from Will Power Games
Egg Embry participates in the OneBookShelf Affiliate Program and is an Amazon Associate. These programs provide advertising fees by linking to DriveThruRPG and Amazon.