Talislanta: Fantasy Role-Playing Without All Those Elves

Talislanta is a fantasy role-playing game created by Stephen Sechi. Talislanta: The Savage Land is a recent kickstarter that takes place right after the disaster that in the original rules took place centuries in the past. Stewart Wieck was the sponsor and publisher of this newest version. The game will be full color and available in five games systems: the original rules, D&D 5E, Pathfinder, Savage Worlds, and Open D6. Mr. Wieck worked hard to bring visionary RPGs to gamers everywhere and he will be missed. I am sorry for his family’s loss. 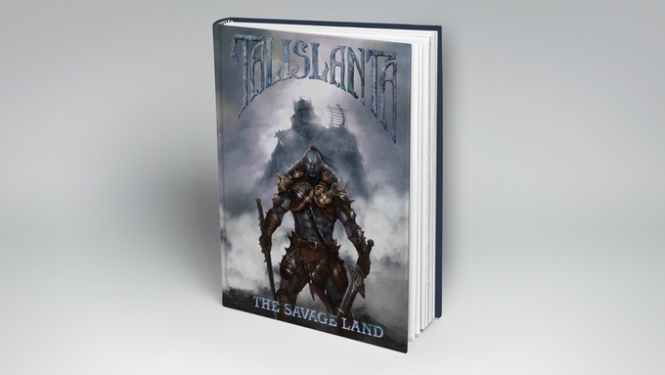 Free PDFs of everything published for previous editions can be found at talislanta.com. This review covers The Talislanta Handbook & Campaign Guide Second Edition, a 152 page rule and setting book. Set in a unique world shaped by a magical cataclysm, Talislanta is filled with a large variety of people, cultures, and customs. Players choose from over one hundred professions. Illustrations for each are included. Characters include merchants, nobles, scouts, shamans, and many more. Races include multi-hued humans as well as bird, plant, and reptilian races. Dozens of cultures include the likes of the artic Mirin and the desert dwelling Dracartans.

The rules are driven by a simple action table rolled against using a d20 plus skill. Mishaps, partial successes, and crits are all possible. The skill list covers combat, magic, performance, scholarly pursuits, thieving talents, trades and crafts, and wilds skills.

Magic is skill based. Casters can cast from a written source but it takes longer, or cast from memory a limited number of spells in a shorter time. Many lost spells can found in old ruins and dusty libraries.

Several kingdoms cover a continent and are built on the remnants of an ancient magical empire that destroyed itself centuries before. Many cultures can be traced back to this empire. The land itself was warped and reshaped by the empire’s fall.

A sophisticated urban game of diplomacy and trade could be set in the Seven Kingdoms and include a colorfully tattooed Thrall warrior, a dual-brain using Sindaran collector, and an avian Ardua river warrior. Another campaign could focus on smuggling and freeing slaves with a Farad wizard, a Mandalan mystic warrior, and a reptilian Araq warrior who struggles to keep his blood lust in check. More details on the world and the kingdoms can be found in the Talislanta Worldbook.

The corebook does not include monsters (found in the Naturalist’s Guide to Talislanta) but has three pages of quick stats. Normal animals are not found in Talislanta so there are no horses, dogs, wolves, or bears. Instead, a variety of unique animals take the place of mundane animals and fantastic monsters like the equs mount and the winged batranc. The book also includes a sample adventure and thirty six adventure ideas.

Talislanta is unique, free, easy to learn, and has enough depth to support campaign play. I have run successful campaigns including realm building in the Seven Kingdoms and ruin raiding in frozen L’Haan. A whole world awaits exploration in Talislanta.

I'm proud to say I was part of the project to digitise Talislanta and scanned the book you're reviewing. It was really great by Stephen Sechi to allow the materials to be made available for free.

Agreed on Stephen allowing the amazing world of Talislanta to be opened up! I remember when my best friend splurged and picked up ALL the Talislanta 2e books at once. The huge stack of books we had to pass around the table was just amazing; every turned page had rivers of ideas flooding through our heads. We wandered Talislanta for a good number of years, for roughly 6 to 9 months at a time, for over 15 or so years. One thing that becomes apparent when playing Talislanta...one of its best strengths is such a HUGE list of character types to play combined with a simple enough system that they all work together. When a game can have a Greenman, a Whisp, a Muse, a Thrall Warrior, a disgraced Aamanian Warrior-Priest, and a Danuvian Swordswoman....and every single PC can "pull their own weight over the course of the session", well, you know the game is doing something very, very right!

Ok...now I have to pull out my Talislanta books.

PS: Thanks for the work there [MENTION=8014]dbm[/MENTION]! I did the same thing for Powers & Perils (Perilous Lands maps a few decades ago for Wout's site..."www.powersandperils.org"; I believe someone else has done higher-res scans since then...technology/bandwidth and all that ...definitely a labour of love!).

You know, Talislanta says no Elves, but I count several different kinds. Just, you know, not actually called "elves."

Anyway, Talislanta 4e is rad, and I was thrilled when I found I could download those wonderful books.
[MENTION=45197]pming[/MENTION] - Powers & Perils is still one of my favorites. It's fascinating.

Talislanta seemed to have something for nearly everyone and yet everything hung together in a coherent way. Still a great RPG decades after the first release.

dbm said:
I'm proud to say I was part of the project to digitise Talislanta and scanned the book you're reviewing. It was really great by Stephen Sechi to allow the materials to be made available for free.
Click to expand...


Thanks for your work!

Talislanta is still on my list of games to play one day. One thing I’ve found (in past editions anyway) is that there are few concessions to balance when it comes to the race/classes. But man, are they flavorful.

Thanks to everyone here for the kind words about Talislanta. Always great to hear from folks who played the game and enjoyed it. Best to all of you - Steve Sechi

I have had a love of Talislanta that started when third edition came out and Peter Adkison from WotC offered me and my business partner--we used to co-own a FLGS in Astoria, OR--free badges for our first OryCon if we would demo the game.

We were deep in a campaign in another game and by the time we had started to play, we had two week before we had to go to the con. My former business partner was a fantastic GM--though he did have some flaws in his ability to understand some system's mechanics. That was more than compensated by his ability to run a campaign--sometimes just off of a 3x5 business card. He had been studying the game a bit and had typed up some notes on his C64 and gave copies to us, the players. It is a strength of the system that he had no trouble picking up the mechanics. I have looked through all of the different editions and it is true enough for all of them.

The setting is a beautiful and large sandbox to play in. All he had to do was come up with the adventures and tht was where he excelled anyway. The players at the demo had a lot of fun and people came back at later cons asking for more. I believe he did Talislanta the next year or two and them moved to other games.

In his campaign we went from the Seven Kingdoms travelling across the continent to the Quan Empire and ending up with the liberation of Batre and the Batrean Concubine PC becoming the Queen of Batre. It was a wild ride.

I think you could have a lot of fun with any edition but I do like Fourth Edition and I look forward to getting my copy of The Savage Land when the KickStarter ships.

I have played a lot of different game systems from 1st ED AD&D to Symbaroum and Talislanta is my absolute favorite RPG of all time.

Steve Sechi said:
Thanks to everyone here for the kind words about Talislanta. Always great to hear from folks who played the game and enjoyed it. Best to all of you - Steve Sechi
Click to expand...


You created and continue to share an amazing world. And we appreciate your work and creativity.

SmokinDeist, sounds like you had a great campaign and experienced quite the journey across Talislanta.


I also love Elves but I could not eat a whole one.

The kickstarter link in the OP is wrong. It should point to: https://www.kickstarter.com/projects/1861515217/talislanta-the-savage-land?ref=discovery