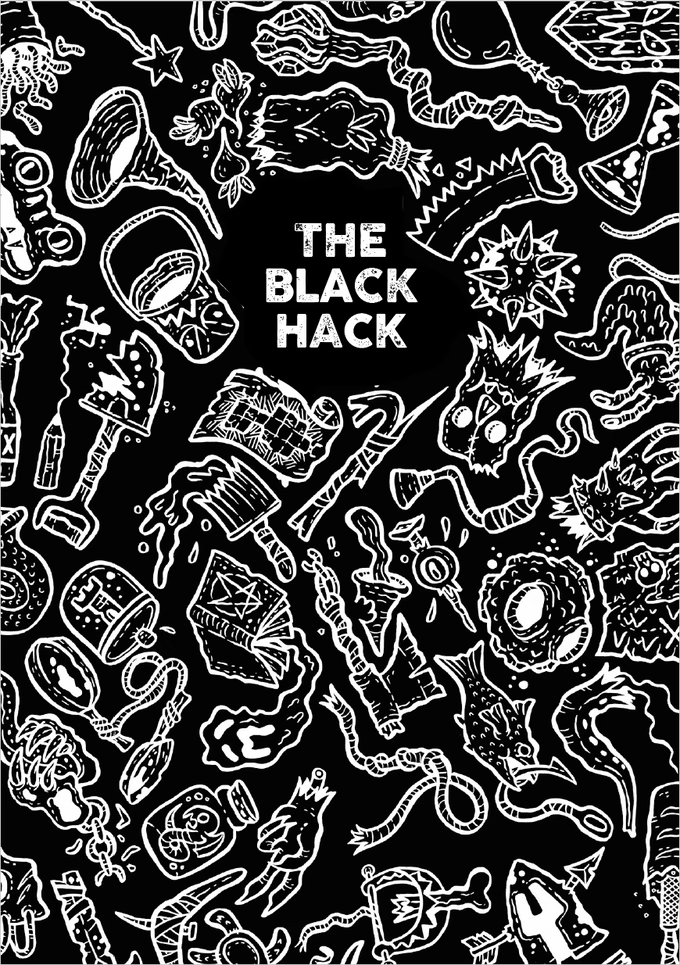 The lure of the boxed set is fairly clear. Everything you need to play the game all in one tidy package. This idea has evolved over the decades but I would be lying if I didn’t still enjoy cracking open a box and exploring everything inside. The Black Hack had a moment in the sun a couple years ago as a game that combined old school hexcrawling and modern game elements. Peter Regan, the designer of The Black Hack, sent me a review copy of the recently reprinted boxed set to review. I liked what I saw, even if it is missing one essential element to be a complete all in one experience.

The Black Hack is a primarily player-facing RPG. Characters are defined by their characteristics and roll under them for everything. Rather than attack rolls from the GM, players roll to avoid getting hit. The classes are simply designed along the typical ones you see in fantasy RPGs: fighter, thief, wizard, cleric.Only the spellcasters gain new abilities as they gain levels as they rack up new spells. The others have a main ability that gets more powerful. Both of these abilities fit with the standard idea behind the class but take an interesting perspective on those ideas. Thieves get advantage on anything involving burglary and they also have an opportunity to switch up their backgrounds for those unexpected hits out of their murky past. Fighters get extra damage dice equal to their level which they can use to focus on a big target or split in between several targets for a multiattack.

The game also seeks a middle ground with dungeon crawl resource management. Rather than worrying about spell slots or spell points, magic using characters pick a number of spells equal to their level. When they cast that spell, they make a save against the casting ability and if they make it, they retain the spell. Successive castings gain a penalty to retain, but it seems like an elegant way of keeping players from worrying about memorization priorities.

Usage dice are the other main tool in this toolkit. Some tables track things like ammunition and torches while others don’t. Usage dice fit in between these methods. When players use one of these resources, they roll the usage die. If it comes up as a 1 or 2, it changes into the next lowest die. If it happens on a d4, the resource is exhausted. These dice are also used during spell casting to determine how long a spell lasts. It adds a little bit of tension without requiring extra bookkeeping.

Leveling up also adds a narrative element to the usually dry experience of adding numbers to character sheet.The game called XP Experiences and players spend Experiences equal to their level to gain a new one. This is done during a scene where the leveling players tell stories about their exploits and background. The GM also rolls on a table to see what the outcome of their night of tall tales and pub crawling generates, whether it be some extra Charisma from a great audience reaction or a new debt from a night that got a bit out of control that sends the PCs back into danger. This process encourages characters to dig into their backgrounds as they play, rather than generate something up front that might go unused if the campaign only runs one or two sessions.

Each of these rules fits onto one or two pages at most. The rest of the main book is a treasure trove of generators for everything you might need in a fantasy campaign. Town layouts, dungeon maps, monster builder NPC charts: all of this stuff is great for The Black Hack, which has a very DIY aesthetic in its art and presentation, but it’s also useful for any fantasy game of this type.

The boxed set goes a little farther. The main rules available on PDF have the generation methods, while the boxed set includes more pre-made materials to let GMs crack open the box, flip through a few things and head out into the unknown.That includes a starting town, booklets of spells, blank books to jot down notes, a second copy of the rules side of the main book and a small bestiary of versions of the most common monsters you might encounter in a game like this. The PDf has everything someone needs for The Black Hack experience, but the presentation of the boxed set is so clean, upgrading seems worth it.

The one thing the boxed set is missing to be truly all in one is dice. Supply chain issues and manufacturing costs are the culprit here, and these days you can find D&D dice at the local dollar store, but an included set is the one thing keeping this boxed set from being an all time classic to merely very, very very good.

The Black Hack Second Edition boxed set is perfect for players who want to get into running games, GMs who want to roll their world as they go, or as a gift given to budding fantasy RPG players who want everything they need in one handsome little box.
Click to expand...

I'll get the PDF. At that price it comes up to $70 canadian. There is not enough in the box to justify the price.

Not a fan that I have to buy the physical product in one location and then the pdf in another. :/ Also since the price was in pounds I'll assume it's shipping from the UK? Which adds another issue due to shipping issuses currently. Ah well.

Brilliant, I missed the Kickstarter for this print run and have been waiting for direct orders to open!

I was a KS backer for the second edition boxed set.

The offering in this one is different, making it a boxed set V2.

For the KS, at £75 (including shipping) i got PDFs, dice and additinal copies of the rules.
This one would cost me a fraction of the price including shipping (£42) and it would get me more content. It is a great game and deserves exposure. But in my opinion the retail buyers are getting a much better deal.

This new version of the boxed set includes: