This is your one-stop ticket to humanity discovering the stars using the latest edition of the Traveller RPG. 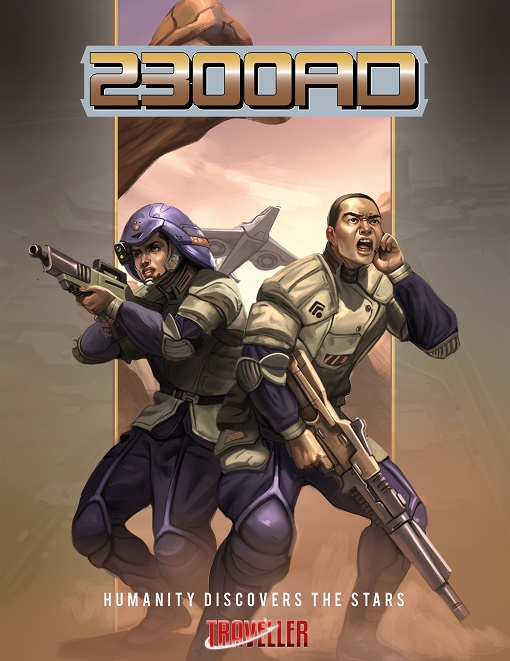 Three hundred years from now, humanity is claiming worlds far from Earth. Despite nearly destroying itself in the Twilight War, despite all the wars since, humanity has held on and kept its dream alive. 2300AD is the story of that dream, as humanity reaches for the stars.

This is a richly-developed hard science fiction universe, with ships spinning against the night as they are propelled by the stutterwarp drive, a true violation of physics as we know now it. Airships, helicopters and hovercraft are common sights on worlds of the frontier, while spaceplanes and rockets carry explorers and traders to orbit, and from there starships take them across the gulf of space to the colonies.

Campaigns in 2300AD range from interstellar exploration and war on the far frontier, building new colonies on hostile worlds, discovering and understanding alien species, and engaging in espionage and crime in the gritty mega-cities of the Core worlds.

Book 1 Characters & Equipment: Everything you need to create explorers, company agents, military personnel, merchants and other inhabitants of 2300AD. This book also contains a comprehensive equipment guide, personal augmentations, and a selection of robots and drones commonly used in space and on colony worlds.

Book 2 The Worlds of 2300AD: An exploration of the universe of 2300AD, from the Core worlds to the furthest colonies. You will learn about the aliens and animals that inhabit them, how humanity has adapted to living on their surfaces, and the most hostile of environmental threats to be found beyond the Earth.

Book 3 Vehicles & Spacecraft: A full guide to operating and fighting in spacecraft and vehicles, from humble dirt bikes to powerful spacegoing frigates. There is also a glimpse at the alien spacecraft that have been encountered thus far by humanity.

Starchart of Known Space: A massive poster map depicting every star system known to humanity and the routes starships take to each.

A hundred dollars is a bit steep for a boxed set that requires an additional core rulebook to even play. And that's putting aside the issue of a $50 PDF without a preview (either on the Mongoose webstore or on Drivethru).

Edit: I stand corrected, there is a small preview on the Mongoose site at least.

(Traveller 2300AD) Ships of the Frontier