D&D 5E The Sherwood Forest Scenerio - How would you do it?

Thanks to the power of the internet, I'm rewatching a favorite: Robin of Sherwood.

So in inspiration of this, I'm asking the following:

How would you do a band of merry men in 5e (assuming the PCs are said merry men)?

What party would you build?

what obstacles would you have to deal with?

What would be in the woods to help/hinder the party?

What magic would be expected to be used to turn Sherwood forest into a fortress?

How would gameplay change when you switch tiers? 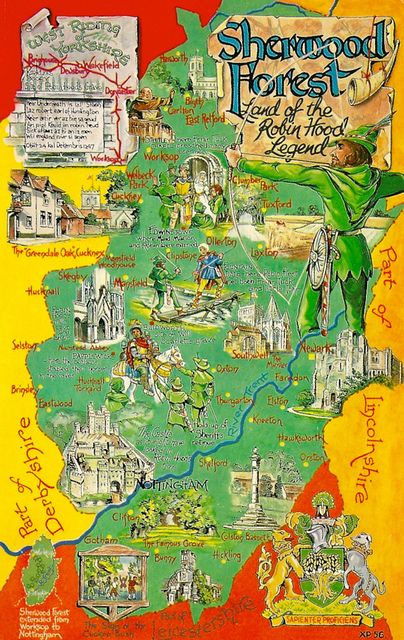 But that's just me
Upvote 0 Downvote

Fighters and rogues... none use magic. MAYBE it would be better to use the middle earth book. Then you have 5+ non magic classes.

There is a non magic bard and non magic ranger, I almost want to multi class them for Robin

or we COULD reimagine with magic but giving Frier Tuck Sacred flame feels wrong... so I might make him a druid for goodberry (more goodberry wine) and shelighly for his quater staff
Upvote 0 Downvote

I'm okay with a higher magic robin of sherwood.

Argueably, my most favorite version is where Robin of Locksley was a warlock dedicated to Hernes the hunter and fought Satan's minions as much as the Sherrif of Nottingham.

In Ivanhoe, Robin and Marion were shapeshifters.

Shades of Eternity said:
Thanks to the power of the internet, I'm rewatching a favorite: Robin of Sherwood.

So in inspiration of this, I'm asking the following:

How would you do a band of merry men in 5e (assuming the PCs are said merry men)?

It depends on how high a magic level you’re willing to indulge for accuracy to the setting concept vs adapting it to DnD, rogues and rangers i think are obvious, monks(drunken master, kensei, shadows) and bards(eloquence, lore, swords) possibly some clerics(trickery, twilight, nature) or a warlock or two of the right pact(archfey, genie), a druid or fighter fit in well enough.
Edit:the focus imo is on stealthy mobile types, being tricky and smart rather than the big tanky fighter dude in noisy heavy armour, short/longbows are the iconic weapon but shortswords/knives and staffs also fit the aesthetic, maybe some handaxes, spears, throwing hammers or clubs, think about what you can reflavour to match available tools

Shades of Eternity said:
what obstacles would you have to deal with?
Click to expand...

I’m a little unclear who/what this is meant to be directed at specifically? Assuming you mean the players, resource management, keeping up ammo, potions and rations/fresh food and water(ban goodberry, tiny hut and the like) while trying to not get discovered by the sheriff and royal guards out for the wanted criminals, keeping themselves informed of opportunities to liberate gold for the needy or of upcoming raids by the guards meaning they need to relocate home base in the forest(itself a challenge to present them with how to do this)

Shades of Eternity said:
What would be in the woods to help/hinder the party?
Click to expand...

Shades of Eternity said:
What magic would be expected to be used to turn Sherwood forest into a fortress?
Click to expand...

As mentioned above, illusions and speak with plants/animals, commune with nature, enchantments to confuse and misdirect, control plants, plant growth, (permanent?) wall of earth/stone and stoneshape to build fortifications, awakening on the animals.

Shades of Eternity said:
How would gameplay change when you switch tiers?
Click to expand...

GMforPowergamers said:
or we COULD reimagine with magic but giving Frier Tuck Sacred flame feels wrong... so I might make him a druid for goodberry (more goodberry wine) and shelighly for his quater staff
Click to expand...

For me Tuck is a Monk, Open Hand
Upvote 0 Downvote

Staff member
The issue isn't classes, it's the aesthetic. RoS certainly had magic in it. But it wasn't fireballs and stuff.
Upvote 0 Downvote

Back when Prince of Thieves came out (back in 2E), we planned to do a Robin Hood game in my homebrew.

Robin was an elf ranger.
Will Scarlett was a gnome bard.
Maid Marian was a human paladin.
Friar Tuck was a (half-orc) cleric.
<Edit > Forgot Little Jon as a burly rogue.
Asseem was a dwarf monk.

The low-level adventures (1-5) were against Sir Guy (a half-orc fighter) and his goons (goblins). Around level 5, the character's antics would have drawn the attention of the Sheriff of Nottingham (a blackguard), his witch (would use a sorcerer nowadays) who employed bugbear mercenaries, adding in enemies who were increasingly a martial/spellcaster mix.

Upon defeating the Sheriff around 10th level, the group discovers that a powerful cabal/cult is behind things. Enemies are more clerical in nature and call upon demons for assistance against the PCs. By this time, the party should an established base they need to defend and wish to expand to overthrow the cult of power.

At around 15th, the party faces the leaders of the cabal/cult and while defeated, the party discovers that the cult has possessed the king with a powerful demon. Not only that, the king has allied itself with a dragon and the group find themselves leading an open revolt (and an army) to march against the king and draconic force. At the final, the party learns that before the king was possessed, the dragon ally had used a ritual to lend part of its heart (ala dragonheart) to ensure the king's health and well-being. Stopping the hell-bent king means destroying the dragon first, before tackling the possessed king.

I'd start them off all as mundane folk: Fighters, Rangers, Rogues and monks. Any character with reasonable charisma and Perform can act as a bard. As they level, you can crank the magic up. Arcane tricksters, Eldritch knights and Rangers start getting spells.

At low levels, you are dealing with animals, survival and caravan guards. You are also dealing with having to disguise yourself to sell and buy goods in town and gather information. So, I like to think there'd be lots of opportunities to make contacts, make enemies, sneak into people's houses and find information and, generally, try not to get noticed/recognized by the local authorities.

At Higher levels, you start making a name for yourself so guards get tougher, they start hiring magicians, mercenaries start looking for you. They start messing with your loved ones in the towns and you need to rescue people, help the poor, break people out of prison etc...

As far as the forest goes. Mostly, it's just rumours of being haunted or enchanted. Really it was mostly bandits that kept people out and used the myths of the forest to keep people away BUT...when you go deep enough, things get weird.

Look at the spell Guards & Wards and apply its effects to the deepest reaches of the forest.

Maybe, at higher levels, there's a need to seek something out in the centre of the forest....
Upvote 0 Downvote

Don't forget the Dad Perk for Little John (seriously, he's pretty much Robin's dad for getting him out of trouble).
Upvote 0 Downvote

D&D 5E What creatures would you use for this...

D&D 5E How would you enhance monster entries?
2