Last year, Tales From The Loop -- "roleplaying in the 80s that never was" -- burst onto the scene, brought to us by Swedish publisher Fria Ligan, and based on the sci-fi art of Simon Stålenhag. This year, a sequel is coming: Things From The Flood! 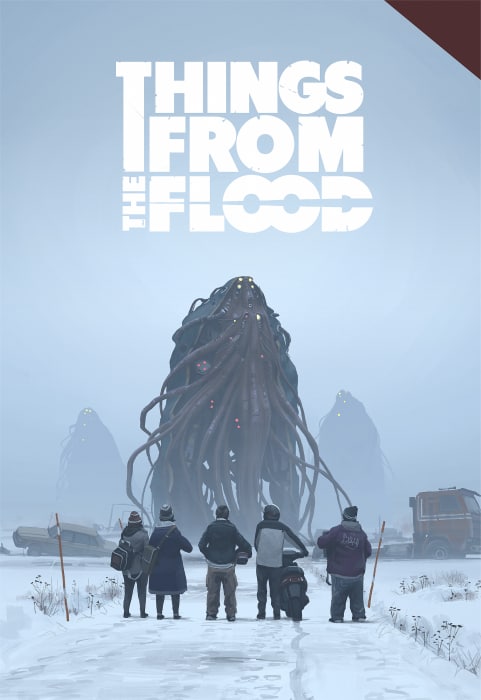 Things From The Flood is another of Stålenhag art books, and will be a new standalone expansion to Tales. It's coming to Kickstarter next week, on September 18th.

"Things from the Flood is based on the art book with the same name and thrusts the Talesuniverse into a grim and bleak alternate 1990s. In this major expansion, fully playable as a complete game, you step into the shoes of teenagers growing up in the midst of a decade of change – and disaster.

Designed by Free League Publishing - the same team that made the Tales from the LoopRPG (winner of five Gold ENnies 2017, winner of three Golden Geek awards 2018), Things from the Flood presents a darker, more mature version of Stålenhag’s hallmark retro sci-fi. Create new Teens or let your Kids from Tales from the Loop grow older. But remember - this time they can die."

This one is a little darker than Tales From The Loop. In the previous game, your characters could not die; this one has a more mature tone. It's a standalone game, but fully compatible with TFTL, and you can advance your characters (and their age) to move them into the sequel.

Tales was gorgeous; I'm sure this one will be equally so. In fact, Tales swept up multiple ENnies last year, including those for art and writing.

I just checked, and it seems that as a backer of the 'Tales' quickstarter I'll get a pdf copy of 'Things From the Flood', as well. It was the last stretch goal to be unlocked in the previous kickstarter. That would be really cool.

Now having it as a hard copy would be even better, of course...
T

I'd forgotten about that final stretch goal. I'll probably still back the new KS to get a physical book.

Awesome. Missed the previous Kickstarter for 'Loop'. I still hope to pick up the book and look set to back this one.

I have Mutant: Year Zero and Coriolis versions of these games. They are a lot of fun. I love the core mechanic. The hit points and mind points version in Coriolis is better than the actual attributes going down in M:YZ in my opinion.