There have been many versions of Traveller over the last four decades. Traveller5 is the current version from original creator Marc Miller, and this reprint includes errata and other upgrades, as well as a new format consisting of three hardcover books. It's already funded, with a month to go. 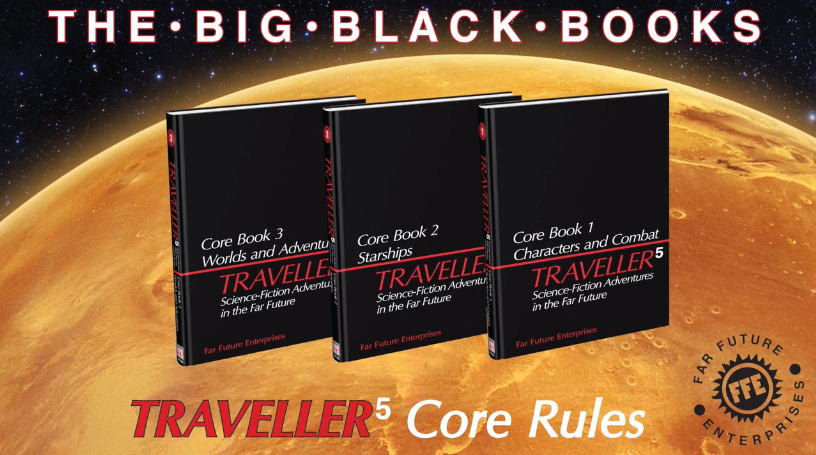 Traveller launched in 1977, and is the quintessential, original space RPG. Over the years, versions have included Traveller, MegaTraveller, a GURPS version, a d20 version, a (currently still supported) version from Mongoose Publishing, and several more. In fact, a review of Traveller, back in 1980 in Ares Magazine, said "This game starts off where Dungeons & Dragons left off, but, if there is any justice, will end up being more popular than that venerable relic. For one thing, the Traveller rules are fairly consistent (moreso than is usual for such games). For another, unlike the first generation of role-playing games, this one requires no referee or gamesmaster. Somewhat complex. Variable playing time." A little harsh on D&D at the time, and somewhat inccurate - Traveller does, indeed, have a GM - but Traveller has had some very popular booms.

This reprint of the 5th Edition of Traveller includes three hardcover books: Characters and Combat, Starships, and Worlds and Adventures. Each is in the region of 300 pages, and they come in a slip case. Yours for $100! Or $30 as PDFs.

You can find it here on Kickstarter.
Click to expand...

Traveller doesn't need a GM? How does that work?

That old print edition Ares magazine called that one wrong it seems along with its own magazine being relevant and staying in business...current Ares magazine and website aren’t the same company from back then.


I don't think that review gets many accuracy points. I mainly included it as a curiosity.


Hey! You stole my dying during character creation joke!


As recompense, we'll let you have one (1) "characters all die or go insane" joke on the next Call of Cthulhu article, or two (2) "virgins in Mom's basement" jokes on any given RPG article. Please use responsibly.

Damn, about time! I've checked their website periodically the last few years looking for this, only to find no books, but... CD-ROM? Um, pass. Long overdue reprint.

There is also the "USB Flash Drive Option" which Marc W Miller has done for a while; the FFE website is not always updated, it is best to email him, he usually answers pretty quickly.

Original Traveller has always been playable as a solitaire game. It's character, starship and system creation are dice driven and can be combined to form adventures one doesn't need a referee to run. It just tends to be more fun and creative with a group.

I've never played Traveller. I take it this would be the ideal way to start my Travelling adventures?

I love how D&D is being referred to as a "venerable relic" in 1980, right as the game was about to hit it first big boom. A boom big enough to change the culture. And reading this while enjoyed its second, even bigger boom makes it all that more ironic.

Stacie GmrGrl said:
I've never played Traveller. I take it this would be the ideal way to start my Travelling adventures?
Click to expand...


I would download the free starter rules from DTRPG:

All other versions use the core concepts from this, if you decide to go that way.

I'd like to get this, but $100 is too steep for me. Besides, I've already got the Mongoose edition, but no one to play with.

Stacie GmrGrl said:
I've never played Traveller. I take it this would be the ideal way to start my Travelling adventures?
Click to expand...

I don't own any of the previous Traveller 5 stuff, and have never read any, but from what I hear (its an over complex, over wordy version of the rules with numerous unwieldy sub-systems) I'd say HELL NO it would be an appalling place to start.

I'd recommend either the quick start recommended above, or Cepheus Engine (an OGL clone of 1e Mongoose Traveller), or Mongoose 2e Traveller - a quick DTRPG search will find both/either and probably some other optiosn as well.

crazy_cat said:
I don't own any of the previous Traveller 5 stuff, and have never read any, but from what I hear (its an over complex, over wordy version of the rules with numerous unwieldy sub-systems) I'd say HELL NO it would be an appalling place to start.

I'd recommend either the quick start recommended above, or Cepheus Engine (an OGL clone of 1e Mongoose Traveller), or Mongoose 2e Traveller - a quick DTRPG search will find both/either and probably some other optiosn as well.


Sadly, I have to concur. The Cepheus or Mongoose editions are very newbie-friendly compared to other editions.

If you did the previous T-5 Kickstarter a few years ago (and I did) you'll get the new / updated PDF free. I gather from the e-mail they sent me anyway. It does include new material (based on the e-mail from Marc Miller), namely a new "great personal combat system" and "an even better role-playing space combat system". Additional examples, cleaned up with an index as well as other material. The main attraction (for me) is it being broken into 3 hard back books. The original one book at 650 or so pages was kind of a pain. The last updated PDF was 700 or so pages and these three will total about 800. The last I checked T-5 is compatible with Mongoose Traveller although I'm not sure about this updated version and Mongoose Traveller version 2. Some people find the size of T-5 to be an issue. The lack of indexes certainly was. That's been rectified since then. Breaking it up into 3 books will certainly help as well as it being a call back to the original little black books. I'll probably do this KS as well (at the $100 level) to get the hardbacks, but we'll see if the budget allows for it

*edit* For punctuation, clarification and what not.

I still have an unopened MegaTraveller boxed set on my shelf! I don't need no newfangled Traveller 5!

The index is certainly welcome. But breaking it up into three volumes does little to really address the absolutely unwieldy and unnecessary mess that T5 is. If anybody is eyeing this I would recommend playing playing classic Traveller, some version of Cepheus stuff or playing the current Mongoose edition.

I've never properly gotten a feel for what this deluxe 5th edition offers that isn't covered at a cheaper price point in the Mongoose version...details on how the two editions are different would be welcome. I was under the impression that T5 was more of a "toolkit" to design your own SF game than Mongoose was, but not sure how it goes about doing that. A key feature of Traveller over the years (ime) has been its accessibility and ability to run complex SF with simple systems (well, with maybe the exception of MegaTraveller and TNE which leaned more complex); CT, T4 and MGT1 and 2 have all been at the right "complexity level." Does T5 allow for that, or does it lean more toward MT and TNE?