Hello my delightful darlings, it’s time for a new PAIZO NEWS ROUNDUP! This edition we leave the Golem behind and check out a few majorly impressive products from third-party publishers – specifically, Drop Dead Studios. You may know them as the fine folks behind the Spheres of Power and Spheres of Might alternate rules systems. Well, recently they’ve released a new, massive tome compiling most of everything they’ve ever printed into one convenient volume: say hello to Ultimate Spheres of Power! 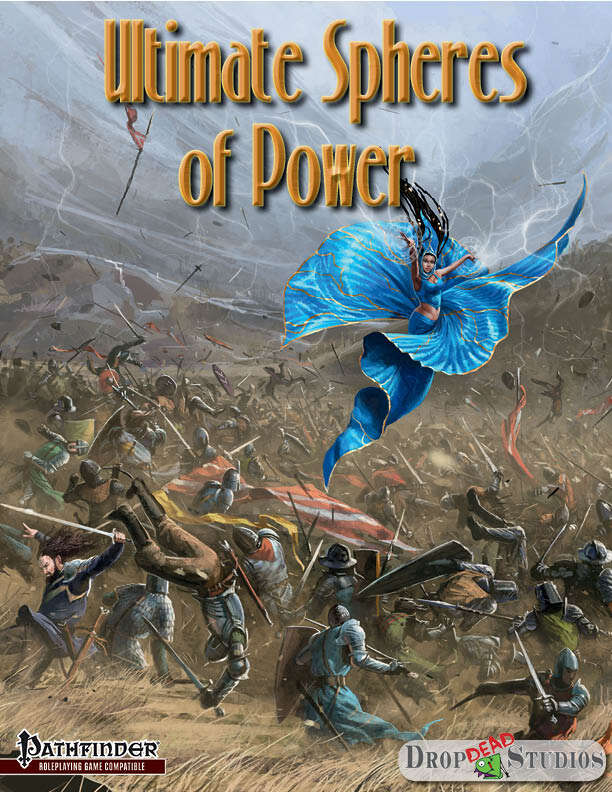 Let’s start out with Ultimate Spheres of Power. Clocking in at a hefty 633 pages, it’s larger than the core rulebook for the system it supplements – heck, it’s larger than the Pathfinder 2E Core Rulebook! That’s kinda to be expected, what with it being a compilation of everything ever printed for a specific system (think about how staggering it would be to see everything Paizo ever printed for a system compiled into a single “book”), but it can still be a little intimidating if you don’t know what you’re getting into.

One of the biggest casualties of this effect is pacing, or layout. For example, after having read through the book, my instinct is that the chapter on spheres should have been placed as early as possible in the book. After all, Ultimate Spheres of Power is all about an alternate magic system, so it makes sense that it would be the first thing to read. While having classes before spells follows the format that Paizo laid out, I think I’d find it easier to understand the classes if I had the context of the actual magic system they referenced.

Don’t let my qualms about things like layout distract from the main point, however. Ultimate Spheres of Power is an excellent resource for players and GMs looking to mix up the magic in their campaigns. Even if you don’t use the rules for building your own traditions or even the classes themselves, there’s plenty here to snag to give your BBEG dragon a curveball when your players walk into the fight too cocksure.

One of the benefits of compiling all the rules for Spheres of power is that it gives GMs plenty of toys to play with. Not only does the World Building chapter include a step-by-step example of how to use to the Sphere rules to make, say, a magic system where martial arts is used to telekinetically control the four elements, but there’s also a solid bestiary of creatures that use these new rules and templates to make ‘em hit harder. After all, if your players are going to be cheesing it up with teleporting to another solar system, you need to be able to keep up!

Speaking of other worlds, one of the things I really appreciated that may not have been possible without the compendium book is the collection of alternate worlds and settings for you to play in. There are examples of low-magic worlds, high-magic worlds, a new plane, new organizations – all the juiciest hooks you could need to leave Golarion behind. Give it a shot!
Click to expand...

Please be more clear about your editions. The Tag is PF2E. You compare page counts to a PF2E core book, but this product is for 1st edition. Looks like a good product though for 1st ed fans

Rhianni32 said:
Please be more clear about your editions. The Tag is PF2E. You compare page counts to a PF2E core book, but this product is for 1st edition. Looks like a good product though for 1st ed fans
Click to expand...

Oops, that's my fault, I tagged it incorrectly. Thanks for pointing that out, I updated the tag!

I backed this on Kickstarter. It's a pretty awesome system. One of my players uses SoP in my Emerald Spire game.

There are only two drawbacks: they kept making supplements that aren't in the "Ultimate" compilation and it desperately needs a proper index. Finding an ability is like searching for the old proverbial needle in the haystack.

Great system. I'd recommend using SoP with Spheres of Might in an all-spheres campaign. It would make for a very different experience from games with standard classes.