Ex-TSR designer Jeff Grubb wrote a Known World of Mystara sourcebook for AD&D 2E that was sadly never published. But now WotC has given permission for it's release to Shawn Stanley of the Vaults of Pandius website, the Official Mystara Homepage!


"A long time ago I wrote a project for TSR converting the Known World of Mystara from D&D to AD&D 2nd Edition. Through a tale of woe and intrigue, (link below) that product was never completed, and instead became Karameikos, Kingdom of Adventure.

However, I kept a copy of the unfinished manuscript (well, print-out), and a short while ago, gave it to Shawn Stanley, who runs the Pandius Website. He in turn has cleaned it up a bit, and plans to release it, free, with WotC's blessing, to fans on the website's anniversary.

It is really nice to see this surface after so many years - it is a "Lost Tome" of D&D history, and I hope fans of the setting enjoy it."

He speaks more about the story, and why he left TSR, on his blog.

Mystara is a D&D campaign setting first published in the early 1980s, and was the 'default' setting for D&D for a long time.

Why I left TSR

A couple years back I talked about Stormfront , the TSR world that I never ended up creating. And in the initial entry I said: " Stormfro...

Jeff Grubb gives an overview of the book on his blog

As for the release date: Shawn Stanley, Webmaster of the Vaults of Pandius, announced (here) that June 27th is the planned release date.

Some people were wondering if Jeff is involved in the release.

I reached out to Shawn Stanley on April 10th:
"Yes I was going to reach out to him with respect to providing some sort of foreword for the release. I had been intending to do so once I had finished the graphic design - but with the release of new news yesterday, I reached out to him yesterday. I also wanted to get his okay for the editing that I had done. But yes, I would think that anything that Jeff wants to write to accompany the document would be a great idea. I do kind of agree that something a little bit less-depressing than the blog posts might be preferable - something to celebrate the release than recall the negative things that had happened during that time."
"I do hope that he will agree."

Jeff also responded to me on April 10th:
"Shawn has been in touch with me, and I will be glad to write a brief foreword for the project."

Which will be a fulfillment of Jeff's offer back in 2019:
"If you succeed [with the petition], I will be glad to provide an intro with a less-depressing history of the project."

Note Vaults of Pandius is the Official Mystara Homepage! Given that designation by WotC, back in the 2000s, when Jim Butler was managing fan policy for "other worlds." There's an official agreement and everything. That's why the site is the natural host for this.

UPDATE:
WotC's approval of this sourcebook's release have been premature, i.e. it isn't greenlit.

That sounds like a big nail in the coffin of getting Mystara released as an official 5E setting. If WotC were going to do an update, why would they let that out anywhere other than on DMs Guild?

Never say never. If this proves popular WotC may pick it up. For as far as I know it's 2e.

Oh, and don't look on social media for confirmation from Jeff. There is another Jeff Grubb on Twitter that is some video game guy. And nothing on his blog yet: GRUBB STREET

darjr said:
Never say never. If this proves popular WotC may pick it up.
Click to expand...

How would they measure its popularity, though?

That is fantastic news.

Davies said:
How would they measure its popularity, though?
Click to expand...

Ask the owner of the website how many downloads it gets, what their web traffic is like surrounding the news, release, etc.

overgeeked said:
Ask the owner of the website how many downloads it gets, what their web traffic is like surrounding the news, release, etc.
Click to expand...

I think WotC wouldn't be that dumb. Nor Pandius that much of a villian.

I wonder how Mr. Welch will react.

darjr said:
Jeff Grubb wrote a 2nd edition Mystara source book that was sadly never published! But now WotC has given permission for it's release!!!! From the article: 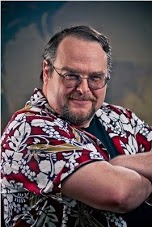 Edit: It has since been made clear that this announcement was a bit premature. The Vaults of Pandius are still awaiting the green light from...

I'd only heard about this recently, I think there were some people who did a petition to have it released, definitely going to check this out.

Nice I'll check it out.

Oh this should be good even if its only 2e I'd consider picking that up!

Do we have a firm date as to when it will be released?

hopeless said:
Oh this should be good even if its only 2e I'd consider picking that up!
Click to expand...

I think it is just being released on the Pandius website from what I gather. So no "picking that up" as I would normally think of that phrase. Maybe "check it out."

Azzy said:
Do we have a firm date as to when it will be released?
Click to expand...

The goal was the 25th anniversary of the Pandius website (whenever that is), but that just seemed like a goal, not a firm date.

PS, for those interested, here is what Jeff Grub had to say about the state he left the Mystara Sourcebook in: Mystara Redux

Also, the group / person releasing it is cleaning it up a bit. It doesn't seem like they have contacted Jeff about this, but who knows.

EDIT: fixed the link - thank you to @jeffh for catching the error

If you hear a faint sound emanating from far away, don't waste time trying to figure out what it is: that's my squeal of delight, echoing through the air.
Last edited: Apr 11, 2021

I am a huge fan of Jeff grubb. I love his ad&d work. I would love for this to be true. And boy do I wish he would create new material for d&d again

dave2008 said:
The goal was the 25th anniversary of the Pandius website (whenever that is), but that just seemed like a goal, not a firm date.
Click to expand...

According to the original announcement thread over at The Piazza, that's June 27th, and it sounds like it's still the date it's expected to be released.

overgeeked said:
I wonder how Mr. Welch will react.
Click to expand...

Hopefully optimistic. Mystara has always gotten the short end of the stick, with it being purged in TSR when Williams got rid of the Gygax loyalists. When they stopped the line it was second only behind the Realms in terms of gamebooks, think that still holds true today. The setting sold very well when it was in print, especially in Asia and Europe due to BECMI being translated into so many languages. The fact it borrows from so many cultures also helps it because people liked when their cultures were included. Most younger people know the game from the Capcom video games, which weren't that long ago. The setting is ready for a come back, assuming it gets the same promotion level as other settings do.