Sasquatch Game Studios - made up of WotC alumni Dave Noonan, Richard Baker, and Stephen Schubert - is the company which produced Princes of the Apocalypse for WotC. Now they're turning their eyes towards a 288-page full-colour hardcover setting. This will be a D&D 5th Edition version of their Howard/Lovecraft inspired Primeval Thule campaign setting which already exists for Pathfinder, 13th Age, and D&D 4E.

UPDATE: The Kickstarter is live!

Primeval Thule is described as a "savage, intense campaign setting". With influences from the likes of Conan and Cthulhu, it's an "dangerous place full of barbaric wilderness, decadent city-states, horrific monsters, and eldritch mysteries". If you're a fan of pulp fantasy and horror, Conan the Barbarian, Kull of Atlantis, Hyperborea, Tarzan, and Lovecraft's alien gods, you should enjoy this. Add in a healthy dose of Burroughs' Pellucidar and the Land That Time Forgot, plus the art styles of Frank Frazetta and the likes, and you'll get the idea.

Sasquatch will be producing a 288-page hardcover book in full colour, with a continental poster map. It will contain more than 40 new monsters, plus the range of spells, magic items, and all the other stuff you'd expect to see in a campaign setting. It'll be the first fully-fledged campaign setting for D&D 5E.

They're doing this via a Kickstarter next week. The exact launch date is not decided yet, but it's only a few days away. As Dave Noonan says, "We're going to fulfill this fast! Because this is a new version of a book we've already published, most of the text and all of the art is already done. We'll send files to the printing press as soon as the Kickstarter campaign closes and we know how many books we need." Like others dipping into 5E publishing, the Open Gaming License will be used.

The existing versions of the setting contain a new character race (the Atlanteans), 19 "heroic narratives", over 40 monsters, 3 adventures, a city called Quodeth, City of Thieves, and a continent of "savage adventure".

Below is an image of the Pathfinder version of Primeval Thule. I don't know if the 5E version will look the same, but the 13th Age and 4E version do, so it's a safe bet. 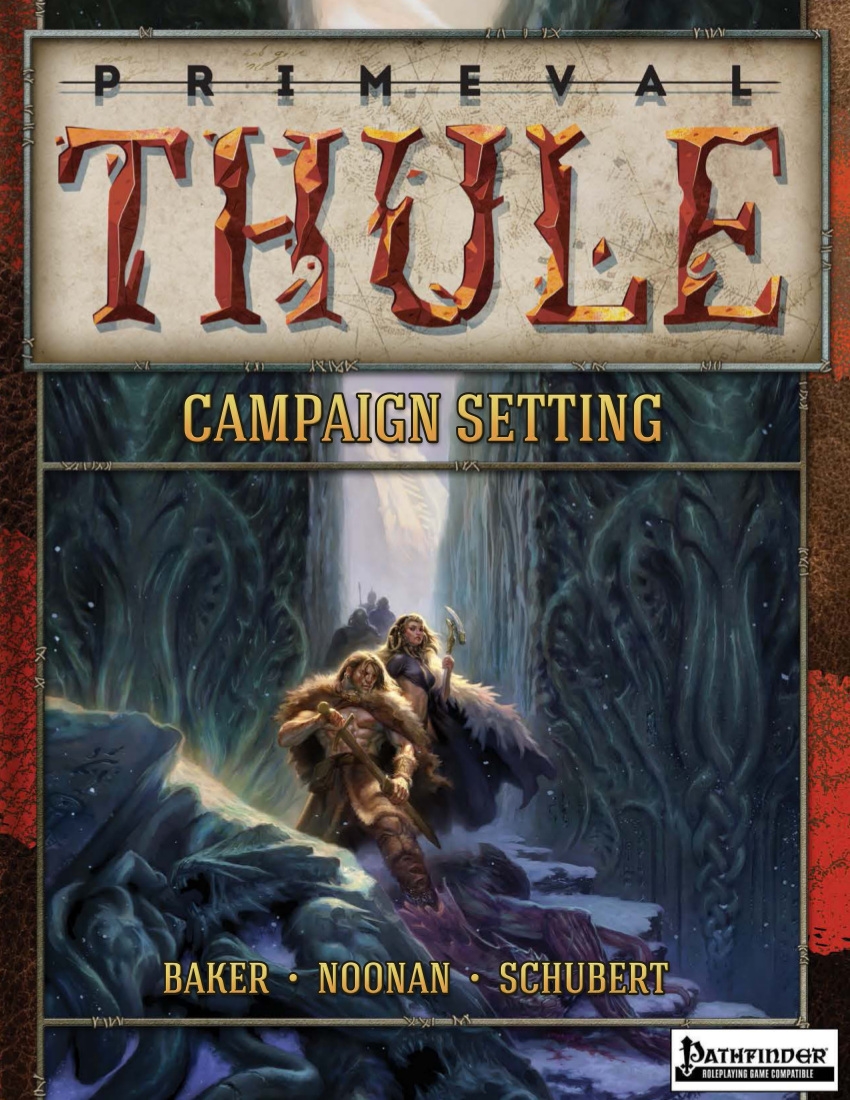 ​
"Welcome to Thule, a primordial land of fierce barbarians, elder horrors, and savage wilderness. In this ancient age, humankind is a young race, newly arisen on a monster-haunted Earth. Cities of cruel splendor lie scattered across the great lands of the north like a handful of gems strewn from a dead thief's hand.

This is a doomed age, a time of great deeds and inhuman terror destined to be lost and forgotten beneath the numbing cloak of endless winter. But for one glittering moment, Thule lives—and it is a fierce, cruel, splendid, and marvelous moment indeed."

More information as I get it!

Morrus is the owner of EN World and EN Publishing, creator of the ENnies, creator of the What's OLD is NEW (WOIN), Simply6, and Awfully Cheerful Engine game systems, and co-host of the weekly Morrus' Unofficial Tabletop RPG Talk podcast. He has been a game publisher and RPG community administrator for over 20 years, and has been reporting on D&D news for two decades. He also is on a Twitter.
A

I didn't know about this. It looks awesome.

Shut up and take my $$! This looks amazing.

First time I think I'll jump into a kickstarter. This looks fantastic.

Has there been an 5e OGL and I missed the memo? I mean I hope one does come (Gen Con is right here) but I am wondering how they are able. Other than of course that they just did Elemental Evil so maybe they just got permission?

DQuartermane said:
Has there been an 5e OGL and I missed the memo? I mean I hope one does come (Gen Con is right here) but I am wondering how they are able. Other than of course that they just did Elemental Evil so maybe they just got permission?
Click to expand...

I am pretty sure they are keeping it within legal limits. More and more companies are doing so lately since there is no OGL for 5th edition. They usually only mention 5th edition in a "Compatible with D&D 5th Edition" blurb and the rest is generic (but easily compatible).

I do have this book for Pathfinder and want to share with everyone that it is absolutely amazing! Even though I already own it, I will be buying the 5e version too.

Sasquatch Game Studio already has an agreement with WoTC. They created Princes of the Apocalypse. So, I'm thinking they have permission to use all the 5e terminology, etc for this product. No need to do conversions and what not.

I already have the 13th Age version of this, and while it's cool beans, I sure won't be springing for a 5e book.

I wonder if there's some way to discount the pdf for previous backers. If you bought a book in the previous KS, you got all three (PF, 4e, 13A) pdfs for free. Not looking for that deep a discount, but I'm also not paying full price for something I can easily convert, myself.

Galendril said:
Sasquatch Game Studio already has an agreement with WoTC. They created Princes of the Apocalypse. So, I'm thinking they have permission to use all the 5e terminology, etc for this product. No need to do conversions and what not.
Click to expand...

Just because they were contracted to produce an adventure for WotC doesn't mean they have permission to produce whatever 5E material they want going forward.

JohnnyZemo said:
Just because they were contracted to produce an adventure for WotC doesn't mean they have permission to produce whatever 5E material they want going forward.
Click to expand...

1. That is a true statement.
2. That's not what I said.
3. If you want to turn this into a ridiculous internet argument, I'm going to stop right here.

The article does say the open gaming license will be used. I suspect they're doing what other 5e publishers are doing and simply adapting the original OGL to make it work.

lkj said:
The article does say the open gaming license will be used. I suspect they're doing what other 5e publishers are doing and simply adapting the original OGL to make it work.
Click to expand...

That's exactly it. Dave Noonan's exact words were "We're going with the tried-and-true OGL for this, and we've had great legal advice throughout the process."

I backed the kickstarter for the 13th age version. The book is pretty mechanics light, so it would be cool if backers could get a cheapish 5E conversion document. I'd like to see more detailed setting info for the world.

On the upside, it looks like they already have 3 adventures out!

Thanks for the kind words, everyone!

We'll get some preview material together to share here once we pull the lever on the KS campaign. If there's something specific you'd like to see, let us know and we'll see what we can do. We can't preview *everything*, but we might as well preview what folks are most curious about.

If you're going to Gencon, you can take a look at the existing Primeval Thule books at our booth. (They won't be 5e Thule, but you'll get the general idea.) Plus there's a "Traveler's Guide" preview of Primeval Thule up on DriveThruRPG.

I've been waiting for this! After hearing the Sasquatch folks plug this setting (occasionally described as "Conan vs. Cthulhu) in several podcast interviews, I kept hoping they'd eventually get around to making a 5E version. I will be backing this Kickstarter!

For David Noonan, or for anyone who has the previous versions of this setting - are all core classes and races allowed in this setting? I've seen campaign worlds that, for example, disallow a class like the Paladin, or a race like the Dragonborn, for thematic reasons.

I have no trouble seeing Paladins or Dragonborns or any of the 5e core races and classes in a setting like this. But I just wanted to make sure all races and classes are allowed before I get too excited about this setting.

Because it really does sound amazingly awesome.

All core races and classes allowed...and Primeval Thule has a new race: Atlantean.

That said, not every race is equally prevalent. Thule has a lot of untamed wilderness, and it's conceivable that more obscure races are found in only one part of the continent. (I often play PCs like that..."I'm a wandering ______, proud traveler from an exotic land" or "the last of the ______s, whose fell empire once stretched from mountain to sea.")

I like things that are rare in the fictional world but not necessarily rare at my gaming table.