[UPDATED AGAIN!] CURSE OF STRAHD Will Be Available March 15th

The new Dungeons & Dragons storyline will be called Curse of Strahd. I'm hearing that Tracy and Laura Hickman, who wrote the original 1983 Ravenloft adventure, have some involvement, and it will be set in Castle Ravenloft. The PCs will be sent to Strahd's realm by Madam Eva (using a tarokka deck). While the Ravenloft name is being used, I don't know if it's actually set in a demiplane or if it's set in the Forgotten Realms, but the land of Barovia certainly exists. More if I hear it! 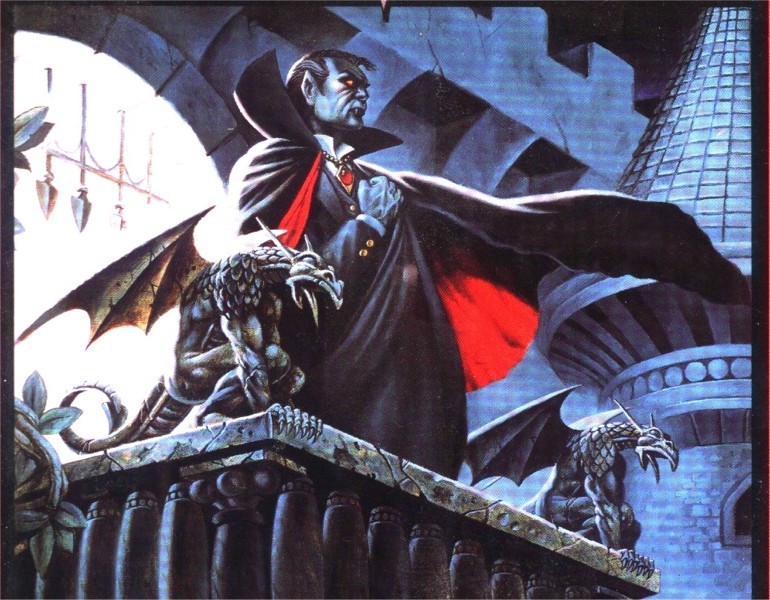 Ravenloft was originally an adventure in 1983, and later became an entire campaign setting set in a pocket dimension called the Demiplane of Dread. The original adventure, for AD&D 1st Edition, has Strahd von Zarovich, master vampire, as its main villain. The land of Barovia is surrounded by a magical fog, and Strahd rules the domain. The adventure featured an interesting card-based random generation process which determined the locations of items, NPCs, and Strahd's motivation, making the adventure replayable. Strahd was an intelligent villain who loomed over the entire adventure, taunting the PCs throughout. Strahd is probably one of the most well-known D&D characters, after Drizzt and Elminster, and possible some Dragonlance characters.

I don't know how much of that old adventure matches the new storyline. I hear that Strahd's love story is at least cited, if not part of the adventure, and that it is shorter in scope than the previous adventure paths. WotC has sent some preview images to various outlets, as I reported yesterday, and the announcement is coming on Monday.

Personally? I am really excited about this. I can't wait to run it! Out of the storylines so far (and I really liked the Underdark whimsy), this one probably hits me right in the sweet spot. I was hoping for this.

The book is on Amazon already, albeit with no cover image, and is available for pre-order. 224 pages, $49.95, March 15th , 2016. With these 'placeholder' Amazon pages details sometimes change; but here's the product description:

Under raging storm clouds, the vampire Count Strahd von Zarovich stands silhouetted against the ancient walls of Castle Ravenloft. Rumbling thunder pounds the castle spires. The wind’s howling increases as he turns his gaze down toward the village of Barovia. Far below, yet not beyond his keen eyesight, a party of adventurers has just entered his domain. Strahd’s face forms the barest hint of a smile as his dark plan unfolds. He knew they were coming, and he knows why they came — all according to his plan. A lightning flash rips through the darkness, but Strahd is gone. Only the howling of the wind fills the midnight air. The master of Castle Ravenloft is having guests for dinner. And you are invited.

Some more snippets of info:

Whelp, we certainly know how to call things around here, now dont we....

Care to provide some source on this breaking news? or is this is wild speculation? without any backing source I'm not going to believe anything till I see a Press Release from WTOC... it's not news if there is not PR behind it.. Anyone can make up anything..

All other credible news sites are saying nothing is known, till Monday other then teaser pics...

Vampyr3 said:
Care to provide some source on this breaking news? or is this is wild speculation? without any backing source I'm not going to believe anything till I see a Press Release from WTOC... it's not news if there is not PR behind it.. Anyone can make up anything..
Click to expand...

Go to the official site. Search it for Strahd.

Curse of Strand? I think you have a typo.

Here's hoping they get it right. Setting Ravenloft in the Realms would be an awesome way to f* it up.

Only way I can figure this works is some sort of minor conjunction, Barovia or maybe just Castle Ravenloft appears somewhere not heavily populated in FR for a short time.

Remathilis said:
Go to the official site. Search it for Strahd.
Click to expand...

Wizards of the Coast announced Curse of Strahd, a new Dungeons & Dragons adventure set in Castle ... the authors of the original Ravenloft adventure published in 1983, Curse of Strahdpits players against ... the vampire Strahd von Zarovich. Curse of Strahd will be available to everyone on March 15, 2016. 01/11/2016 ...

News Today, Wizards of the Coast announced Curse of Strahd, a new Dungeons & Dragons adventure ... and Laura Hickman, the authors of the original Ravenloft adventure published in 1983, Curse of Strahd pits ... players against the vampire Strahd von Zarovich. Curse of Strahdwill be available to everyone on March ...

Madam Eva. Drawing random cards from her tarroka deck, she directs adventurers to search Strahd’s domain ... the power of Madam Eva for yourself. D&D fans can have their own distinct fortunes read each day ... by retweeting the official Wizards_DnD Twitter account using the hashtag #DNDFortune. Madam Eva’s fortunes

Links leading to no where... so not reliable at all.

Nikmal said:
Links leading to no where... so not reliable at all.
Click to expand...


Nobody minds if you want to wait until Monday, I promise.

Nah just posted by the owner of the biggest 5E site on the internet, totally made up by that mad Morrus.

He even evilly and diabolically added these snippets, which are not at all headers awaiting activation on Monday, of info to the WotC site. Curse (of Strahd) you Morrus, you strike again!

Nikmal said:
Links leading to no where... so not reliable at all.
Click to expand...


Your personal requirement of proof is not someone else's problem.

Looking forward to this and just like Rage of Demons.....the marketing strategy that many lamented seems to actually be working for most. People are psyched up for the new story line and it doesn't just get lost in the 10 minute attention span of the social media peeps.

So when WotC has done this before... they took them down and the book never came out.. and yet ENWorld linked that and rumor was abounding about that book. (The Adventurers Guide) So... Yea I guess... WotC never messes with people like that. Or they are completely perfect.

They have already given geek and sundry an image and an interview for Monday. Wanna bet that interview took place days ago? Both images given out by wotc had a Ravenloft theme.

Staff member
This one really excites me. I can't wait! I really liked the Alice in Wonderland inspired stuff of OotA, but Ravenloft? That's taking it into the stratosphere for me. Officially excited.