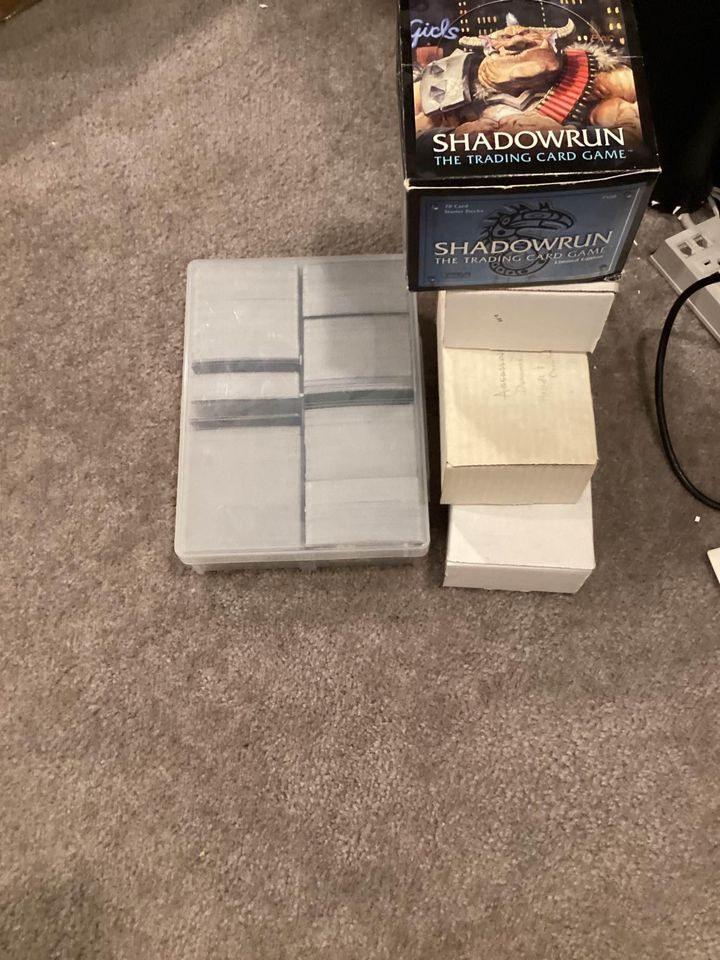 Chances are if you’re like me, you’ve got a few cardboard skeletons in your closet. Magic: The Gathering has been around since 1993 and in the intervening years hundreds of games have tried to capture the imaginations and the wallets of gamers by getting them to buy lots and lots of cards. These games might have been played for a while. They might have been tried once or twice but never caught on because there wasn’t someone else willing to buy in. They might even be ones that you played a lot but have fallen by the wayside due to newer games or other real life issues. You could try to sell them on the secondary market…or you can use them as ways to improve the RPGs that you’re currently playing. Here are a few ways I’ve used my old cards to inspire stories in other tabletop games.

One of the best things about collectible card games is often the art. It’s eye catching and inspirational which is perfect for the GM who might be scrabbling for game ideas. Flipping through old binders or stacks of cards can spark plots, characters or magic items just by looking at the cards you already have. Think of this process like a game of Dixit or Mysterium where you interpret the art to fit an idea. Do you need an archwizard to vex your players? Time to flip through your rares looking for a caster type. What does that glowing blue blade do in your homebrew world and where is it hidden?

You could also look at the card type as a jumping off point. Shuffle together a deck of old cards and then pull three. One is the setup, one is the complication and one is the resolution. Slot the cards in the spot that you like. For example, if you have a firebolt, an ork chieftain and a mountain card, there are a few ways to go. The chieftain could seek a powerful magic item on a mountain and the players have to get it first. Or the chieftain was wounded by a magical attack and the players have to climb a mountain to go get him. Short prompts like this a meant to spark a storyline when looking at the blank page just isn’t working.

When I ran the latest edition of Over The Edge for Theatre of the Mind Players, Atlas Games sent the games using boosters and starters for their old On The Edge CCG as packing materials to keep the books safe. (They’ve been doing this for YEARS, so they must have a lot of those cards left over from the 90s) The new edition of the game also has a plot twist mechanic where if you roll a certain number you can get a good plot twist, like a secret ally leaving behind a password, a bad plot twist like an enemy agent coming out of nowhere to ambush you or even one of each at the same time. Life on Al Amarja is unpredictable that way. I had my players take a couple boosters, crack them open and choose a couple of cards from each deck. Then I took those cards, shuffled them into a big conspiracy deck and whenever a player rolled a plot twist, I drew a couple of cards for inspiration as I weighed the sudden twist of fate.

This method is a great use for games already connected to RPGs, such as Doomtown, Shadowrun or The Eternal Struggle. Many of these games are connected to those games' broader stories which offer players a chance to select which metaplot elements they might want to interact with. But it’s also fine to use them to generate story beats that are more focused on the game at hand. Drawing a Stone card doesn’t mean the literal character has to show up in your Deadlands game, but there’s probably an intimidating gunslinger character that your players will think twice about facing who can fit the bill.

This option requires a little bit of arts and crafts. A quick check online to make sure you’re not demolishing a valuable card also probably wouldn’t hurt. You’ll need a few common cards, 1” circular hole punch, some craft glue, and a round counter such as a wooden chip or washer. Take the commons and use the hole punch to cut out the art on the card. Then glue the punched out circle onto the washer. If you use two cards per counter, you can mark one side as a common condition in the game, such as blooded or Shaken.

I’ve always liked the idea of big combats on massive tabletop grids but I never had the budget to match. Using a bunch of old commons like this can really give a sense of scale. They also match well with bad guy minis. The miniatures are the bosses and the bad guys are the minions!

Have you done anything crafty with your old CCG cards? Let me know in the comments!
Click to expand...

I've been doing this for years. Heck, almost the only use I've gotten out of CCGs has been props in my RPGs. In 1997, I attended my one and only GenCon. I hit Atlas' booth, and they had this deal on "On the Edge" cards. And the guy was telling about this game. I'd played and loved "Over the Edge," but had never heard of the CCG. And as the guy showed me the cards and explained the play to me, I was just thinking, "these'd make great props in my game." I ended up buying a deal of something like two boxes (3?) of the cards. And I didn't want the guide to the game, so they gave me one of Robin Law's books set in Al Amarja.
Anyway... Used those for about a year until the OTE game ended.

I have a bunch of Shadowfist cards, which made great props for Feng Shui, and even made a few appearances in other gonzo games.

I never got into Magic, but I've... uh.... borrowed some of my son's for props over the years.

And when there was a Ninth World card game, I backed the project just to get cool art for my Numenera game.


About the only CCG I have actually played in the last 20 years has been Illuminati New World Order. And I'd love to find a Roleplay use for the image of Hillary holding the leash, and Bill wearing the collar.

TL,DR:
A) You can get inspired by stuff (shocker, right?!)
B) A bunch of cumbersome little "hints"

Ramaster said:
TL,DR:
A) You can get inspired by stuff (shocker, right?!)
B) A bunch of cumbersome little "hints"
Click to expand...

Hints would be for clues. The word you are looking for are "tips."

As far a tips go, we can agree to disagree as I thought these were useful.

I haven't gotten into solo rpg gaming yet (I'm spoiled for zoom and in person play atm), so I never thought of the oracle angle. I also avoided most CCGs so I don't have a backlog in my closet. Though if I did, I could totally see myself turning them into creature tokens to the horror of my friends who still play.

I would dearly love to find some use for the dead CCG cards I have stored at my parent's house.

I had a friend who made to either Magic's first Origins or GenCon. He even bought several decks so he could give them to us and have us play. I enjoyed it but never caught the passion. I kept my Alpha deck though.

Later on when I had some dark finical dark times in the late 90s, I paid the rent with that deck.

Likewise, Von Ether! All I have left is one overpowered yet strangely ineffectual deck. (Takes too long to develop.)

Some cards I wish I kept, and was really into collecting, was a game that involved angels. Angels were individual cards, I think it was very Gnostic in theme. I used to look through those for inspiration, although I ended up selling them when I needed to debulk to move.

Von Ether said:
I had a friend who made to either Magic's first Origins or GenCon. He even bought several decks so he could give them to us and have us play. I enjoyed it but never caught the passion. I kept my Alpha deck though.

Later on when I had some dark finical dark times in the late 90s, I paid the rent with that deck.
Click to expand...


My cousin sold off his early card collection for a down payment on his house.

I was never so lucky.

Well, I did buy (very cheeply) a couple of startersets of Wyvern, which is unplayable, and use them as archery-targets at 18m distance with my longbow..

Staff member
1) I toyed with the idea of using CCC cards like they do in Everway, but never fully implemented it. Ditto Deadlands.

2) I’ve frequently used CCC cards to inspire player characters. The first was a 2Ed character based on the Hurloon Minotaur. This is my most common nonstandard use.

3) I have statted out creatures & NPCs from CCCs for games as well.

Not CCGs, but I use True Dungeon tokens for Bennies, Inspiration, etc. There's a good heft and usually nice art. I've cannibalized Warhammer models and terrain as well as other board games for physical components.

Not a CCG, but Flying Frog's Fortune & Glory is a near-perfect scenario generator for Evil Hat's Spirit of the Century.

Plus, it's a damned cool not-quite-an-RPG on its own. Wishing FF would reprint the core box...

Shadowrun has a set that just got successfully kickstarted and will be compatible with the old cards. Called End Zone.

Unfortunately all my old cards got stolen.

aramis erak said:
Not a CCG, but Flying Frog's Fortune & Glory is a near-perfect scenario generator for Evil Hat's Spirit of the Century.

Plus, it's a damned cool not-quite-an-RPG on its own. Wishing FF would reprint the core box...
Click to expand...


I wish they would put out the expansions they've promised for years...

My favorite CCG for this is Spycraft. Great 4-color art for lots of modern games. NPCs, gear tokens, and plot twists or advantages/disadvantages in Genesys.
I've also used Netrunner Agenda cards make a deck of tips from contacts about stuff the corps are doing, turning into triggers for side missions.