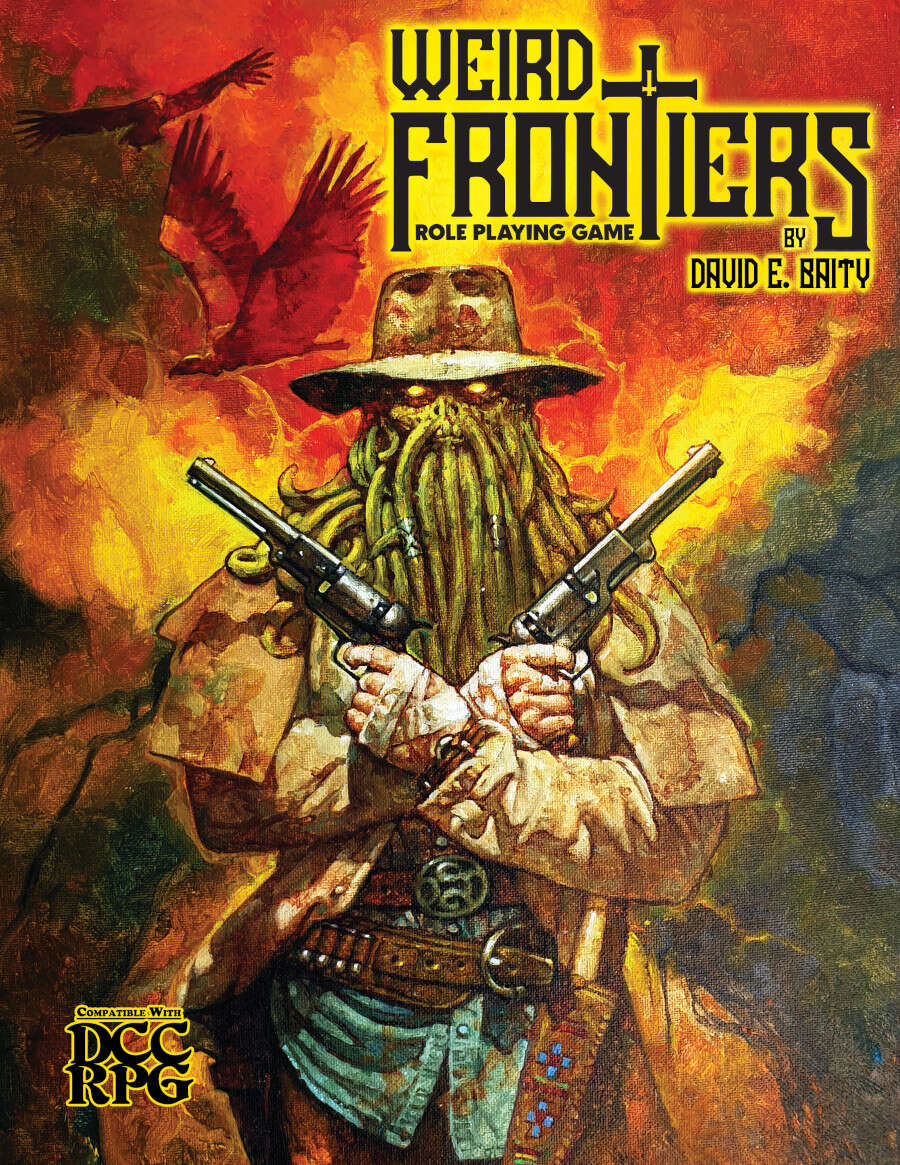 It’s been a good year for fans of Weird Westerns. Deadlands came out with a brand new edition updated to the latest Savage Worlds rules set and a new campaign to take players from novice cowpunchers to Veterans of the Weird West. Haunted West gives tables the tools to tell tall tales from the perspective of the disenfranchised and little heard voices of the west. Designer David Baity recently took the weird fantasy rules of Goodman Games’ Dungeon Crawl Classics and adapted them to Weird Frontiers, a semi-apocalyptic Western setting featuring ghost guns, occultists and not one but two ways to play characters even after they’ve set up shop on Boot Hill. He sent along a review copy via undead Pony Express rider. Let’s see how it measures up.

Weird Frontiers sets up a Western world at a tipping point. Some nefarious Cthulhu cultists tried to end the world using a ritual called Seven Days of Night but were stopped by a band of heroes. It wasn’t exactly a clean victory; plenty of creepy creatures slithered into our world and stalked the lonely places on the frontier. It also means Earth’s natural defenses have been activated; namely, magic. That’s where the PCs come in. Once normal folk on the frontier, each character has been touched in a strange way by inscrutable energies and now ride the prairie using their powers for good…or, perhaps, not.

This setup offers an interesting angle on the funnel-style character creation and zero level play that Dungeon Crawl Classics is most famous. For the uninitiated, players are expected to make a handful of zero level characters at the start of a campaign. The characters that survive the first adventure are the ones who move forward in the campaign with their experiences starting them on the path to whatever heroic character class makes sense. Weird Frontiers suggests a pretty easy campaign setup; the zero level characters are all residents of a frontier town that gets attacked by some strange beast some night and the ones who make it through are rewarded with strange abilities to hunt more of these creatures. The included 0-level adventure focuses on a very, very doomed wagon train heading west that will have the surviors - if there are any - ready to spit in the eye of any Deep Ones that cross their path.

What that means for the main classes in the book is that all of them are magic users to some degree. There are classes that have been in other Weird West settings such as mad scientists, kung-fu fighting monks and mystic gamblers. In addition there are ones that offer a unique flavor to this game. My particular favorites included the Hellbelly, a moonshiner that gains power from fey-touched booze they make in their stills, and Calaveras who can interact with the spirit world and the spirits of those already gone. There are two optional classes that can be used to bring a beloved character that died in the funnel back into the game: Sin-Eaters are souls sent by Charon to make sure all the newly dead people get across the river Styx, while Tommyknockers are more of your classic revenant with dark powers. A special honorable mention goes to the luchador, because this is the type of game where you can suplex a Shoggoth out of the saloon window.

These classes give players some great options, but they also add complexity to the game. Each one has a few pages of class features, most of which are available from the jump. Fans of simple character builds and ones who enjoy choosing new abilities on every level might feel a little overwhelmed by the options here.

The book is a standalone game, though it does a good job of explaining the Dungeon Crawl Classics system and following in its graphic design footsteps. The art is mostly clean black and white pieces, though they don’t have that notebook doodle ramble that official DCC books get in places. If you want to keep this strictly Western there’s enough material to do that here, but having other books and adventures from the original game won’t hurt. The lines are strange enough that a magical portal where gunslingers and alchemists fight monsters back to back with sinewy elves and buff fighters doesn’t seem too far out of place.

The book has an extensive bestary featuring a mixture of Mythos beaties, mythical indigenous creatures and creations unique to this book. There’s some discussion about using monsters from other game lines along with a table that offers random ways for the influence of the Elder Gods to mess with those write ups and make them unique. For anyone going through Lovecraft fatigue, the Cthulhu backstory is probably the least essential element of this game and could just as easily be turned into demons or some other creatures not of this earth. Monsters built in this design space are meant to be unique for every encounter and the book has plenty of examples to inspire.

The most inspired mechanic in the game is the gun deck. Each player keeps a deck of cards handy and flips over a card when they shoot. If they pull a face card, it’s a bonus to hit and damage. If it’s an ace or an eight, it’s a fumble. Jokers act as critical hits and misses. The deck trumps any critical hits or misses rolled. Players can reshuffle their decks by cleaning their guns during downtime. The gun deck is a fun way to increase the danger of firearms in a fantasy system which often struggle to handle their advantages and disadvantages when added to swords and bows. If I had to swipe one mechanic for DCC this would be it.

Weird Frontiers is a solid journey into the weird west that shows the versatility of the Dungeon Crawl Classics rules system and offers some unique takes on Western tropes. What it lacks in historical accuracy it makes up for with a sense of unusual choices and a feel of a 2 AM movie that you might not be sure if it was real or a dream.

If you found this review useful, please consider using the affiliate links contained within to purchase the subject. Every purchae helps your friendly local game writer.
Click to expand...

Hard copies of the book are still available for pre-order here.

robowieland said:
The most inspired mechanic in the game is the gun deck. Each player keeps a deck of cards handy and flips over a card when they shoot. If they pull a face card, it’s a bonus to hit and damage. If it’s an ace or an eight, it’s a fumble. Jokers act as critical hits and misses. The deck trumps any critical hits or misses rolled. Players can reshuffle their decks by cleaning their guns during downtime. The gun deck is a fun way to increase the danger of firearms in a fantasy system which often struggle to handle their advantages and disadvantages when added to swords and bows. If I had to swipe one mechanic for DCC this would be it.
Click to expand...

So how does this effect melee weapons and Mighty Deeds? Or are they exempt from the using a deck of cards as well?

At first quick glance, I thought the cover was by Daniel Brereton but was by SanJulian. I’ll be checking this out to see if our group is interested as we’ve played DCC before and enjoyed the change in game style.

Weiley31 said:
So how does this effect melee weapons and Mighty Deeds? Or are they exempt from the using a deck of cards as well?
Click to expand...


The gun deck is only used for firearms.