When Jamie Van Doren, Founder and CEO of NeverEnding, approached me about a review of their new RPG platform, I jumped at the chance to learn more. A program that lets you create your own art, characters, and animate them? Yes please!

Mike Tresca (MT): How did the idea come about for this platform?
Jamie Van Doren (JVD): Something like NeverEnding had been churning in my brain for a while. I love D&D. I’ve played different TTRPGs since high school, mostly Advanced D&D and now 5E, the old Marvel Superheroes Game, Ars Magica, but other stuff on occasion too. No matter how good the story or adventuring moment, when I tried to explain it – it fell flat. I’d get polite nods or blank stares. People didn’t understand the game, so they couldn’t picture the action I had so vividly locked inside my head. They needed a visual that I couldn’t give them. Heck, I like visuals when creating my character. But I’m not an artist and I don’t like stealing art off the internet. I know most of my friends aren’t artists either, and so I thought “why can’t we build an app to help people create their character portraits and also animate and share their best story moments?” The idea has grown from there. We’ve talked to game masters who want to use the app to create cut scenes. We’ve heard from players with disabilities or from different cultures who want to use the app to create characters and stories that reflect their experiences. Really, there are as many uses as there are people with story and gaming ideas.

MT: NeverEnding was Kickstarter funded. How did that go?
JVD: We launched the Kickstarter in part, because we weren’t sure if people would even want a tool like NeverEnding. Well, that and the fact that we needed to pay artists to develop the assets and developers to code the app. We went gangbusters the first day – almost 50% funded in the first few hours. But then, out of nowhere a bunch of people canceled their pledge. To this day I don’t know if we were being trolled, if it was because of concerns with Covid, or what. But it killed us with the Kickstarter algorithm. Thankfully we still managed to exceed our goal, but we were biting our nails the whole time. We’ve put those funds to good use, and launched a pretty robust Beta of the Character Builder. It’s unfortunately been slower than expected. This was my first software company, and there’s a lot I just did not know when we were first starting. With the pandemic we also had some team members that were pretty crucial to the project have to leave to focus on family, childcare, and their own health. That said, we’ve rebuilt a fantastic, talented, and diverse team. We’re still all passionate and dedicated. I’m actually really happy with the progress we’re making.

MT: What types of players/game masters will be interested in NeverEnding?
JVD: In some ways… all of them. I mean, for a new player or a new game master even just having portraits for player characters and NPCs can be really useful. Being able to quickly get a randomized NPC or having a place to write out NPC and player bios is great for people of all experience levels. Once we launch the Scene Creator and the Story Animator, I think the most value will come for people who want a more immersive experience for their game OR have weeks between sessions. For the former, I think being able to include cut scenes that you show your players’ characters before a big battle will just up the excitement and immersion. For the latter, the ability to turn the last session into a webcomic or an animated video will be a fantastic way to help keep players engaged. Something like that would even help me, as the DM, better remember what happened last session! I see tons of uses, from party portraits, to vttokens, to opening scenes for streamers – really the list goes on.

MT: What features are currently available?
JVD: Right now you can create custom character portraits, including adding bases and backgrounds. You can even turn those portraits into tokens for platforms like Roll20.net, Foundry, Astral or something else. Players and game masters alike can also write up bios for their characters and NPCs. We also have an NPC generator that’s available in a sort of prototype mode. We’re working on classifying all the assets so if you select that the NPC is a Tavern Keeper, they look more like a tavern keeper than a guard. The standout feature for that tool is the descriptions. You get four statements that relate to the NPC’s personality, outlook on certain people and a region, and their goal or hope. For most NPCs I think having clues to their personality and how they might interact with your players is more useful than knowing their strength and dexterity scores. From a social perspective you can create a profile, browse other profiles (if they’re public), and browse public characters. Soon you’ll be able to favorite profiles and characters. Which is great if someone is looking to show off and share their best NPCs and character ideas.

MT: What features are planned and when will they be released?
JVD: Oh, man. There is a lot planned! We’re rolling out more body types over the next couple of months, as well as more prosthetic options. We’re also modeling all the assets so they’ll be poseable. That means instead of simply forward facing they can be sneaking, swinging a sword, casting a spell from a wheelchair – lots of options. Our goal is to have those options out by September or October. While we’re continuing to develop free assets, soon you’ll be able to purchase expansions. This is really helpful for people if they want – well, let’s call it a laser sword for a space monk or something like that. It will also allow us to create a lot more options that might be a little niche. We’re expecting you to be able to create at least party portraits and simple scenes with the Scene Creator in November. The modeling of assets is a bigger lift than we expected, so we just brought on a couple more team members to accelerate that process. We’re most exited for the Story Animator tools that will allow you to turn your ideas into animated videos using a variety of pre-programmed animations. Officially the target date is February 2022. But we expect to open it to Beta testing sooner than that. It’s a lot of exciting stuff on the horizon!

MT: NeverEnding is a subscription service. What are the tiers of support?
JVD: Yes. We went with subscriptions, so that we can continue to provide support and rollout new art and new features for our members. All our subscriptions are on sale right now. We have a free tier called “Villager,” a monthly subscription for $1 per month called “Hireling”, and an annual subscription for $9 called “Hero.” Hero is the best deal because it unlocks the most assets. I should note two important things. Right now we’re doing a sort of X-Mas in July event and all of our premium assets are available for free. However, come August, our sale prices won’t be quite as on sale. Our monthly will be $2 per month and the annual will be $12 per year. The really important thing is that if people sign up before the prices change, they’ll be locked in for at least a year to those lower subscription rates. 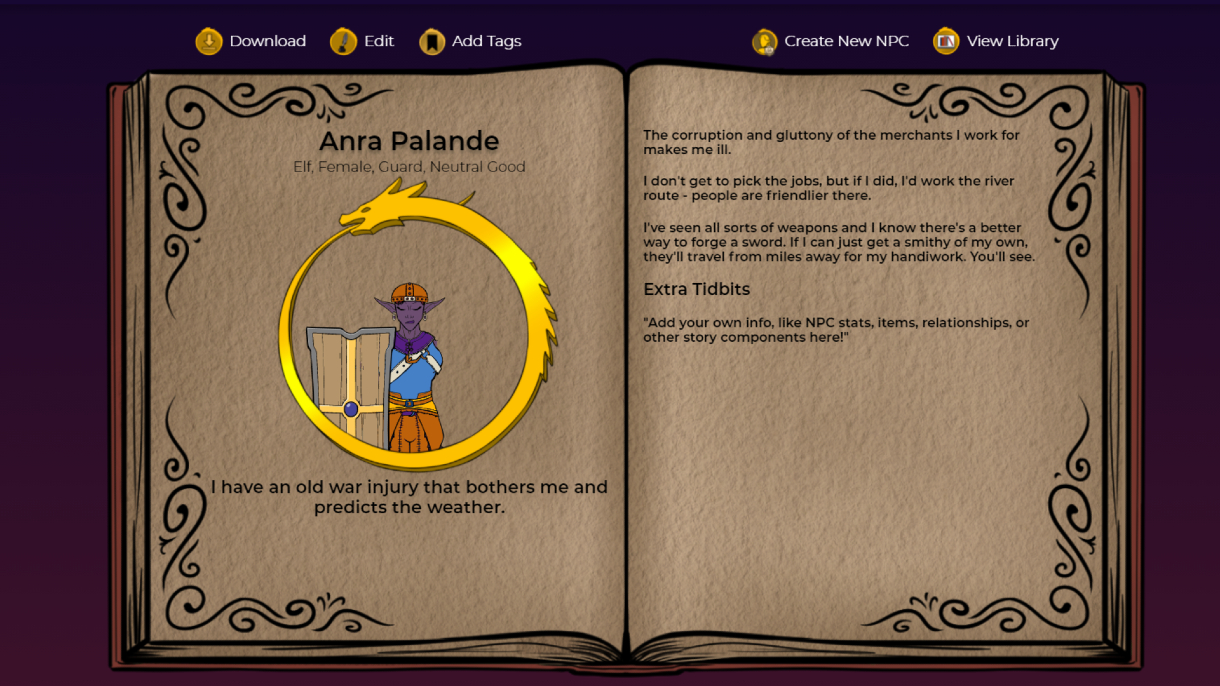 MT: For someone who would like to use the content on DMs Guild or DriveThruRPG, what is involved to use NeverEnding with a commercial license?
JVD: First they need an active annual membership or to have backed us on Kickstarter. Next there is a really basic form for them to complete just sharing basic info about themselves and the publication. The URL for the form is NeverEnding Free With Attribution Commercial License Request Form. As part of that form they have to review and agree to our commercial license terms, which are pretty straight forward. When they include our assets they simply need to provide proper attribution for the art in their credits. They can do this by listing which pages our art appear on or that it’s all art from NeverEnding. They also need to include the link to our app – beneverending.app. We tried to make it very easy for people, because we want to be a good resource to creator and the whole gaming community.

MT: Where can fans find out more about NeverEnding online?
JVD: There’s some great info on our website, beneverending.com and of course, you can sign up for free and start creating characters at beneverending.app.

MT: Anything else you’d like to add?
JVD: Everyone should stay tuned for a lot of new art. We’re really working to expand character options inspired by legend and stories from different cultures. We’re also working on additional prosthetics, so there will be more options coming there too. Lastly, we’re still looking for potential Twitch streams to sponsor, so if you have a decent following and you want some free character art for your stream, reach out to us! You can reach us at hello@beneverending.com.
Click to expand...

Interesting but more integration with virtual table tops would help. Keeping a sharable journal of exploits is our group's challenge now.

I wonder if the next one will be a Japanese game-live streaming show but played by virtual avatars.

It's fun to have a bunch of similar services in my pocket. I use ReRoll and DM Heroes, and will absolutely use Neverending too.

The ability to do scenes is what's really going to push Neverending over the top for me.

imagineGod said:
Keeping a sharable journal of exploits is our group's challenge now.
Click to expand...

I'd love to hear more about this idea! What would you need it to do? What are you using that doesn't work?

bedir than said:
The ability to do scenes is what's really going to push Neverending over the top for me.
Click to expand...

Glad to hear it! I'm personally really excited by the scene builder too. It's a Lot of work, but totally worth it.

I love the idea, but sadly I don’t like the visual style And I suspect my players won’t either…

Augreth said:
I love the idea, but sadly I don’t like the visual style And I suspect my players won’t either…

Sorry for the long delay in replying. We have new facial features coming out this week and next which are more of a mature anime style.

We plan on adding additional art styles/genres as we move forward. It's all a work in progress.