What do you do with your old RPG notes/maps/NPCs/PCs/etc?

I was going through a bunch of binders, notebooks, and loose papers last night.

Found the notes from my Megatraveller campaign of the early 90's; and the GURPS campaign I ran with a buddy in the late 90's; as well as the binder for the Dungeon World campaign I ran for a couple of years in the mid-teens; and all the material from the 4e campaign I had prepared to run for my sons in the late oughts, including their first characters...

I can't bring myself to toss them; but I'll never use them again. If I was to run any of the above - I'd do it using new stuff, with probably different rules; etc.

What do people do with the artifacts of games past?

Scan it into the computer and shred and recycle the paper. You can always use the scanned docs as inspiration
Upvote 0 Downvote

Apparently I leave them with friends. An old friend of mine gave me an overflowing three-ring binder a couple years ago when I started playing again. I must have given it to him around 1989, before I went to college. I'm glad to still have the physical version. Old crinkly graph trace paper, characters written in pencil on loose-leafed college-ruled pages, they exude nostalgia. Looking over the materials, I can see that my spelling and punctuation is (a bit) better, but my graphic-design skills are not much improved. 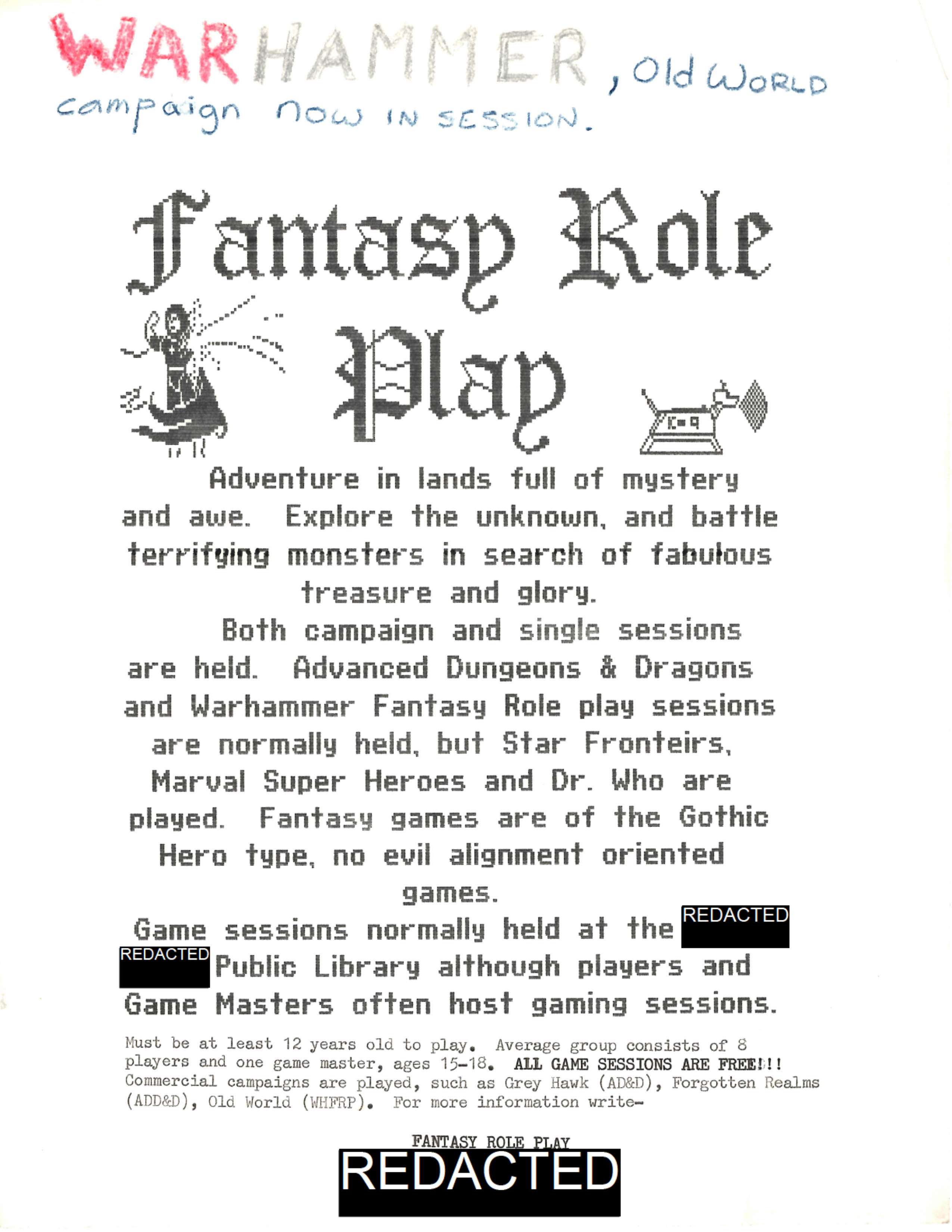 I went fully electronic years ago, so I recycle documents, and often re-use pdfs.

Other than some stuff from '79-82, I threw all the rest away in various moves.
Upvote 0 Downvote

I have lost most of mine during moves.

However, my friends have tons of our original stuff. But I believe all the adventures I wrote are gone with the exception of say the last 15 years.
Upvote 0 Downvote

Supporter
They're mostly in a box in the basement... I should probably scan a lot of it in just in case.
Upvote 0 Downvote

They sit in folders on my bookshelf.

I've lost tons and tons of stuff; the oldest notes I have are from a 3.x campaign I ran back in 2002-2004. I really wish I still had the character sheet from my first character ever, back in 1994.

I reuse ideas and sometimes NPCs and items. I had a villain who has appeared and tormented players and characters alike across multiple campaigns, games, systems, and genres from about 1995-2003. Everybody hated him, and my friends, former players still talk about those adventures.

Reduce the ones with bloated info, reuse the revised or already good ones, recycle the scraps of the truly awful ones.
Upvote 0 Downvote

I've kept everything from the early 90s onwards since I have been DMing the same campaign setting since the beginning. I've also written some novels in the same setting, so they are useful in that sense as well.
Upvote 0 Downvote

I still have some old folders and binders laying around but lost or threw out a ton of stuff over the years. I used MS word and other programs to create my adventures since the late 90s so most of that stuff is on a hard drive but finding anything Im looking for is pretty much a fools errand although I do get lucky from time to time. What I get a kick out of is the notes I find that were humidly scribbled during play on printed out adventure notes. Some of its pretty hilarious if I can remember what its about, others I cant read or make no sense. As I generally dont re-use old adventure ideas theres not much use for most of that stuff so I'll probably go through it soon and get rid of what I dont want.
Upvote 0 Downvote

I have boxes of old game stuff, though right now it's all rather jumbled together, as I had a tendency to keep the binders and folders with the game books they came with.
Upvote 0 Downvote

Hold onto them like a packrat goblin - I mean trained archivist. I have some very old character sheets, though I think my adventure and campaign notes only go back to the late 90s now.

It was interesting to go back and see how I've grown as a DM since then.

I keep it all, often in the hopes that I will get further use out of it in the future. Often, this proves true- I love "return to" style adventures that take pcs back to places other groups have gone, and I have run a single setting for decades now, so all those old notes add depth and detail to the place's history.
Upvote 0 Downvote

I have a number of binders on the bottom of one of my book shelves.
Characters (mostly D&D/PF), npcs, maps, misc*, Ravenloft, "Adventures" (things I've written), & Campaign notes.

●Characters - once I'm done playing a character I'll type up a final, legible, character sheet, a history, & a lv by lv breakdown page of what feats/stat adjustments, etc were made. That way if I ever have need or opportunity to reuse them (and I have)....
●NPCs - this file is much thinner. Most NPCs i save take the form of a page or two long write up, often says stats.
●Maps - a very thick binder. I've no problem reusing maps. This thing is full of both stuff I've drawn & stuff I've copied (that way I dont need to pull out/or even buy modules)
●Ravenloft - this binder contains notes from every time I've run I6, I10, House of Strahd, Expedition to, or CoS.
●"Adventures" - sometimes I write someting I'm damned proud of. Or just really like. Or something that will be used/referenced in years & games to come.
A copy gets filed here. And updated as needed.
Theres only about a dozen entries.
●Campaign notes. Once a campaign im running wraps ill write up a summary & file it.
Sometimes it'll serve as future inspiration.
Sometimes just a hardcopy glimpse into my gaming past.
●Misc. - a catchall binder for, well, misc stuff. I've actually got a binder of misc for most games I play. Some thicker than others. Mostly they're slotted into the shelves along with the various systems/games they apply to.
●Vampire Campaign- this is the only one that falls into the category of "Will never be used again, but I can't part with it".
In the late 90s (mid 97- 98) the group i was running Vampire/World of Darkness with put A LOT of work into building a campaign, setting, story, npcs, etc etc etc.
The game is long done. The story it told was played in real time leading up to the change of the Millennium & cannot be retrofitted for present day use. PLAY began New Years Eve 1998 & ended when the clock struck 12:00 am 2k. The real time play, leading to that one real life moment was the schtickt. That particular moment is 20 years past.
Most of the people involved are long gone (some even deceased). Those of us left haven't touched a WoD book game-wise in nearly 20 years.
But I can't bring myself to get rid of that binder full of material from that final WoD game.

For my last original campaign - I put it together in one pdf, self-publish it with P.O.D. in soft cover and gave it to my players as a souvenir of the campaign. Only runs about $8 - $10 per book and my players really liked it.

I have boxes of campaign stuff from the eighties and nineties - scanning and disposing it is a good idea. The time to do it is a little daunting.
Upvote 0 Downvote

All of my physical notes fit into a milk crate. But I've been doing things digitally for years so I still have most of them. The biggest sadness is that a friend of mine ran a wiki for several things, and made an instance for me. I had a campaign on it where me and several of the players lovingly put in cultures and myths and all sorts of things from the setting. Background, etc. Players very into creating around their characters with narrative control. But that's been lost to the sands of time. (HD crash, and I eventually misplaced the backups of it I had made.)

Though for my most recent campaign I've moved from on my computer to google docs. Well, still have images and stuff on my computer, but each session get it's own working set of notes, etc.
Upvote 0 Downvote

They're around here somewhere....
Upvote 0 Downvote

pogre said:
For my last original campaign - I put it together in one pdf, self-publish it with P.O.D. in soft cover and gave it to my players as a souvenir of the campaign. Only runs about $8 - $10 per book and my players really liked it.

I have boxes of campaign stuff from the eighties and nineties - scanning and disposing it is a good idea. The time to do it is a little daunting.

I like the idea of scanning the stuff in and then making a POD book and providing to my players...
Upvote 0 Downvote

Someday, somebody from a Storage Wars -copycat show is going to find a library bookshelf full with all my RPG'ing stuff in all sorts of formats, pull out a 5.25" floppy disk, and ask " What do I do with this? "
Upvote 0 Downvote

And on real paper, too; I trust it far more than anything electronic when it comes to durability.

But yes, the boxes are beginning to accumulate a bit...