D&D General what would a good orc culture be like?

we have long made threads about whether orcs should all be evil,

this is not that thread

what would a culture of good orcs belike without losing the orcness that people like?

do not just say WoW as that is just a cheap answer.

A never-ending sports/buddy movie where all the orcs are like the hero protagonists rather than the evil, cheating antagonists. Think Knight's Tale but without Count Adhemar. All rivalries are basically friendly if boisterous, bar fights are common but end up with everyone sharing a keg afterwards.

yeah that goes into evil what with being slavers and child abuse.
(the Sparta bit)

Mind of tempest said:
yeah that goes into evil what with being slavers and child abuse.
(the Sparta bit)
Click to expand...

I like Eberron's druidic traditions farmers who are also guardians of nature deal.

I could easily see orcs being tough and martial, like medieval knights, following a good God. I think a kind of Pendragon Orc society could work

Give them the goliath lore:
''Their spirits take after the wandering wind, making them nomads who wander from peak to peak. Their hearts are infused with the cold regard of their frigid realm, leaving each goliath with the responsibility to earn a place in the tribe or die trying.

Driven Competitors.
Every day brings a new challenge to a goliath. Food, water, and shelter are rare in the uppermost mountain reaches. A single mistake can bring doom to an entire tribe, while an individual's heroic effort can ensure the entire group's survival.

Goliaths thus place a premium on self-sufficiency and individual skill. They have a compulsion to keep score, counting their deeds and tallying their accomplishments to compare to others. Goliaths love to win, but they see defeat as a prod to improve their skills.
This dedication to competition has a dark side. Goliaths are ferocious competitors, but above all else they are driven to outdo their past efforts. If a goliath slays a dragon, he or she might seek out a larger, more powerful wyrm to battle. Few goliath adventurers reach old age, as most die attempting to surpass their past accomplishments.

Fair Play.
For goliaths, competition exists only when it is supported by a level playing field. Competition measures talent, dedication, and effort. Those factors determine survival in their home territory, not reliance on magic items, money, or other elements that can tip the balance one way or the other. Goliaths happily rely on such benefits, but they are careful to remember that such an advantage can always be lost. A goliath who relies too much on them can grow complacent, a recipe for disaster in the mountains.

This trait manifests most strongly when goliaths interact with other folk. The relationship between peasants and nobles puzzles goliaths. If a king lacks the intelligence or leadership to lead, then clearly the most talented person in the kingdom should take his place. Goliaths rarely keep such opinions to themselves, and mock folk who rely on society's structures or rules to maintain power.
Survival of the Fittest.
Among goliaths, any adult who can't contribute to the tribe is expelled. A lone goliath has little chance of survival, especially an older or weaker one. Goliaths have little pity for adults who can't take care of themselves, though a sick or injured individual is treated, as a result of the goliath concept of fair play.

A permanently injured goliath is still expected to pull his or her weight in the tribe. Typically, such a goliath dies attempting to keep up, or the goliath slips away in the night to seek the cold will of fate.
In some ways, the goliath drive to outdo themselves feeds into the grim inevitability of their decline and death. A goliath would much rather die in battle, at the peak of strength and skill, than endure the slow decay of old age. Few folk have ever meet an elderly goliath, and even those goliaths who have left their people grapple with the urge to give up their lives as their physical skills decay.
Because of their risk-taking, goliath tribes suffer from a chronic lack of the experience offered by longterm leaders. They hope for innate wisdom in their leadership, for they can rarely count on a wisdom grown with age

So, still cold and harsh, but not evil.
Give their pantheon some good sides to balance their evil sides, making them Neutral Uncarring at best.
Give the orc some skill at something other than bashing stuff. I'm partial to animal husbandry, but that could be anything: smithing, basket weaving, baking wedding cakes.
Give them factions with various agenda and perspectives, not only ''I smash in the name of Gurmsh'' ''well I squish in the name of Yurtus!'' ''I do prefer breaking bones for Illneval, myself).

Tales and Chronicles said:
So, still cold and harsh, but not evil.
Click to expand...

I don't think they should be cold. Passionate, but not compassionate. Quick to anger, sure, but also quick to laugh. Immensely practical. No-nonsense. Not sentimental. Not wishy-washy. Like it or lump it.

FitzTheRuke said:
I don't think they should be cold. Passionate, but not compassionate. Quick to anger, sure, but also quick to laugh. Immensely practical. No-nonsense. Not sentimental. Not wishy-washy. Like it or lump it.
Click to expand... 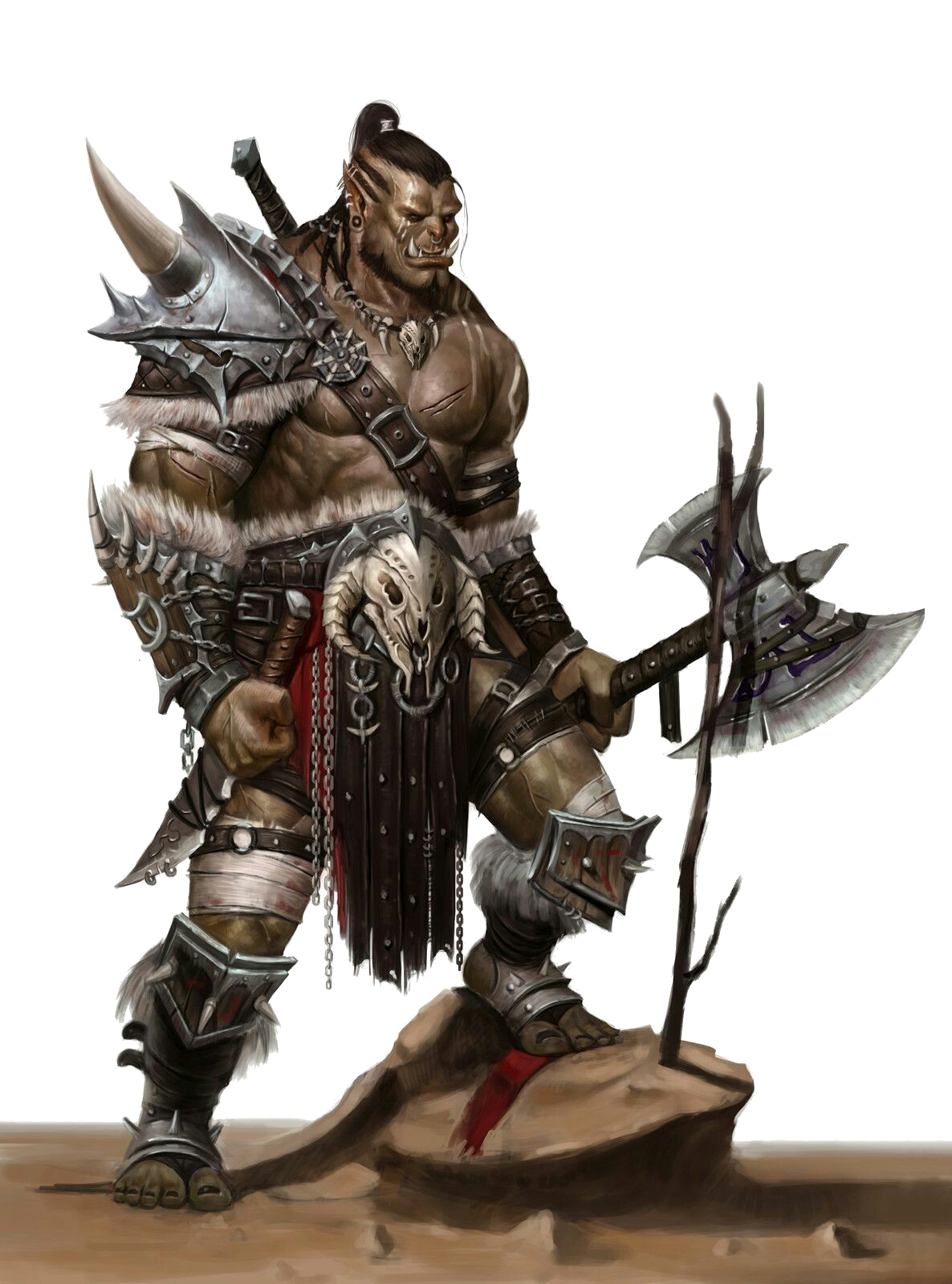 Minus the raiding and plundering, that'd probably make them evil?

You can go a lot of directions here.

Firstly, what do you mean by a "good" culture? Culture is usually judged as "good" or "bad" based on their rules (slavery, freedom, oppression etc...) and their relationship to "our" culture. Interestingly, we can usually tolerate a lot of bad rules as long as the culture treats us as friendly, or is of value to us.

So for your "good" orcs you need a society that either champions a lot of things we think of as good OR you could have one as brutal and nasty as you want as long as the main culture needs them for economic or safety reasons.

Interestingly, a culture full of good things would be characterised as "evil" if its goals conflict with the main culture. Who knows, your orcs could already be good? Perhaps everyone has been told that they are "evil, dumb savages" because powerful people want to do something to them, like, I don't know, take their land.

It also depends what you mean by "orcishness". If you take that to mean "primal". Then you want either a low technology society, or a strong focus on quality over quantity (more individual master crafters, much less mass production). Or a society with technology/magic so advanced that it aligns with the natural world.

If by orcish you mean warlike, then that is easy - just have their enemies be your cultures enemies too. Perhaps they live between your society and a really dangerous place, like a planar rift. Their existence, and prowess, protects you.

So to sum up, a good orcish culture can look like pretty much anything. We only see them as good or bad based on how they treat us.

The way I would do it is make them all primal-y, not feral, but in tune with nature and spirits and respecting your ancestors, All Druids and Rangers and Priests and Paladins, maybe a smattering of Sorcerers too, they still value strength and have strong beliefs but it’s tempered with a respect for the world around them and a spiritualism, i can also see them partnering with one of the nature-ish species like halflings, gnomes or wood-elves.

It could really be whatever you want it to be. You're defining them as a "good" culture lets you make them however you want.

What would be really interesting (if not impossible) is to make them something unique to real life instead of copying cultures we already know (either historical or not).

Depends how much you want to go into values dissonance. For example, much like the Mandalorians, they could be a warrior race open to anyone who can prove themselves and live according to their cultural values. They would thus be less racist than many other fantasy cultures, which would make our age look on them favorably. Elves look askance at anyone who can't prove elvish ancestors to the third generation (and introduce you to them), humans want you to be at least half-human to fit in, but anyone can be an orc if they can survive for a year and a day and fight in three battles.

We (and I'm going to go with 'Anglophone countries' for 'we' since I'm an American writing in English on a British board) haven't fought a big, existential war in a while, so we tend to look down on the usual values of warrior cultures like ferocity (indeed, the popularity of RPGs set in the preindustrial world may be a way of vicariously expressing that part of ourselves). But you could foreground other values like bravery and fortitude--as Bedrockgames suggests, perhaps paladinish, or mix that with the samurai if you want a different feel. Closeness to nature could be another one they could have that some moderns appreciate--as Vaalingrade says, they could have the best druids. You could also have them fighting something much worse--it's only the Orc Nations at the border of the Abyss that keep demons, dragons, or Cthulhoid monstrosities from overrunning the world.

What we're not going to have (unless you are specifically going counterstereotype, which is an option of course) are bookish or bureaucratic orcs. The orcish stereotype has gone from 'evil' in Tolkien to 'martial non-state societies', I'd say.

If you want to go with 'neutral' rather than 'good', you can look at the way nomadic societies were organized--after all, all the histories are written by state societies. Genghis Khan unified the Silk Road and was quite tolerant religiously--but he killed a lot of Chinese people. The Goths were just trying to stay a step ahead of the Huns when they ran into the Roman Empire, but we all know what happened next. Good? Bad? Well, speaking of gigantic melancholies and mirth, who's your chronicler? I mean, all the propaganda about orcs is obviously made up by effete elves who enslaved them three hundred years ago and greedy humans looking for cheap labor in their cities who are now trying to excuse themselves.
Last edited: Sep 8, 2022

Not a good-aligned society but not an evil one in my setting;

The orcs of my setting put value on passion and toughness (taken from the half-orc brutal crit and resilience traits). Being able to deal with your pain has been useful in the past and now, culturally, they see it as a judge of character. This results in practices that other cultures regard as barbaric like arguments being settled by both parties holding a hot coal and whoever pulls away first is 'in the right' or their theater culture being more like gladiator shows mixed with modern pro-wrestling.
"I care not what you say I have done! If you accuse me stand with me on the coals of the bonfire and accuse me!"
The goal is to present a culture that is functional in-universe but still foreign from any my players would have experienced.