Silverymoon has a bit of everything, but does not have overwhelming amounts of lore that you need to dig through. 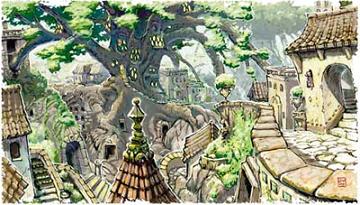 Silverymoon was the prime signatory state of the Confederation of the Silver Marches and therefore, viewed by many as the capital. It was ruled for centuries by High Lady Alustriel Silverhand, a powerful wizard and one of the Seven Sisterssome of the most powerful individuals on Faerûnand also a...


That'd make for a great start!
Really get to know all the NPCs, areas, etc etc etc
PCs return from an adventure & discover that while they were out someone bought the old House out on Gryphon Hill.
Soon Vistani start trucking in shipments of weird equipment.
Then they meet that nice young Alchemist over dinner at the Weathermay estate....

And before long the poo really hits the fan.

Supporter
My two favourites would be...

Sandpoint from Rise of the Runelords. A great starting point. Big but not too big. Lots going on in, under and around. NPCs get brougbt back in a fair bit across the series. I repurposed it as First Tower in Eberron and it works well.

Second favourite is Dagger Dale from Doom of Daggerdale and the Randal Morn series in the early AD&D forgotten realms. A town under occupation by the Zhentarim with a chance to turn it around. Lots of interesting stuff in the locale and a good history.

I think my favorite start point is The Downs, the small farming community on the edge of The Olde Wood, from module N2 The Forest Oracle.
Or rather a small inn (one of the encounter areas) a ways down the road....

Why? Because even though N2 is a complete trainwreck of awful writing (really, it'll cause you some psychic damage) & seemingly non-sensical encounters, and an insanely dangerous wandering monster chart, it's really a nearly blank slate. It's a bundle of 1/2baked, mostly one off encounters wrapped in a nice generic wilderness map with a fairly straight forward plot leading you to/through them.

The "town" itself? Isn't detailed at all beyond a couple of very vague NPCs.
The set encounters? There's enough of them to provide a good # of weeks worth of play - once you re-write & expand them a bit....
As such it can be constantly molded & tailored & re-aranged & detailed as I desire and still keep the same plot.

In the 80 & early 90s I used N2, or parts of it, pretty much straight up. Just like I used Hommlett, The Keep on the Borderlands, Saltmarsh, etc.
But 2006 - present? A total of 6 of my campaigns have launched out The Downs. 3x x1, PF x1, and 4 for 5e. All 4 of the 5e campaigns were started from that heavily re-written inn encounter (ok, technically all 4 launched from the same evening at that inn....)
I've invested a fair amount of effort in re-writing/expanding/detailing The Downs, the surrounding areas/encounters, & the NPCs.

I've used a few small towns of my own creation at times to start a campaign, but my favorite was always the City of Greyhawk.... so much stuff there....

Small town- I would 2nd Daggerford and Phandalin. There is a ton of them and they are small enough to be manageable. If you have 4e, than Fallcreast is good as well and in the back of the DMG

If you need catacombs and sewers and such, then you need more like Waterdeep.

aco175 said:
Small town- I would 2nd Daggerford and Phandalin. There is a ton of them and they are small enough to be manageable. If you have 4e, than Fallcreast is good as well and in the back of the DMG

If you need catacombs and sewers and such, then you need more like Waterdeep.
Click to expand...

I once put a gate into Undermoutain on the toilet seat of the outhouse behind the PCs house in dock ward. They were so intrigued that when they used it it made no sound so the wizard sent his owl familiar down it. Needless to say it was never seen again.

Parnast. Visiting the statue of Wallace is always great (and to make sure no one dispelled the flesh to stone).

Way back when it was Restenford in the L1 The Secret of Bonehill. I currently don't have a favourite town but Phandalin is good.

When you combine the two kits, you get a real nice sandbox campaign that your PCs can use to go from levels 1 through 6 (maybe even 7 if you run "Sacrifice of Innocence" and go a little heavy with the random encounters). Plus, at the end, you can use Tresandar as the home base for your party, using profits from the mine to restore the manor.

It has the advantage of being close to a port like Neverwinter, meaning that you can get your party to Waterdeep or Baldur's Gate using ship travel (with nautical encounters - natch!) and there are enough other sites in the area to throw in some one-shots (White Plume Mountain and the Sinister Secret of Saltmarsh).

Couple that with the fact that Phandalin is still frontier-ish enough, you can control what the party does and doesn't have access to. Want to spend all your loot on plate mail? Too bad. Phandalin is a mining town. It doesn't have or need an armorer. Go schlep up to Neverwinter and have it made (and spend several weeks there while your armor is being crafted).

The party won't be underpowered but they won't be overpowered either. And there's plenty of fun stuff that a crafty party can get their mitts on.

Restenford from L1, The Secret of Bone Hill.

A great town with cool NPCs, multiple inns, and a little mini-dungeon in it, and a tight small wilderness area map around it, with multiple plausible locations for site-based adventures and a couple of dungeons. Like Bone Hill itself- super easy to swap in most any dungeon you want. I've been using Dyson's Delve for the old school game I've been running in this setting for the last eight months.

The only thing that would really make it better would be if he had ever given us a general wilderness map of the whole island. I'd pay good money for that right now, to expand my current game.
Last edited: Nov 24, 2020

Another vote for Saltmarsh. I modified my own map of it for my own campaign (based on someone else's customized map I found online).

Waterdeep and Hommlet. Waterdeep offers such a vast tapestry of lore and adventure hooks. The Village of Hommlet is perhaps my platonic ideal of a 1e adventure and locale. It's tightly-focused, but still has mysteries that a DM can expand on.

Red Larch from Princes of the Apocalypse. I’ve used the “Trouble in Red Larch” starting adventure to kickstart several campaigns now. I love it!

Venetian-style port perched on the edge of civilization, bringing in all sorts of trade and travelers from exotic places like the Isle of Dread, with numerous ruins to be explored and complex politics. Came with good maps, districts, flavorful NPCs, yet oddly placed because the campaign was about quickly leaving the area and taking to the sea.

I like the fact that I see some use small and others use large towns as starting points. The main adventures I've written deal more with areas, and sometimes the towns are smaller (think village) to large cities. But I do love a great city layout with the main attractions in written form. That's how I generally start the process.

Scott Christian said:
I like the fact that I see some use small and others use large towns as starting points. The main adventures I've written deal more with areas, and sometimes the towns are smaller (think village) to large cities. But I do love a great city layout with the main attractions in written form. That's how I generally start the process.
Click to expand...

I think the majority of DMs like to start small and expand out unless they are extremely familiar with a larger city or area and their players are as well. I know that I've started campaigns in Waterdeep with newer groups of players and even then I started in a small section of the city and gradually introduced more as we went along so that games didn't feel like one big info dump on the players and beat them over the head.

one of the more obscure starting towns is Dagger Rock, from Dungeon #4, "Trouble at Grog's". It's nicely fleshed out, with some well described and interesting NPCs, a local mystery to solve, and a hidden treasure that no one knows about.

I think using a big city as a start works nice because you can focus on neighbourhoods and expand outwards. The politics of small gangs vying for power, crooked guards, local politics. Even if there are powerful NPCs in the city, they aren't likely to have time to deal with or notice the squabbles of the people in poorer or smaller neighbourhoods. Mix that with the occasional venture out to a nearby mine/ruin/place of note.

Really, you can run a whole campaign in a big city.