After a rather lengthy hiatus, we're delighted to venture back into the gaming magazines of old for our regularly scheduled White Dwarf Retrospective. Issue no. 5 begins with a few delightful ads—a ¼ page for Dungeons & Starships, another ¼ page for Warriors of the Lost Continent minis, and a ½ page for fantasy t-shirts made by Greenwood & Ball Ltd, selling shirts featuring art by Cliff Sanderson and Al Charles. 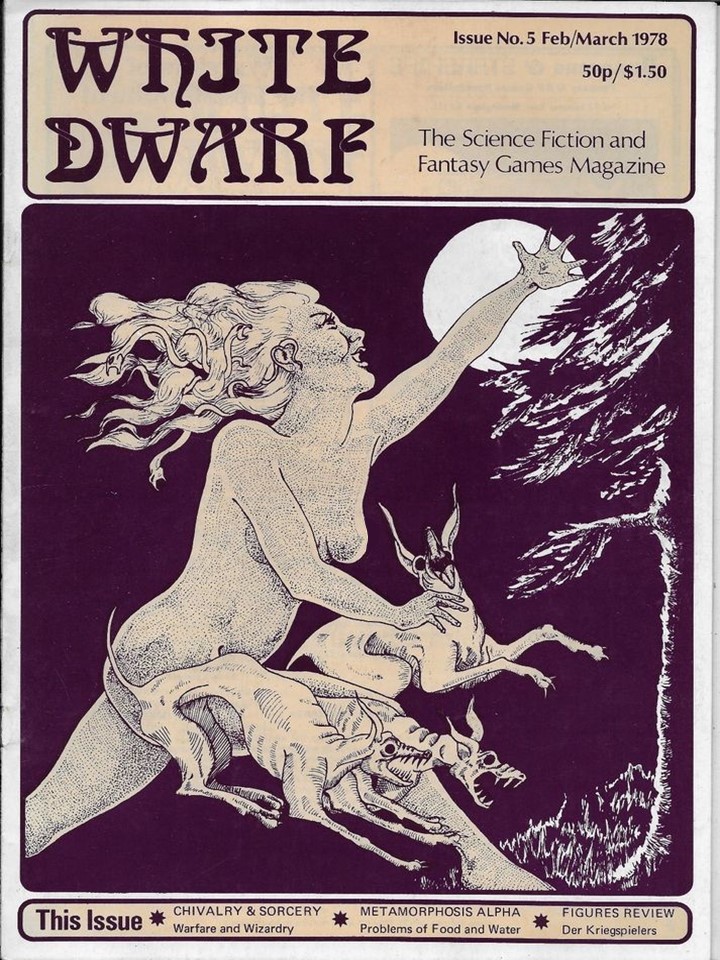 On the cover: An Erinyes (or perhaps a Gorgon) runs with a pack of hellhounds into the darkest night.​
This month’s letter from the editor discusses the limitations of copyright law as it applies to wargaming, with special mention of Star Wars and The Hobbit/Lord of the Rings licenses. Ian Livingstone reports on the discontinuation of TSR’s Battle of the Five Armies, laments the loss of a line of figures from the Mythical Earth range, and wonders how long it will be before fantasy and sci-fi licenses disappear from role-playing/wargaming altogether.

This issue’s first feature is Chivalry & Sorcery by EN World columnist Lew Pulsipher. Chivalry & Sorcery—a combination RPG and war game—was intended as “an all-encompassing campaign game in which dungeon and wilderness adventures were just a small part of the action.” The game can be played in a variety of ways—campaign, miniature-based warfare only, and fantasy role playing with or without the minis, and tournaments. Separating itself from D&D, C&S focuses more on high adventure and nobility than exploring dungeons—ideas that would later find themselves incorporated into more modern version of D&D a few decades later.

Next up is a feature on my favorite thing, miniatures. Spotlighting a line of 25mm minis from Der Kriegspieler’s Fantastiques are akin to Middle Earth miniatures. This review from John Norris discusses the different types of figures, laments the lack of different types of humans, and comments on their rather mixed quality. Most of the smaller figures are fine, but many of the large ones are poor.

Next up, Don Turnbull takes us through some of D&D’s most malign monsters as they apply to his MonsterMark system. The next article covers rules recommendations for making a campaign run more smoothly, with a focus on maintaining more control over what DM’s allow players to do and accomplish through the game.

There are only a handful of reviews in this month’s “Open Box” section, covering a few D&D books from Little Soldier (The Books of Monsters, Demons, & Sorcery respectively), Chaosium’s All the World’s Monsters (a 110-page D&D play aid featuring plenty of new monsters), and Fantasy Games Unlimited’s War of the Ring (a Lord of the Rings game based on the classic Diplomacy). Most of them receive mixed reviews, trending toward positive.

Next, Ian Livingstone recaps the events of Games Day III with a list of the challenges and a few pictures from the event. Directly following the recap is an article about EN World columnist Jim Ward's Metamorphosis Alpha, focusing on searching for food among the strange plants and creatures around the starship on which the game takes place. Watch out for the giant, evil plants! In this month’s News, we learn about some new games microgames, a new Star Wars game, and the release of some D&D miniatures.

On the next page, we’re introduced to a cool comic entitled Kalgar. In the single page comic, we’re introduced to the hero and he is given a battle. Stay tuned for the next issue where we may actually get to see it! This month’s Treasure Chest has some new items for D&D—a +3 Rainbow Sword, Water of Enchantment, and Water of Beguilement. On the same page, Brian Asbury’s article on “The Asbury System” goes over his idea of “the perfect experience point system for D&D.” This is basically awarding players for taking down monsters without killing them and awarding them for tasks they accomplish, similar to the way D&D experience works in modern editions. Cool.

Finishing up this issue, there’s a printed letter taking issue with players rolling their own attack and saving throw dice and a correction for Don Turnbull’s Balrog calculation from the previous issue. There’s a small selection of classifieds in this issue, predominantly seeking players for various D&D clubs.

Wrapping things up, there’s the traditional Games Workshop single page catalogue and an illustration of a menacing, winged sorcerer to see readers off. See you next issue!

Read the other parts of this series:

Good stuff, that was the month and year I first joined the hobby. Though I didn't start picking up White Dwarf's until a couple years later, only Dragon magazine at first.. After that I was all about White Dwarf until it became just a house magazine for Warhammer. Also I snagged every Spacer Gamer, Different Worlds, Pegasus, Judges Guild Journal, Pyramid etc that I could find as well. There was a period where I was snagging every game magazine that I saw or subscribed to once I found them.

Since nobody else has said it, I guess I will..."ooh, free boobs."

Enjoy these very much.

1978 - when I had been playing Chivalry & Sorcery for a year already, very cool to see this game mentioned here.

pogre said:
Enjoy these very much.

Alas, the switch to the new bulletin board system broke a lot of our old articles' graphics. I fix them when I find them, so thanks for pointing this out. I updated all four previous articles.