By this issue, White Dwarf seems to have hit its stride. The first page of this issue greets readers with a full page of ads for various fantasy miniatures. What follows is a brief editor’s note from Ian Livingstone and the table of contents. This month’s topics cover the announcement of White Dwarf’s one-year anniversary, a statement regarding Games Workshop’s new headquarters, a small price increase, and the celebration of justified text in the magazine. 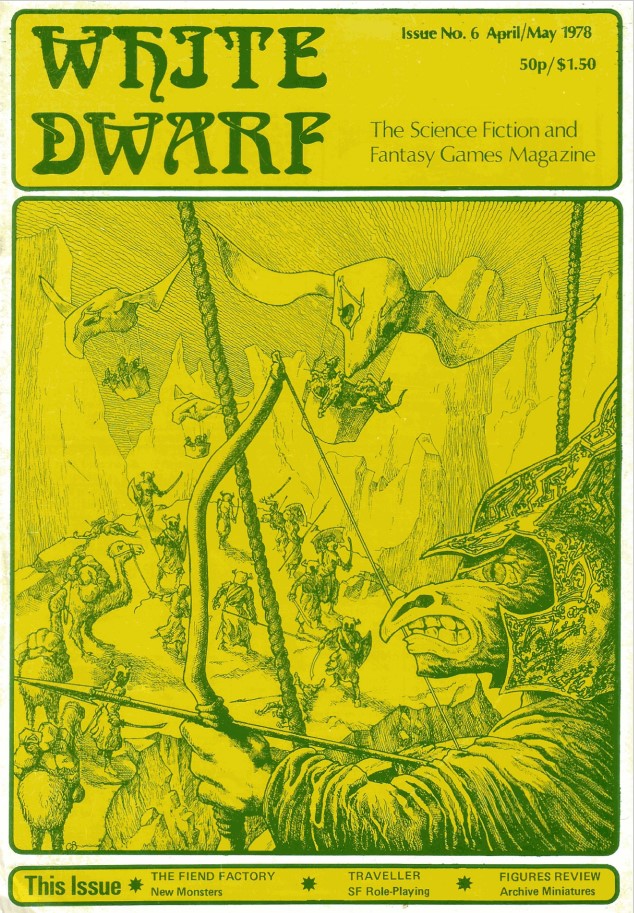 [Editor's Note: David's (Nostalgia Ward) has been away from this column due to a chronic illness. We're glad to see him back and hope to share more of his columns in 2022!]

An epic battle between a caravan of monsters and an airborne menace unfolds in all its visceral glory.


Within the Pages of the Old Tome​

The first article is Combat and Armour Class by Robert Musson. In the essay, Musson laments the lack of realism in-game combat in D&D—especially about armor class—while offering alternatives for calculating AC and creating a more consistent approach to combat situations within the game. It ends with the idea that these changes will slightly weaken characters and make them think twice before rushing into a battle haphazardly. Directly following Musson’s article comes The Fiend Factory, a new feature to this issue, edited by Don Turnbull.

In this article, readers meet:
Each monster represents a creative, fun addition to role-playing games, both then and now. It’s pretty cool, honestly.

Next up is Archive Miniatures by John Norris, reviewing gaming miniatures from the Archive Miniatures company. Middle Earth, D&D, flying monsters, and wizards are all represented to mostly positive reviews. After the miniature reviews, it’s time for the news. The biggest story for this issue: the Monster Manual was put on sale for $9.95, with Games Workshop picking up the license to publish it in softcover! Neat! Lew Pulsipher’s A Place in the Wilderness follows, offering a D&D scenario set-up based on Jack Vance’s The Dragon Masters.

This month’s Open Box covers some exciting releases. The Endless Dungeon and Dungeon Decor are early versions of dungeon tiles, allowing game referees to design unique dungeons or occasionally build free-standing dungeons. A hexagon map book and a wilderness fantasy hex map received winning reviews as well. Finally, the game Labyrnthine—an adventure through a wizard’s stronghold—was received poorly and considered “not worth the money” by our reviewer Don Turnbull.

This month’s letters are a mixed bag. One person writes in asking for help with Don Turnball’s Monster Mark system, while a few other letters come from White Dwarf contributors themselves. Lewis Pulsipher offers a five-step

A spectacular battle plays out in the panels of David Lloyd’s Kalgar comic, which is always lots of fun. This month’s Treasure Chest is pretty short, containing only a few items.

At only 24 pages long, this is one of the shorter issues of White Dwarf’s early run. The magazine hits its stride and narrows its focus as it heads into the next issue.
Click to expand...

I suppose most reading this already know, but just in case- the author of the Fiend Factory article mention above, Don Turnbull, wrote the Sinister Secret of Saltmarsh and edited Fiend Folio. Definitely an accomplished fellow

Even back then, 3rd party companies put out more inventive monsters than the owners of DnD.....

Oh, lord, the origin of the nilbog. If you ever want to make your hack 'n slashers crazy, throw nilbogs at them.

Zaukrie said:
Even back then, 3rd party companies put out more inventive monsters than the owners of DnD.....
Click to expand...

TSR covered all the basic monsters you really needed in the MM. If you were publishing more monsters, they needed to be either setting specific, niche, or just really different. Later MMs and the FF were a bit repetitive (more humanoids...), filled in niches that were missed, or were different (especially the FF).

It's interesting seeing what White Dwarf Magazine was like before it got turned into, and only, a Warhammer magazine.

R_Chance said:
TSR covered all the basic monsters you really needed in the MM. If you were publishing more monsters, they needed to be either setting specific, niche, or just really different. Later MMs and the FF were a bit repetitive (more humanoids...), filled in niches that were missed, or were different (especially the FF).
Click to expand...