I've been a Ghostbusters fan for as long as I can remember, watching the film countless times. As much as I enjoyed it, the Real Ghostbusters cartoon expanded the universe in more interesting ways, supplanting the movie in my personal fandom. The Ghostbusters RPG took the series a step further by allowing fans to role-play as the Ghostbusters themselves, busting ghosts in a series of hilarious adventures through two editions of the game. 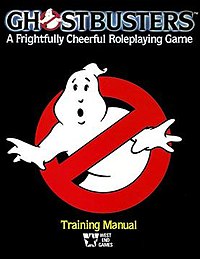 Chaosium, a name you may recognize as the publisher of the popular Call of Cthulhu RPG, were responsible for designing this extension of the Ghostbusters franchise. West End Games worked on development of the game and the final product, releasing the first edition of the game, Ghostbusters: A Frightfully Cheerful Role-Playing Game in 1986.

This past Halloween, I had the opportunity to play the game for the first time, despite possessing a vague familiarity with it through the years. Like many other licensed titles, the game offers the ability for players to take the mantle of the Ghostbusters or create their own custom paranormal investigator/eliminator. I thoroughly enjoyed this angle to character creation simply because, as a kid, always wanted to be a ghostbuster.

The game comes with a GM's book, a player's guide, equipment cards, four reference sheets, five regular dice and a ghost die. My copy was missing the ghost die, so I used one of the dice from the Cryptozoic Ghostbusters game—the die is exactly the same, being inspired by the RPG.

The first reference sheet provides a quick reference on how to get the game started, while the other three sheets provide examples of gameplay, maps and ghost classification. The use of official forms, permits, employee IDs and a welcome letter on these sheets is not only hilarious, but helps cement the "you've been hired as a ghostbuster" angle. Never mind the business license having the word "temporary" stamped prominently across the top.

The game makes one feel like a new ghostbusting recruit. The training manual resembles a standard employee handbook one would expect to receive upon being hired anywhere. The design includes numerous illustrations of the GB in their natural habitat, along with a few screen caps from the film.

The explanation of the core abilities—cool, moves, brains and muscle make for a simple game anyone can pick up and play quickly. New ghostbusters are allotted twelve points to assign amongst the traits, with a limit of five being assigned to a single trait. This number is how many dice the player rolls when attempting to succeed at a task. Each trait has associated talents, akin to skills in other RPGs. If a player has a talent applicable to whatever it is he/she may be attempting to do, they gain an additional die to roll.

The mechanics are simple: some jobs are assigned a difficulty number, ranging from five to thirty (or higher), which the player must exceed with their roll. Traits and talents allow for stacking dice in certain types of activities. The addition of the Ghost Die throws a wrench in the works, making things interesting. Each time a player rolls dice, the Ghost Die is rolled along with it. If a number comes up, the number is added to the total roll. If a ghost pops up, however, something terrible is going to befall that character soon. The entire game is based on this system, including movement and combat. Each player gets an ID card to keep track of their stats and brownie points throughout the adventure. The concept of brownie points is hilarious and encourages role-playing among the group, especially with some of the ideas the manual presents.

Also included is a book for the game master—ahem, the Ghost Master—which includes several adventures, along with tips on how to run the game and a rather large cast of characters ("a cast of dozens") for use in the game. The Ghostbusters Operations Manual reads like one, but a bit more on the entertaining side. Structurally, it feels a bit disjointed, as it places GM tips, NPCs, and stat blocks between individual adventures. While I would've liked each topic having a dedicated section, this is a minor gripe in the grand scheme of the game.

The Operations Manual provides rules for car chases, starting a ghostbusting franchise, going to court and interdimensional incidents. It explains how to run a campaign fighting Gozer from the film, among other campaign ideas. There are yuppie vampires, a were-dog, a groovy cult, Hollywood hijinks and Scottish ghosts. The game's monster index, Ghostology, helps define what sort of spectral baddies players may face in any game session.

The Operations Manual is a superbly entertaining read. My group laughed so much reading both manuals, it's a miracle we ever got the game session out of the firehouse! We finally got our proton packs together and played through one of the adventures, The Couch Potato. The ghost of a guy who enjoyed watching television incessantly haunts 666666 Flatbush Ave. It was up to us to stop him. We did, but not before devolving into goofing around and making jokes from the films and cartoons. Playing this scenario was a blast.

Most of the writing is strong, maintaining the levity and irreverence of the film, while expanding the GB universe in a meaningful way. Timothy Meehan's artwork is excellent, mostly pencil-drawings, featuring a myriad of ghosts, equipment and the characters from the film. The maps, by Martin Wixted, are fully developed floor plans. The humor gives the game an edge. There's just enough, in all the right places, to make this a fun and engaging for everyone.

After playing for a few hours, I highly recommend the Ghostbusters RPG for two reasons: fun and nostalgia. The game offers the ability for players of a certain age to relive some aspects of their childhood while also being a fun way to spend an afternoon/evening. Who are you going to call?

N
David J. Buck
When he isn’t learning to play or writing about RPGs, David J. Buck can be found at Tedium: the Dull Side of the Internet, Nerdvana Media, Patreon, and Twitter.

Staff member
I adore this game. I have it on my desk right now. First ever dice pool game, and the precursor to WEG’s d6 system. Of course, the Ghost Die mechanic is fundamentally flawed - the more dice you have, the more likely you’ll get a Ghost.

Morrus said:
I adore this game. I have it on my desk right now. First ever dice pool game, and the precursor to WEG’s d6 system. Of course, the Ghost Die mechanic is fundamentally flawed - the more dice you have, the more likely you’ll get a Ghost.
Click to expand...

The way I understand it, there's only one Ghost Die, which is rolled along with the rest of the regular non-ghost dice. So you're always at a 1 in 6 chance of rolling a ghost, no matter how many other dice there are.

thorgrit said:
The way I understand it, there's only one Ghost Die, which is rolled along with the rest of the regular non-ghost dice. So you're always at a 1 in 6 chance of rolling a ghost, no matter how many other dice there are.
Click to expand...

I tried a game with my kids last year using the Ghostbusters 2 rules. Seemed fun enough.

What were the Ghostbusters 2 rules? I’m only familiar with the original.

Yep, there was only one Ghost die, although other games that followed (notably White Wolf's Storyteller system) had "rule of 1" mechanisms that actually did increase the likelihood of botching with bigger dice pools (later editions fixed it).

Incidentally, The Nerdy Show actually has all the rules still available and have helped to do some restoration of the game (I had a very old box set with missing bits that they helped replace). They can be found here: https://nerdyshow.com/gbrpg/howtoplay/

Ghostbusters RPG is very much a classic game, regardless of your experience with the movies incidentally. It's very beginner friendly. It was designed by the same crew that made Call of Cthulhu. I don't think Ghostbusters 2, or Ghostbusters International, actually changed anything mechanically. They just refined, reformatted and expanded the game somewhat - a bit like Marvel Supers or Star Wars rpg did.

That nerdy show page is a great resource! I still love the idea of the Ghost Die.

Not only is it the first die pool game, but members of this team would go on to create the Star Wars d6 game, and later to go onto other companies to make Shadowrun and then Vampire the Masquerade (which of course lead to WtA, MtA, WtO, and CtD and much, much later the nWoD/CoD).

I played this game once, at a convention. (Before any sequels or other expansions of the universe.)
We had a really hard time staying on track and accomplishing anything plot-wise because of all the jokes and one-liners and movie quotes. But it was a lot of fun.

This is the boxed set I have. I had to make my own ghost die.

Achan hiArusa said:
Not only is it the first die pool game, but members of this team would go on to create the Star Wars d6 game, and later to go onto other companies to make Shadowrun and then Vampire the Masquerade (which of course lead to WtA, MtA, WtO, and CtD and much, much later the nWoD/CoD).
Click to expand...

Sandy Peterson, Lynn Willis and Greg Stafford, of Chaosium, designed the Ghostbusters RPG for West End Games. The design was influential, but these people were not directly involved with the design of Shadowrun or Vampire: The Masquerade at all. Star Wars D6 had some common developers and editors (eg Greg Costikyan, Ken Rolsten, etc), but the Chaosium guys were not directly involved again.

This was one of my all time favorite RPGs when I was younger! I wish I still had it, but this write up was a great read

This game is awesome, its system is very light, fast and fun!

I prefer to stick to the original rules of the boxes set and for me it works best for doing short story arcs of 2 or 3 sessions. Occasional plan, not long campaigns.

The idea of using the brownie points as both xp and hit points is simply brilliant!

You know, I have this game but I never played it. I might unload my copy.

Of all the RPGs I didn’t pick up back in the day, this is probably the one I regret not doing so the most.

LordNightwinter said:
You know, I have this game but I never played it. I might unload my copy.
Click to expand...

Let's talk. I would be interested in acquiring a new copy. Mine is pretty torn up. As I mentioned in the piece, I had to improvise for the ghost die. I could always use new ID cards and Equipment cards. PM me if you decide to part with it.

Nostalgia Ward said:
Let's talk. I would be interested in acquiring a new copy. Mine is pretty torn up. As I mentioned in the piece, I had to improvise for the ghost die. I could always use new ID cards and Equipment cards. PM me if you decide to part with it.
Click to expand...

Unfortunately for me the copy I picked up was used and it wasn't treated with collector's care. There is dishing on the cover and one side of the box is torn. The cards aren't in the greatest shape but they all seem to be there. Plus I have the GM screen and adventure and Hot Rod of the Gods and the Pumpkin Panic one for GB International. EDIT but I do have the Dice for it, including the Ghost Die.
Last edited by a moderator: Nov 28, 2017