White Wolf has announced that World of Darkness creator Mark Rein*Hagen is working on Vampire 5th Edition. Mark Rein*Hegen created the World of Darkness in 1991, and co-wrote Vampire: The Masquerade's first edition in that same year. Vampire 5th Edition has been in development for a while (an "alpha playtest" was released in June), and the lead designer on the game is Kenneth Hite. 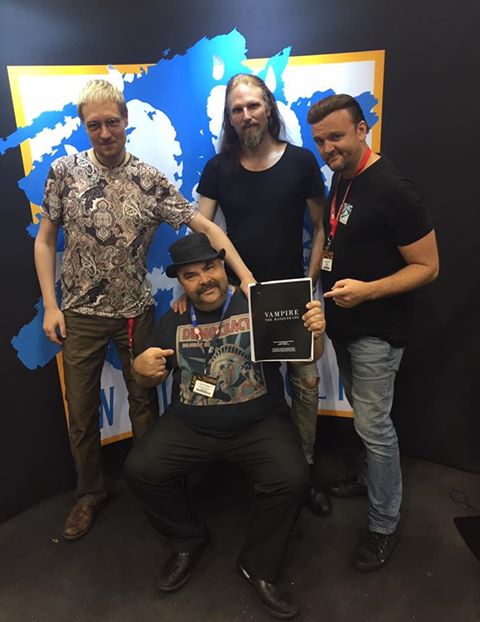 I just realized, I've never seen a picture of any of the original WW folks. Can anyone label the above photo?

It's not the "original", but a part of the current WW staff. From left to right: Karim Muammar, Martin Ericsson, Shane DeFreest and the sitting one is Mark rein-Hagen.

Hope he can fix the core system the playtest document is just bad.

I, for one am happy he is back. I would note though that he's not really a 'systems' guy, but more of a world builder. His main skill will be making the fantasy world of Vampire culturally and politically relevant to the real world again.

With regards to the system, the playtest packet was clearly a formative thing - I doubt the final product will be the same. The main things for development would be the skill selection, really. The actual core mechanic (difficulty 6; no botches, no rules of 10, etc) was actually quite promising because it's strips out a lot of the convolution in the gameplay back to being 'simple and elegant' (as per the original game's brief). The storyteller system should not be a crunchy system. I also like the fact that if the target is 50/50 for each dice, you can basically use any type of dice in the pools.

Honestly, I'd like the system to go back to the basics of Prince Valiant - which is where they got most of their system ideas from. We don't need to go as far as coin tossing, but having three core stats and a tidy list of skills would be the basis of everything else really.

i really liked his design back in the day, there was another guy who used to work on all the white wolf books, who later did the RPG called Rapture... i cannot for the life of me remember his name, but this is interesting fo sho.

yeah i believe that was it, another - or * name, hahaha

Mercule said:
I just realized, I've never seen a picture of any of the original WW folks. Can anyone label the above photo?
Click to expand...


The original WW folks would also include Lisa Stevens from Paizo, and Stewart Wieck, who passed away this year.

PMárk said:
It's not the "original", but a part of the current WW staff. From left to right: Karim Muammar, Martin Ericsson, Shane DeFreest and the sitting one is Mark rein-Hagen.
Click to expand...

To clarify, I was meaning that I'd never seen any of the original staff, which includes Mark Rein-Hagen, so there's no way I could pick him out of a line-up. Really, including "original" was an attempt at heading off "he's the guy to the right of X" and trying to not say, "Who the heck are all those people?" Seems my phrasing didn't actually create any clarity. Regardless, you gave exactly the info I was looking for.