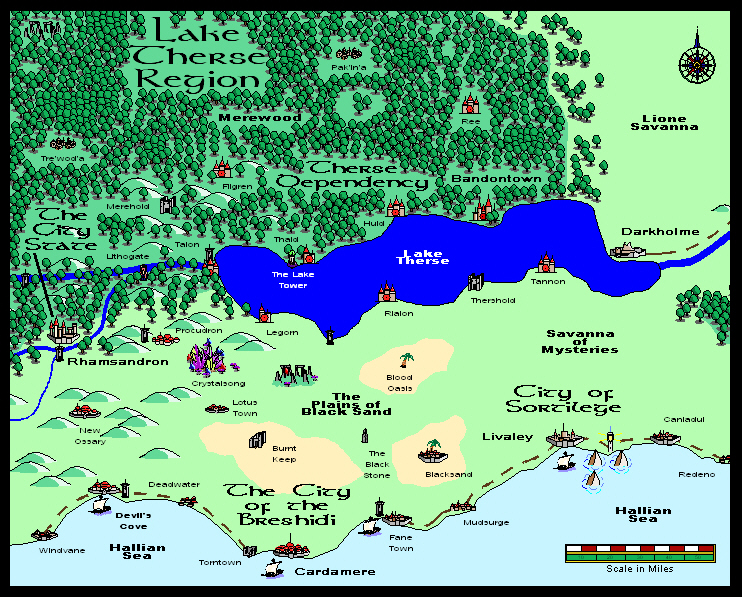 My second attempt to make the freshwater standout less. This time I matched the freshwater color with the sea color. The result is promising, although I think the main green needs to be darker. I'm not sure. 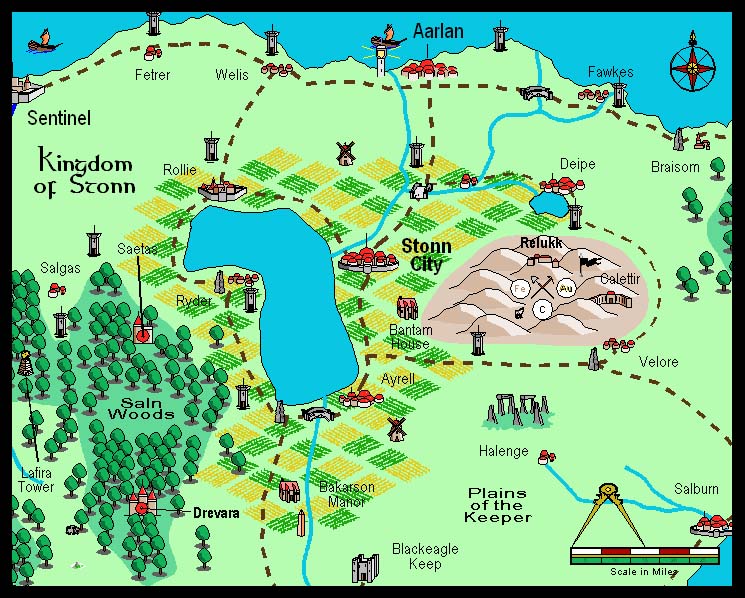 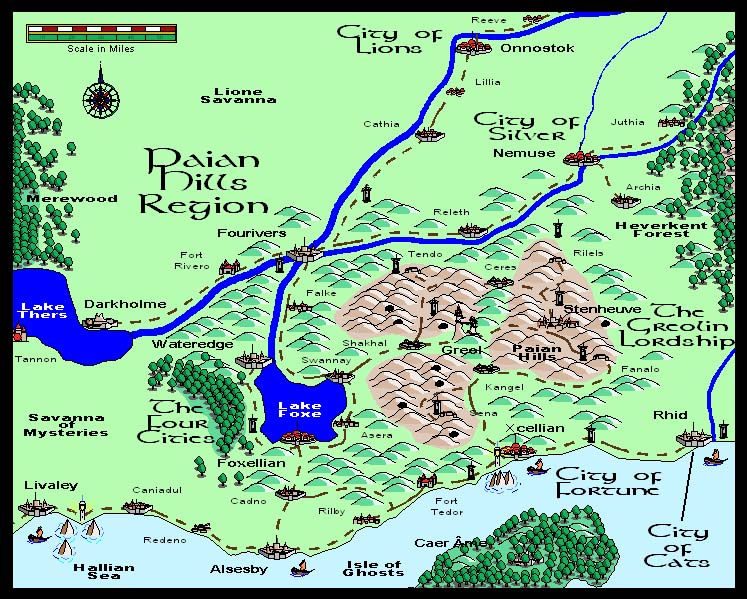 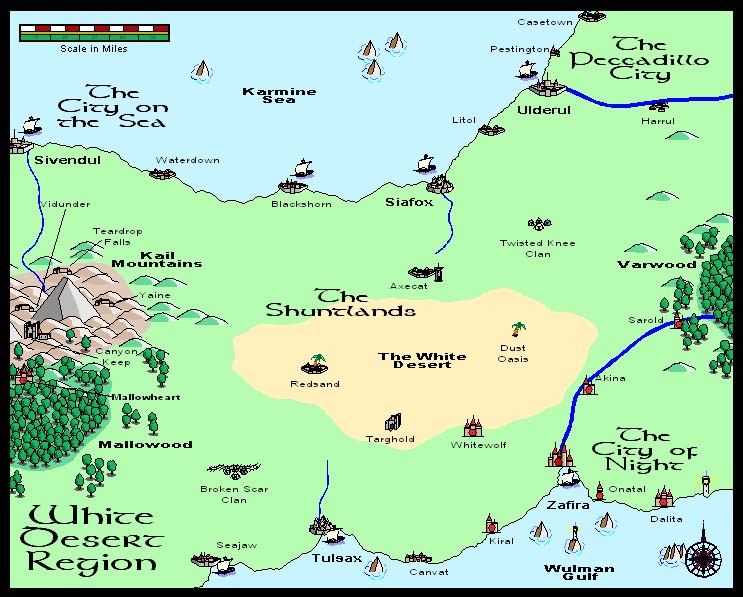 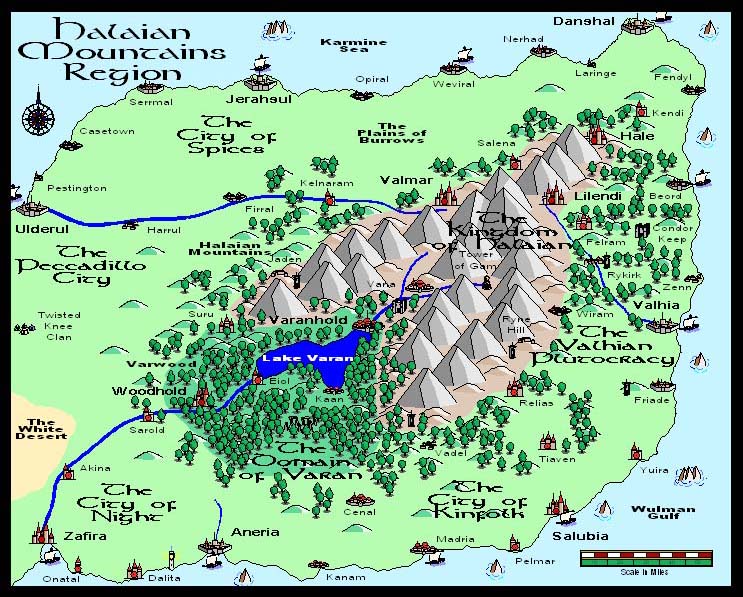 I'm really diggin your maps knightfall! I especially like some of the place names such as Peccadillo City. Such extensively thought out worlds are always fascinating to me. Keep up the great work!

Xyanthon said:
I'm really diggin your maps knightfall! I especially like some of the place names such as Peccadillo City. Such extensively thought out worlds are always fascinating to me. Keep up the great work!
Click to expand...

Thanks, I try to come up with "hooks" for each locale, but it doesn't always work. The Peccadillo City hook, is a new one that I just came up with to match the city's alignment (NE) and location. Being so close to the dictatorship of the City of Siafox has greatly influenced Ulderul.

I had orginally considered calling Ulderul the City of Sin, but that's too much like Frank Miller's Sin City, IMO, and I wanted the city to have a unique outlook towards "indulgence" and fantasy feel. Note that the lands of the Far South aren't dominated by humans. The Paian Hills Region and the Halaian Mountains Region are two areas where this is commonplace.

Note: You can find some political data for various "Lands of Harqual" here. The entries are spread throughout the thread's pages, and only have the most basic of information.

I've been on a hot streak lately, when it comes to mapping out more details of Harqual's southern lands. There are more areas in the southern half of the continent to detail than in the north, right now.

Once most of Harqual is done, I'll begin starting to map out the Fallenlands and Janardun, and maybe even a bit of Triadora. Kanpur will have to waitm for now.

This region, like the Shantil Peninsula Region, is dominated by a forest. Unlike with the other peninsula, this region is named for the forest. The name "Nashee" refers to a legendary race of tall, dark-skinned elves. Nashee is an word in the Barbarian tongue of the Northlands, which has several meanings -- "ancient," "tall," or "greatness."

The forest is also called Rmoahalnn, but only a few scholars in the nearby human lands know this name for the word is rarely spoken outside of the forest's interior. Those elves of legend aren't just legends. They are quite real and call themselves the Rmoahali. (This race is from the d20 system sourceboook known as Frost & Fur: The Explorer's Guide to the Frozen Lands by MonkeyGod Enterprises [p. 36].)

Remember! There are no drow on this campaign world and this race is NOT related to the drow race.

The rmoahali are an ancient race from another era. They lived in the Northlands long before the human barbarian tribes that now dominate the northern lands. Their kind walked the continent before the North God Cronn first appeared out of the mists of The Frozen North. They are ice age elves with powerful psionic abilities. They can stand as tall as twelve feet. They are also isolationists by their very nature. They consider most other races to be "primitives" with little to no culture.

The rmoahali control the Nashee Forest almost in its entirety. They must compete with the dwarves of Mount Vaag, the human settlers of Harlagren, the evil despot of Hoarfrost, and the citizens of Fort Tundra. The Dwarven Holds of Valag have the most information about the Nashee, but they rarely share this information with outsiders. The rmoahali have them at a disadvantage since the Nashee Forest nearly surrounds the entirety of Mount Vaag.

The dwarves have told the leaders of Harlagren to be wary of upsetting the ancient dark-skinned elves. (Valag and Harlagren have a tentative alliance.) Harlagren is a feudal patriarchy that is only slightly older than Fort Tundra. Its citizens migrated north shortly before the events of The Transformation. The city-state isn't much to look at and the rmoahali could destroy it without hardly any difficulty. However, the elves of the Nashee are more worried about a growing evil located in the north.

Hoarfrost is the real threat in this region. It is a city filled with evil intent. Hoarfrost is a feudal monarchy that has become a sore on the land. The City of Wretched Frost simply appeared one night, out of the mists. Most assume it is a Transformation city. What is known is that its vicious, enigmatic king has a thing for slaves and debauchery. The rmoahali do not believe that Hoarfrost is a Transformation city. They believe its people are originally from the Old Sword Imperium, far to the west. The truth is not yet known.

The citizens of Fort Tundra give the forest a wide berth and the barbarian tribes of the Northlands would never willing enter the forest. The tribes fear the legend of the Nashee and only a select few have ever entered the forest and returned. They never speak of what they saw. The ruler of Fort Tundra would love to sign an alliance with the forest's denizens; however, The Tundra Princess has no idea who or what truly lives in the depths of the forest.

her best chance for allies exists within the southern part of the forest where a group of Nashee elves has begun to reach out to several nearby communities including the City-state of Woodend (not shown on this map). The region known as The Trees of the Nashee has always been a hotbed of revolutionary ideas, and the rmoahali who live in the city known as Treetown (also not shown on this map) have become fascinated with humans. They risk exposing all of the elves of the Nashee to the wider world. 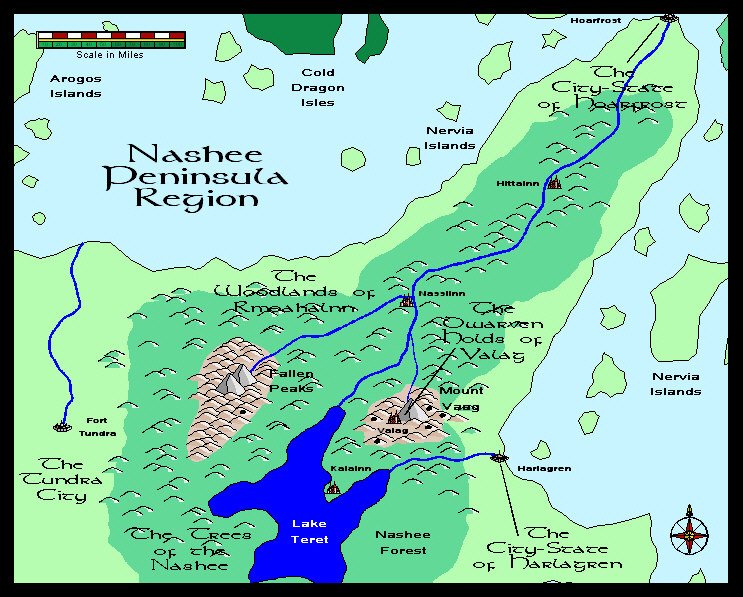 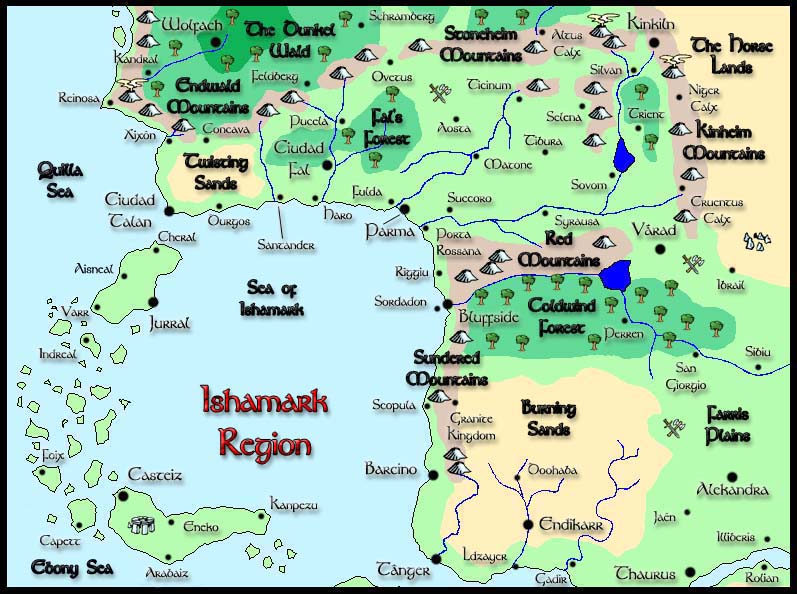 A map for my Shackled City campaign!

Temple of the Cat
In my version of Cauldron, the Greyhawk Deity known as St. Cuthbert is replaced by the North Goddess known as Bast (yes, that Egyptian deity).

I have an important session happening tomorrow and combat is likely going to break out in the Temple of the Cat, thus I've thrown together this CC2 map for tomorrow.

Each square is equal to 5 feet. 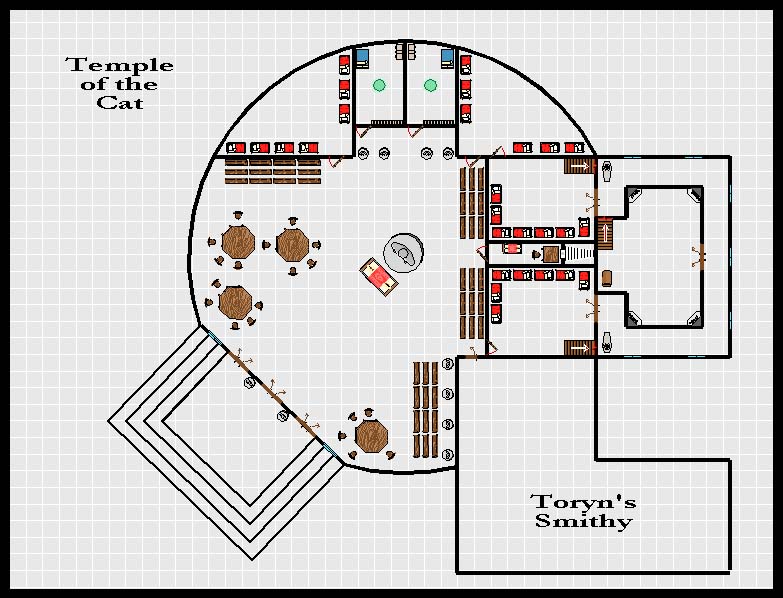 Okay, I've modified the map of Cauldron that was made available online by Paizo for my current World of Kulan campaign set in the Shackled City (see attached image). It shows the various locales in Cauldron based on my campaign. And here is the map's key:

Bumped for my reference.

Thanks for bumping - nice to see some of your work with Campaign Cartographer!

jaerdaph said:
Thanks for bumping - nice to see some of your work with Campaign Cartographer!
Click to expand...

No worries. I haven't been doing any mapping lately, but I'm starting to feel the itch a bit. I'll see where that feeling leads me. If you want to see what I have been up to then check out my Kulan: Lands of Harqual thread in "Plots, Places, and Rogues!". 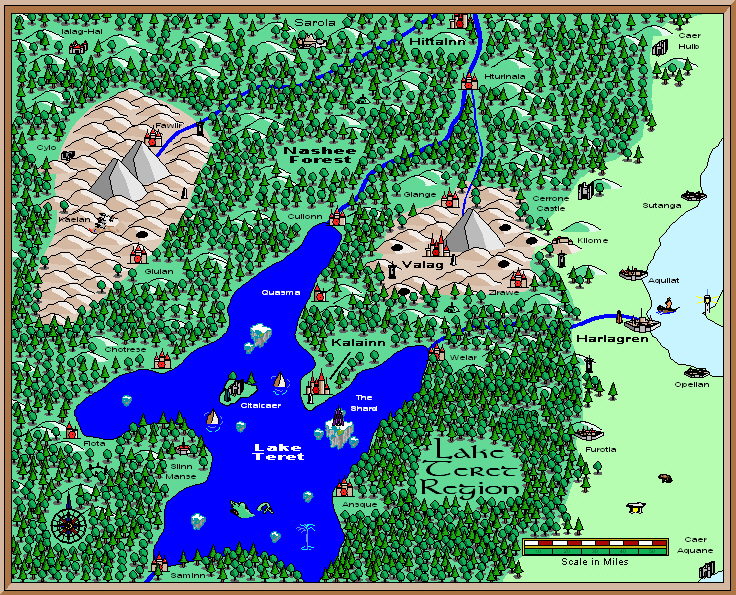 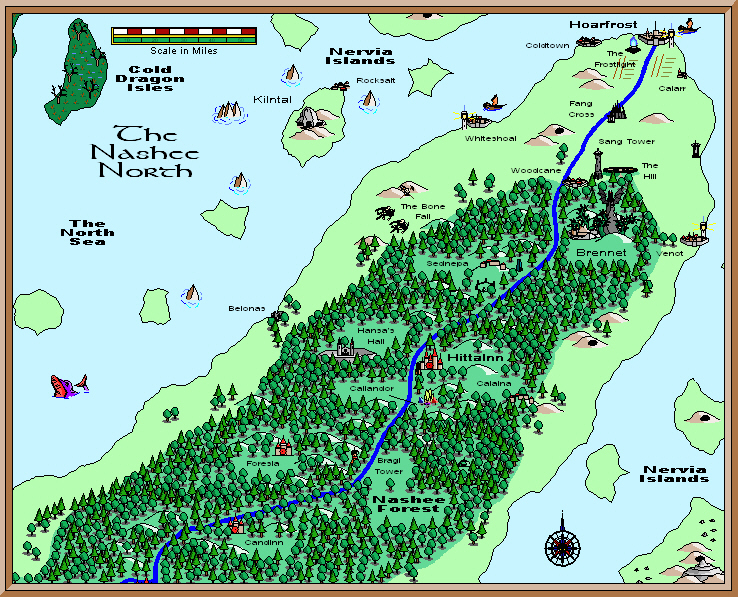