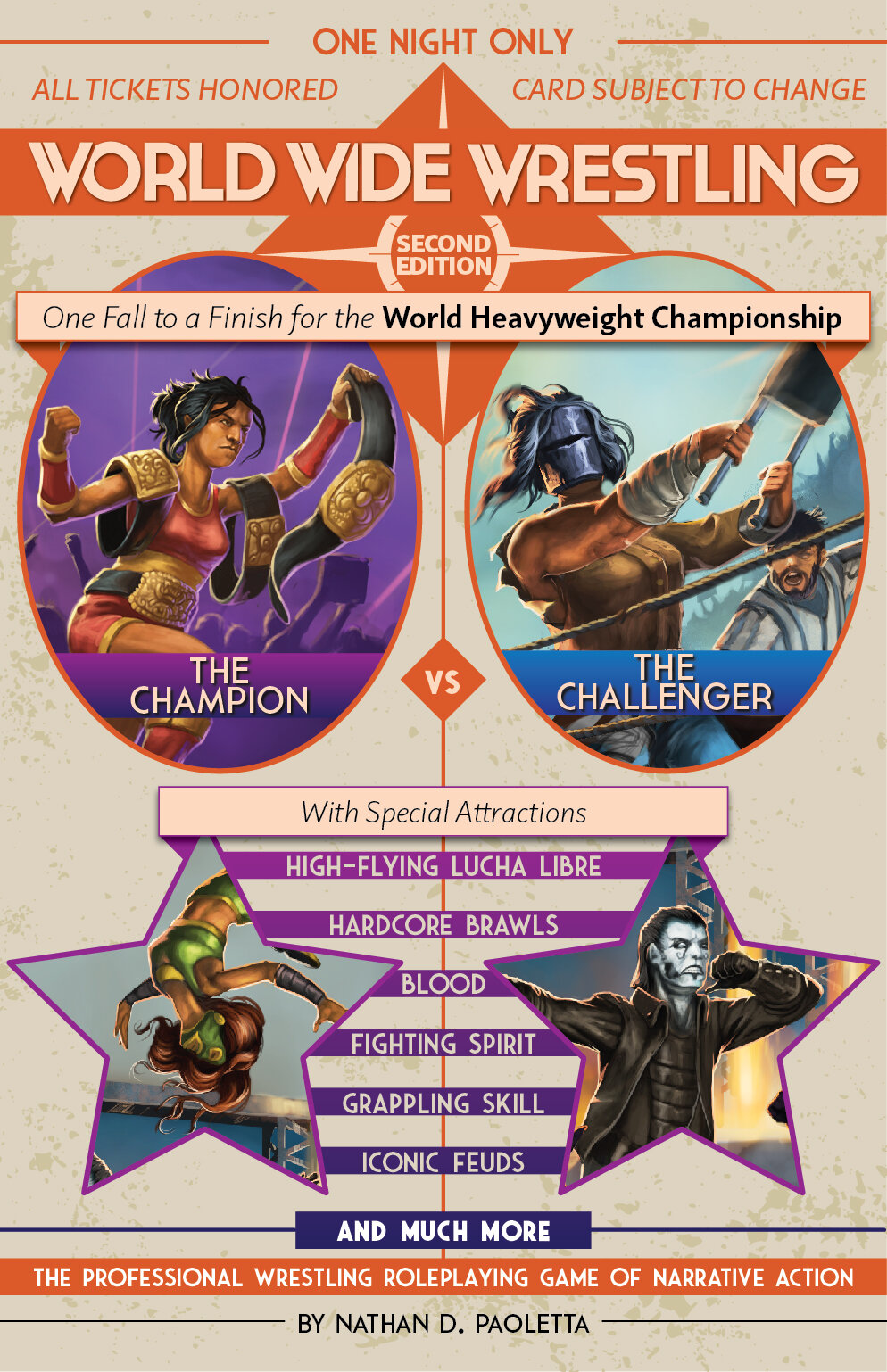 As a professional nerd, I would be hard pressed to choose the nerdiest thing I’ve ever done. One thing that definitely cracks the top five is my time as the head of an e-fed in college. Me and my friends put together a fictional pro wrestling show every week via email. They’d send in the promos you’d expect to see on a show in between matches, tell us what storylines they’d want to act out and then we would run the matches using an obscure bit of software with a UI straight out of a 1980s BBS. If that sounds like fun then I have good news. A new edition of Nathan D. Paoletta’s World Wide Wrestling has just been released and it continues to be my favorite Powered By The Apocalypse game on the market.

Setup for the game follows the usual path for PbtA games. The players choose playbooks based on genre archetypes, players set up relationships between characters, sketch out a world to discover and start playing. What I love about World Wide Wrestling is that it embraces the dual nature of the wrestling world by playing up the athletic drama seen on screen and the interpersonal drama behind the scenes. Pro wrestling plotlines may be staged, but those stories are impacted by real injury, office politics and economic reality.

Success in the game doesn’t mean winning a match; it means putting on a great show. Matches are not blow by blow simulations. When players make the Wrestling Move, the roll reflects how the crowd reacts to a big moment in the match. Does it get the fans standing out of their seats? Does it get a “boring” chant started? These matches are against each other on their face, but watching players figure out how to make each other look good describing a combat sequence is a joy for any GM.

The GM books the finishes for each match but the players still decide if they want those finishes to play out. Players who grow their audience can eventually use their backstage pull to affect the booking of the matches. Changing the outcome can cause hurt feelings, or a crowd revolt or even actual career ending injuries. By focusing on the audience, the game still lets players work as a team even if their characters are supposedly in competition with one another.

The best PbtA games are great genre guides and World Wide Wrestling has some excellent essays that talk about the joys and sorrows of being a pro wrestling fan. The essays also explain the arcane terminology that pro wrestling fans use as well as the differences between things like Mexican Lucha Libre and Japanese puroresu. Much of this material comes from the International Incident supplement from the first edition but it’s very welcome here. I learned a lot even as someone that’s fairly knowledgeable about American pro wrestling.

There’s a lot of new stuff for fans of the original. A few moves have been changed and playbooks combined. Creating the federation everyone is involved in has been given a meaty upgrade. Everyone chooses the elements their federation excels at and the weaknesses that might try to break them down. It highlights the challenges of different levels of pro wrestling. How does the small indie fed doing shows in bingo halls keep the lights on? How does the regional organization with a TV show keep things fresh so they don’t lose viewers? There’s also rules for drama happening on the road that deals with some darker aspects, like drug use or people who think the wrestler is their character. Finally, the rules for specialty matches have also been expanded along with more insightful rules on how to design custom moves to give characters and federations their own feel. Some samples of each have been provided by Kickstarter backers that can be used as pre-generated characters to start lay immediately or as resources for the GM to draw upon for rivals during play.

My experience running World Wide Wrestling has been fantastic. I’ve turned RPG fans into wrestling fans and wrestling fans into RPG fans with this game. The new edition goes deeper into the experience but still remains accessible to anyone with an interest in running a pro wrestling game. No matter who you might think is the best wrestler of all time, World Wide Wrestling will let you tell those stories well while making you think about the strange moments in real life that connect to those tales.

I watched a convention game a few years back - amazing!

News Digest for the Week of May 7