As “Young Jim Ward” I started out in the sales department as the inventory controller. It was my job to order the boxes and parts for the games and especially the D&D box set. That game was selling 100,000 units a month. One of “Young Jim Ward’s” jobs was to make sure the Hong Kong dice came in on time to fill the next batch of 100,000 boxes. 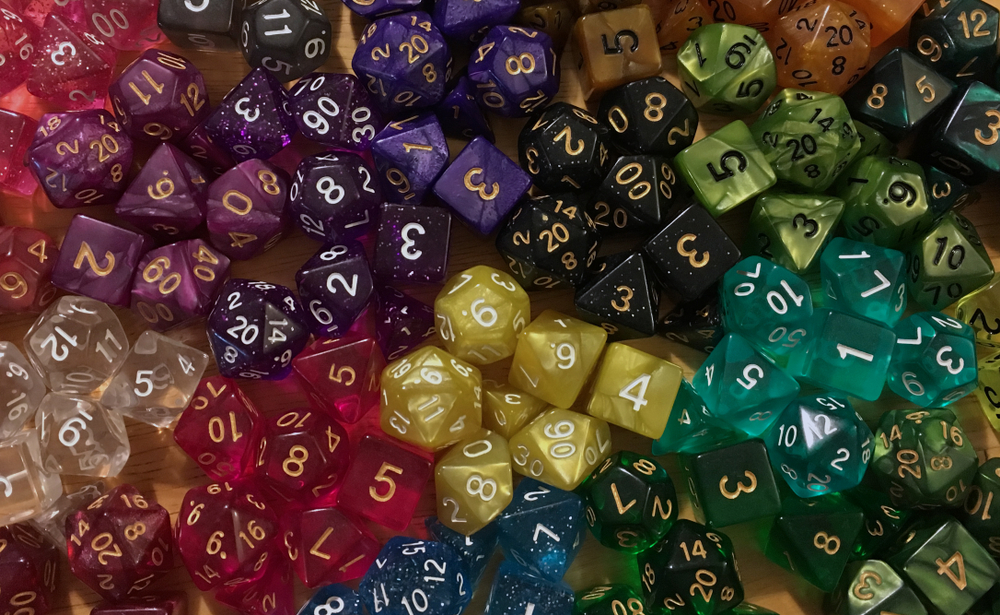 ​
Note from Morrus -- this is the third of Jim Ward's series of articles here on EN World! Upcoming articles include TSR's Amazing Accounting Department, The Origin of Monty Haul, and The Making and Breaking of Deities & Demigods!


Receiving dice from Hong Kong took exactly six months for 100,000 sets of poly dice to be made, shipped from Hong Kong over the sea, and delivered to the boxer in Madison. Naturally, being a careful person “Young Jim Ward” ordered the dice two months early so that 100,000 boxes in December had their dice ordered 8 months out. So in May “Young Jim Ward” ordered dice for the December publication.

I’m proud to say there were problems with getting things in on time before me. After “Young Jim Ward” started, TSR was usually never late on getting product out.

So one day “Young Jim Ward” is doing his job and the vice presidents of the company had a meeting and decide it would be much more cost effective to make our own dice. I had no problem with the concept. I told them my dice schedule and “Young Jim Ward” went back to work. Two months later, the Vice President in charge of getting the dice molds made comes into my office and says I can stop ordering Hong Kong dice.

“Young Jim Ward” became very alarmed and asked, “do we have finished dice molds?” His reply was no but the Dice Vice President was sure we would have finished molds in a few short weeks. “Young and Diligent Jim Ward” didn’t want to stop ordering dice since there wasn’t a finished dice mold yet. He went to his Vice President and got permission to order the next month’s 100,000 dice.

Weeks later the other Vice President comes storming into the sales office. “I thought I told you not to order dice,” he shouted.

“No we don’t, but that doesn’t matter, we will when we need the dice.” The Dice Vice President stormed out of the office and I heard the lecture. I was told if a vice president of the company gave me an order I had to do it. In the next month the Hong Kong dice weren't ordered and it almost killed “Young Jim Ward” with worry.

For two months “Young Jim Ward” got real sneaky and tracked the progress of the dice mold. On the day we were going to be late if we didn’t have Hong Kong dice “Young Jim Ward” sent out a memo detailing the schedule and our need for 100,000 sets of dice. “Young Jim Ward” gave it to all of the vice presidents and Gary Gygax. An hour later the mold VP brought the memo back to my office and threw it in my face.

“We will have dice when we need them. You are not to worry about this matter any more.”

For three ugly months TSR used cardboard counters and a coupon for dice in the 300,000 D&D box sets. The only people happy about that were the prisoners in jail as they couldn’t get games with dice in them.


A TSR Story
Long ago and far away we at TSR wanted to find something that was a possible counter to the success of the Magic the Gathering game. We had come up with highly successful card games ourselves, but we wanted something different. I had studied the issues that made Magic interesting to consumers. The rarity of the cards was high in that list. At a New York toy fair a German inventor showed us a great dice idea. On the six sides he had made plastic buttons that allowed the player to change the faces of each die to make millions of possible combinations. I entered in negotiations with the man and we started working on fun design ideas for the concept. As time went on the weasel of a man kept raising his demands for advances and royalty rates. I could never get him to back down on his demands even when I showed him the quotes from Hong Kong on how much the production dice molds would cost and the cost of the per die rate on each die. Eventually, we had to stop negotiating with the man.

The leaders at TSR were very unhappy to hear that I couldn't deliver this product. We all sat at the conference table very unhappy. Then a thought occurred to me. TSR could make our own dice. We couldn't do the variable spots on the dice, but we could make lots of different dice. We contacted Jim Koplow for the dice. TSR's great artists started making usable icons for the dice faces. Lester Smith led the way in the design of the game and the design team that backed him up did a great job. We produced the Dragon Dice game.

We did all the same things that collectible card games did. We had rare dice, we came out with expansions that could be used with the original set of dice. We made lots of accessories that people bought by the semi-truck loads. Again, I couldn't talk TSR management in also doing a country wide tournament schedule in hobby stores like Magic did.

One more fun story. We were doing a white Amazon expansion set. In that set was one rare die. I ordered this die to be placed in half of the sets. I naturally thought they would put the chase die in every even numbered box in the entire set. When the Chinese saw that I asked for the die to be put in half the sets, they naturally thought they should put the dice in the second half shipment of the dice sets. They shipped the first half and for three months people looked for that chase die and couldn't find it in the sets. They all thought they just didn't get boxes with it in. This led to an amazing price being offered for this one rare die. When the second half of the series came out, they all sold instantly. Good times at TSR.
Click to expand...

Having worked in management, and in warehousing, and as the guy who had to make the deadlines happen in several fields and trades, I instantly relate to 'Young Jim Ward'. 'Young Jim Ward' was a legend!

I must have more of this amazing history!

Thank you for another entertaining article. Can't wait for the next one!

I enjoy this type of look behind the curtain stories from the early days of the company...thanks for sharing!

Those were some pretty shady business moves man!

My funny story about Dragon Dice.

Been working off/on with ways to make a stand-alone RPG with them. Dusted off the 50pg of the most recent (2012) work just yesterday.

What a cool game. What a neat object. So, why a mini resurrection at my house? Well, my kids are now just old enough to play

I am really enjoying these stories. Thank you Jim!

I'm really enjoying these, Jim, and I look forward to more!

From the above, it seems like you were quite removed from the decision makers. This surprised me, because I thought you were regularly gaming with Gary Gygax and Brian Blume at this stage (at least, that's the impression I get from your "Monty Haul" articles in Dragon). Did a strict hierarchy suddenly manifest every Monday morning at 9am? I know a few companies where that happens.

In terms of ideas for future articles, Steve Winter recently mentioned that you and he were locked away in a room in 1991 coming up with new game ideas. I'd be interested to hear more about that.

There will be some future anecdote that brings this all in alignment with the "rule of threes." /Playnskaype

My first D&D set came with the chits, and I remember being pretty confused at first. It wasn't until years later that I first heard this story and realized why. It got my Basic Set in April of 1981, lost most of the chits by summer, and relied on writing numbers of pieces of paper to use as the chits. I think i might not have been until I picked up the Expert Set came out that I finally got real dice.

Just seeing this now. Great stuff, but of course there is more to the Dragon Dice story...

TSR The Mystery Deepens -- Jim Ward Knows Nothing About A New TSR!
2 3 4