Entrails to the face! 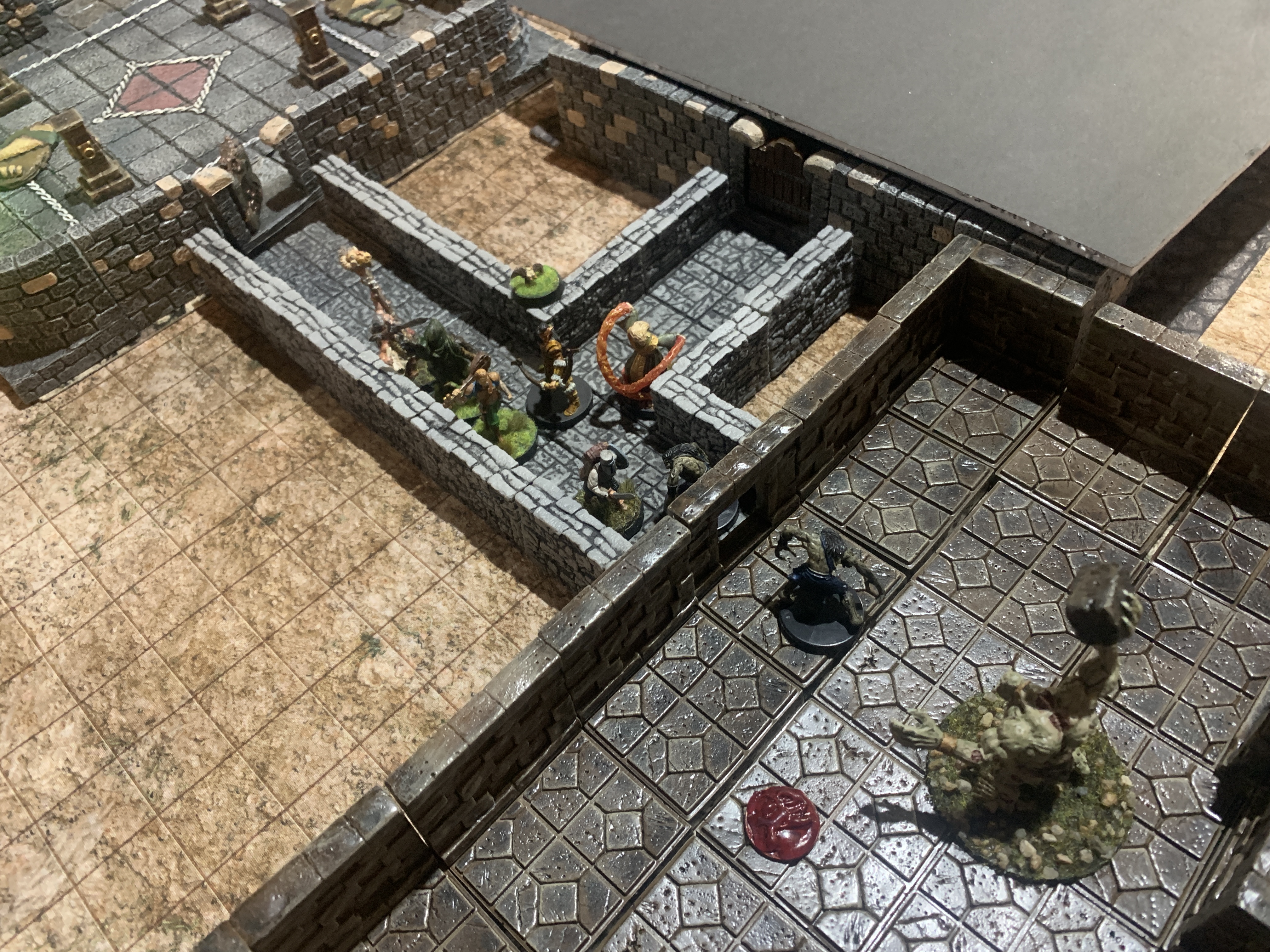 not-so-newguy said:
I like how the Bard is just casually strolling through it all
Click to expand...

The necromancer ghosted us! 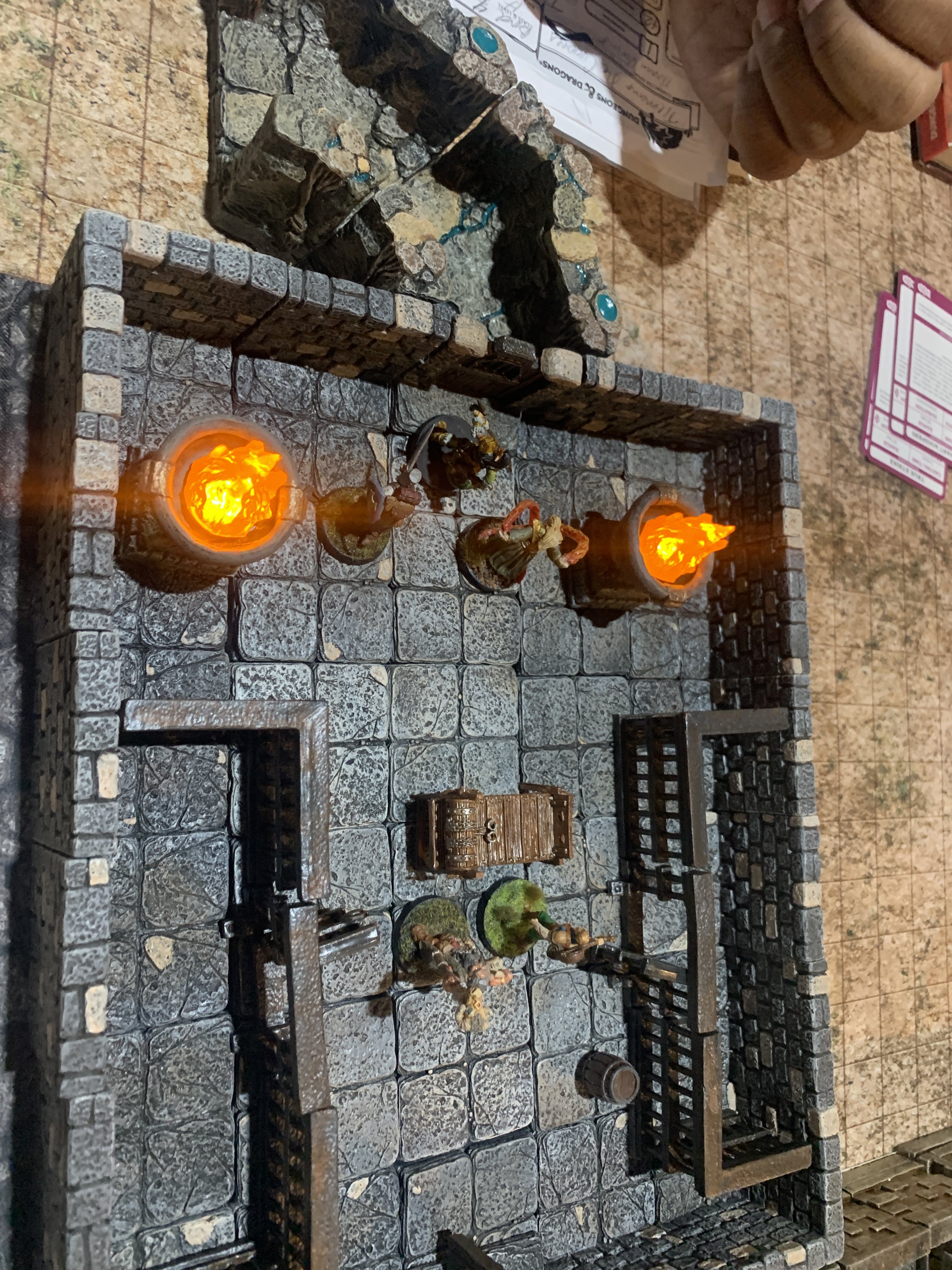 Fireball! Then a chorus of “I’m down” 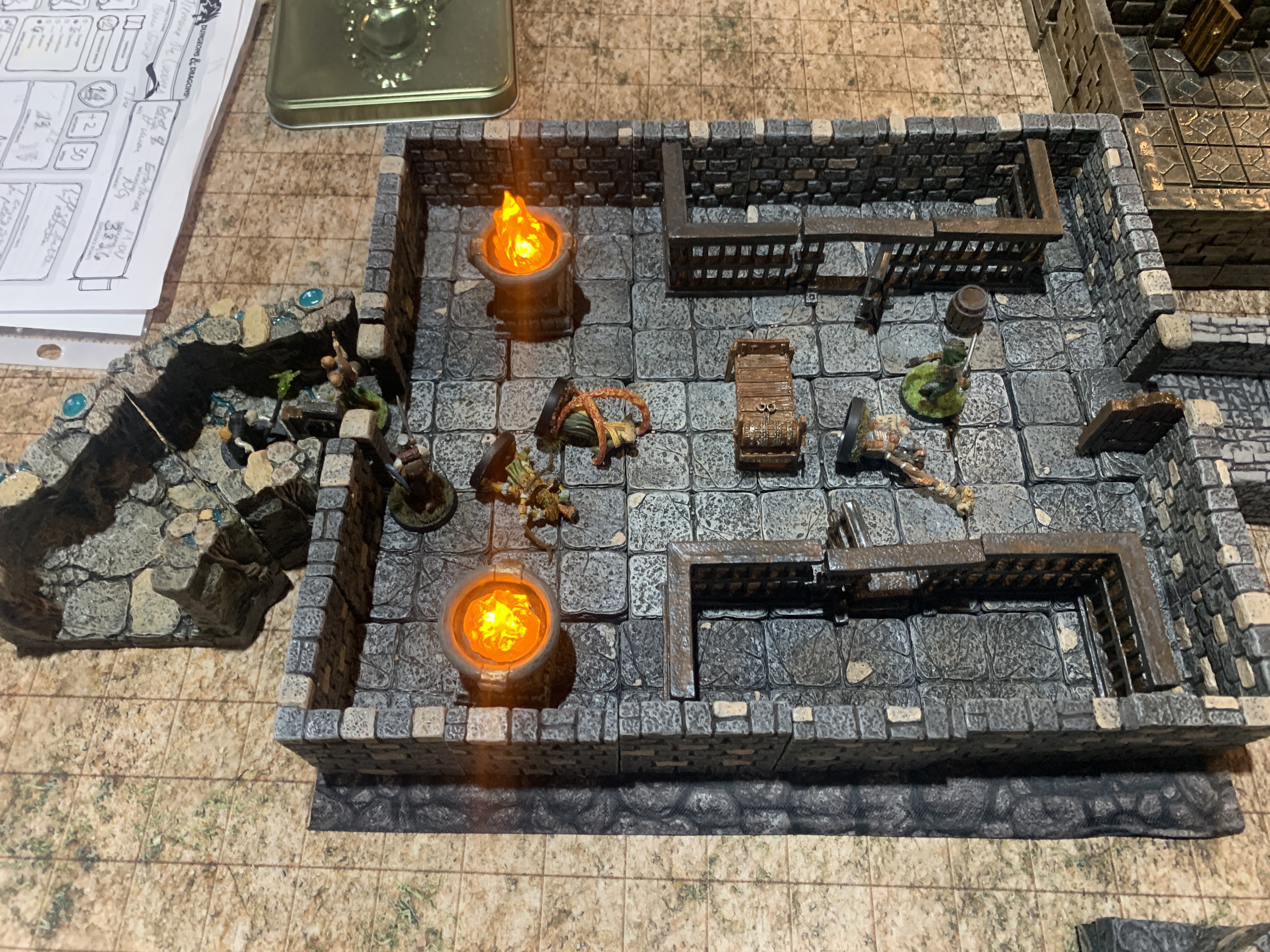 Paladin chasing that necromancer down!
And a character has died! 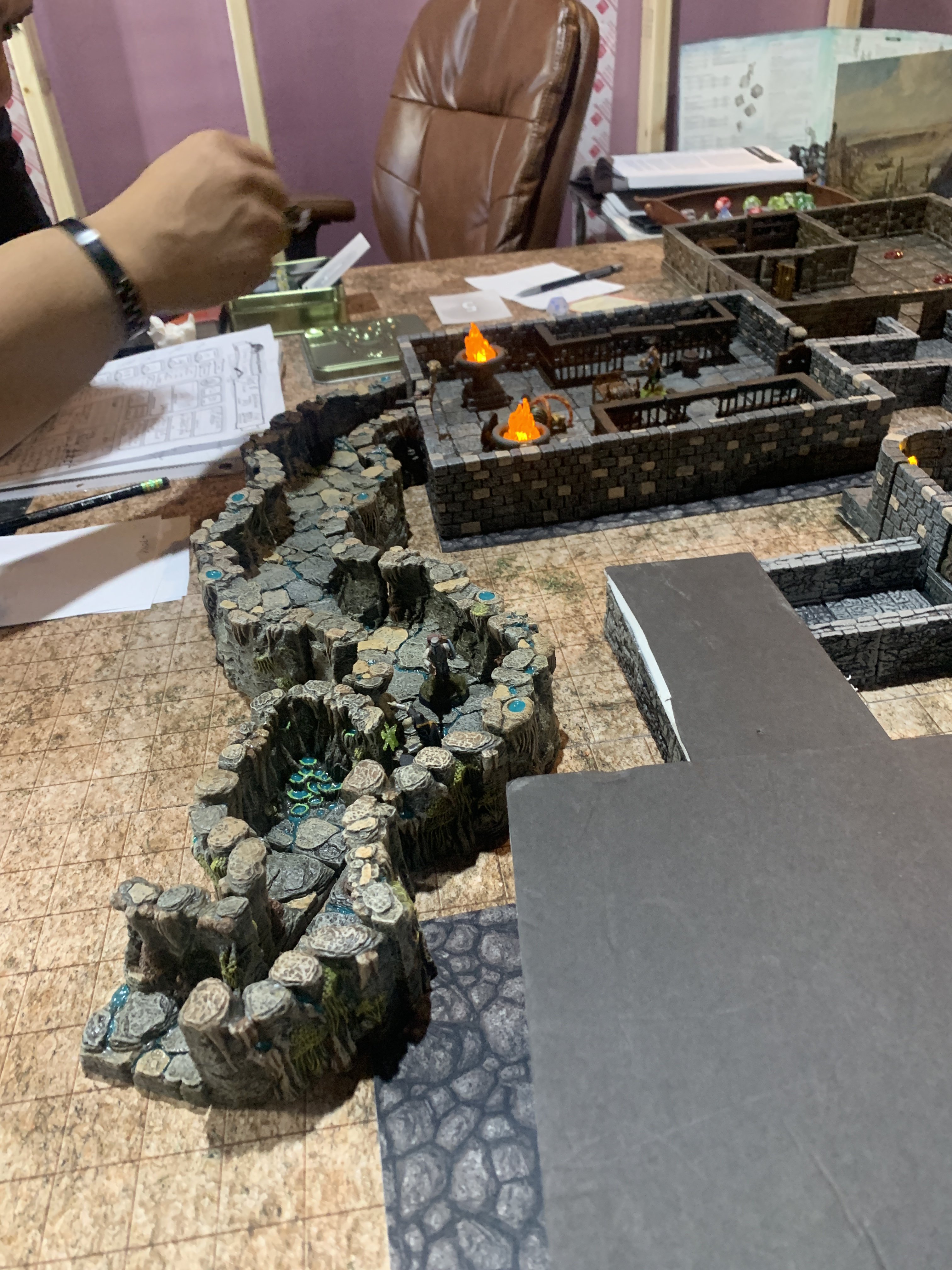 That’s his mini being pulled from the table. 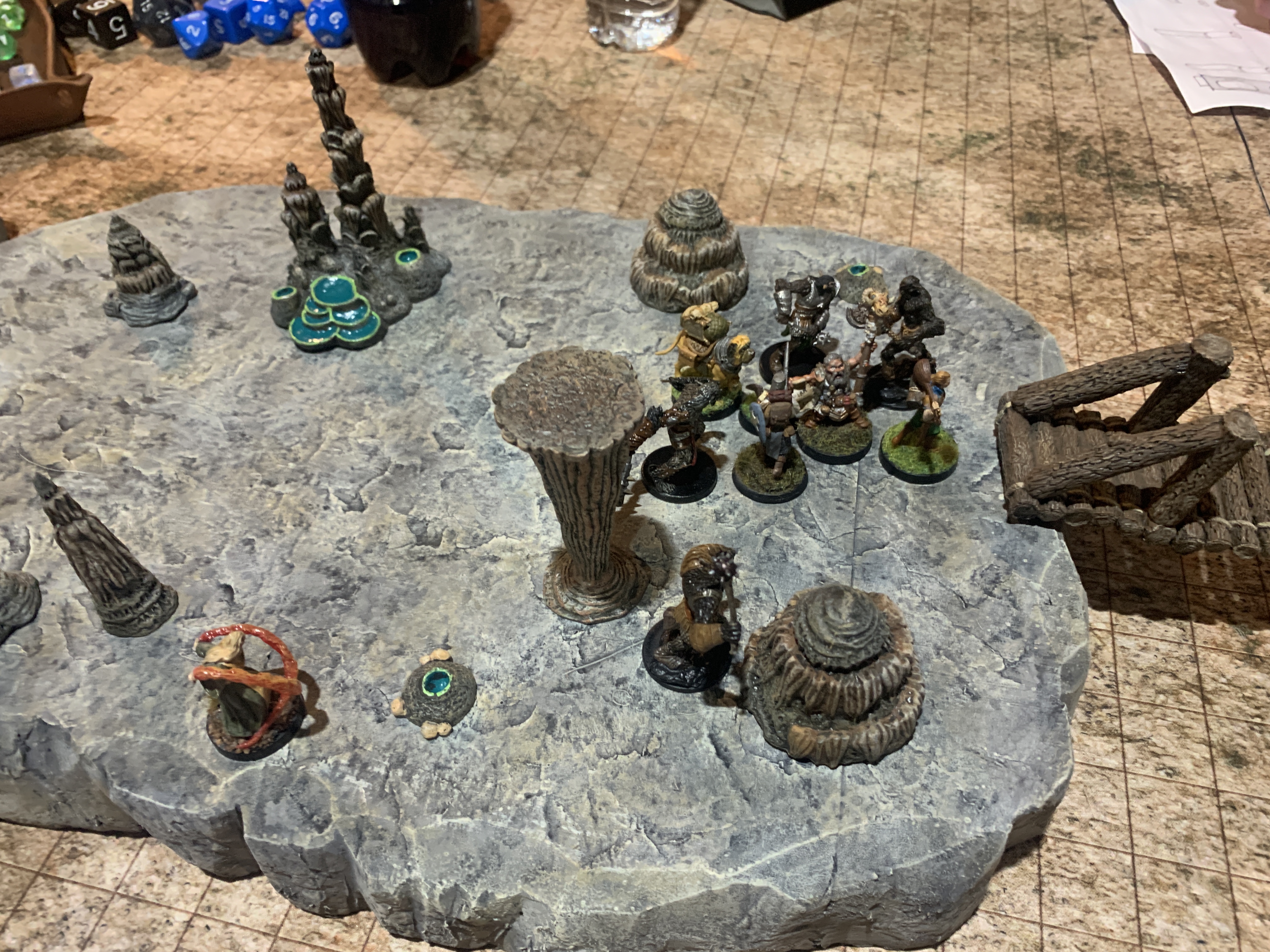 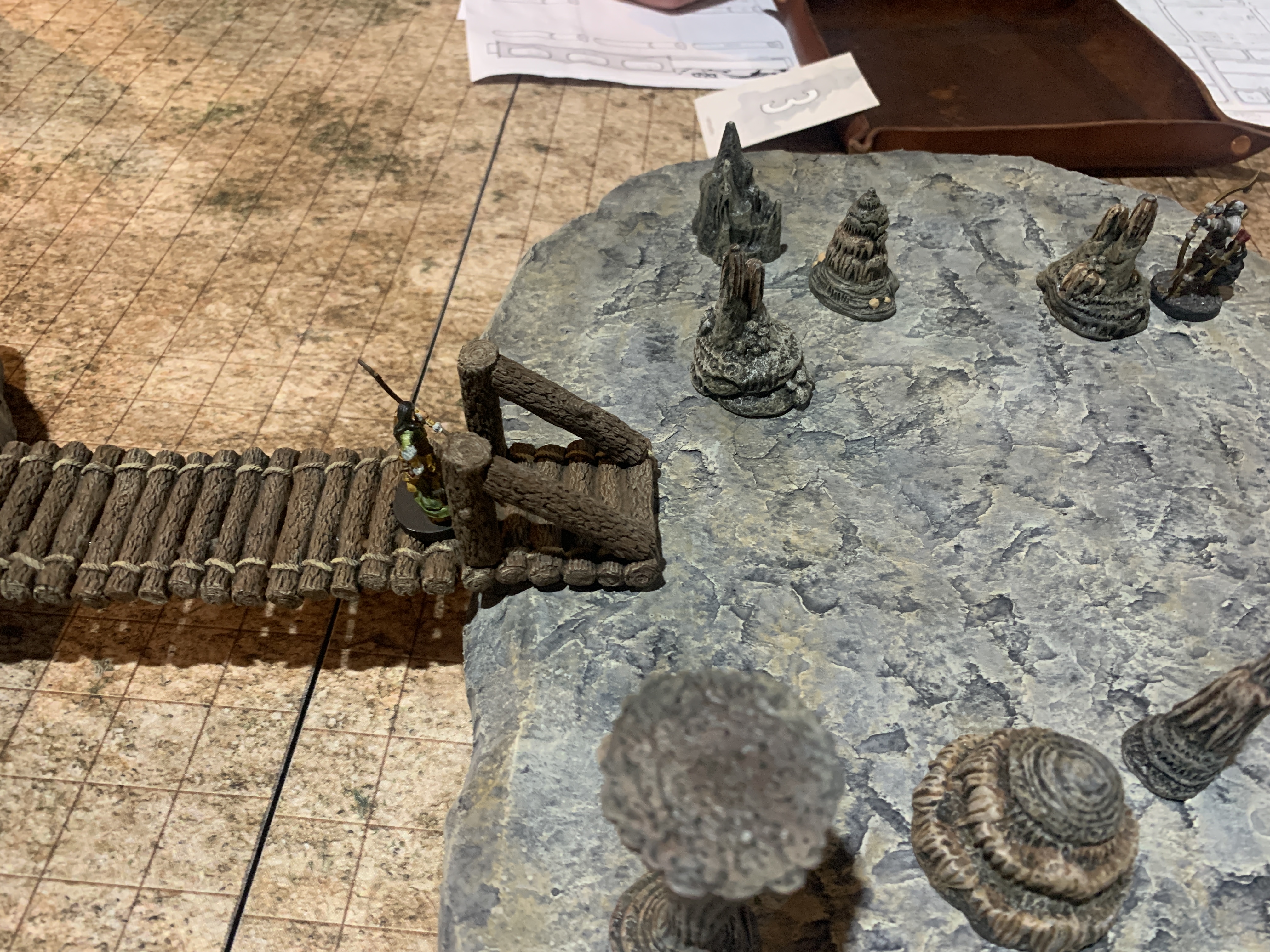 Just you and me Deep Elf! 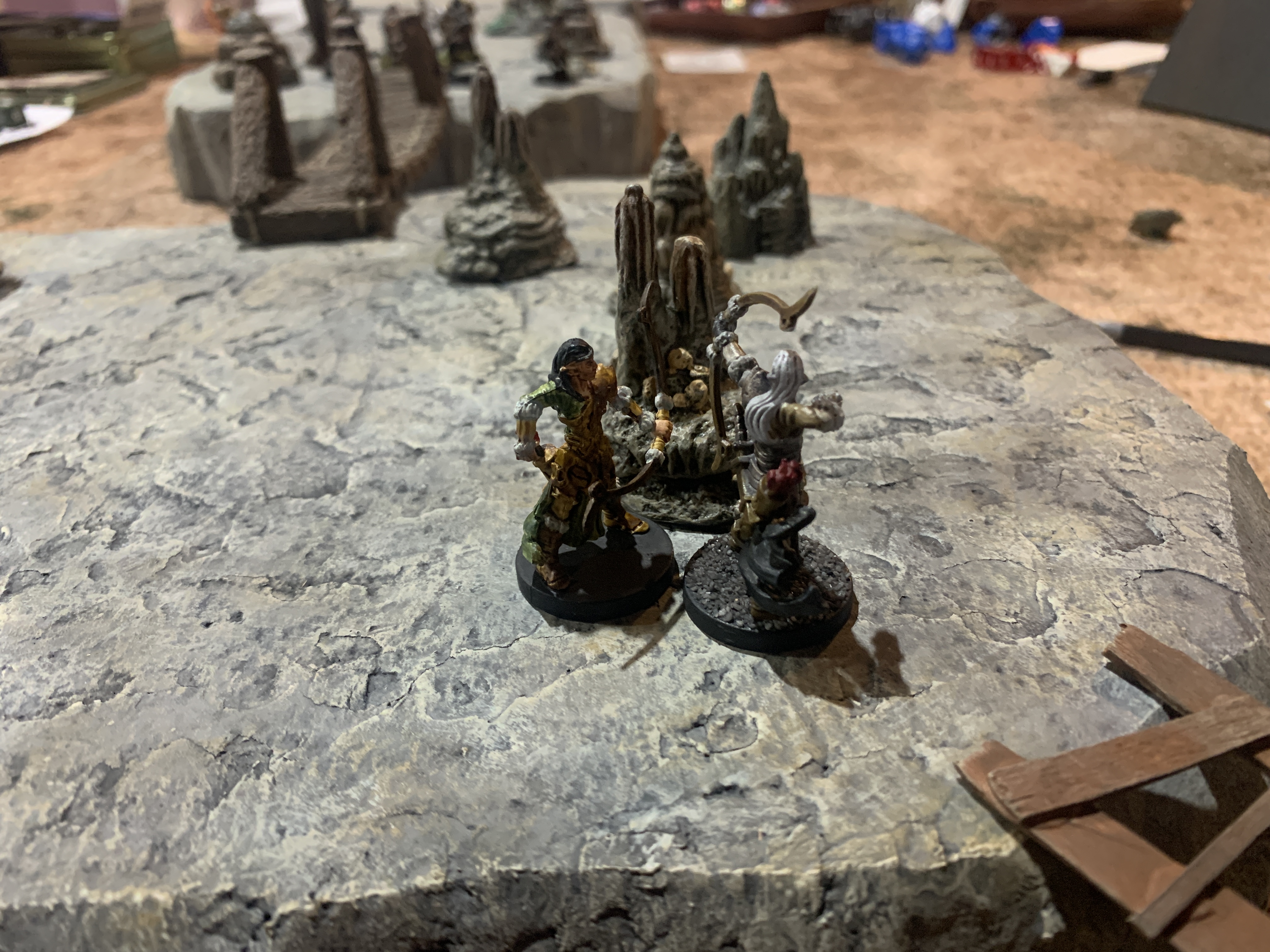 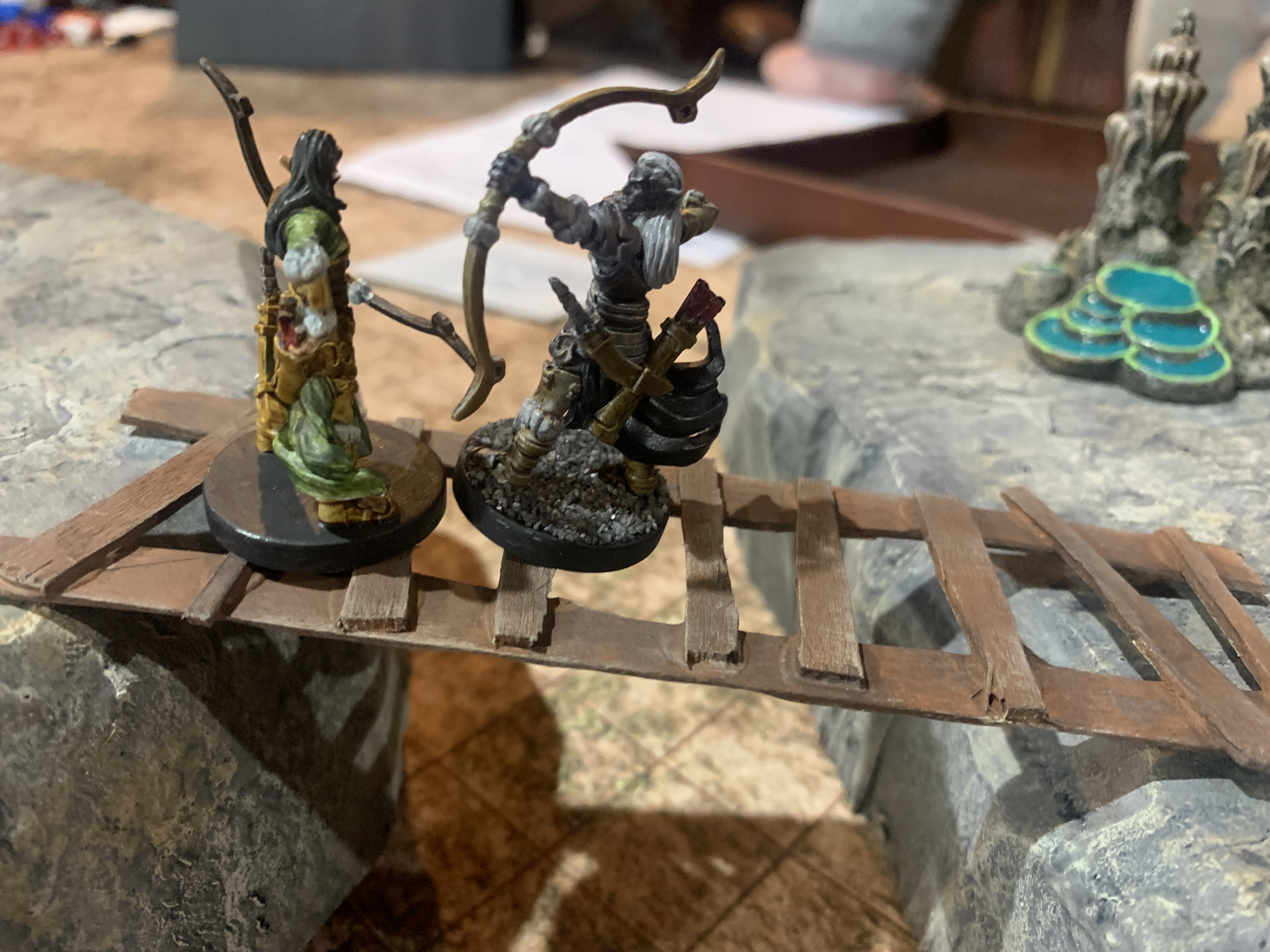 Built this vertical cliff path out of foam for the combat in this afternoon's game. The group was hit by crawling and flying demon creatures. The demons' dastardly plans were undone by the little known cousin of Sister Bertrille, the flying monk, Kleek. Ah well, good session nonetheless. 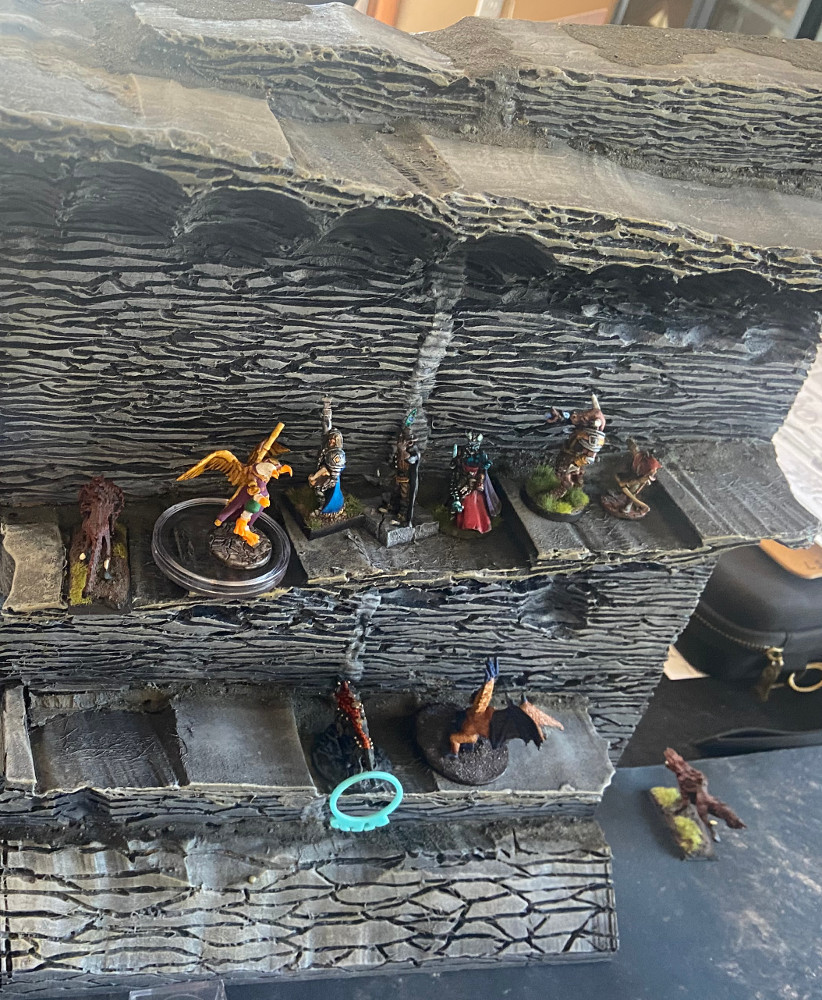 There was a lot going on in yesterday's session, read my post in this thread for more info.

But here are some shots from the action: 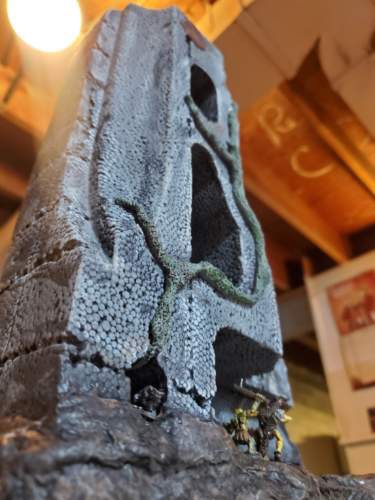 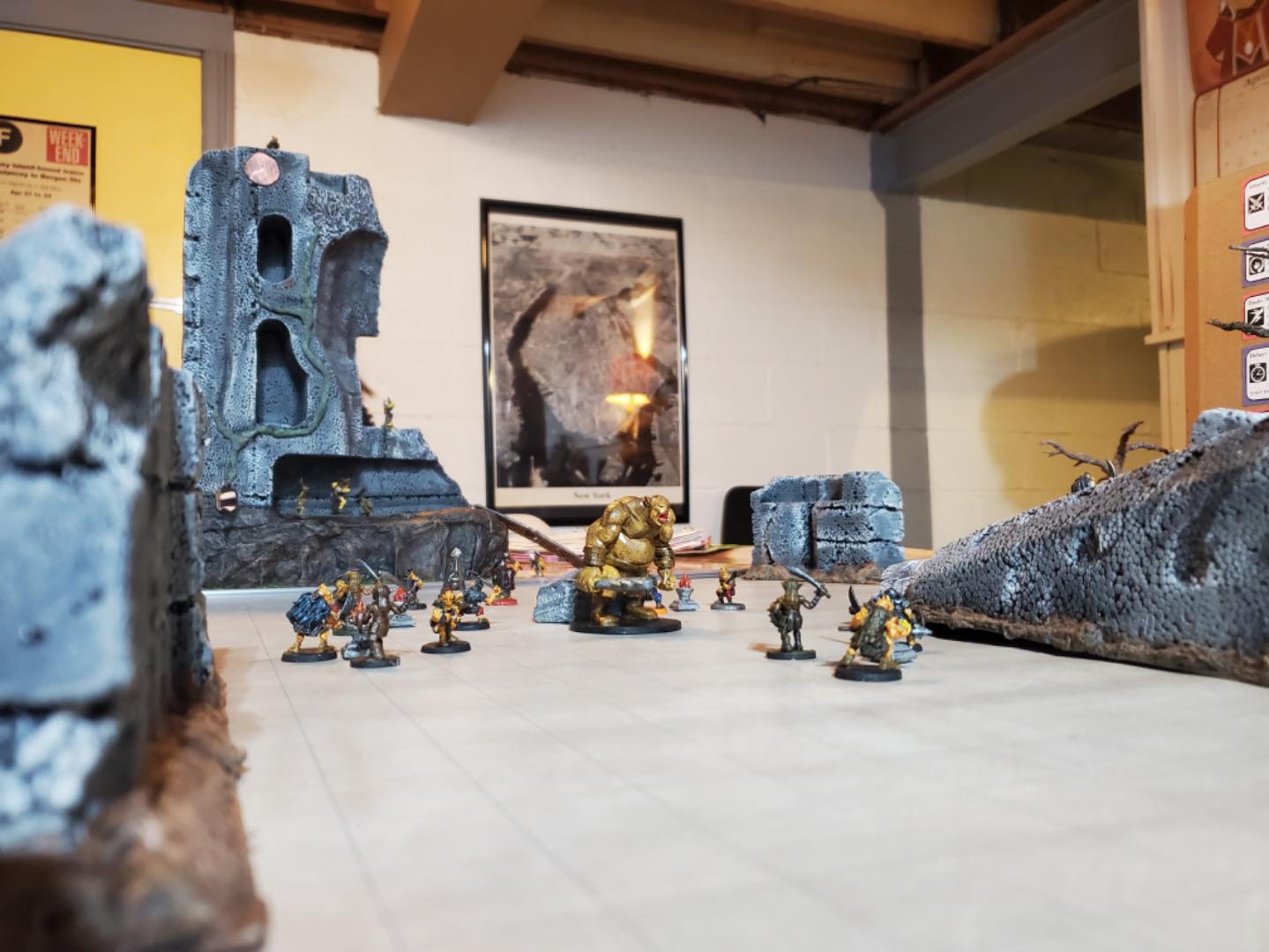 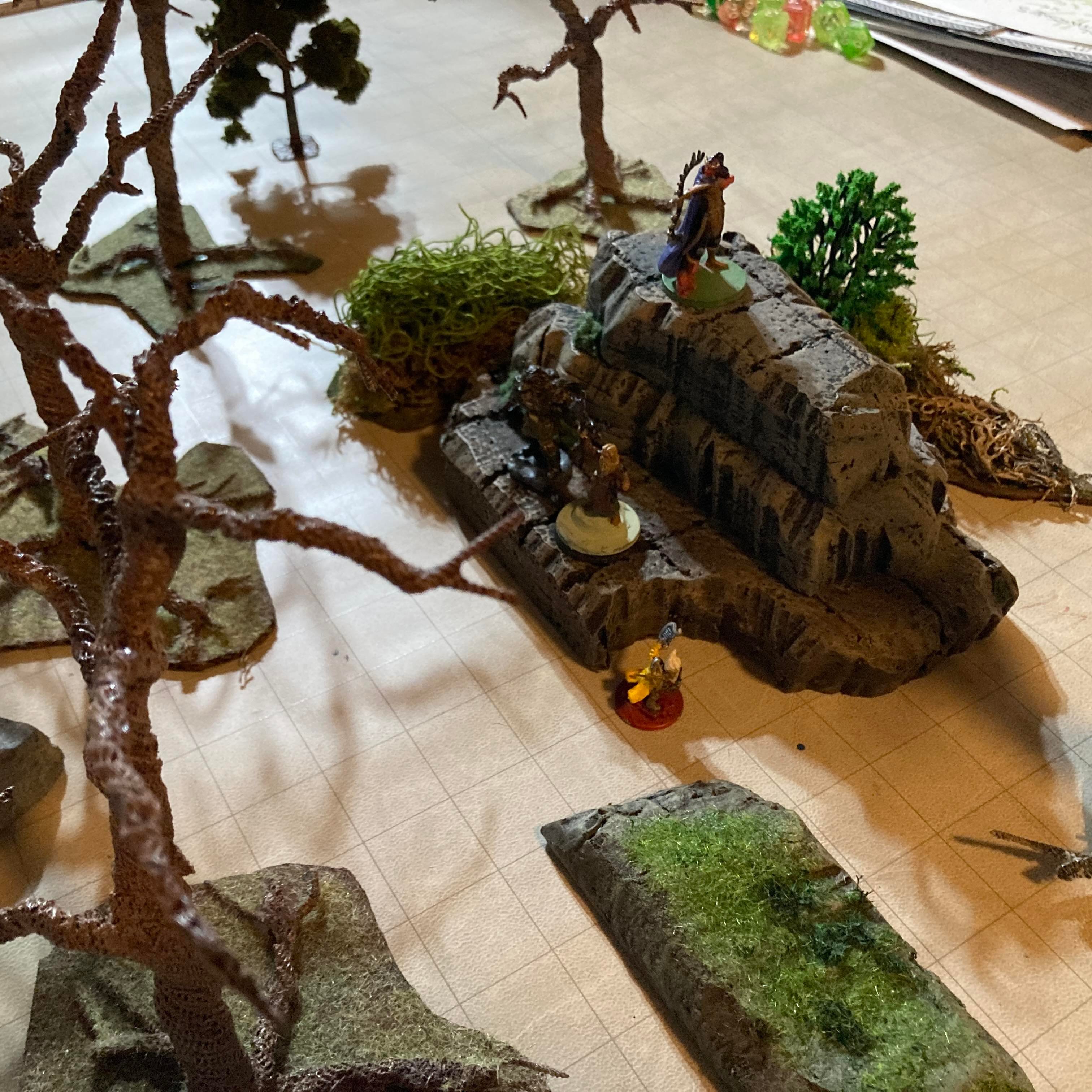 ^Waiting for the firbolgs to come, when suddenly Treants attack! 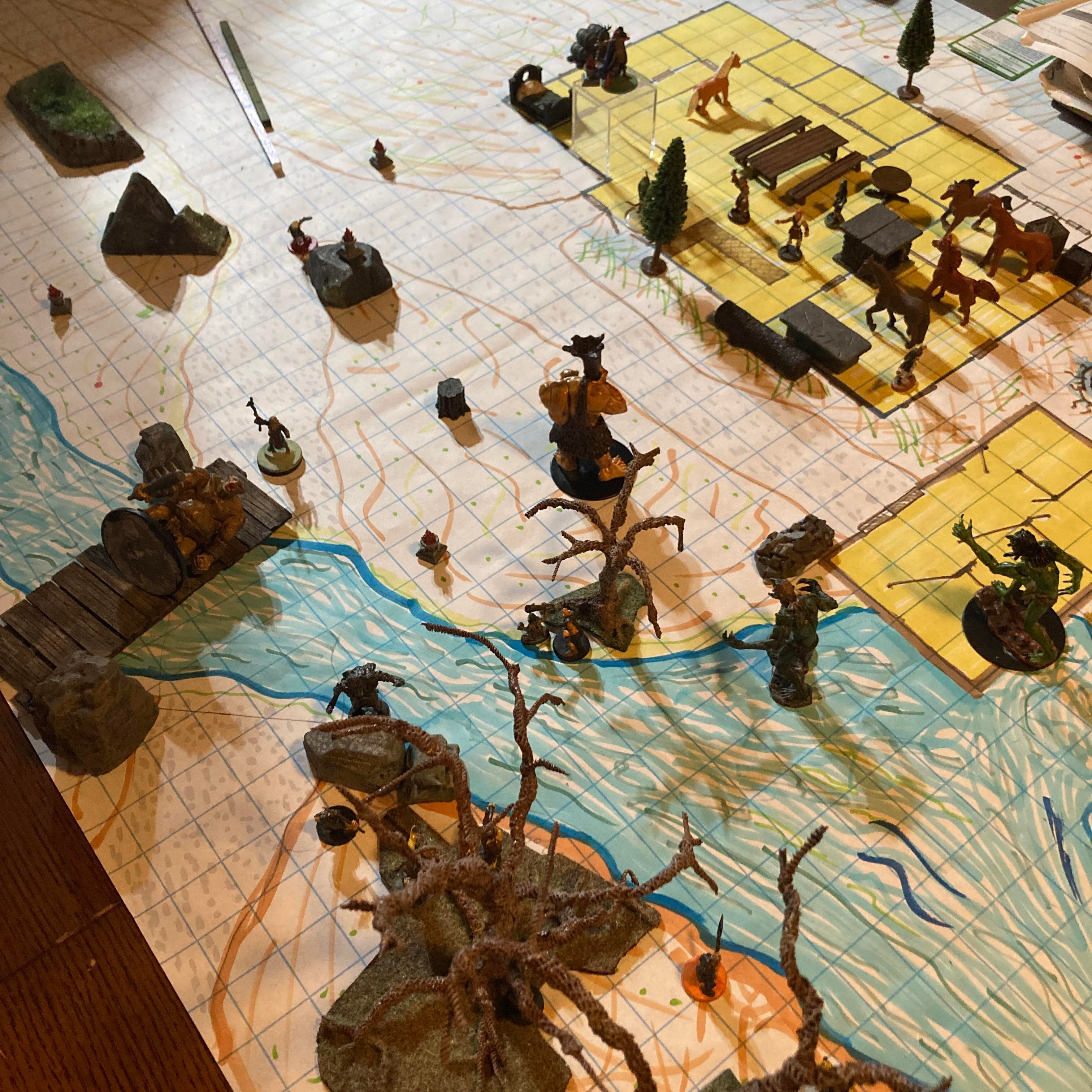 ^ Where we left things. 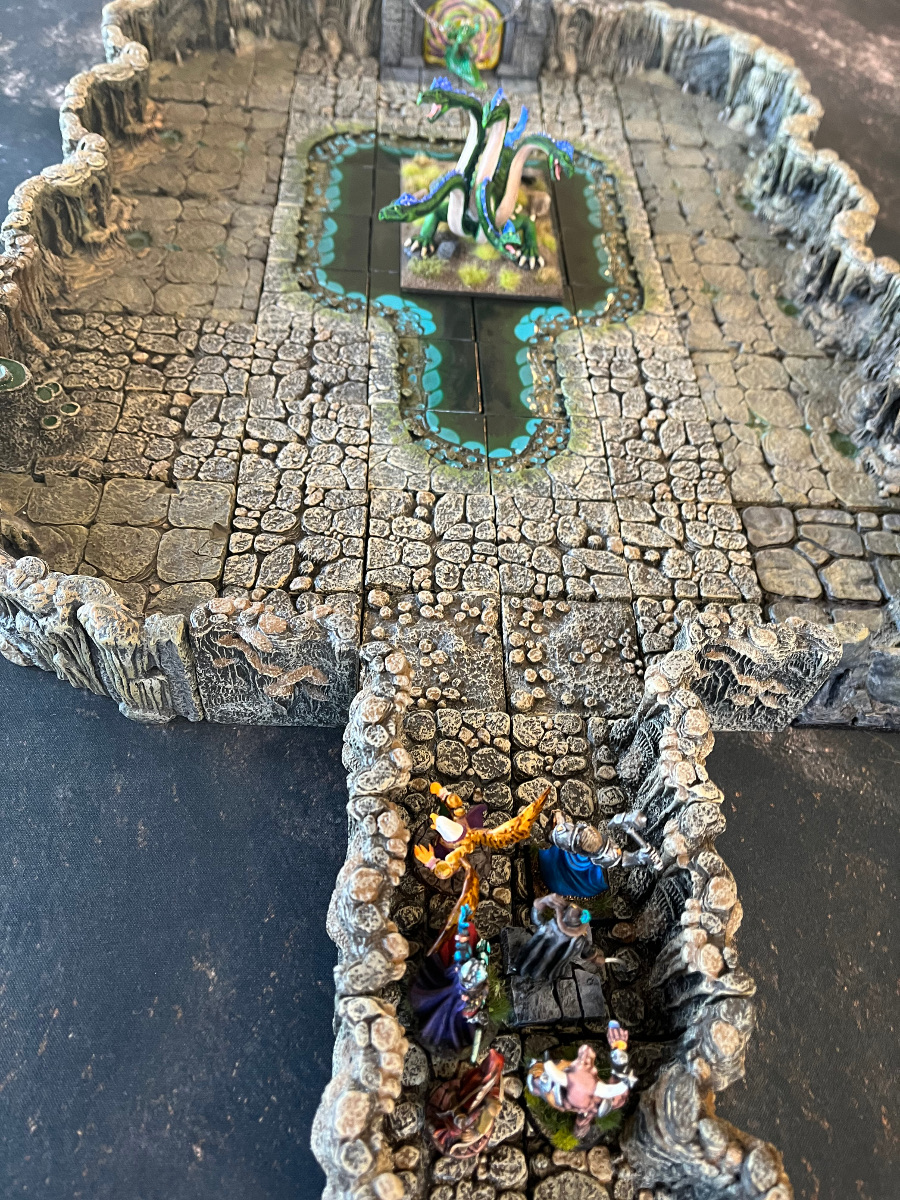 This is the game set-up for the start of our session last weekend. One of our long time players was flying in to play, so I decided to start in media-res to get lots of action in the session! They started in a combat in a warehouse, headed down to a cellar to fight more baddies, and then a secret cavern below the cellar- which, of course, opened up into the sewer system. 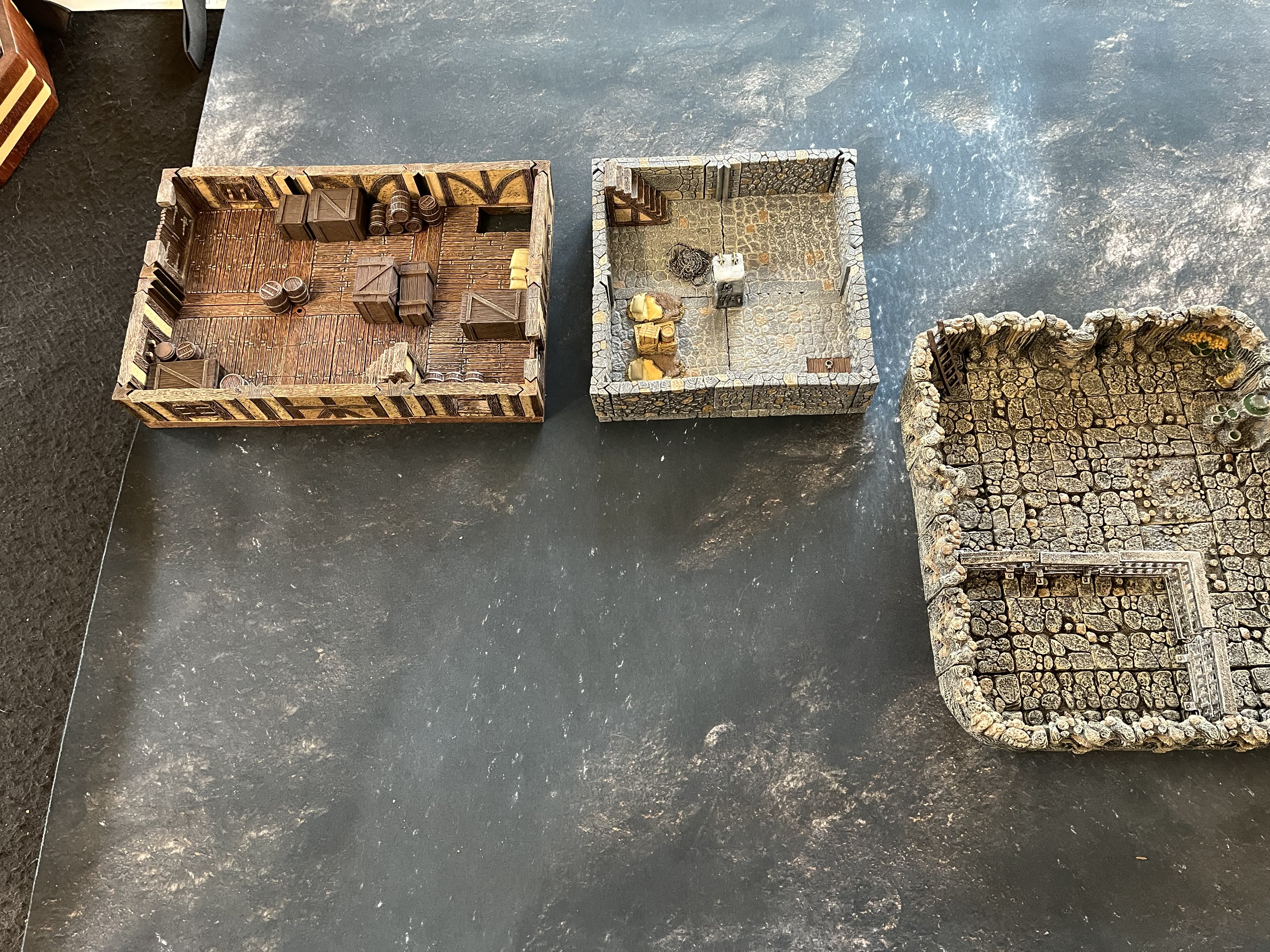 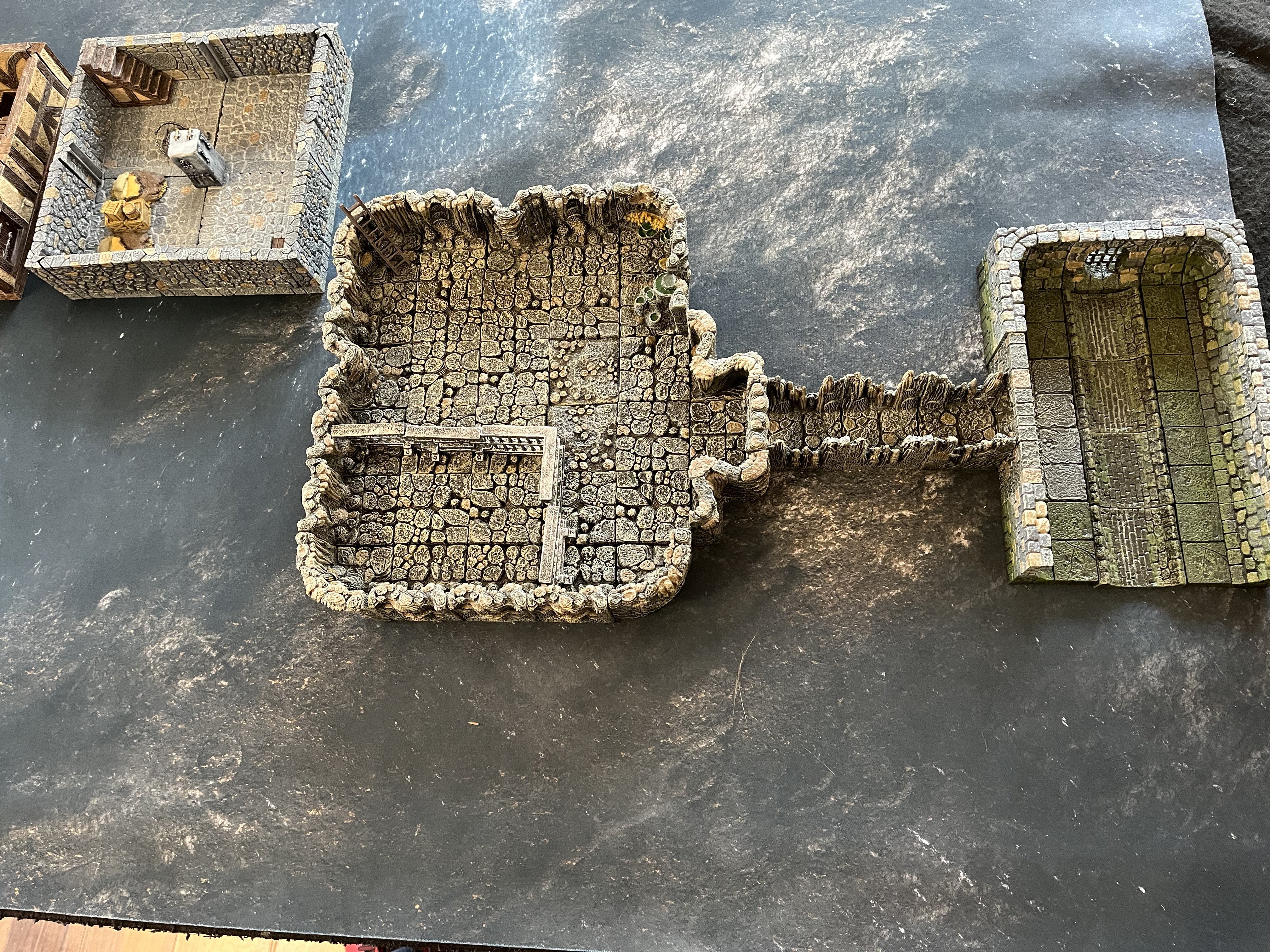 This was the set-up for yesterday's session, taking up the battle where we left it - as waves of ogres, goblins, and trolls arrive to conquer this area.

The wooden raft looking things are actually pieces of an exploded bridge floating down stream. Why are the horses in the inn? The party was afraid to leave them unguarded in the outer stable, so convinced the innkeeper to let the horses be brought in>

Of course, later, when the inn was burning as a side-effect of fighting a rampaging troll that got inside, they had to work to get the horses out.

PCs burn down inns. They can't help themselves. Even if their own horses are inside.

OK, so this is a borderline necro, but I like this thread. Here are some shots from our last adventure this past Sunday. The PCs were taking on a vampire and it's thralls in a large hall. I took the opportunity to use the new foam block risers I finished.

Not quite as good of a picture, but easier to see the elevation of the risers:

Finally, a picture of the PCs delving into some burrows. I need to use my burrows set more often!

Sadly, I did not take any pictures of the final climactic confrontation with Arasta. My high level PCs are cake walking through some pretty tough encounters. Need to pull out the big guns next week. Probably need to push them with some time constraints - I was a little too generous with rests, but we only had 5 players at the table.

Enter the Temple of Pflarr... 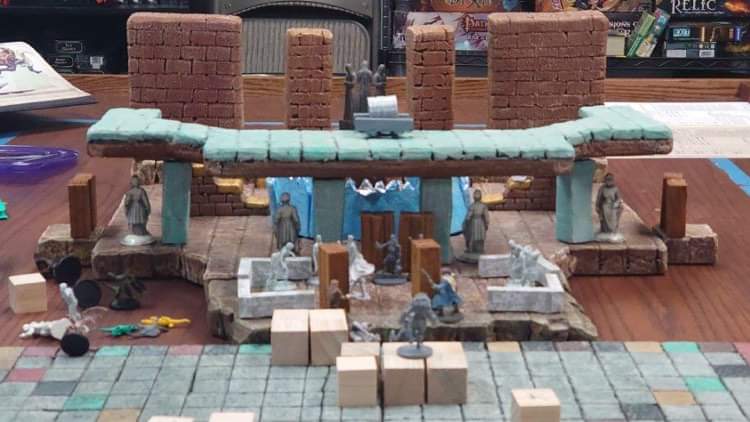 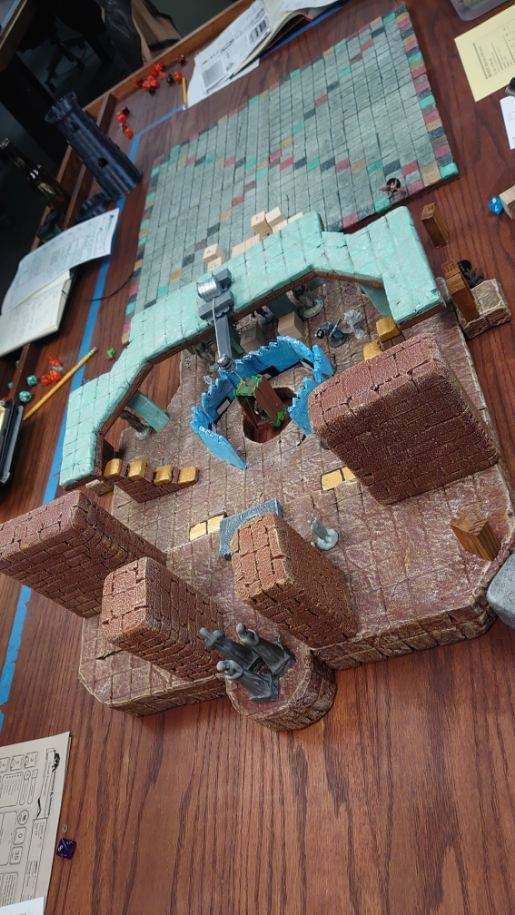 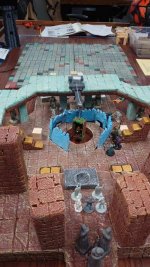 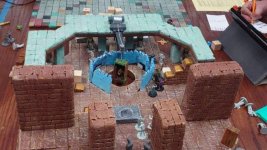 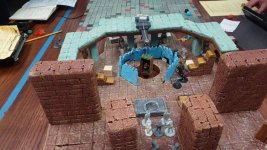 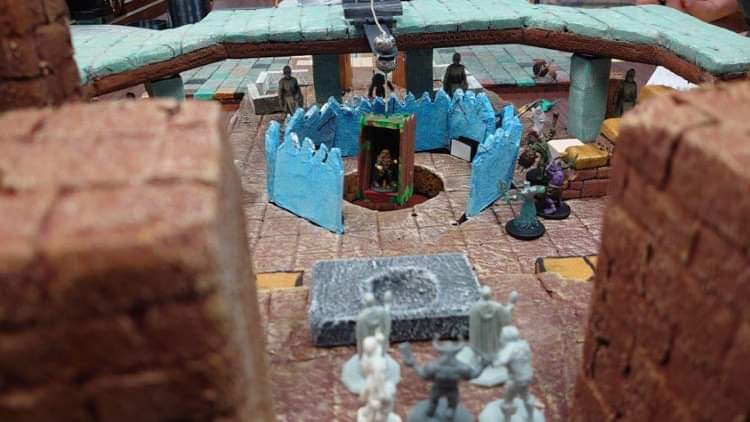 Ok, so this is nowhere as impressive as these fantastic maps and terrain... but it might amuse.

I'm currently running the Dungeons of Drakkenheim campaign (I highly recommend it!). I was struggling to introduce one of the factions (the Silver Order) to the party, so I decided that they would have a "random" encounter with one of their knights in the ruins - the knight is surrounded, the PCs help, now they can talk kinda deal.

I decided to base this NPC on a paladin a friend played in another game, named Antoine Lavache - brave, honest, generous, but also overbearing and supremely confident. But that evening I did not have the time I expected to prep due to real life getting in the way. Because some of my players are remote, we use roll20 for our battle maps. So I just recycled another street map from a previous session in Drakkenheim (a play test, technically not the same campaign). It worked fine, but it was full of the old tokens, so I had to "token-prep" the map in a hurry (ie, "live" during the session) - removing all the old tokens and adding new ones.

One of my player is a bit of a goofball, and rarely ever takes a "serious" token. And I realized that his old silly token would just the thing for this powerful, arrogant knight...

The PCs and their lizardfolk and sea elf allies go down into the murky submerged levels of a sahuagin lair. . . The party druid is wildshaped into a shark form. 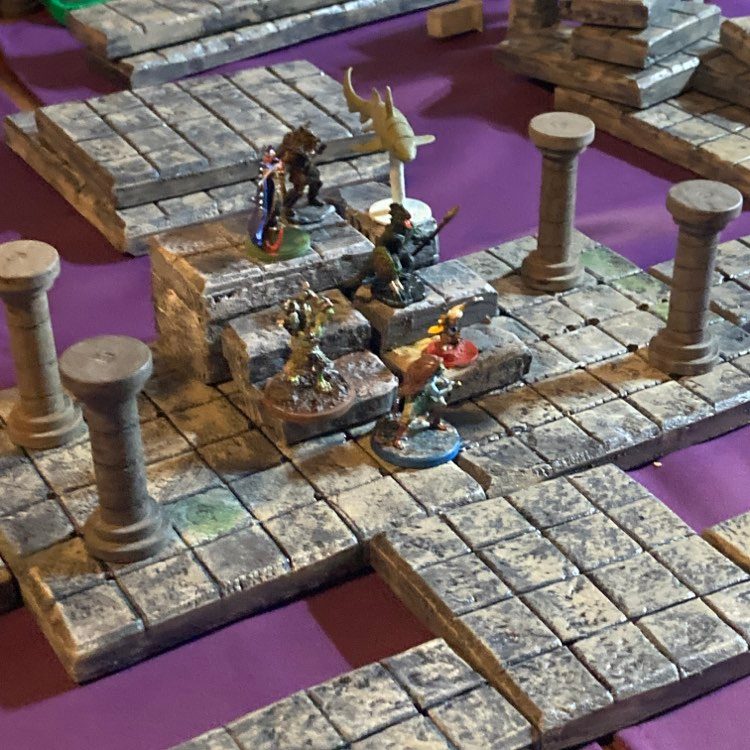 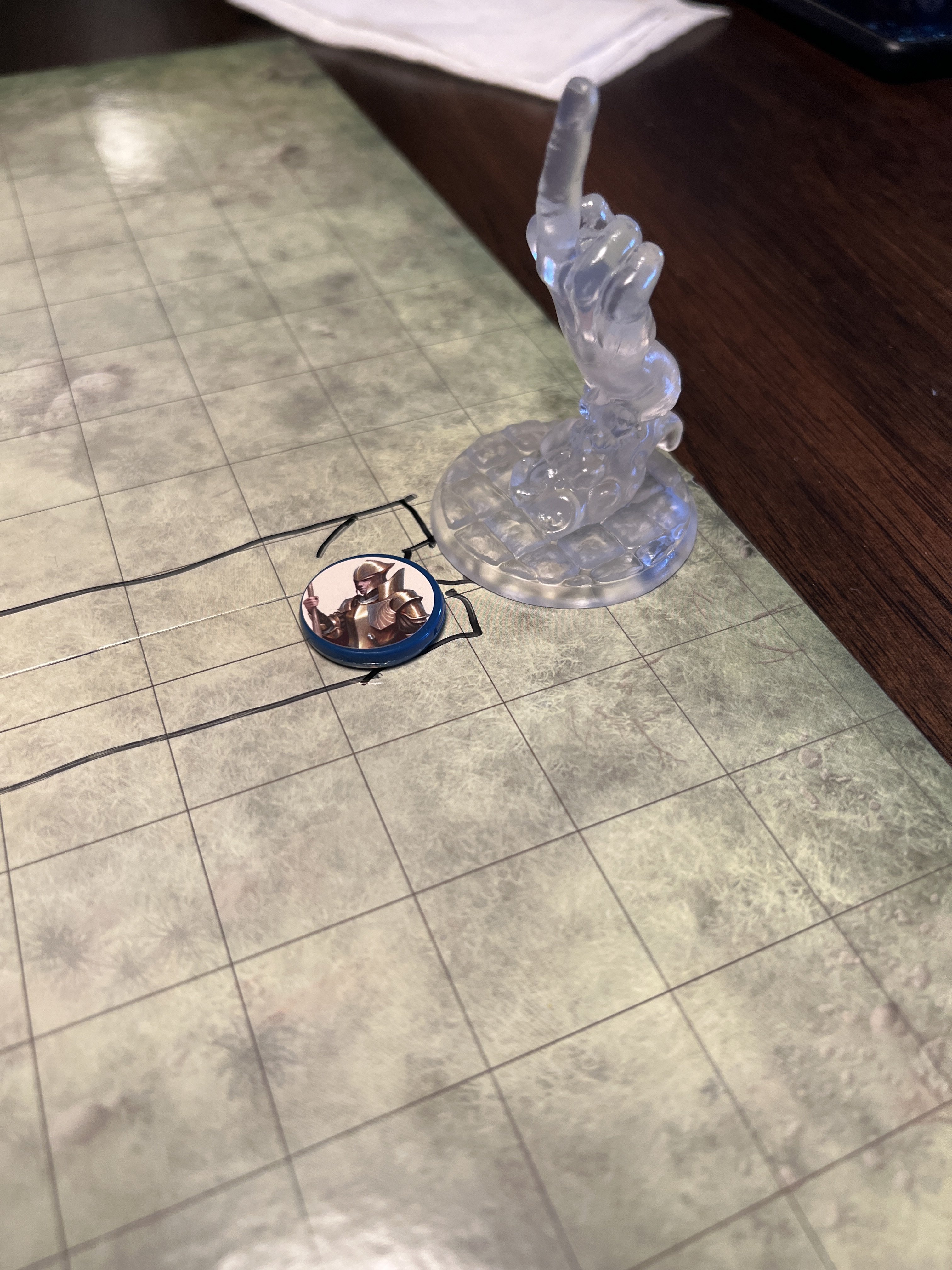 D&D General What is the last OGL adventure you DM'd or played in?

D&D General Original photo of David A. Trampier with his cab, found.
2