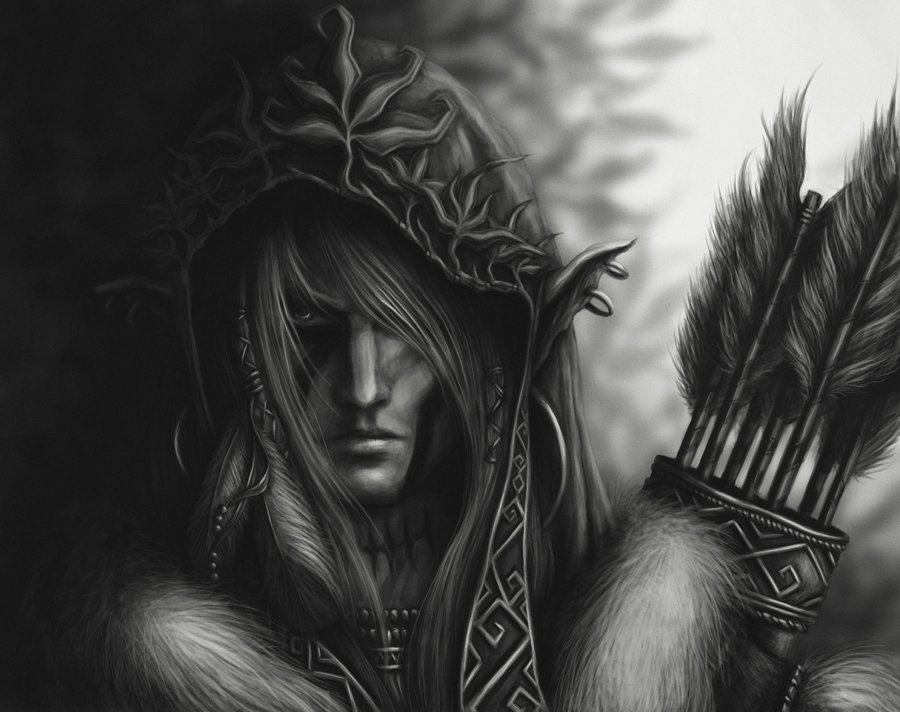 Maelwen Deathseeker is over 6 feet tall, slim and pale featured, with long dark hair and brown eyes that turn completely black when he uses his Undead Adaptation ability. On his wrist is a pure white birthmark, slightly resembling the shape of a dove, a symbol of Sarenrae. He wears a dark green, hooded cloak, embroidered with elven symbolic designs. He carries a masterwork longbow and has a dozen silvered arrows with silver fletching. At his side he carries his +1 Undead Bane Elven Curved Blade, ‘Bloodbane’.

Tactics
Before knowingly entering combat with a vampire, Maelwen:
1. Rubs garlic around his neck and wrists.
2. Casts his two spells, lead blades and gravity bow. Both effects last 5 minutes. This and other additional benefits (e.g. favoured enemy, undead crusader trait, +1 undead bane weapon) provides the following combat totals against vampires for each of these weapons:
• Elven Curved Blade (+19 to hit vampires, 18-20 crit x 2): 2d8 plus 2d6 + 6
• Masterwork Longbow (+16 to hit vampires (+15 x 2 with Point Blank Shot and Rapid Shot), 20 crit x 3): 2d6 plus 2d6 + 5
3. Quaffs a protection of evil potion in an attempt to negate the vampire’s dominate person ability. However, even if Maelwen runs out of these potions, the elven natural resistance to enchantment and his birthmark’s power to help resist charms and compulsions provides a total of +6 to Will saves against this effect. He will almost certainly take the Iron Will feat next to boost this higher.
4. Activates his Darkvision adaptation ability (bearing in mind he can do this five times a day for 10 minutes per use).

Maelwen first seeks to fire his silvered arrows at vampires (negating their Damage Resistance), using his high Stealth (+13) and Silent Hunter ability to get within 30 feet of the vampire before making use of his Point Blank Shot and Rapid Shot feats.

Once in melee combat, Maelwen favours Bloodbane, his +1 Undead Bane Elven Curved Blade (also negates the vampire’s Damage Resistance). Maelwen can also pass on a +2 bonus to close allies fighting the vampire through his Hunting Companions ability. If necessary, Maelwen can use his Acrobatics check (+10) to improve his chances of moving through a threatened square or the vampire’s space.

Maelwen can also use garlic, silvered mirror and holy water from his vampire hunter's kit and puts an end to his nemeses with hammer and stake from the same kit.

If attacking the vampire’s Children of the Night, Maelwen benefits from his +2 favoured enemy bonus against animals.

When being attacked by a vampire, Maelwen gains a +2 to his AC (to make it AC 21 in total) from his Favored Defense feat. In addition, Maelwen can add +2 to his CMD (to make his total 22) when resisting a vampire’s Blood Drain ability. As he gains levels, Maelwen will try to increase his Fortitude saving throw score to aid in resisting the vampire’s energy drain ability. When defending against the vampire’s Children of the Night Maelwen gains a +1 from his Favored Defense feat (for a total of AC 20).