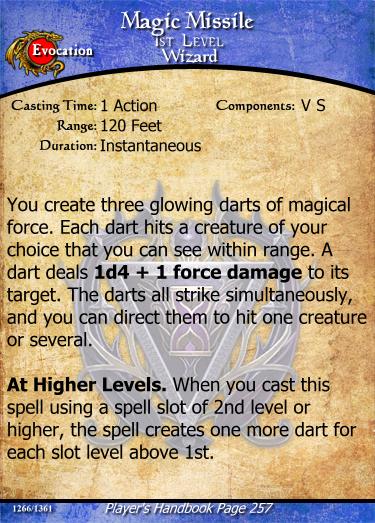 While the new D&D 5E does not really need any spell cards, they are much handier to use than the rule book. And they make it much easier to manage spell lists and prepared spells. Besides, I like being able to add custom spells to the game, especially as a game reward.

And if you like the files, a donation would be nice.

[Original Upload 2015- 05-12]
The background has many options (about 18 [Updated to 33] in all, including various colors, textures, and several with class icon watermarks behind the spell description). Background can be selected to indicate spell class, spell school, or just to identify spell books (e.g. Player "A" has Blue Spells).

The class label beneath the level is optional text.
The spell school is also optional text.
The Dragon Orb (9 color options) is designed to color code spell schools, but they are also optional. I suppose you could even use them to identify spell books.
The Ritual Icon and Concentration Icons are selectable and optional.
The spell characteristics are all drop down menu selections catered to D&D 5E.
A flavor text is provided, but space is limited to allow for more spell description space. I use the flavor text as a reference text. [Updated - deleted]

[updated files]
Based on the feedback and completely recreating the entire spell collection in D&D 5E, I have made numerous updates to the original files.
1. Added font files for those who could not find them.
2. Added Eldritch Knight and Racial to the list of spell classes.
3. Added Eldritch Knight background card with icon. (Shaman is still included, just in case it comes out in the future).
4. Added New Oaths, Pacts, and Domains from the Sword Coast Adventurer's Guide.
5. Reorganized the Spell details to make more room for spell description.
6. Redesigned graphic background (slightly) to make more room for the spell description.
7. Made the spell description field larger, and scaleable, but kept the scale limited to readable size font.
8. Renamed the "flavor text" to "Source Text" (it just made sense to do so and directs players to source when spells have complex and long descriptions)

A second style has been added called Spellbook Cards Simple. Just add it to the Data Folder beside the original style folder for this set. This will provide you two different styles of card sets to use using the same game files. You will not have to change any of your data in your card set.

The new style is designed to be a High Visual for ease of reading. The "Parchment" texture has been removed from the card design and the main card background is plain white, making all text much easier to read.

A fourth style has been added called Spellbook Cards Large Image. This set has a large background image option for the users. Add your own background, whether it be a texture or picture, to customize your cards. I've included a scaling feature in the style to change the intensity of the image to lighten the image to the point of being a watermark. There are pre-loaded colors for the borders, but you can select your own colors. You can also tint the background in the same color as your selected border. The spell details are straightforward text and uses the same information used by the other styles.

A fifth style has been added called Spellbook Cards Scroll. Each card is a scroll between matching scroll rods. There are 26 unique scroll designs. Spell school is represented by unique wax seals. Rituals are indicated by the white ribbon on a wax seal. Spells requiring concentration are indicated by the blue ribbon on a wax seal. Spell domains, oaths, pacts, and circles are represented in one of two ways selectable in the style tab: a unique watermark or a unique scroll ribbon. This is a very clean design with lots of artwork.

A sixth style added called Spellbook Cards Horizontal. As the name implies, orientation of the cards is landscape. Several textures are provided to function as textures or background for the cards. You may also add your own artwork. Both textures and background art have variable intensity. Several borders in various magic spell script fonts are provided. This style can also support non-spellcard entries such as class and race features and actions, or whatever your players needs to assist them at the table. All these options are selectable in the style tab. One other addition is the "edit mode" to assist in identifying a couple of "hidden" block that appear only when needed which keeps the card design clean. Be sure to download the updated symbol-font file also.

Scroll Style has been updated to include watermark and scroll ribbons for latest spell domains.

Scroll Style has been updated to include watermark and scroll ribbons for latest spell domain updates.

I’ve just completed a major overhaul of the game file that will add massive flexibility to users.

Game File. Code has been rewritten and additional scripts and word lists added to the game folders. This update allows all drop down fields to be editable to accommodate homebrew and other game systems. To date, the file had only supported D&D 5e classes. I have also been updating the files to support new additions from the Unearthed Arcana. Now, the fields allow you to enter you own material. Below is the breakdown of the changes:

Download and replace current game folder. Download will include all necessary game files.
Some style files will need to be re-downloaded to work with the new game file design.


These three Style Files will need to be downloaded and replace the older style folders to update the styles to work with the new game file: The Draconic template, the Spell Scroll template, and the Spell Slot template.

All other styles, which present the information in text form, work without any additional changes or downloading of updates.

Lots of work went into this to create flexibility for the users and allow support for 1<sup>st</sup>, 2<sup>nd</sup>, and 3<sup>rd</sup> Edition D&D as well as Pathfinder and other RPG systems with spells. I am examining other RPG systems than can be supported. If you have a preference, let me know.
I will continue to provide these files for free on this site, and will continue to update the files as needed for the community. I appreciate your support.

[Micro update to Game File] 2017-01-16
Minor update to the game file to Support the new UA Ranger: Horizon Walker and Primeval Guardian. Update to the Spell Scroll style in the works.

Game file has been updated to support latest spell domain updates from Unearthed Arcana. Included is the Monster Slayer Ranger Domains and the Paladin Oath of Redemption.

Scroll Style has been updated to include watermark and scroll ribbons for latest spell domains.

SRD OGL now includes spells, so I've included the Spell Data file called SRD D&D 5e Spell Cards which will contain all the SRD OGL spells for D&D 5e. It also includes selected domains, circles, pacts, and oaths applicable to the SRD OGL. That's 893 spell cards in the set (domains, circles, pacts, and oaths spells are listed twice -- once for the non-domain, once for domain).

You will still need to add all the other spells from other sources and annotate the other domain spells, but this file will provide all new users with a huge head start in their spell card collection.

Zip file contains the SRD D&D 5e Spell Cards data usable with MSE, the Spellbook-Card.game file, and the supporting templates, as well as the SRD Open Game License applicable to the data set.

Back Style:
The card back style was a special request from the user community. This is a large image format style to produce the cardbacks for the spellcards. One Spellbook image is provided for the card back in the template, but the image is customizable and you can use any image you want for your card backs.
There is a border option to add either colored borders or use a full-bleed image.
There is an option to include Spell Levels, Spell Class, or both.
There is also a Free Text field you can use to custom label your deck.

Large Card Style:
This style is a double sized card that produced 4 cards per page instead of the 9 cards per page standard. It is designed for those who have difficulty reading the spell cards and for complex spells that have long descriptions and details. The border is stylized and is color selectable. The backgrounds options include the traditional parchment and other high-visibility background.