John Wick bought the rights to his 1999 7th Sea roleplaying game back last year with the intention of releasing a second edition of the game. That new edition has just hit Kickstarter with a bang - $66K in under an hour, more than double its funding goal. "John Wick brings 7th Sea back in a 300-page, full-color, hardbound book. Revised rules, revised Nations, updated for the 21st Century." John Wick is, of course, an international assassin who goes on a revenge spree after some Russian criminals kill his dog. No, wait, wrong John Wick. 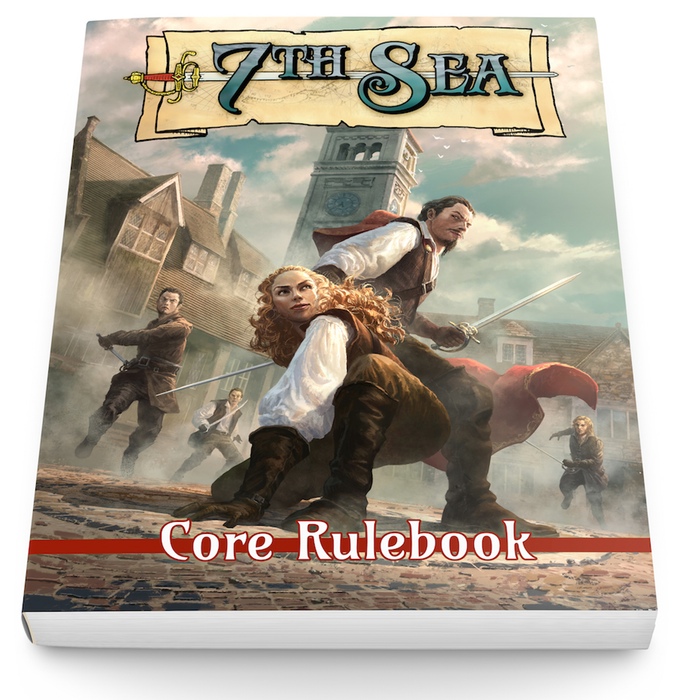 ​
There's already a Quick Start PDF, which backers get free access to immediately. You get two PDFs - an adventure called Long Live the Prince!, and five pregenerated characters. The adventure is 33 pages long, and includes basic rules. The Kickstarter itself offers the hardback for $60, or the PDF for $20.

What's 7th Sea? Well, it's an RPG by John Wick, originally released in 1999. In Wick's own words, "7th Sea was a game inspired by the works of Alexandre Dumas, The Princess Bride, and other novels and movies of high adventure, and it played fast and furious, emulating the pace we've come to expect from movies such as Captain Blood, The Three Musketeers, and Pirates of the Caribbean." The setting, Theah, is very similar to 17th Century Europe.

The 2nd Edition of 7th Sea (the one being Kickstarted now) is the 3rd most anticipated RPG of 2016.

Wick himself is no stranger to controversy. He recently told us about how Tomb of Horrors is the "worst, &#@&$&@est, most disgusting piece of pig vomit ever published". A couple of years ago, he created widespread internet arguments when he stated that "The first four editions of D&D are not roleplaying games."

You can find the 7th Sea Kickstarter here.
Click to expand...

Epic
still on the fence on backing this one, never liked the rule system but loved the setting, may be worth it just for that.

With all the unlocked material, backing it is such a great deal. $60 gets you the physical core book, as well as PDFs of the core + the first SIX supplements (around 200pg. each), along with electronic versions of maps, novels, villain and hero cards, and a city supplement.

Banned
I hope that he is at least going to make sure that this version is an actual Roleplaying Game.

Shasarak said:
I hope that he is at least going to make sure that this version is an actual Roleplaying Game.
Click to expand...

Well, hopefully it will be better than Tomb of Horrors....

But seriously, I liked 7th sea a lot and I'm glad it's making a come back. And the Kickstarter has already almost reached half a million with a month to go!

Aliens? In or out?

kalil said:
Aliens? In or out?
Click to expand...


Out. (according to a pre-kickstarted interview he did)

doctheweasel said:
Out. (according to a pre-kickstarted interview he did)
Click to expand...


I am slightly dissapointed, but it is probably for the best

Zaran said:
This is the same system that Legend of the Five Rings uses or am I thinking of another setting?
Click to expand...


1st edition was a VERY close relative to L5R.
2nd edition is mechanically rather different, judging from the QS.

The minimum pool for competence is 3d...

For comparison...
1st ed was

Thanks for the explanation....seems like a lot of rolling and such but like anything, couple sessions and its second nature and quicker I'd imagine (for those rookies to the game).
Like stated above - I like the setting as well, always been a Princess Bride fan and dread pirate Roberts

edit - backed mainly for the setting, then I'll try the actually game out eventually.
Last edited by a moderator: Feb 13, 2016

If anybody has backed this Kickstarter, do you gain immediate access to all of the first edition PDFs, or do you have to wait until the second edition stuff is delivered?

samu0034 said:
If anybody has backed this Kickstarter, do you gain immediate access to all of the first edition PDFs, or do you have to wait until the second edition stuff is delivered?
Click to expand...

You get immediate access to the quick start rules (which will get an update. When I don't know). The $300 with of 1st. Edition PDFs come at the end ( after you have actually paid.)

a) This will be more than any other KS for a tabletop rpg. Ever.

b) As a stretch goal, they will release some basic rules for free (similar to 5th edition D&D doing so, perhaps).

Also, there will be a newer version of the Quickstart rules out later in the week (they are responding to feedback, I believe).

According to Kicktraq data, the KS has been closing on a projection between 800K and 1,200K, going flatter and flatter as the days go by. So perhaps we'll see it finish in the 1 million mark?

Of course, one never knows with these things; lots of KSs get a sudden bump at the end due to the "About to End" reminder tempting people who see a succesfully funded campaign with lots of stretchgoals, but seeing how pledges have been stabilizing somewhere between 10k and 15k for the past 10 days or so, and considering we're 18 days from the finish line, 200k-300k more seems well within the mark.

One thing certain is that we're getting a lot of maps. And I love them maps.

PS: Here's the link to the Kicktraq page for the campaign: https://www.kicktraq.com/projects/johnwickpresents/310731843/#chart-daily

Podcast #223: Mythology and Religion in RPGs