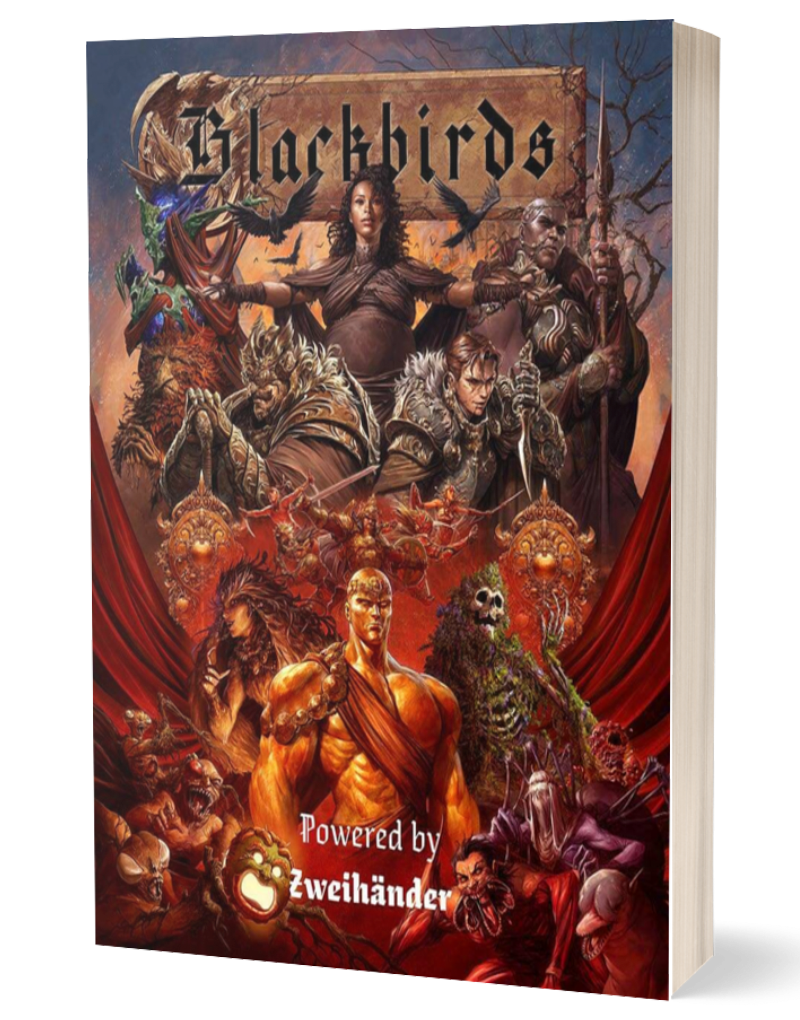 Dark fantasy has been having a moment these past few years. Whether you’re talking House of the Dragon or The Witcher it seems like many tables want their swords and sorcery to come with some doom and some gloom. Last year, designers Daniel Fox and Ryan Verniere made a six figure splash on Kickstarter launching Blackbirds using the Zweihander RPG system based on the second edition of Warhammer Fantasy Role Play. The game has started to drop one year later and Andrews McMeel sent along a beefy 674 page tome for review. Is the game worth the risk of throwing out your back picking it up? Let’s play to find out.

The world of Blackbirds, Erebos, is in the calm before the apocalypse. A cabal of rich and powerful people, unhappy with being merely rich and powerful, started massive wars to power a ritual that allowed them to storm heaven and slay all the old gods. These new gods, calling themselves the Oligarchs, will soon return to the world and reshape it in horrible ways. The Child of Longing wishes to turn everyone into half-human, half-moth mutations. The Golden Messiah wants the whole world to worship him and will turn anyone who doesn't into gold that’s melted down to make new shining garments for him.

The old gods, however, have one last trick up their sleeves. The Norns of Fate gave up their power in hundreds of small shards that nestled in the hearts and souls of regular people. These people, called Blackbirds, now find themselves drawn together with newfound abilities and seeing visions of how to stop the Oligarchs. The world of Blackbirds is perched on the end of an old era and it’s up to the players to see if it survives the fall into a new age.

Blackbirds uses a system heavily inspired by Zweihander and Warhammer Fantasy Role Play. Characters roll percentiles to achieve success and spend fortune when the dice don’t come their way. Combat uses an AP style system that lets players decide if they want to go all out on attacks or hold back for defense. Characters are split between three tiers with each tier unlocking new abilities. They also bounce between two related alignments, one that fits the themes of order and one that aims for chaos.

It also represents a step away from those inspirations. Rather than dozens of careers that run the gamut from heroic to ironic, there are just six paths. Each path contains a few Talents and Techniques which the players can choose to slot for free when they are at rest or can switch up if they are willing to spend Fortune points. Heading into a fancy gala? Slot in a technique that will give you bonuses to social skills or one that might let you slip into more secure locations at the manor. Know a fight is coming? Time to put in your brawler technique or the one that lets you enhance your flock’s weapons. In addition to specialty actions and passive bonuses, these techniques also have an Extinguish Action which gives the Blackbird a daily power-style action that locks down the slot until your characters have had a chance to recover. Many of the combat ones have battle ending powers that feel like those big screen clearing combos from arcade games. The non-combat powers have just as much narrative heft, such as being transported someplace with nobody noticing them or deducing the weakness of a creature they must face in battle. The Talent and Techniques feel more like something out of Pathfinder allowing each player a chance to customize their character every time they gain.experience. For a game that places the player characters against impossible odds and immortal gods, these actions make players feel like chosen ones ready to save the world for a little while.

Magic feels like it was written by someone frustrated that D&D warlocks relationships don't have more intrigue. Those with the Odsight must treat with strange beings called Outsiders for their spells. These relationships progress along two tracks with the total cost for a spell determined by the power of the Outsider and the intimacy of their relationship with the caster. The Outsiders are divided into different courts and their schemes help determine how players pay for their magic. Each spell has a Tithe and if a caster racks up too much Tithe, the Outsider stops answering their phone. This score can be reduced by the caster doing a favor for the Outsider or by the Outsider requesting one. I really like that it’s a two-way street here, because I love it when players suggest something awful happen to their characters to do in exchange for a neat story beat. I love these negotiations in any game I run and to have them supported in the fiction of the game is amazing.

The main criticism I level at Blackbirds is about its density. This book is decadent with full page spreads for spell descriptions and a second magic style that’s more spell based called wortcutting, but it felt less flavorful and much less defined than Odic magics. The game has a lot of systems that can feel a little redundant. Do we need a fate and a fortune system? Do we need weapon techniques on top of the techniques from paths and ones from mystical sources? I prefer unified systems because they tend to be easier to teach. The density also seems to work against getting players hyped for the game. It’s hard enough to get D&D players to read Player’s Handbook much less a big book like this. Ultimately, taking the time to digest Blackbirds is worth it for discovering a game with complex mechanics and themes but I can understand how some tables might get scared off.

Blackbirds is an excellent fantasy game full of intrigue, darkness and maybe even a little bit of hope for those who take the time to learn it.

If you found this review helpful, please consider purchasing the game through the included affiliate links to directly support the reviewer
Last edited: Nov 14, 2022
Click to expand...

Shoot. I was hoping for something a bit more streamlined.

And when talking about dark fantasy/grimdark, Check out The First Law setting from Joe Abercrombie, you won't be disappointed.

The art director for this book is now the art manager for WotC, Rob Sather. Fun fact!

Thanks for the note. Edit made.

Von Ether said:
Shoot. I was hoping for something a bit more streamlined.

And when talking about dark fantasy/grimdark, Check out The First Law setting from Joe Abercrombie, you won't be disappointed.

The setting sounds amazing. I just wish they had chosen a different game system to run it with, but at least it's not another 5e game.

Can we see this as Zweihander 2nd Edition?

Mercador said:
Can we see this as Zweihander 2nd Edition?
Click to expand...

The Zweihander Starter Kit (Coming out later this month) is probably better seen as the 2nd edition. There is a soft rerelease of some of the rules in that set

Von Ether said:
And when talking about dark fantasy/grimdark, Check out The First Law setting from Joe Abercrombie, you won't be disappointed.
Click to expand...


Ye gods, I'm waiting on at least a worldbook/campaign setting for that. In fact, I think I'd rather have that than an all-in-one game as I feel like they'd just try to shoehorn it into the 5e ecosphere which doesn't suit the setting at all.