A Look Inside The Unspeakable Tomes of the Malleus Monstrorum 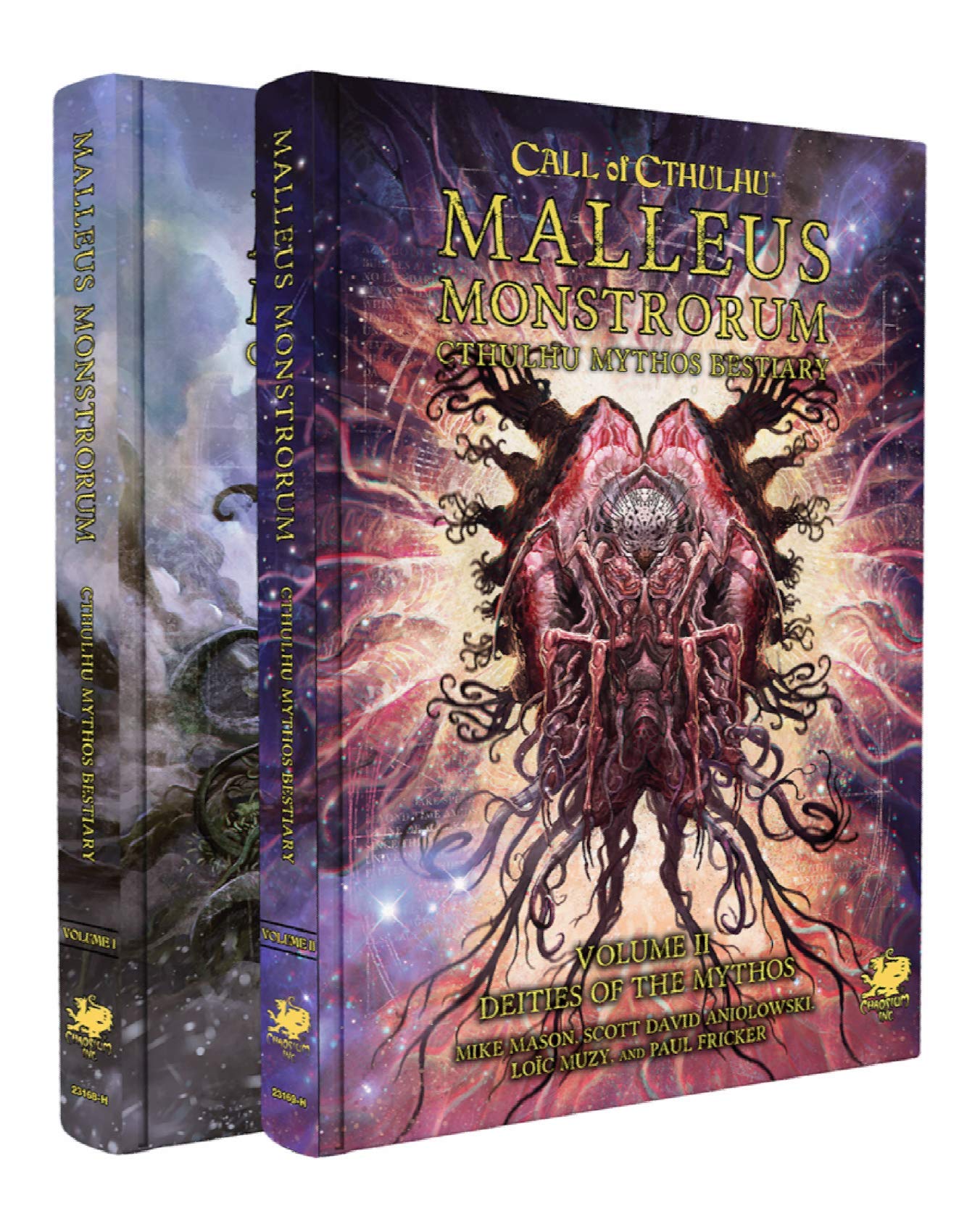 A monster manual for Call of Cthulhu always struck me as an odd proposition. It is not a game of heroic combat. It’s a game where players flee the monster until they can attack on their own terms, if at all. The game operates on a sense of mystery and the unknown. Players who can quote Deep One game statistics chapter and verse run the risk of deflating the atmosphere. The most recent release for Call of Cthulhu 7th Edition, Malleus Monstrorum, not only updates a 2006 collection of monsters, but doubles down with a two-book slipcase edition that greatly expands the previous edition. Chaosium sent me the books full of forbidden knowledge to review. Let’s see if they are worth the cost in money and sanity.

The first book focuses on the monsters of the Mythos. But before getting to the shoggoths, there’s a solid discussion how to make monsters more effectively scary. Keeping the creature in shadow and describing it without using its name is a classic Cthulhu keeper tactic, but the chapter goes into detail about how smells and tastes can convey ideas as much as sound or sight. Most players likely don’t know what a dead body smells like, but talking about a smell like rotted chicken or chunky milk can convey the revulsion of seeing a creature much more directly.

The chapter also offers design guidelines for new creatures along with a couple of pages of random charts for inspiration. This is not a game about meticulously balanced adversaries but the notes do talk about weaknesses and other ways that a new monster can be driven off if not killed. I found this chapter to be the most useful from a designer standpoint. There’s something of an unspoken assumption that a Keeper will use classic Lovecraftian baddies, but designing new ones fits the collaborative nature of the original Mythos as well as keep those players jaded by Cthonians on their toes.

The monster entries dig from all over the Mythos and the history of Call of Cthulhu. Each one starts with an evocative bit of prose, some alternate names to sprinkle in those in-game texts, and then the usual skills, spells and abilities. The more popular entries also get variants or unique entities that are a stand out version of the common creature. A few of the creatures also get a bit of boxed text to describe when they die and the investigators stand, bloody yet triumphant, over their bodies. I wish this was something they had done with every entry.

The first book also includes more common supernatural creatures and animals. There’s a short discussion about whether or not vampires and their like should be included in Call of Cthulhu, which has been an argument between Keepers for years. The book comes down on the positive side, saying that a regular old werewolf can cleanse the palate between Mythos Gods. I was hoping for a discussion on including what I’ve called “Scooby cases” as a Keeper, where the supernatural mystery is actually something quite mundane. I’m not sure if this book is where that topic goes, but I think it's an important discussion between Keeper and investigator. The first book ends with a pronunciation guide as they say these names around the Chaosium office, which seems to be as close as we’ll get to anything official any time soon.

The second book gets to the main course more quickly as there are dozens of Old Ones and Outer Gods packed into the Mythos contained within. Each entry sets up the creature as a main villain with an expansive write up over a few pages. Some of the big names get avatars as well, similar to the different aspects of the Crawling Chaos. A particular favorite is a modern Cthulhu avatar that preys on dreamers who are zoned out in front of the TV. These write up include the kind of cults the deity has worshipping it as well as some suggestions on the spooky abilities the alien might bequeath on those cultists in exchange. There are also some pronunciation guidelines for the things in this book as well as a few loose guidelines for designing new Mythos gods.

All in all, I felt the Malleus Monstrorum was a good addition to my Keeper resources, but I also hit what seems to be the target audience: experienced Keepers who are looking for ways to keep things fresh. If you want to inject a little of mystery back into your Call of Cthulhu games, consider picking up these volumes.

It's a monster manual for a high level D&D game, of course

(Seriously I have seen these books and they are awesome...)

how does this compare to Sandy Peterson's books?

Other than two lines coming close to express an actual opinion, this review is really well done.

That's indeed a great product. I'm part of the team translating the books and can honestly say, they have a ton of flair, to the point, where I'm borrowing certain ideas for my d&d games.

Windjammer said:
Other than two lines coming close to express an actual opinion, this review is really well done.
Click to expand...


A game book, particularly a sourcebook, is supposed to be useful, though. The review steps through the book and lists what parts of it are going to be useful to the person running the game. 'This has lots of fun creepy monsters and useful game design hints' is the equivalent of 'This book is really exciting and I couldn't put it down'. The keeper isn't going to read through this cover to cover, they're going to flip through the list of 100s of creepy-crawlies to give the players something they haven't seen before.

If you read book reviews in scientific journals, they're more like this.

I do have to say production values are getting high enough with a lot of these books they are starting to look like coffee-table books in and of themselves.

I picked these up in PDF early during the pandemic. While they're beautiful books, I can't imagine really using them during a game, because what's the point of giving stats to Mythos monsters in a game when you're actually not supposed to fight anything.
I would suggest maybe the better approach for the system wouldn't be a traditional monster manual, rather a manual of cults. Start with an entity, then provide example cultists for each, organizations that can be dropped into a campaign, names and descriptions of related tomes and other artifacts, detail a few creepy locations based on each old one.
We don't need stats for Cthulhu or Dagon. This isn't D&D.

Love the books. Grabbed the PDF early on and snagged the print books as soon as they were available.

Retreater said:
I picked these up in PDF early during the pandemic. While they're beautiful books, I can't imagine really using them during a game, because what's the point of giving stats to Mythos monsters in a game when you're actually not supposed to fight anything.
I would suggest maybe the better approach for the system wouldn't be a traditional monster manual, rather a manual of cults. Start with an entity, then provide example cultists for each, organizations that can be dropped into a campaign, names and descriptions of related tomes and other artifacts, detail a few creepy locations based on each old one.
We don't need stats for Cthulhu or Dagon. This isn't D&D.

I suspect it's a playstyle thing first and foremost--there's always some players and a GM willing to go down the road of running combat even in CoC--but maybe more importantly it serves the Pulp Cthulhu audience? I'm just guessing, but since I picked this and Masks of Nyarlathotep up, seems like they want to support both lines, and it also seems easy enough to do so without the stat blocks becoming a nightmare to process.

Yeah, they definitely took THAT angle...

Malleus Monstrorum Unboxing (Not Responsible for Nightmares or TPKs)

Bestiary Coming For Call of Cthulhu