RangerWickett said:
I mean, I feel like the climaxes of Z are more Hollywood than Cannes Film Festival.
Click to expand...

Okay, I get what you mean, but I feel Zeitgeist (and WotBS to a lesser extent) is more philosophical and thought provoking than a lot of the campaigns out there, and I really appreciate that.

(Now back to the thread in progress. Sorry.)

Tormyr said:
(Now back to the thread in progress. Sorry.)
Click to expand...

No worries; it's been pretty quiet in here. This is the most excitement we've had in a while.

Working on some map updates to incorporate a hundred years of "progress" and the incorporation of lore from yet another fantasy world. 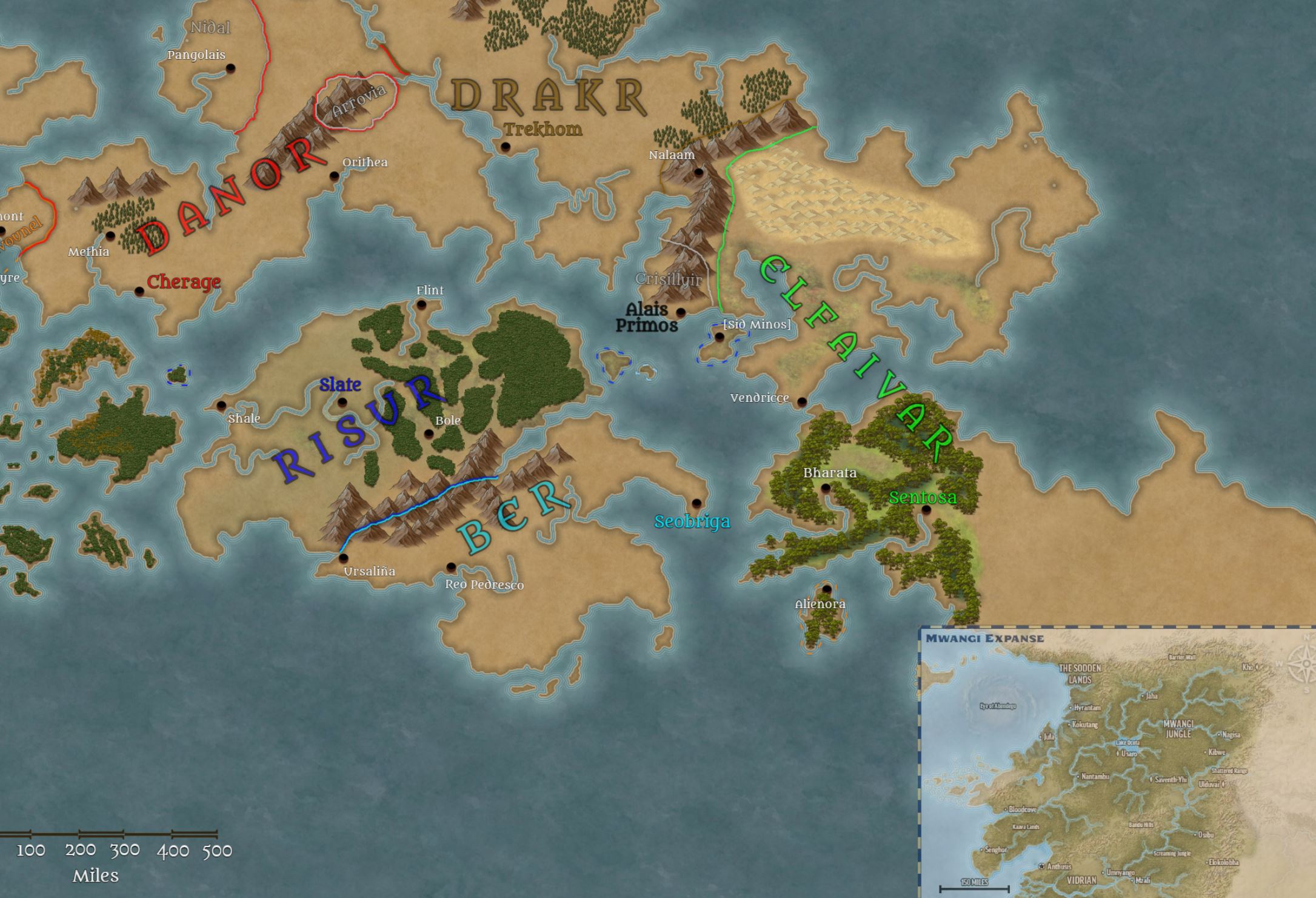 I actually rather like some of the regional details of that part of Golarion, but before PF2 it was mostly just a place with snake cults and giant gorillas.

I actually rather like some of the regional details of that part of Golarion, but before PF2 it was mostly just a place with snake cults and giant gorillas.
Click to expand...

It's definitely based on the book that just came out, written by multiple authors of color. I have almost no 1st edition knowledge of Golarion, and it sounds like I'm happier for it...
Last edited: Jul 8, 2021

skotothalamos said:
Welp, just after this plan, the group decided they wanted to try Pathfinder 2e.
Click to expand...


I guess we were ahead of the curve lol

I set up a device whereby the D&D group could spectate on the new Pathfinder group through a puzzle box that "shows you what you need to know," to give me time to learn the system before trying to convert their D&D characters over to Pathfinder. We ran Abomination Vaults (spoilers ahead!). I'd been seeding the idea for a while that the solar system had been put back together "wrong" at the end of Zeitgeist as a push toward some kind of epic finale someday. So when the finale of Abomination Vaults revealed that the whole dungeon was devoted to attracting the attention of a Lovecraftian soul-devouring god, I couldn't resist putting her on Nem, lurking at the edge of the solar system for the past century eating newly-dead souls on their journey to the afterlife.

So that gave me a way to retcon that the reason the puzzle box was showing the Pathfinder group to the D&D group was to reveal that information. So we merged the groups after Abomination Vaults and spent a few months wrapping up some D&D threads that had been left hanging. Some spoilers from Rime of the Frostmaiden and Descent into Avernus ahead:

The group had met a pair of Mind Flayer gnomes with a crashed ship, who I rethemed as renegade Gidim who had cut themselves off from the hive mind. This gave them access to their own Nautilus spelljammer, which they used to fly to the crashed flying city in that adventure to collect the flying-city orb thing whose name I've forgotten. With the orb thing in tow, they flew to Jiese to rescue the city of Sid Minos (which had been taken to "hell" when we did Descent to Avernus). The city flew back to the as-yet-unnamed Zeitgeist world and they dropped off people who just wanted a normal life, and then Sid Minos flew back into the sky, which is now our convenient Avengers Helicarrier city or maybe space station. Who knows? We'll place it where it's needed.

Whenever we were short a person or two, I ran one of those Pathfinder Society in-store scenarios with whichever mix of PCs the players wanted to bring, which was really adding to the Avengers feeling. Since so much of this had Golarion lore, I just kept adding small bits of Golarion lore to the various nations of the Zeitgeist world. Many of the 2e Pathfinder Society missions seem to be making up for the colonialist attitude of the 1e Pathfinder Society. Like half of the missions included "While you're there, please return this cultural artifact that we had in our museum to its culture of origin as a means of opening diplomatic relations."

This got me thinking that the Pathfinder Society in our world would have been founded by some of the remaining members of our old Zeitgeist party a few years after the end of Zeitgeist as the Great Nations of the world fell back into their old habits of nationalism and colonialism. The Pathfinders in this reality would be dedicated to correcting and countering the crimes of the many nations of Lanjyr.

With this feeling in mind, we started the Strength of Thousands Pathfinder Adventure Path a few months ago. It's set in a magical school in Pathfinder's fantasy Africa. I thought about trying to wedge it into one of the existing Zeitgeist nations, but then I decided that would do a disservice to the fantastic lore in the Mwangi Expanse book and hung it off the bottom of Elfaivar to the southeast of the map. We cooked up a Wakanda-like perception barrier to explain why no one knew about this in our Zeitgeist game. We decided the barrier had fallen during the Great Eclipse when all the rules of reality fell apart.

Spoilers for Strength of Thousands here: I knew that toward the end of this adventure path, the group would travel through a portal to another world, so I wanted to use that to push the vaguely-touched "fix the imbalance of the solar system" plot, so I had the puzzle box show our Avengers team these magic students for a while. They'll undoubtedly meet when the new characters reach a high-enough level.

Then we had a few weeks around Christmas with various people missing, so I went back to running Pathfinder Society one-offs. I found one where the group are supposed to track down an old Pathfinder stuck in a demiplane behind the "Door of Seasons," so I changed that character to one of our old Zeitgeist PCs, Cazara, trapped for decades in a demiplane built by Ekossigan of the Four Seasons. I fit in a thoughtform-ghost of Xambria, who had lived in Cazara's head for most of the Zeitgeist campaign. All of these callbacks were very popular and are pushing me to work on resolving the solar system plot.

So now I'm currently mixing and mashing together various adventures to build my new plot. The Pathfinder Adventure Path that just dropped today conveniently involves people going through gates to other worlds, which is ideal for me to adapt. The magic-school students will be the first to deal with it, so they can get up to level with the rest of the PCs.

That's a lot of recap, but the thing I'm most excited about right now is my own epiphany about the Zeitgeist setting: all of the worlds in the Zeitgeist solar system were stolen from where they belong in the universe by the ancient orcs thousands of years ago. If the Pathfinder Society I've built for this world is true to its own ethos, those planets need to be returned to their original solar systems. Stealing eight or nine planets to use as your own elemental batteries is surely unethical, especially when some of those planets had their own civilizations, like Av. Since they then also cut the Zeitgeist system off from the elemental planes, I'm working on a sustainability angle where the Axis Seal slowly drained the worlds of whatever elemental energy they had (which they couldn't recharge with no extraplanar connections). Obviously Avilona was the first to run out 300 years ago, which should have been a warning.

This will be the secret they learn when they open the gate and track down Cazara. Through the gate is the world of Castrovel, home to the Elves in the Pathfinder world. I'm going to set it up as a former sister world to Av, both formerly in orbit around Mishados, where the locals are close to solving the mystery of where the Eladrin world of Av went a few thousand years ago. I'm hoping giving Castrovel a blue sun and dropping some yellow frogs in will be a nice callback.

I have a vague notion that in order to fix this in the long run, they need to find Borne (I don't remember what happened to him), and lift up that Axis Seal and undo the ritual. I have a further notion that they'll need to defeat that Lovecraftian god on Nem, and in order to do it, they'll need to summon up their old 4e PCs who persist in this world as Clergy gods, but I also think the five Fey Titans could be avatars of them (maybe they have different avatars for different cultures around the world). That will push the callbacks all the way back to our first game together in 2009. I probably need to involve Ingatan's Refuge again to do some time-travel throwbacks.

Anyway... I'll let you know in a couple of years how that went!