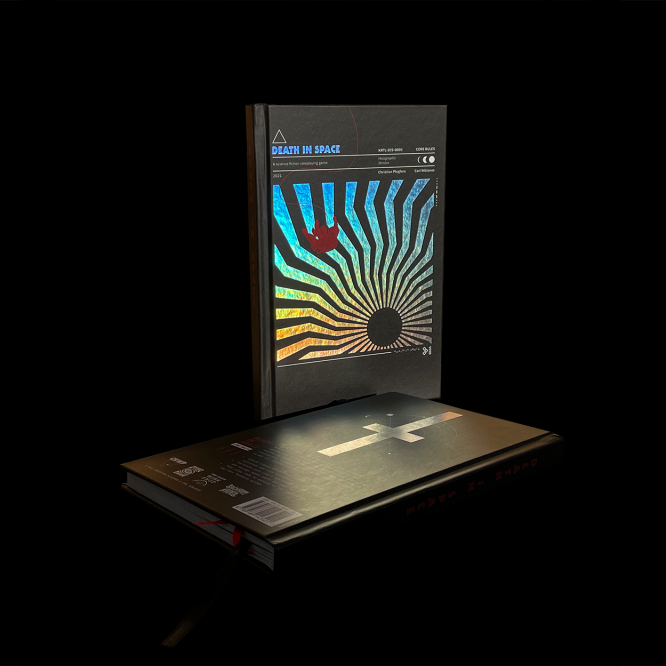 Far too often, genres outside of Dungeons & Dragons style fantasy get pigeonholed into one game. There are hundreds of riffs on swords, sorcerers and elves on shelves at gaming stories around the world, but put out a Weird Western game and there’s always at least one person who thinks all we need is Deadlands. Space horror is breaking that mold thanks to games like Alien and Mothership both games about how space is trying to kill you in hundreds of different, terrifying ways. Now comes Death In Space from designers Christian Plogfors and Carl Niblaeus offering a game set in a universe that’s not dying, it’s already dead and most folks just don’t know it yet. Free League Publishing sent along a review copy of this dark beauty of a book. Does Death In Space nuke the site from orbit? Let’s play to find out.

Death In Space takes place in the Tenebris System, home to a strange type of alien gemstone that’s become central to the expansion of humanity across the galaxy. Players take on the role of the working class grunts that keep the engines of the space empire moving. They are the scavengers that strip down old ships and abandoned colonies for parts and equipment. They haul that scrap to the Iron Ring, the giant space station that encircles the most important planet in the system. There they rub elbows with the miners that find the gems and the cultists that worship the dark between the stars. It’s also where they hear some disturbing rumors. Are the gems drying up? Is the universe collapsing? Is the only thing heard from the powers that fought over the system a strange static that sometimes whispers eerie words and phrases?

The first part of the book covers the rules and character generation. The basic system is a d20 + modifier system with opportunities for advantage or disadvantage based on circumstances. Players are given a roll or choose style setup along with short rules for all the stuff one might expect from a game like this, such as space combat or surviving a vacuum. These rules are very short and to the point with most of the heavier ones filling a page or two. (Combat, for example, takes four.) There’s also a section on building the crew’s space vessel that offers two campaign frames based on the choice. Players choosing the starship will be going on strange exploration adventures per usual while ones who choose the station are in for more of an intrigue laden affair.

The second half of the book included some more setting specific information, a starting adventure and a hearty stack of OSR-style charts and tables meant to inspire stories for the campaign. These range from random encounters in space to ones in the dingy halls of the Iron Ring station. This section also includes modifications to the starting vessel that players can make over time. Given the general vibe of the game and fragility of the characters, I would probably give my players some customization points right off the bat to make their shorter lives a bit more comfortable. While I expected adventures in the Firefly vein to be inspired by this book, the thought of running some kind of Deep Space Nine meets Alien story sets Death In Space apart from its fellow space horror games.

Another big inspiration for the game comes from MORK BORG. The game was laid out by Stockholm Kartell with a slick, dark look that feels similar to the yellow blasts of doom from their earlier work While other dark universes are still in the process of falling apart, Death In Space pushes forward into post-apocalypse in space. The book encourages a weird beauty and surreality driven by the end. If time and space is collapsing why should the laws of physics remain unbroken? This gives players a chance to mess with cosmic mutations given to them by the void and opens up possibilities for the GM beyond nasty aliens.

Death In Space is a dark game that stands out from contemporaries by embracing a rules-lite system and injecting weirdness into its setting. It works as a game for fans of Mork Borg who want to take it to the stars or for other space horror games that want to take things in more of a Event Horizon direction.
Click to expand...

robowieland said:
Another big inspiration for the game comes from MORK BORG.
Click to expand...

But certainly not Mothership, right?

I mean, the two games look very similar, not just aesthetically but in premise as well. Any thoughts on that? I've seen that bandied around quite a bit since this was announced.

I mean, the two games look very similar, not just aesthetically but in premise as well. Any thoughts on that? I've seen that bandied around quite a bit since this was announced.
Click to expand...

It says Mothership right there in the article. And Aliens.

Bunker said:
It says Mothership right there in the article. And Aliens.
Click to expand...

You're correct! For some reason I scrolled right past the first paragraph under the image. I blame my new mouse, but also my myself. But mainly my mouse.

eyeheartawk said:
You're correct! For some reason I scrolled right past the first paragraph under the image. I blame my new mouse, but also my myself. But mainly my mouse.
Click to expand...

No worries. If I had a nickel for every time someone said "but what about X" when I mention X in the first paragraph, I could fly to Gen Con every year in a golden helicopter.

I mean, the two games look very similar, not just aesthetically but in premise as well. Any thoughts on that? I've seen that bandied around quite a bit since this was announced.

Disclaimer: I've only perused the MS Player's Guide, so might be missing some of the implied setting. I do own the Death in Space book and have read it cover to cover a few obsessive times.

Other than the words "space" and "horror", I think Mothership and Death in Space fall into their own niches in the sci-fi TTRPG spectrum. DiS has more of a day-to-day survival aspect to it. Like, can we find parts for our constantly degrading spaceship to reach the next planet, more than can we escape this alien infested base before the reactor goes critical (though you can absolutely do that too with DiS.)

One simple sentence in the intro really sums it up: "Nothing is new." Known space is just a post-war junkyard where very little new technology is being manufactured, and things are constantly falling apart and in need of repair. So, you could add Mad Max to the list of influences for DiS, which I don't think applies to Mothership. Even your weapons and electronics can degrade and break after an intense scene in the game.

The other main distinguishing factor of Death in Space for me is the Void. The game is set in a (abnormally?) collapsing universe, and behind that is something that is caused by or caused it: the Void. It's possible to become corrupted by the Void or gain supernatural abilities (cosmic mutations) from it. Bizarre creatures can spawn from it. Cults worship it. It's what whispers behind your ship's radio receiver static as you drift through deep space.

The coolest thing mechanically, which the review above skipped over, are Void Points. If you fail a roll, you get a Void point, up to four. You can then spend Void points to give yourself advantage (roll 2d20 and take highest) on a roll or activate a cosmic mutation. However, if you fail your advantaged roll, you then check to see if you gain a Void Corruption: take a d6 and roll higher than your remaining Void points or else roll on the Void Corruption table.

The intro adventure really highlights the philosophy in the game as well. The players start by arriving on a space station* to collect a ship they just bought, but it's currently inoperable and in need of repair, out of fuel and won't be released to them until they pay the docking fees it's accumulated. The station is full of interesting NPCs, including two factions in a stalemate with each other, and a third on its way to kick everyone's butt due to the stalemate. That's it. No planned encounters, no overall plot. Just a situation the PCs have to engage with and decide on their own resolution. It might be purely social deal making, or devolve into combat, both or something else.

I really hope future content embraces this sort of adventure design and avoids an endless parade of alien infestation/reactor's going to blow scenarios, which I have a feeling Mothership is going to be rife with.

The two games are also vastly different mechanically. DiS is a very rules-light d20 game, where Mothership is a d100 roll-under game that is absolutely crunchy in comparison.

*The space station is actually part of the Iron Ring, a collection of thousands of ships and stations, mostly derelict, orbiting the planet where the "Gems" that kicked off the war were mined. You could potentially set an entire campaign on the Ring, similar to a Bablyon 5/Deep Space 9 setting.

I've read both and both are great little games. DIS supports a bit more of the daily grind and a built in excuse for why the PCs are getting into trouble as they need to upgrade and fix their home base/starship. The Mothership adventures, though, offer great stuff for what happens when the Void becomes more of a thing.

The Void is really what splits the two for me. There's weird stuff in Mothership but it always feels like it's some alien tech that you accidentally push a button on somewhere. DIS feels much more like the universe is collapsing and the laws of physics have left early to beat traffic.
Last edited: May 20, 2022

I have and run Mothership regularly, and I own the PDF of Death in Space (waiting for the physical copy) and am prepping a campaign. These are two rather different takes on the genre. You could argue they fall under the umbrella of space horror in the same way Call of Cthulhu and Vampire: The Masquerade are both horror games....yes, sure, but there's not really a comparison going on.