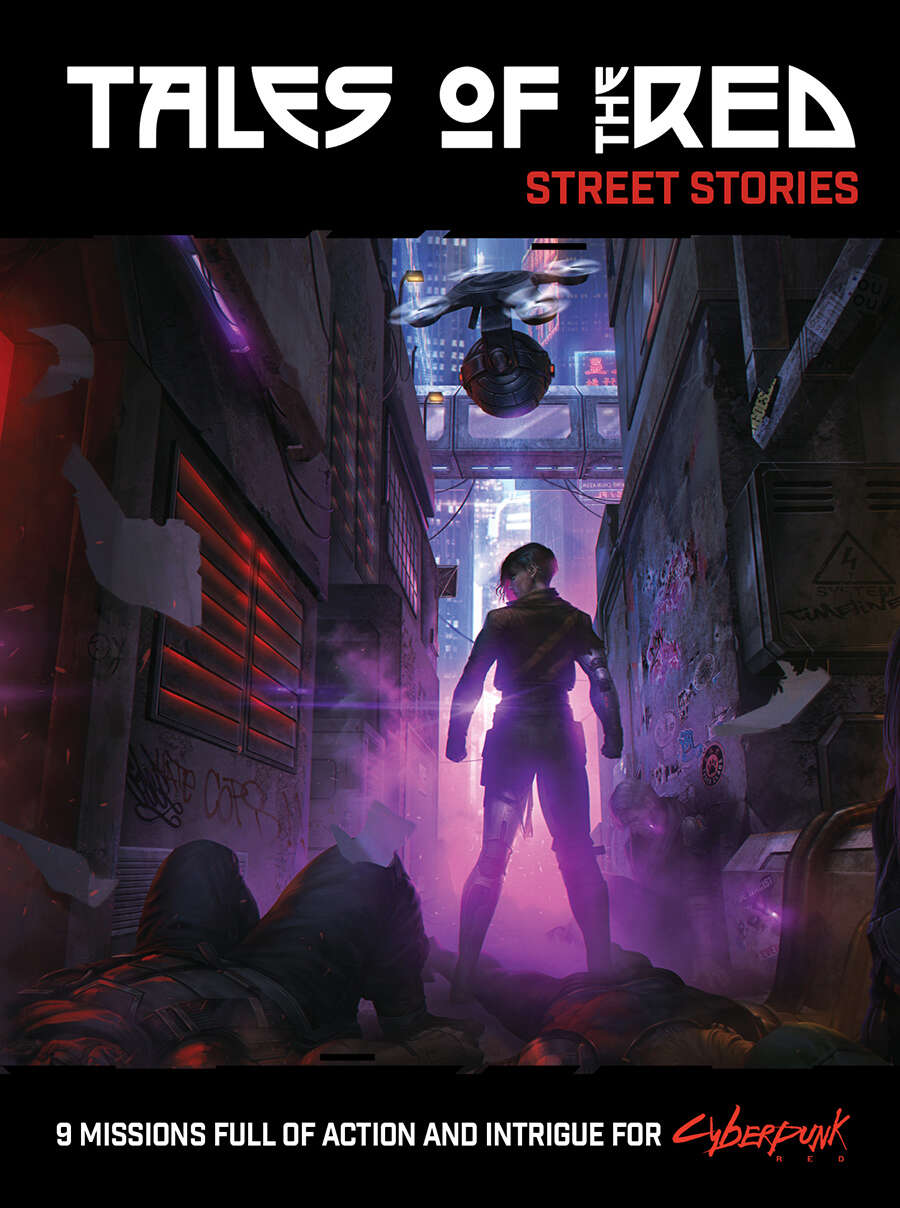 The word “cyberpunk” has different meanings based on the medium. In film, it connects to films like Blade Runner, The Matrix and Robocop that ask questions about where humanity and technology intersect. In tabletop gaming, it connects to thrilling techno-heists full of twists and turns where nobody can be trusted. When I received a review copy of Tales From The Red: Street Stories from R. Talsorian Games I expected nine stories where the shadowy businessman who hires you tries to kill you instead of paying you, run-ins with Night City cops and black sites full of high tech security. These stories do have those elements, but several within the collection deployed them in new ways or ditched them altogether. Which of these tales stand above the rest? Let’s play to find out.

Tales From The Red: Street Stories feature nine adventures for Cyberpunk Red from Fran Stewart, Jay Parker, Melissa Wong, Mike Pondsmith, Monica Valentinelli, and Trace Wilson. The art matches the concept art style featured in the original book as well as a few of my favorite cyberpunk art bits: fake in universe ads. The stories are mostly episodic, though the book ends with a two parter and one adventure is a sequel to earlier stories told in the Data Pack. A few adventures also connect to characters and locations seen in the original Cyberpunk 2020 and in the video game Cyberpunk 2077.

The tales all use the beat chart system outlined in the original rules. At its heart, this style of adventure writing alternates between action beats and investigative scenes, but the stories here find ways to riff on that basic structure. A few have alternate pathways depending on the player's approach. The adventures take into account the broad playstyles seen in these games. Sometimes players want to talk, sometimes they want to sneak and sometimes they want to blow up a city block. I like the structure of the adventures as an improvement from the short screamsheet writeups in earlier books.

So which ones stand out and why?


A Bucket Full of Popcorn-Flavored Kibble​

This is my favorite adventure in the collection. The players are hired on as extras in a movie filming about a historical event in Night City. Word gets around that they are the type to do discrete work and various members of the film crew ask them to do favors. This adventure felt like a fun collection of side quests that offered some big ways to affect how the main storyline plays out. They might not come out of the adventure as big stars, but they’ll have made some friends and enemies in the entertainment industry that will impact their lives in Night City.


A Night At The Opera​

One of the neatest things about Night City are the themed street gangs. This adventure features one of the strangest; the Philharmonic Vampires. These ultra goths throw the players in the middle of a fight at the titular opera house and then drag them into a techno vampire hunt that would make Blade jealous. This adventure is a great one to run during spooky season or perhaps as a one shot for your Vampire: The Masquerade crew to play in-character.


Drummer And The Whale​

This adventure sticks the closest to the classic cyberpunk heist format but its ultimate location gives it a bit of novelty. The action takes place in and around the harbor with the players tracking down some wrecked containers full of valuable merchandise. Throw in a firefight with a rival group of scavengers with some short but brutal rules on what happens in a firefight inside a submerged area and you’ve got a tense run that will put veteran cyberpunks on edge.

One of the big plot points of Cyberpunk 2077 are engrams; digital copies of human personalities uploaded to computers. This adventure puts them front and center along with a cameo from a character from the video game. It also comes the closest out of the set to dealing with the strange ramifications of technology that the other cyberpunk stories do, leaving the characters to wrestle with a moral choice in the process.

The last two stories are a two-parter that pit the players against a classic cyberpunk villain: the superhacker with a plan to take down a corporation. The stories do a good job humanizing the agents of the company and put the players in an almost superheroic pickle; save the people behind a multibillion dollar corporation or side with an agent of chaos who doesn;t care about hurting people to finish their agenda?

Tales From The Red: Street Stories offers some great adventures that link to the past and the future of the Cyberpunk universe.

If you found this review helpful, please consider purchasing the game through the included affiliate links to directly support the reviewer
Click to expand...


You gave us an overview of six, what happens in the other three?

sevenbastard said:
You gave us an overview of six, what happens in the other three?
Click to expand...

I didn't feel strongly about the other three and my word count was rapidly running out.

The fifth adventure Haven't Got a Stitch to Wear, is quite interesting as it shows the difficulties of the supply chain in the Time of the Red.

I played shadowrun back in the 90s (3rd ed?) But I'm not totally fond of that system. I've been looking for a good cyberpunk / dystopian tabletop game. Are there any others you can recommend?

Fallen star said:
I played shadowrun back in the 90s (3rd ed?) But I'm not totally fond of that system. I've been looking for a good cyberpunk / dystopian tabletop game. Are there any others you can recommend?
Click to expand...

Fallen star said:
I played shadowrun back in the 90s (3rd ed?) But I'm not totally fond of that system. I've been looking for a good cyberpunk / dystopian tabletop game. Are there any others you can recommend?
Click to expand...

Neon City Overdrive is my favorite small press cyberpunk RPG
I also like Cyberpunk Red though it took a while to grow on me.
Lowlife 2090 has some interesting ideas going on.
And look for my CY BORG review soon.