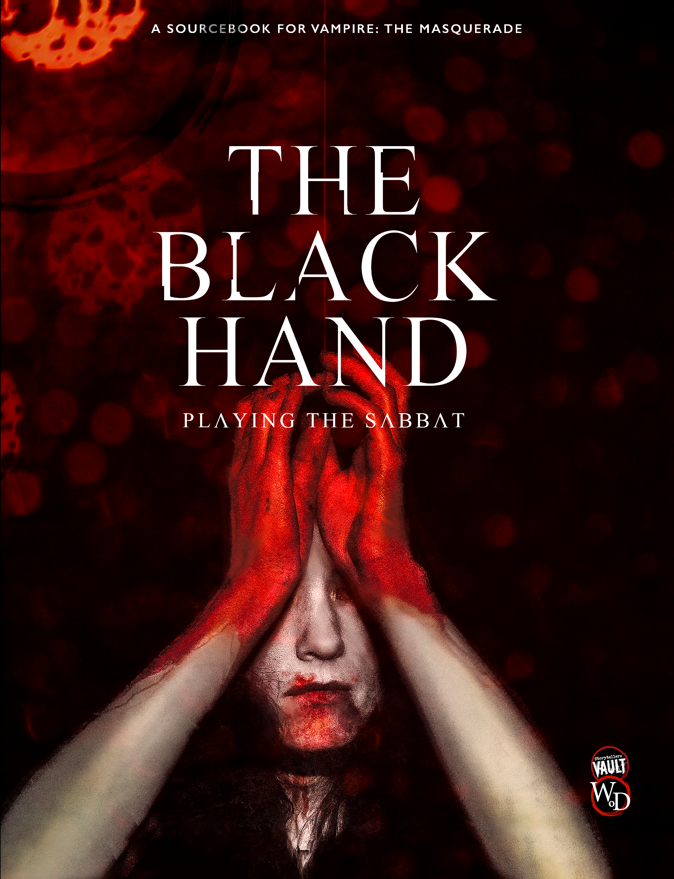 In my Vampire: The Masquerade games, The Sabbat always functioned best as antagonists. Even as they grew from the whispered boogeymen of the first edition to the dark mirror image of the Camarilla as presented in Vampire Revised, I didn’t have much interest in ever running a full Sabbat game. There were plenty of opportunities for double agents and turncoats in my games, but a full-on centered around a pack took the game away from the themes and stories I enjoy telling. The recent Sabbat: The Black Hand moved the sect back into the realm of NPC antagonists rather than providing a clear inside view of what changed and what stayed the same as these vampires withdrew from city management to focus more on the pack structure. The Black Hand: Playing The Sabbat is a Storyteller’s Vault release that looks to bridge the gap between the Sabbat of previous editions and the blood cultists of the modern day. I received a review copy after talking with one of the authors and expressing interest in how they reconciled these differences. Did this book of blood burn up or bleed out? Let’s play to find out.

Designers Rachael E. Judd, Khaldoun Khelil and Saskia Liddick put out a book that hews very closely to the look of official V5 books. Khelil has some credits on the line and employed some of the artists that have worked in the books to give it a very professional look. Materials on sites like Storyteller’s Vault or Dungeon Masters Guild can vary in production quality, but if you held up a page of this next to one from an official book I’d be hard pressed to tell the difference.

The book outlines three general styles of play. Nomads are packs that wander Near Dark style from domain to domain and cause trouble. The coven is a pack that’s installed somewhere with a longer goal, such as overthrowing a Camarilla Prince or to hold onto feeding grounds in a Sabbat territory. Reclaimers are purpose-built packs for a very specific reason, such as taking out a powerful ancient vampire. Each of these structures offers a little something different from the usual intrigues expected in V5 even as there are opportunities for the backstabbing and bursts of violence one expects in the genre.

The book keeps things within the humanity system employed by V5 rather than switching out the number for a path rating. Restructuring the game into chronicle tenets and personal convictions was one of the most interesting parts of the new system because it allowed individual tables to define what morality they wanted to wrestle with at the table. Instead, at least one conviction must be tied to the path the character follows.I like this choice because keeping track of humanity was hard enough for an ST, much less a game where each player might be following the same path.

Touchstones also receive a modification along these lines. Rather than a person that connects the vampire to the larger world, each touchstone is a ritual that has important significance to the vampire. I like how the rituals are shifted into a heavier significance here. Things like the Fire Dance have been around for a long time but have mostly just been there as flavor. Now there’s some mechanical boost to encourage rituals to be performed in play as well as a chance for the player to personalize the meaning. Two characters might both enjoy the duels of Monomacy, but one sees it as a chance to display their power for Caine while the other might see it as the ultimate expression of the Beast.

As a player’s guide, there are also several player options available, such as new loresheets, disciplines and even advantages tied to specific paths. It’s a little unclear how characters purchase path advantages. Are they are progressive like Disciplines or players can pick different levels like Loresheets? A lot of these options are marked as Sabbat only, though the discipline options seem like they could be taken by non-Sabbat groups. At my table, I might have players who see a cool power like this talk about that one time they drank a little Sabbat blood to get it. It’s only one drink, what could possibly go wrong?

The book ends with a discussion on safe play and safety tools. When these sorts of things entered the discussion there were some old school World of Darkness types who huffed and puffed about how in a Real Sabbat Game there was no space for this stuff. Everyone knows what they are signing up for and if they get offended or shocked to just deal with it. It’s nice to see the authors here understand how harmful an attitude like that is. Even dark games full of vampire on vampire violence should clearly define limits and stakes before play and be willing to change direction within play. So many games fall apart because the players and the Game Master don’t communicate. Having as many tools as possible to use to communicate those goals is ultimately for the best.

Though this book frames itself as a player’s guide, I will still find it useful as a ST resource. Looking out from within the Sabbat depicted here helps me to understand why they do things they do. Strange rituals and boats of being an antitribu are fine for a mirror universe version of vampires, but Vampire: The Masquerade has never been about clear morality. The more players might have sympathy for the devils of the Sabbat, the more interesting their decisions become.

If you found this review useful, please consider purchasing this title via the embedded affiliate links to support your friendly local game reviewer.
Click to expand...

I am a game designer with over 15 years worth of game credits and industry experience. My work includes licensed games based on worlds like Star Wars, Star Trek and Firefly, classic game worlds like Dungeons & Dragons and Shadowrun and my own creations like Camelot Trigger and Save Game. I play a wide variety of games as part of Theatre of the Mind Players and have been the guest of honor at several conventions. I live with my family in Wisconsin, born near the heart of RPGs (and just a few short years younger than they are).
O

Counterpoint: those of us who used to play sabbat games have been severely undeserved. And they've fundamentally changed old lore and terminology therefore invalidated years of lore. The word antitribu means something so fundamentally different that I would have to change 20+ years of continuity to make it work.
Last edited: Aug 7, 2022

I much prefer them as a scary antagonist group, and feel that making them playable dilutes the notion of them being ‘inhuman’ monsters. It also undermines the creeping loss of personal ‘Humanity’ as a fundamental theme of the game. That said, I like the playable availability of previously associated Clans such as Lasombra and Tzimisce, now exclusive of the Sabbat sect.

I much prefer them as a scary antagonist group, and feel that making them playable dilutes the notion of them being ‘inhuman’ monsters. It also undermines the creeping loss of personal ‘Humanity’ as a fundamental theme of the game. That said, I like the playable availability of previously associated Clans such as Lasombra and Tzimisce, now exclusive of the Sabbat sect.

To each their own but I think we can reveal things about humanity by watching what happens when we remove it. Is it possible for a monster to have feelings? Is flawed idealism dangerous or still useful? If the sabbat as sort of right aboutnwhat is going on, how can they enact meaningful change when their sect also has a range of psychopathic killers? In many ways the sabbat are more open and honest and communal (at least in old lore) than the backstabbing spineless politicking that goes on in the camarilla. Leastways that's how I see it, ymmv. Tbh the thing that upsets me is that if I say for example 'Lasombra antitrinu' to someone who has read only this book and 5th, it means something opposite to what I mean. Antitribu now means 'of the sabbat' whereas before it meant 'opposite sect than expected'. It's small retcons like this througout that just make me feel like its reboot disguised as the same old game and ticks me off. But that said it's up to you. I am not gonna tell you how to play a game.