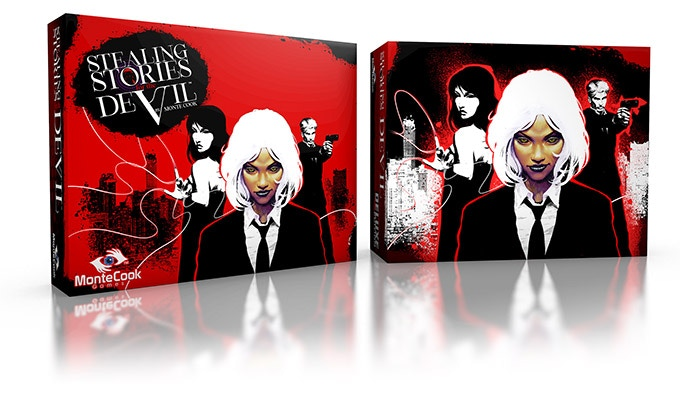 Heists are at the heart of many of our most popular stories and games. Bilbo is tapped by Gandalf for his skills as a burglar. What is a dungeon crawl if not a fantasy version of a bank vault heist? Shadowrun endures because of its powerful central conceit: what if we could use magic and machine guns to steal things? Monte Cook Games recently put an advanced copy of its heist game, Stealing Stories For The Devil, in my hands. The game is an interesting mix of low prep and high concept. Does it pull off the job with a third act twist? Let’s play to find out.

This boxed set contains three books, a set of dice, a deck of cards and a treasure trove of location maps. Gameplay is built into a three act structure like a heist movie. The first act is prep, the second act is execution, and the third act is the escape. Character creation is very simple: players choose a couple things they are good at, one thing they're bad at, a few specialties and they are off. These are rated as die types, like Cortex or Savage Worlds and rolls are against a static target number.

The deck of twist cards on both sides is my favorite mechanic here. Each player gets three cards to pull the narrative to their advantage. These can include the usual heist tropes of having an inside man or revealing a previously unknown skill. The GM has their own set of cards too, though they are more open ended. They also have The Tun card, which represents The Big Twist in the heist story that threatens to ruin all the fastidious planning and slick banter. Not only does this let the GM set the pace of the game, these cards also represent the XP for the session. The more twists everyone plays, the more XP the players get.

In theory, the GM picks out a location map as the players make characters, then when everyone is ready, they plunk the map down on the table and everyone goes around talking about the goal of the heist and the various obstacles they must overcome to get there. Often ,the heist is not for the fabulous treasure of jewels or diamonds one might expect. It might be a softball trophy, a deck of cards or even a piece of chewing gum currently being used by a low level employee in the secure facility. Why?

Well…this is where we get into SPOILER territory. This and the rest of the discussion will likely dig into the high concept backstory of the game. For those who leave here, I liked the game and the twtists, even though I don’t know it lives up to the zero-prep claims on the outside of the box. It feels like it would be a fun, short, weird campaign either on its own or as an alternative to something more traditional when the full regular group can’t get together.

Stealing Stories For The Devil is a heist game…but one in the style of meta heist stories like The Matrix, Looper, Tenet and Inception. The players are time travelers from the far future who are stuck here because the planet is covered in improbability zones that prevent the players from going home. By stealing the items they unlock the zones and get a little closer to home.

Players are called Liars because each class has a specific way they can rewrite reality. Instead of a flashback mechanic, the player literally tells the world “No, I need that guard to be somewhere else” and it happens. Implausible lies can cause stress which takes the Liar out of the scene. It’s an interesting way to work the genre and keep things fresh for players who get bored stealing the Mona Lisa every week.

The box includes a pre-set campaign as well that features ideas for heists and a running plotline featuring the titular Devil. Is he a fellow time traveler? Is he the reason the timeline is messed up? Could he be the actual supernatural Devil in an otherwise sci-fi heavy setting? Those answers are left up to you. The campaign reminded me a lot of mystery shows like Lost where the focus is on the episodic element and the Devil is a mysterious character who shows up for a scene, smirks about all the things the main characters don’t know, and leaves. Tables that enjoy this style of storyline will find the campaign useful but I know just as many players who would throw the Devil into the sun after their first encounter.

But it also feels like a hurdle to the concept of a zero prep game. This is more of a low prep, purpose built game, compared to something like Fiasco or even Dusk City Outlaws. The game goes into the backstory of why the characters are here, how they got their powers, and who might be their hidden enemies. If your players are into the idea of weird twists and narrating implausible success stories, this game is an excellent fit. If your group wanted something more grounded or merely cinematic, you might want to approach with caution.

If you want to run a high concept heist storyline that goes unexpected places, Stealing Stories For The Devil is an excellent choice.
Last edited: Nov 26, 2022
Click to expand...

I've been playing it on and off since the Kickstarter rewards were getting fulfilled. Probably one of the most usuable and satisfying heist systems devised for a TTRPG. There are also some mechanics that might inspire D&D-minded people, like the way group actions ('Harmony') synergize with something akin to the D&D 5E Advantage rule. I also find the damage system really elegant; it adds special dice to your dice pool, so players have a tangible reminder that their character is operating below capacity. It really does something with the psychology of players compared to, say, ticking off an injury box on your sheet.

The only negative in my playthroughs has been the ultra high concept science-fiction premise that surrounds the heists. It's one thing to say 'you have cool techno-magic powers to bend reality' but quite another to say 'you're a post-human time traveller who lives on a generation ship and is essentially puppeteered by self-aware cloud AI'. Some player groups will just shrug and focus on the heist but I've had players who feel like they have no grasp on who their character is, what motivates them, how they relate to the world and characters around them etc. They felt it was just too alien and the books don't give you a lot to work with when players go really in-depth about the world-building.

But again, it's just the wrapper that's easily ignored. I could imagine reskinning the whole game and have players be, say, Mages from Mage: The Ascension without changing anything else.

Great little game, easy to play and a breeze to run... destined to be something people will rediscover in years to come.

I thought this sounded like a great game. Thanks for the review!

This kind of reminds of a game I read about 5+ years ago called, "One Last Job."

As I remember it, the characters were doing 'one last job' before they officially stop being criminals. The game starts after the heist has gone bad. The objective was to show how it went bad and to survive the fallout. I am not sure if the game was ever published.

Fitting Characters into the Campaign (Cyberpunk or Other Games)